In a passel of 10 kids, one learns the fine points of foraging, opportunism and guile. 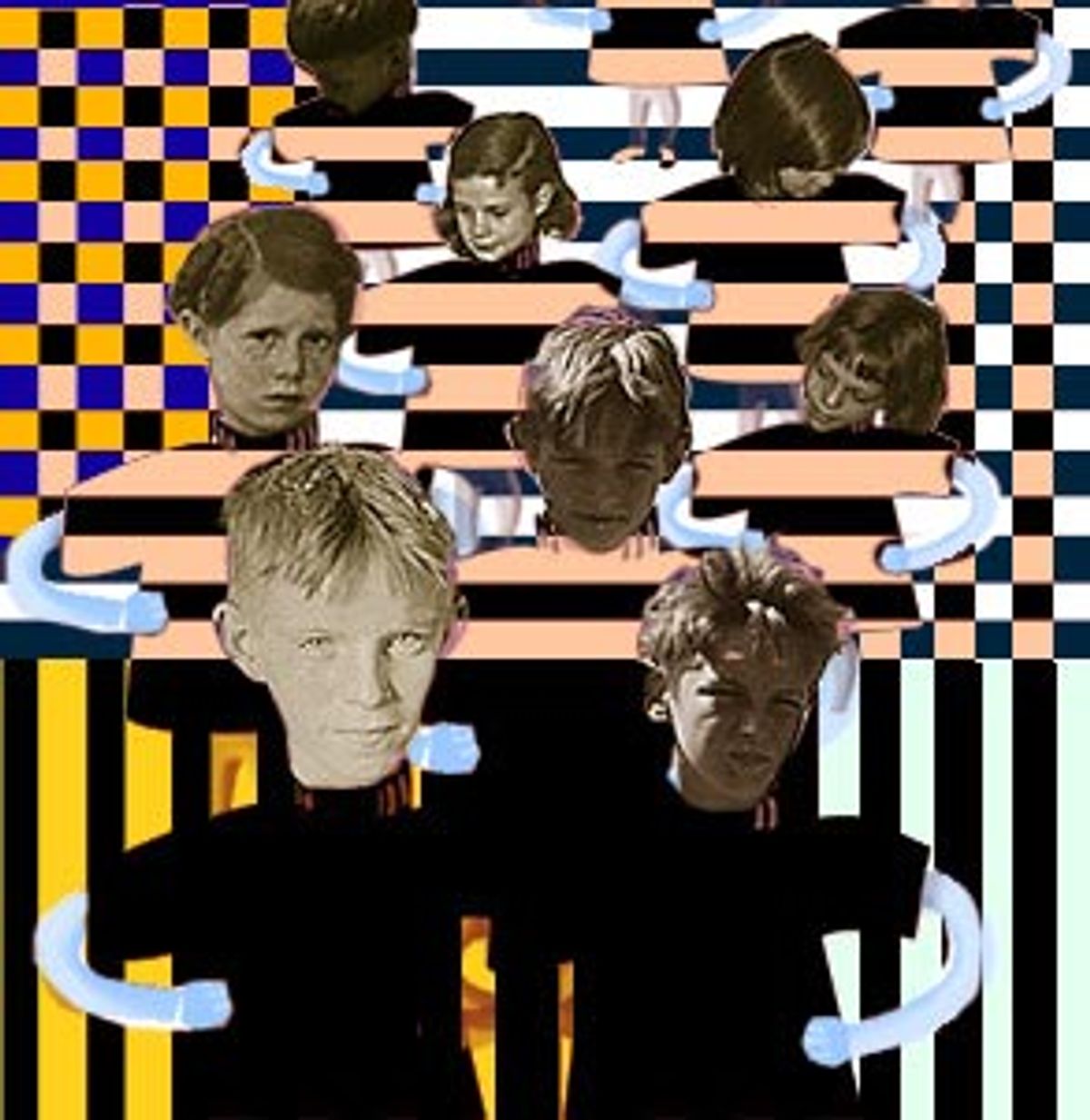 With five brothers and four sisters living in one house with two parents -- a great archetypal urban Irish Catholic microcosm -- I was instructed early in religion, values and common sense. We saw the importance of prioritizing and of getting along with others. Nothing teaches cooperation, planning ahead and the cutthroat side of togetherness like a bathroom and a half for 12 people -- especially with somebody in the shower. In my family, "I'm in here" was an existential absolute, and "Go upstairs" and "You have to wait your turn" were pieces of advice full of Life Lessons. We also were told, "Don't be stupid" and "Be good."

So what did I learn from earliest youth? Well, I learned crime.

Except at first it was more like foraging, a kind of genetically qualified hunting and gathering process. If you needed something for school -- a copy of "A Separate Peace," for example -- the odds were it was already in the house someplace. Try the attic.

It started with my parents -- my mother, to be more precise. Margaret Mary Coleman Donnelly raised 10 children who neatly filled out the entire baby boom demographic -- her first was born in 1946, the last in 1963 (and I, in the peak year of 1957). She initiated the foraging-borrowing-theft evolutionary process by strenuously avoiding the purchase of new clothes. Her first child was a girl who needed new clothes, but -- prudently -- the next was also a girl, and that first set of hand-me-downs provided a model of efficiency that lasted a quarter-century. A first son followed the second girl, and he was followed by three more boys before my mom alternated for nearly a decade to round out the clan to 6-4, advantage boys.

By the time I came along, the eighth of 10, neighborhood adults could identify us more reliably by our clothes than by our faces. Shirts and coats, especially kids fashions in the '50s and most of the '60s, didn't change much, but I do recall wearing an ancient sweat shirt in seventh grade that had belonged to my brother John, who was eight years older than I. It made me look like Dobie Gillis in the Age of Aquarius.

We were sort of a socialist dictatorship in which Mom set all the production quotas and allocated the harvest. But we had no ambition to be a classless society -- everything was executed in strict birth order. My mother's approach was simple: From each according to his growth spurt, to each according to his grade. Excepting only two -- the oldest boy and the oldest girl -- we all wore hand-me-downs at some point, and there was a rough balance of nature to it. About the time Bobby outgrew a coat, Timmy would need one -- that was the theory.

This enduring cycle taught us the law of unintended consequences, better known in my family as the Turtleneck Rule. My mom liked turtlenecks, and bought them for us on our birthdays. None of us wore them, which meant they never wore out. So the least popular clothing was the most common. As we "outgrew" them, the turtlenecks would be passed down in the twice-weekly Redistribution of Resources (read: Folding of the Laundry). By the time Mom gave up there were enough turtlenecks to fill the huge blue barrel she kept in an attic closet for Goodwill donations.

Hand-me-downs, and my mother's habit of calling us by other siblings' names (I was JohnBobbyTimmyChrisPaul), taught us that all property -- even names -- is fungible in the right circumstances. This knowledge was supplemented, as so often is the case, with lessons about opportunism. If you want an Oreo, take it now because even a new package could vanish without warning.

We also learned a primitive, feudal kind of entrepreneurship: My mother loved Mr. Goodbars, and would futilely attempt to hide them under a chair in the living room. She really loved those things -- at Halloween, we would empty our candy in separate heaps and trade (anything with coconut was in play), but the Mr. Goodbars were her tribute. Her carpet, I suppose. So, like rebellious vassals or proto-capitalist commissars on the collective farm, we watched for our opportunities and we took 'em.

Opportunism, naturally, led to guile. The key to getting into the bathroom as soon as someone came out was proximity. If you really had to go but somebody was already in there, and you "went upstairs" to find somebody else already waiting, the trick was to linger closest to the door. For some reason, we didn't wait in line in my family -- nobody wanted to stand next to a sibling who had to go. So the bedroom for the oldest not-yet-off-to-college -- the only single room in the house -- was the best place to wait. Mom and Dad had a hands-off attitude about some of the pack hierarchy, but they had strict rules of decorum: Nobody could charge into the bathroom and pull you out, especially not if the door was closed.

We learned justice could be fickle and concerned with inessentials. One April 1, Timmy put salt in the sugar bowl. My father watched me pour my usual five heaping teaspoons onto the Rice Krispies with great disapproval (he knew more about dentist bills than I did), and when I winced at the shock of salty milk, he saw the chance to teach me a lesson: He blamed me for making the cereal too sweet, barking, "You took it, now you eat it!" I literally couldn't speak, the taste was so nasty, and it was only Timmy falling all over himself that gave it away. To this day, I am convinced that, without divine intervention, Dad would have actually made me eat the stuff, on principle.

And, like all good criminals, we also learned the fine points of law. With one television (black and white until after the moon landing) in the house, the troop of us would arrange ourselves in rings across the living room, six or eight kids at a time for three chairs and a couch. The big chair was Dad's, of course, and Mom had a corner of the couch. But for the rest of us, it was first come, first served. If you left your seat, you had to call "saved" or you lost your claim. If your seat was saved, it was yours when you came back. This was an enforceable contract -- even Mom would back you up (unless you got on the phone). The fine print was that you had to call "saved" before you left the chair -- you couldn't do it from across the room while leaving (reinforcing that lesson about foresight we learned from the bathroom).

I committed my first memorable crime when I was about 4. I was foraging in the attic, where my four older brothers slept. I found one of those little tins of shoe polish, the kind with the bird on the lid. I remember vividly the cavalcade of revelations: What is this? It can be twisted open! The smell is enticing! And, perhaps most important, it is black and gunky!

So I decided to write my brother's initials, which I did: "CD," big, black and gunky. (They're still there, faded into the plywood, considerably smaller than I remember writing them.) I felt satisfied -- problem solved, a job well done. I put the tin away and resumed playing, eventually wandering back to my room. Forgot all about it.

About an hour later, I heard my brother Bobby, who was a high school football player at the time, bellow: Who did this to my wall?!?! And he rounded on my brother Chris, a bookish 9-year-old: "Why did you write your initials on my wall!!??" This soothed me. It confirmed my judgment. Poor Chris started to cry and sort of mumble, and I remember him saying plaintively, "But I didn't do it."

Bobby wasn't buying. It was an open-and-shut case.

Maybe 15, 16 years later, I started telling the story to college buddies -- not that I'd ever forgotten it; I hadn't thought much about it, but suddenly it made for a nice anecdote. I even told my brother Bobby once; we were in a bar, and he laughed a little. Not a big deal.

Finally, when I was well past the age of 30, I finally told the story in front of Chris at a Christmas dinner. I didn't even know he didn't know, but the expression on his face was priceless. It hadn't occurred to me that this was his story too. I don't know if his confidence in a moral universe ever recovered.

Alas, lost innocence! I might have pursued a life of crime outside of my family had I not discovered the hard way -- via the Thin Mint Incident -- that crime does not pay.

My sisters Mary and Anne sold Girl Scout cookies in the days when my brother Bobby, the football player, had a part-time job and thus some pocket money. A generous soul, he bought the family a box of thin mints, and purchased one for himself, which he stashed in his room. I had never tasted thin mints but I learned to love them -- so did Chris, Timmy, Bobby, Anne, Michael and Mary. (I think Patty, Kathleen and John were away at school.) So the family ration didn't last long.

But -- there were more. At this point, Bobby, as the eldest, had the room near the upstairs bathroom all to himself, so when he was out, there were no witnesses. First one, then two, then a handful disappeared. Soon there were just a few left, which, in the kitchen, was the line never to be crossed. If you didn't actually finish the box, then you had left some for somebody else. I believe I left three.

This rule, I learned shortly before dinner that night, did not apply to personal property (a new concept for me). Bobby had earned massive cred from Mom because he had used his own money to buy Something for the Family, and, well, somebody had eaten all his thin mints.

We had been scheduled to go on some family outing -- the movies, maybe -- and now no one could go out until the culprit came forward. The Inquisition began.

No witnesses. Many suspects. Inconclusive circumstantial evidence. So my parents tried direct interrogation: Mary, Anne, then Timmy. They claimed innocence. I denied everything. But somehow -- I suspect Chris, who wasn't home at the time the crime was committed, and thus free to kibitz on arrival -- suspicion swung back to me. And stayed there.

It became a siege. I read a book. Dark glances from multiple siblings. Bobby glared. I pretended not to notice. The time for the movie approached. My father, who had a low threshold for this sort of thing, went outside to avoid using inappropriate language.

I think it was Patty, the oldest home from college for the weekend, who used a sweet tone to talk me into confessing. "OK, it was me." When everybody knows you did it, confessing to a crime is not satisfying. But it is better than the alternative -- emotional lynching in one's own home.

These were the lessons on offer in our gang, the curriculum in a preschool of hard knocks. We were to assimilate the best attributes of criminals along with the innocent mannerisms of youth. And, by some miracle, we tread to this day -- all of us -- on the straight and narrow.

Family-values advocates fail to mention that big families are full of crime, which is too bad, because as anybody who grew up in one will tell you, growing up in this carefully calibrated chaos is an effective way to learn right from wrong, as well as perennial gems like justice, retribution and rehabilitation. We learn, while amassing anecdotes along the way, that "Be good" and "Don't be stupid" mean the same thing. Could the pope himself possibly ask for more?