A sequel that's everything the original wasn't. That's not good. 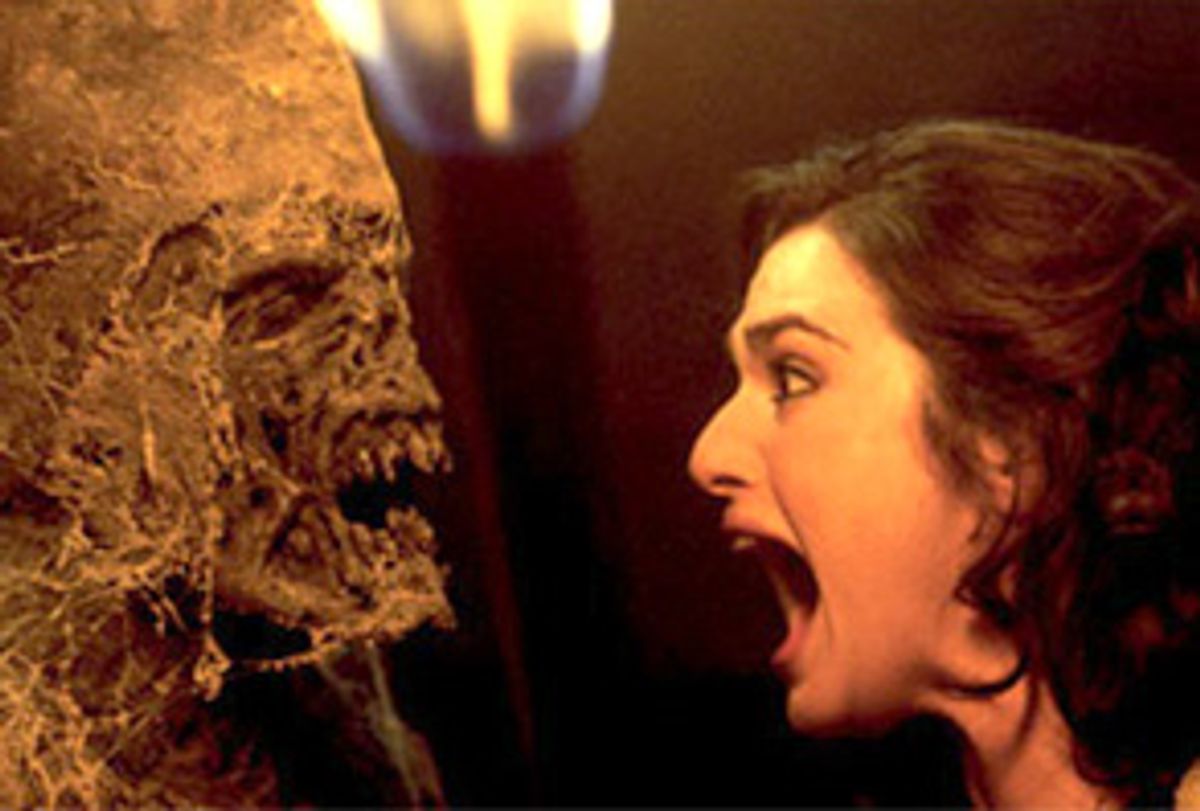 The pleasing thing about Stephen Sommers' first "Mummy" picture was that it didn't present itself as a big deal. It was almost as if nobody had told Sommers about the formula that big-budget, special-effects-laden summer blockbusters are supposed to follow.

The movie took time out for laughs, it didn't keep piling on the climaxes and it didn't linger on the special effects the way some movies do, as if to justify all the money that's been spent on them. The picture came closer to the relaxed, self-parodic tone of the movies it was emulating -- '30s swashbucklers and tales of intrigue in exotic lands -- than the Indiana Jones movies ever quite managed. It was a relaxed, amiable good time.

Somebody made sure that Sommers got the message this time out. "The Mummy Returns" is everything the first "Mummy" was fun for not being. It's loud and chaotic, jammed with effects that don't wow us precisely because they are trying so hard to wow us; it relegates its actors to the scenery; and it's responsible for more climaxes than one of those vibrators that feature the rabbit with the quivering ears.

Except that it wasn't good for me. How it will be for you depends on whether you like being worked over or seduced, hammered by the numbers or tickled and pampered before you're asked to get excited.

One of the fun things about the first "Mummy" was the way it flirted with the politically incorrect presentation of faraway lands in '30s movies. The Egypt of "The Mummy" was all airy luxury hotels and poshly appointed homes, foreboding ruins and desert sands, comic chiselers and cutthroat villains.

You couldn't take it seriously for a second (it didn't take itself seriously) and the plummy silliness was fertile soil for the mystic mumbo jumbo of the plot -- Egyptian priest Im-Ho-Tep (Arnold Vosloo) coming back to life and bringing all 10 plagues of his land with him. (What is un-p.c. here made me uneasy -- the pop-eyed expressions of some of the baddie's dead black henchmen.)

The plot of "The Mummy Returns" isn't a comic take on the nonsense of desecrated holy places and ancient curses -- it is nonsense. I stopped understanding what was going on about 15 minutes in and never regained my bearings. Im-Ho-Tep is back (with the bald and mascaraed Vosloo looking even more like Billy Zane's beefy cousin), looking to revive his honey Anck-Su-Namun (Patricia Velazquez) and trying to get hold of a bracelet that will put the armies of a dark god under his command, let him defeat the legendary warrior the Scorpion King (played by the professional wrestler known as the Rock) and one teensy thing more -- bring about the apocalypse.

Sommers, who wrote the script as well as directed, appears to have been going for something like a less cozy, more Americanized version of Elizabeth Peters' Amelia Peabody mysteries. Amelia is an Egyptologist, a Victorian who'll take the ancient world over Blighty any day and who, on her journeys with husband and son, is always falling into one puzzler after another.

Brendan Fraser's Rick and Rachel Weisz's Evelyn are married in this outing (set in 1933) and they've got a young son named Alex (Freddie Booth). Parenthood doesn't seem to have dampened their libidos (they're always falling into a clutch), but the movie hasn't made a way to bring their young son into the relationship. He's just this little niblet they seem to have picked up along with the rest of their furnishings because they liked his school tie.

The joke is that the kid is meant to be as ingenious and brave as his parents. And Sommers has wisely not directed young Booth to act adorable. But he hasn't directed Booth to be much of anything -- he needs some dry wit, some sand and some sass. As he is now, he's a game little trouper. And since the plot hinges on him, there's a blank at the center of the movie.

Not that you'd notice it. Sommers uses the computer-generated effects and camera as if they were spackling globbed on to plug up the holes. The effects that were almost tossed away in the first movie -- like the face of Im-Ho-Tep appearing in a sandstorm -- are repeated and lingered on here. When his face appears in a wall of water rushing through a mountain pass we seem to be looking at it forever. It's like sitting through one of those slide shows where the presenter keeps asking if the people in back can see when everyone is dying for him to get on with it. (And the jump scenes arrive so predictably that you could use their timing to boil eggs.)

There are some nice effects -- a troop of pygmy skeletons who pull their victims down into the jungle grass so it looks as if they just fell through a hole in the earth. And there's a nice bit with mummy soldiers giving chase to Fraser, who's on the open top of a double-decker, by skittering along the sides of buildings lining the London streets.

But Sommers has succumbed to the relentless camera movement and frantic editing that reduce most action and adventure movies to visual gibberish. It's no match for the gibberish in the script. You keep waiting for the movie to find the right bantering tone. It's not just that it never stops throwing plot and effects at us (which backfires, making the movie seem much longer than its two hours), it's that all the dialogue scenes are flabby buildup to verbal toppers that never come. Sommers even blows the final clinch line between Weisz and Fraser after providing himself with the perfect setup.

Fraser (who, in the first movie, turned out to be a nice, self-effacing, laid-back choice for an adventure hero) and Weisz look like they get on smashingly. But we're as left out of this love match as their kid is because they haven't been given the sparring, sexy dialogue to draw us in. The first movie's ace in the hole, John Hannah as Weisz's gambling and womanizing brother, is trashed here, too. With that thin build and the dry irony of his pip-pip manner, Hannah suggests one of Bertie Wooster's more dissolute acquaintances. I don't think he missed one laugh in any of his lines in the first movie. Finding the laughs in the dialogue he's been given here would require its own expedition. I kept looking at Hannah, hanging around with nothing to do, and his bland little nephew and wondering why both problems couldn't be solved with one stroke.

Hannah could have been profitably employed, and the tyke given some personality, if the little beggar had been taught how to drink, or at least how to play a few hands of rummy. Dissolution isn't just something you learn overnight, you know.