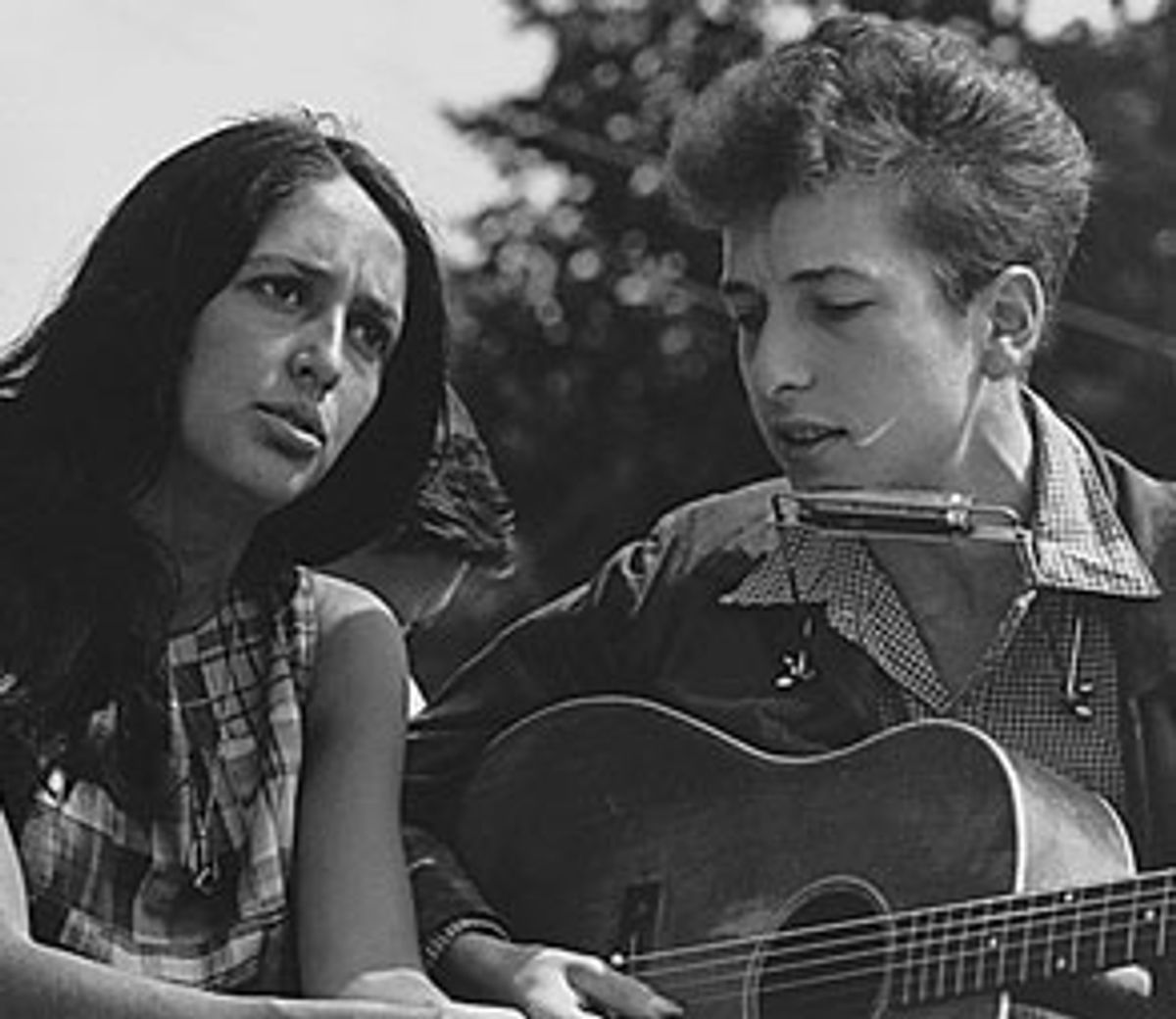 Of all the American musical subcultures of the past century, the most boring was the so-called folk scene centered in Greenwich Village coffeehouses during the 1950s and early 1960s. Anyone who has ever been subjected to the self-righteousness of the politics and to the fake authenticity of the music from that time and place will love Howard Sounes' "Down the Highway: The Life of Bob Dylan" and David Hajdu's "Positively Fourth Street: The Life and Times of Joan Baez, Bob Dylan, Mimi Baez Fariña and Richard Fariña" -- because everyone who had anything to do with the scene gets thoroughly and satisfyingly trashed and exposed for the pretentious, self-centered phonies they were. Sounes' book has the definite virtue of being the last one you'll ever need to read about Dylan (unless you think that the Oscar Dylan just won signals yet another creative outpouring at this late stage in his life), while Hajdu's is more openly malicious and thus more fun.

Sounes certainly faced the greater challenge. The literature available on Dylan is almost certainly more voluminous than that on any figure in popular music, and the prospect of finding new and juicy bits must have at first seemed daunting. But patience and persistence have been rewarded, and those interested will be able to read about the secret marriage and family that Dylan has succeeded in keeping from the world until now. Frankly, though, none of the information about the hidden family is nearly so interesting as the revelations from Dylan's children by other women. They testify that Bob, whatever his failures as a husband, was a good and devoted father.

What Sounes doesn't seem to understand is that the principal reason Dylan was able to keep his later marriage from the press is that, despite a handful of truly great songs such as "Blind Willie McTell" in 1983 and four or five tracks from the surprising "Time Out of Mind" album (1997), Dylan's music over the past two decades hasn't been interesting enough to provoke much media coverage. Like Louis Armstrong from the '40s to the '60s, Dylan has been living for a long time in the twilight realm of the praised but unheard. (Allen St. John, when he was reviewing albums for Stereophile, bet me that he could name 10 singer-songwriter rockers whose work over the last quarter-century was more interesting than Dylan's during the same period. He named Neil Young, Bruce Springsteen, Van Morrison, Elvis Costello, Lou Reed, Randy Newman, Paul Simon, Richard Thompson, Leonard Cohen and Tom Waits. I paid up.)

Unfortunately, Sounes seems to think that his job isn't just "the challenge of writing a major biography" but also writing one "that conveys the full grandeur of Bob Dylan's artistic achievement." This is a mistake; Sounes is a fan, not a critic, and he can't really distinguish the good Dylan albums from the bad ones except by sales. As a result, a great deal of time is wasted correcting the record on which ex-girlfriends or Village hangers-on inspired which venomous lyrics before Sounes gets to the actual biographical parts.

A good deal of time is wasted, too, on sketchy summaries of the politics and culture of the times. Trying to track the origins of Dylan's music, Sounes tells us piously that "Bob respected African American people from the start, partly because they were the originators of much of the music he loved." (Sounes could have written liner notes for Peter, Paul and Mary albums.) Here's how he describes the cultural and political backdrop that Dylan encountered when he came to the Village: "John F. Kennedy was newly sworn in as President; there were serious racial problems in the southern states and real fears that the Cold War could escalate into world war. In this social climate, folk music became highly popular." OK, but it's not out of the realm of possibility that Dylan could have stayed home in Hibbing, Minn., and still known all that.

Sounes is dogged and sincere in his pursuit of Dylan and the world he emerged from, but Bob Dylan -- the Bob Dylan who, when he first heard Elvis' voice, "just knew I wasn't going to work for anybody and nobody was ever gonna be my boss" -- never quite seems to inhabit the book. Simply put, "Down the Road" never rocks, primarily because Sounes doesn't seem to really, well, dig the music.

He writes, "Rock 'n' roll, a form of music that had begun in America most popularly in the 1950s with artists like Chuck Berry, Elvis Presley, and Little Richard, had dwindled away into formulaic top-forty in its native country. The Beatles, however ... had come from Liverpool to prove in the space of one year that this form of music could still be exciting and hugely popular." This sounds like a space alien trying to explain to another space alien about rock 'n' roll, and it's nonsense; the early '60s were a time of Sam Cooke and Gene Pitney and Dion and the Shirelles and the Beach Boys and the Drifters and Del Shannon; of the great Jackie Wilson, of Phil Spector and of early Motown; of "Louie, Louie" and "It's My Party" and "Twist and Shout." There was nothing wrong with early-'60s rock; if anything, it was a richer and more varied music than it was the day Buddy Holly died.

Dylan and the Beatles didn't "save" anything. What Dylan and the Beatles (and later the Dylan-influenced Beatles and the Beatles-influenced Dylan) did was to set the stage for a rock music that could be appreciated by older, college-age kids who had grown up on Buddy Holly and wanted something that reflected the more complex universe they now lived in. Dylan didn't save rock 'n' roll; it was rock 'n' roll that saved Dylan, saved him from a lifetime of godawful, humorless "protest" music. Or, in the revelatory words of rock critic Lester Bangs: "He wanted to be Elvis, but there was an opening for Woody Guthrie so he took it."

Sounes, to his credit, does dispense with several of the old Dylan-folkie myths, particularly the ones concocted by Mr. Zimmerman himself. Far from being Guthrie's anointed successor, it appears that Dylan, in the words of one of Guthrie's old friends, "was just another visitor ... I don't think Woody thought anything about him." (Bangs, again: "Dylan faked his whole career; the only difference was that he used to be good at it and now he sucks." Bangs wrote that, by the way, in 1977.) The supposed outrage exhibited by fans when Dylan "went electric" at the Newport Folk Festival was, it turns out, mostly disgust over the quality of the sound system. And -- as if anyone who actually listens to those dreary early records needs to be told -- Bob Dylan was never very political. It's just that most fans and critics were afraid to take him at his word when he scandalized Joan Baez by telling her that he wrote "Masters of War" because he thought it would sell.

I should add that none of the revelations about Dylan's lies in either book diminish him in any way. Quite the opposite. We watch a young, supremely talented kid take in the vast smorgasbord of American rebel culture, savor it, select from it and create a workable persona from it, and we admire him for that, immensely. Even the story that probably should shock us -- his coldblooded dumping of Joan Baez, who loved him and supported him and really loved all that hokey protest music -- really doesn't. If we loved the Dylan who made the later records, we support his conscious decision to abandon Baez and everyone else connected with that scene. (The prospect of having to grow old singing duets of "With God on Our Side" with Joan Baez is my personal vision of hell.) He moved on, he really didn't think twice and we are all better off for it.

Much to Hajdu's credit, he has no patience at all with Dylan's folkie associates or Dylan's own fake anthems like "Blowin' in the Wind" -- finger-pointing music that points at nothin'. "Positively Fourth Street" isn't just about Dylan, either. It's about the glamorous quartet of Dylan and Joan Baez ("the Liz and Dick of the self-righteous set," as Mort Sahl dubbed them), her sister Mimi and brilliant and enigmatic Irish-Cuban novelist and songwriter Richard Fariña. Fariña's 1966 death in a motorcycle accident at age 29, just as his only novel, "Been Down So Long It Looks Like Up to Me," was about to be published, caps off the narrative.

Hajdu nails the time and place beautifully, lavishly using quotes from the characters who lived the scene to sum it all up. ("If there was a party in the village," said Oscar Brand, "it was 'You bring the folksinger, I'll bring the negro.'") But if only because we know what came after, Dylan's thread dominates our attention. Hajdu is smarter than Sounes about the music. He points out early on that "folk" music -- that is, the work of the seminal singers included in the fabled "Anthology of American Folk Music" -- was never meant to be "noncommercial." All those songs were presented as popular music in their own time and place. He zeroes right in on the essential difference between Dylan and the pristine folky style of Baez and her acolytes. The latter were self-conscious followers of Harvard-educated Pete Seeger, while Dylan was the illegitimate spiritual child of Woody Guthrie, in whom the lower-middle-class, Jewish college dropout from the Midwest found a role model who was "Hank Williams, James Dean and Buddy Holly -- a literate folksinger with a rock and roll attitude."

The rest of the story, as we all know, is history. But history can sometimes be pretty boring, so if you haven't been enthralled by Dylan since the Jimmy Carter era, you should stick with Hajdu's book, which leaves Bob Dylan where we want to remember him -- stuck inside of Mobile with the Memphis blues again. For God's sake, and for Bob's and ours, let's leave him there.