I've got news for Gov. Jane Swift, and it probably isn't what she wants to hear. 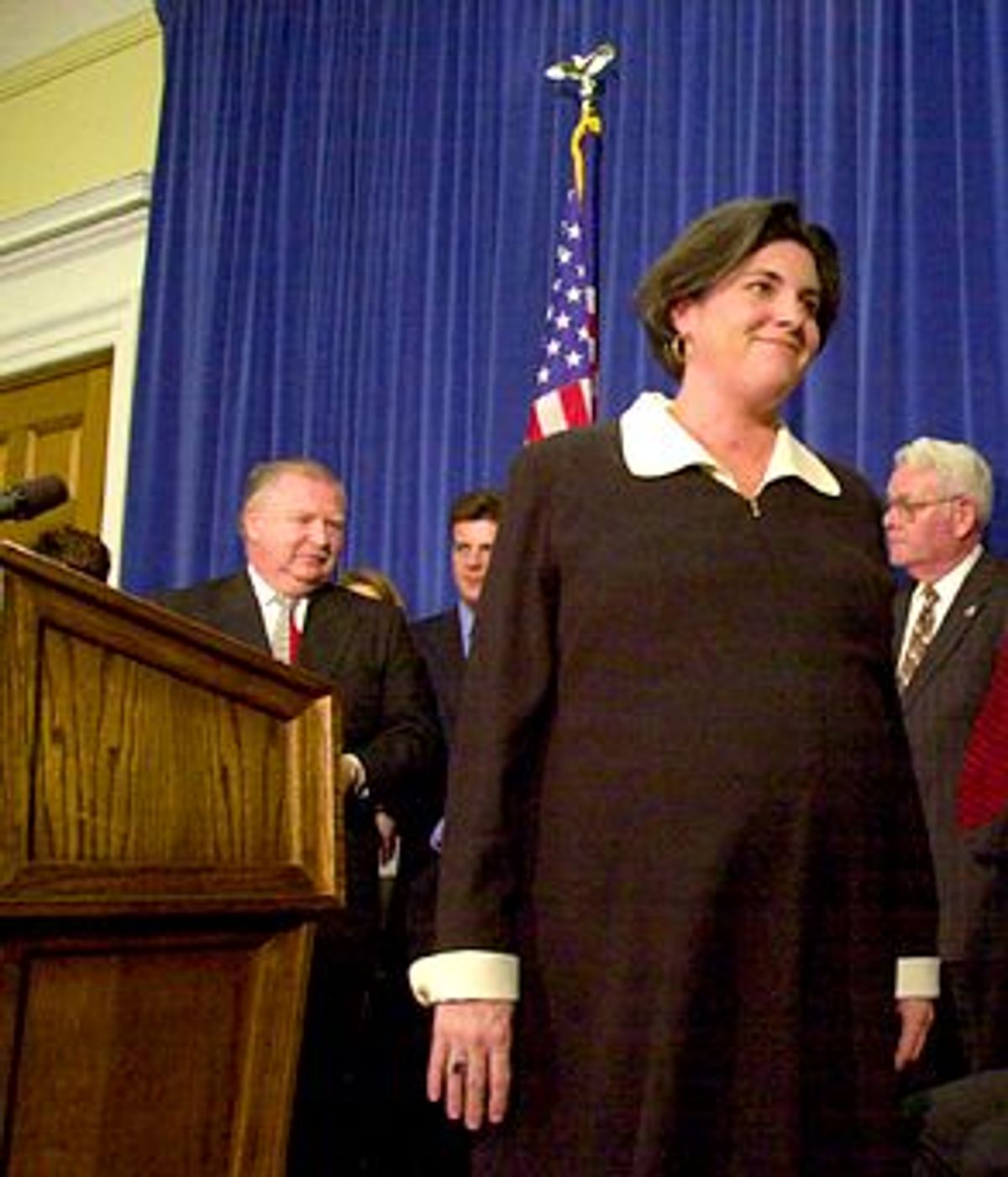 Right now, the acting governor of Massachusetts is in the hospital, lying flat on her back. Tuesday night, she delivered twin girls, Lauren and Sarah, making her the first governor to give birth in office.

Last week, Swift's spokesman, Jason Kauppi, informed the New York Times that the acting governor had discussed -- while in bed -- a proposed tax on cigarettes, as well as legislation to pay for road and bridge projects around the state.

"She is resting, she has her feet up," said Kauppi, "but as she would tell you, her brain is still working."

One hears very few specifics about Swift's brain or, for that matter, her position on roads, bridges, cigarettes, the economy or the earned-income tax credit. The organ one hears most about is her uterus (and her breasts, which she may or may not be using to feed her children; next question, please). One also hears quite a lot about her position in the hospital (on her back).

Nevertheless, Swift is a national figure, and has been one ever since 1998, when she declared her candidacy for the lieutenant governorship of Massachusetts three weeks before giving birth to her first daughter. Her fame (one might say infamy) only increased when a state ethics panel found her guilty of having created the appearance of impropriety for allowing (or perhaps requiring) aides to babysit for her daughter.

Think of how strange this is: Certainly, Swift is not the first mother elected to public office. And it is practically a requirement of all American political candidates to be married with children. (Our "family values" demand it.) She's certainly not the only public figure to have to balance the demands of her job with a trip to the hospital (consider the famous maladies suffered by Ronald Reagan, Rudy Giuliani and Dick Cheney, to name a few) or even with parental leave (Tony Blair, anyone?). So what, exactly, is the national news value of a pregnant governor in Massachusetts?

Swift is not famous for her status as a politician (pop quiz: Name the lieutenant governors of Connecticut and Rhode Island), but rather for having the audacity to combine pregnancy and parenting and politics. And, given that she is a public figure, we all feel free to speculate about her private life with impunity, to use her as a blank slate on which we can project all our cultural anxieties about motherhood, gender and power.

And project we have. Swift's public persona has been commandeered to prove any number of (contrary and contradictory) points about women who work: from feminist ("Look, girls, you too can grow up to be a governor and and a mommy!") to anti-feminist ("Women want it all and they don't care what they have to sacrifice to get it -- even if the price is their children's well-being!").

Child-free advocates, such as Elinor Burkett, author of "Baby Boon," would undoubtedly see Gov. Swift as prima facie evidence that breeders in the workplace will exploit any resources they can, even if it means soliciting the unpaid labor of junior staff. Even working women have felt squeamish about embracing a woman whose alleged abuses of power could hurt their cause. (One such woman is writer Martha Ackmann, who chastised Swift in Salon last year after news of the babysitting scandal made national headlines.)

Swift is all of these and none of these. She is nobody's role model. She is such an infuriating, contradictory character that she shifts the very definition of the terms "feminist," "anti-feminist," "mother" and "politician." She is an outcast that no one wants to claim. Her circumstances turn ordinary motherhood into spectacle: She is our own pregnant pariah.

Despite our many outward differences, Jane and I have occupied the same territory. Like hers, my pregnancy was looked at as dangerous, unnatural, selfish, self-indulgent, hazardous to my future and probably to my child's health. I was a social problem worthy of attention, a woman whose ambitions outpaced her perceived abilities, a living metaphor for everything wrong with motherhood today.

When I sift through media accounts of the Jane Swift story, I can't help thinking, Et tu, Jane?

I suppose that one could dismiss this insight as extreme autobiographical myopia, the product of a narcissistic personality disorder (something that, everyone knows, causes women like Jane and me to put our own selfish desires above the needs of our children). But consider the parallels.

Most stories of monstrous motherhood have at their center a woman who because of her circumstances -- age, income, occupation -- is deemed unable to care for her children. Because our very definition of "good" motherhood hinges on the idea of altruism and maternal self-sacrifice, the mother who chooses to bear a child in difficult circumstances is seen as taking the pleasure of parenting without paying the price. It's considered selfish at best, and frequently, women are warned that bearing children they can't care for "properly" borders on child abuse.

On the morning I delivered my daughter, my O.B. came in to talk to me. "Of course," he said, forgoing congratulations, "it would be better for your child if you gave her up. But if you are not strong enough to do what is best for her, you will do what you do."

Swift also has been chastised for her selfishness in bearing children in unconventional circumstances. Besides being governor, Swift is also rumored to have financial problems, and she has a three-hour commute between her office in Boston and her home in the Berkshires. (She spends several nights a week sleeping at her brother's apartment in the city.)

Her children, we are told, will suffer for their mother's political ambitions. Sure, Swift's husband, Chuck, a former construction worker turned stay-at-home father, can care for them. But that's certainly not enough, writes Wendy Kaminer in the American Prospect, since "he can't bear them for her; he can't recuperate from childbirth for her (if recuperation is necessary); he can't experience whatever hormonal swings lay in store for her, catch up on her sleep for her, or keep her from being happily distracted by the mere thought of her two new babies. Why would you want to become governor and give birth to twins more or less simultaneously, anyway?"

Clearly, the implication is that any woman who would not be distracted by her babies, who could simultaneously desire both motherhood and power, is a woman who is willing to sacrifice her children on the altar of her personal ambitions. Kaminer concludes that Swift's desire to be both mother and governor is "reminiscent of the 'have it all' pop feminism of the '70s and '80s. Having it all (not sequentially, but all at once)," adds Kaminer, "always seemed like a childish fantasy to me." And Gail Collins of the New York Times chimes in: "A pregnant woman can certainly be governor, but I think I speak for us all in suggesting that a semi-homeless extremely pregnant woman is not in the perfect position to suddenly take over the job."

The concept of choice, perhaps the central tenet of feminism, can also be used as a bludgeoning device against women whose choices don't meet with our approval. In the case of teen mothers, the range of socially sanctioned choices are clear: One can have an abortion, or one can give the child up for adoption. Any other choice is considered to be an abdication of choice, a product of personal weakness; it is something that good mothers simply do not do.

How different is that from strongly suggesting -- even demanding -- that a woman postpone her pregnancy until such a time when it is convenient for her, personally and professionally?

The fact is that there may never be a convenient time for a woman with a political career to take, say, three years off to bear and raise children. If one is to rise to a high office, one needs to start early. And it may be that the reason we see so few women (and so few mothers) in high office is because the previous generation of women didn't dare to take the same risk of a highly public scolding.

Nobody understands the political pragmatism of starting early better than Swift herself, who won her first seat in the state Senate at age 25. As she told the Pittsburgh Post-Gazette: "You just don't see that many women being involved in politics at a high level at the same time that they're giving birth and having children. I think I am the first of hopefully many, and I think it's true that the desire to eventually get women to the very highest levels of office in our country is going to necessitate that women enter politics at an earlier age."

Swift, at 36, represents a new generation. Call it post-feminist, third wave or the more generic term Generation X. However one chooses to define it, Swift represents a generation of women who are more comfortable with forcing those around them to accept that a woman can fit -- comfortably and conveniently, thank you very much -- into more than one category, that one can be Republican, female, family-oriented, pregnant and a governor.

Of course, Swift's brand of in-your-face maternity is still considered to be a complete aberration. She's still a pariah. And one has to wonder how many women will choose to follow her lead after watching her take a public thrashing with no discernible ending.

As a fellow pregnant pariah, I can tell her that pregnancy is only the beginning. Those people who feel that it is their business to comment on one's inappropriately swelling belly, to wonder aloud how one will breast-feed her children while governing a state (or completing high school), who spew dire warnings about the importance of having a mother at home during those crucial first three years, will only become more rabid in the presence of actual children (as Swift has already had ample time to see in the three years since the birth of her first daugher, Elizabeth).

A common complaint of mothers is that they "disappear" after giving birth, that others stop seeing them as they focus on their children. The uncommon mother -- the governor, the lesbian mother, the teenage mother -- never disappears. Parenting continues to be a public affair; privacy is a luxury reserved for those who have the good manners to follow the rules, and no rules are more rigidly enforced than those that separate the good mothers from the not-so-good.

For myself, I will say that there is a certain thrill and sense of freedom that comes with being so outside the mainstream that the rules do not apply to you. As every good mother knows, there is something to be said for the happy and creative rebel.