Why the Senate should reject Ted Olson

His role in the sleazy Arkansas Project is bad enough. The fact that he hasn't told the truth about it is worse. 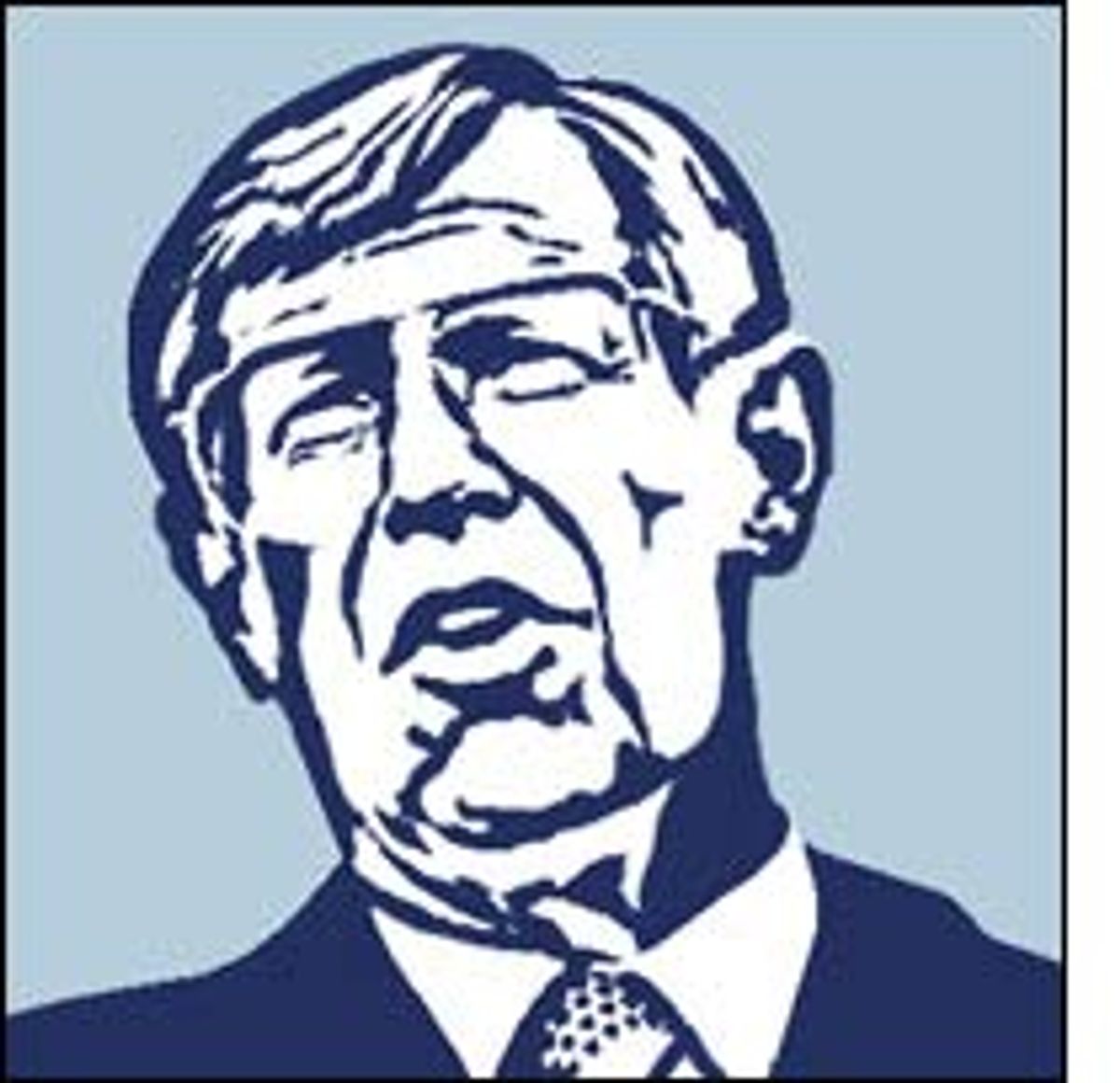 "Who the hell cares about the Arkansas Project anymore?" asked Orrin Hatch, chairman of the Senate Judiciary Committee, after the committee deadlocked 9-9 on party lines on whether to confirm Theodore Olson to be solicitor general.

The answer is simple: Every American who thought that the impeachment of former President Clinton mattered cares, or should care, about the Arkansas Project.

Because the Arkansas Project -- the five-year, $2.4 million dollar effort to dig up dirt on Clinton, funded by reclusive billionaire Richard Mellon Scaife and controversially channeled through the tax-exempt, nonprofit American Spectator magazine -- played a key role in the events that led to that impeachment.

It makes perfect sense that Sen. Hatch wants us to think that the Arkansas Project is some 19th century dispute over municipal water rights, rather than a sleazy, secretive operation that had a major impact on the biggest political crisis of the last 50 years. The Republican Party and the right wing would like nothing better than for America to forget that they spent eight years and tens of millions of taxpayer dollars trying to bring down a sitting president, often -- as with the Arkansas Project -- using the most dubious methods. Now that their own candidate has been installed in the White House, it would be much better if all that sleazy dirt-digging simply never happened.

For what the Arkansas Project really reveals is the connection between the creepy-crawliest elements of the American far right and the powerful, respectable, establishment face of conservatism, in the person of Ted Olson. It's important for the GOP that that connection be forgotten, immediately and permanently.

Certainly Olson seems to have forgotten much of it. His memory of his involvement with an 800-pound gorilla of a project that defined the American Spectator in those years has proved remarkably vague and changeable for a lawyer with a mind like a steel trap.

Questioned about his knowledge of the Arkansas Project by the Judiciary Committee, Olson initially said he first became aware of it in 1998, but only as a member of the American Spectator's board of directors. Then he said that it was the summer of 1997. Then he changed his story again, saying that he first became aware of it "in connection with my service to the Foundation as a lawyer."

It's understandable that Olson wouldn't want to admit that he was up to his elbows in this low-class smear campaign. But considering the well-documented facts, it's almost unbelievable that he tried to deny it. As Salon's extensive reporting on the matter in 1998 proves, Olson was deeply involved with the Arkansas Project from the beginning. His denials are simply not credible. In fact, it's his failure to tell the full truth about the Arkansas Project that raises the most serious questions about his fitness to serve as the nation's solicitor general -- far more than his involvement in the partisan campaign against Clinton. And Republicans, who endlessly proclaimed that Clinton's real offense wasn't having extramarital sex, but lying under oath about it, should be the first to agree.

Olson clearly shared the Arkansas Project's anti-Clinton goals. He was present at its first meeting in 1994, which was held in his office. He was a trusted friend and advisor to Scaife, its wealthy benefactor. He provided it with legal advice. He worked closely with, and was a longtime friend of, its principal players, including Spectator editor R. Emmett Tyrrell and the two Washington attorneys who ran the Project, Stephen Boynton and Dave Henderson, who also had long-standing ties to Scaife. He provided legal representation for the most controversial figure associated with the Project -- disgraced former Arkansas judge and con-man David Hale, the key Whitewater witness, who was accused of receiving Arkansas Project money while cooperating with Kenneth Starr.

The saddest thing, from Olson's point of view, is that his attempts to disentangle himself from the Project are completely unnecessary -- that is, if we are to believe such conservative stalwarts as William Safire and the editors of the Wall Street Journal. According to them, the Arkansas Project was a noble journalistic enterprise: If they're right, why should Olson even try to disavow a connection to it? Why not just embrace it and ask for a Pulitzer?

On Thursday the Journal's lead editorial and Safire's column both argued that Sen. Patrick Leahy, D-Vt., the ranking Democrat on the Judiciary Committee, had no right to demand documents from the Spectator because the Arkansas Project was a journalistic endeavor and thus protected by the First Amendment. Leahy wants the records to help determine the truth about Olson's involvement with the Arkansas Project.

Their arguments might carry a bit more authority, however, if either of them had acknowledged that the question of whether or not the Arkansas Project was a legitimate journalistic endeavor, as opposed to a political operation, was hotly debated within the American Spectator itself -- and ultimately led to a cataclysmic rift within the magazine's ranks. Indeed, the dispute, which had significant legal and tax implications for the magazine's tax-exempt, nonprofit status, had a direct bearing on how Olson came to be a member of the magazine's board of directors.

In 1997, the stench arising from the Arkansas Project became too much even for the Spectator's original publisher and cofounder, Ronald Burr. Burr, who was also secretary and treasurer of the magazine's board, was concerned that the Scaife money that was flowing through the Spectator to anti-Clinton operatives Stephen Boynton and Dave Henderson was not being properly accounted for. He and other staffers were also troubled that little actual journalism was resulting from Scaife's largesse.

Burr recommended that the Spectator hire an accounting firm to audit the Arkansas Project. This idea did not sit well with Spectator editor Tyrrell, who had Burr -- his friend of 30 years, with whom he founded the magazine -- summarily ousted. The man who replaced Burr on the board was Theodore Olson.

The crucial point, which both the Journal and Safire prudently ignored, is that the American Spectator's nonprofit owner, the American Spectator Educational Foundation, is prohibited under IRS regulations for 501(c)3 class organizations from engaging in explicitly political activities -- like "opposition research," which much of the Project's journalism strongly resembled. Nonprofit political magazines face questions about whether they're complying with those regulations all too frequently -- during the Reagan administration, the IRS investigated left-wing, non-profit Mother Jones, thanks to its political muck-raking, though it was eventually exonerated.

So was the Arkansas Project a legitimate journalistic venture, or a political operation? It's a murky area, but if it was a journalistic venture, it was a highly singular one. The money flow, for example, did not bear much resemblance to the disbursement practice at, say, the New Yorker. $1.8 million of Scaife's $2.4 million, according to Spectator records, was paid to Boynton and Henderson, who then in turn passed some of the money to various anti-Clinton operatives including Parker Dozhier, the shadowy Arkansas bait-shop operator accused of paying off David Hale.

Whatever else you can say about this arrangement, it is certainly an unusual way for a nonprofit journalistic organization to disburse its monies. In his column, Safire called the American Spectator a "feisty little magazine." I don't know what kind of magazines Mr. Safire has worked for, but if some shadowy far-left billionaire came to Salon and offered us millions of dollars to start a "Texas Project" to dig up dirt on George W. Bush, and if we then mysteriously channeled the money, with vague accounting, to a couple of lawyers who in turn handed some of it out to a rogue's gallery of lowlife operatives, one of whom was sheltering and giving money to the central figure in a case that could result in Bush being removed from office, I think it safe to say that you could call us "feisty," but whether we would merit the title of "magazine" is less clear. (And we're not even a nonprofit.) Finally, just imagine if we succeeded, and President Gore then appointed one of the Texas Project lawyers to be his solicitor general ...

As for Safire and the Wall Street Journal's reaction to such a "Texas Project," one shudders even to imagine it. The Journal editors, famed far and wide for their near-psychotic hatred of Clinton, revealed more troubling signs of delusional thinking in Thursday's editorial, asserting that Sen. Leahy is "acting at the prompting of Clinton acolytes at Internet-based Salon magazine" and saying that he is "marching to the higher authority of Salon magazine." We regret to inform the Journal that Sen. Leahy has remained impervious to our attempts to direct him by remote control, despite promises to fill his campaign coffers with our dot-com millions.

Olson's lack of candor about his role in the Arkansas Project disqualifies him for the role of solicitor general. When a vote gets to the full Senate, one would hope that some Republicans would join Democrats in rejecting his appointment. If not, the Democrats are within their rights to take all necessary steps, including a filibuster, to stop it.