Battle of the gaming giants

At opening day of the E3 Electronic Entertainment Expo, Sony, Nintendo and Microsoft eye one another warily. 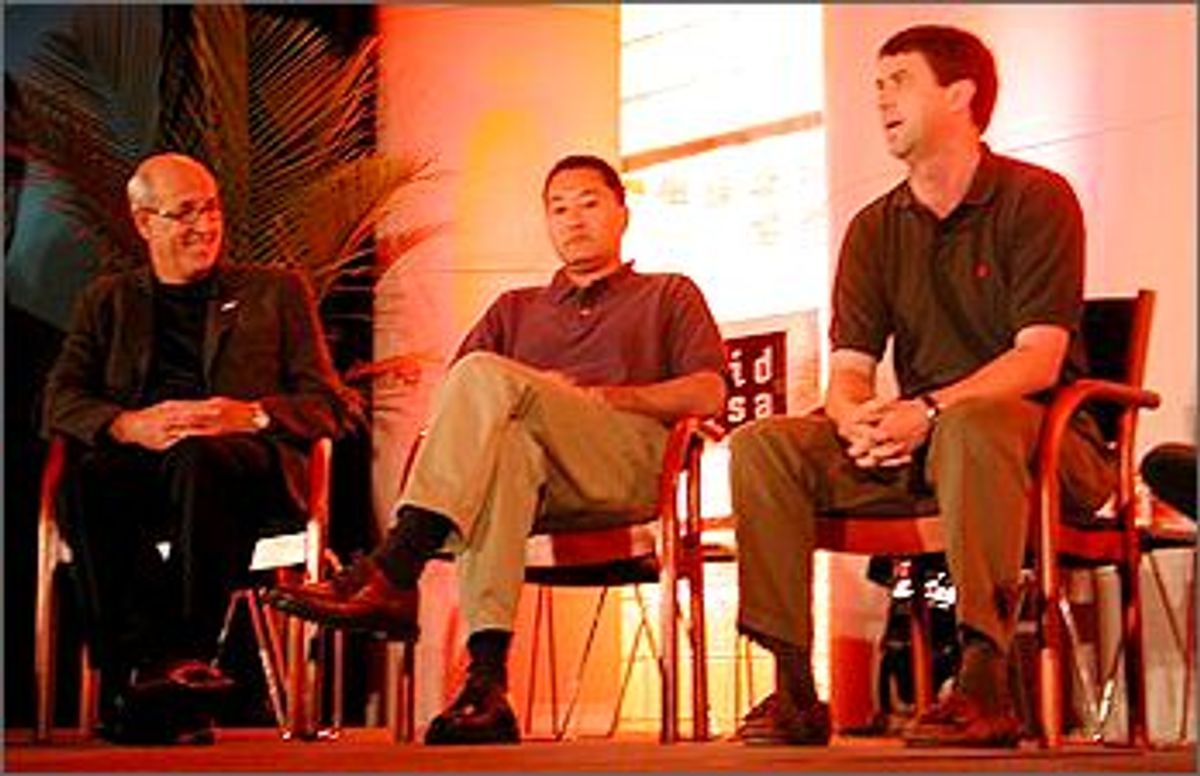 They appeared, at first, to be amiable fellows, dressed casually in khakis and polo shirts, seated side by side in front of hundreds of game fanatics. But their behavior told the story of a contentious industry. Main, whose heels didn't touch the floor for 20 minutes, looked on the verge of flight; Kaz couldn't stop making fun of Microsoft, and Bach sat there with slumped shoulders, irked enough by Sony's jabs to refuse a press opportunity photo.

Main was Nintendo's jolly elder statesman. He gave the impression of having watched, bemused, as his competitors unveiled fancy new technologies and concluded that, ultimately, the success or failure of a system comes down to software sales, not bells and whistles. His answer to one conference attendee's questions put this in stark terms. When asked why Nintendo isn't shipping its next console, the GameCube, with any kind of DVD player, hard drive or modem attachment, Main replied: "It's all about great games."

Nintendo plans to focus on a limited number of strong titles to be played on a machine built for gaming. "We're like that Tiffany box, very small and very special," said Main. The strategy is a dramatic contrast to the strategies of Sony and Microsoft, which seem to want to cram every conceivable digital media experience into their consoles, goading each other into a sort of hardware upgrade arms race.

But Nintendo has decades of experience making wildly popular games. Mario, Zelda and Pokémon alone practically guarantee the sale of millions of units. Also, no one has yet mounted a serious challenge to Nintendo's lock on the thumbs of traveling gamers. The GameBoy has sold more units than any console ever produced. The GameBoy Advance will be designed to work intimately with the upcoming GameCube, meaning Nintendo may be able to use their momentum on school buses and airplanes to drive hardware sales in homes.

Meanwhile, Sony's Harai -- seated between his competitors -- pulled his chin back into his neck and spoke in an assured monotone, presenting PlayStation's dominance in the game market as a fait accompli. He was the only one of the three men to present his console sitting back in his chair with his legs crossed. His confident posturing stood out even more when he announced that the question wasn't who was to be first in the console wars, but who would be second and third. His deadpan bravado was met with some laughter.

Microsoft's Bach was the most hesitant of the three gaming execs and the one with the most earnest, eager-to-please presentation. He took pains to cite each of the gaming factions that had contributed to the Xbox design: "Microsoft listened to gamers. We listened to game developers." As he spoke, his shoulders slumped and his worn brown leather shoes pointed slightly pigeon-toed.

If Bach was defensive, Sony's Harai was on the warpath. Harai painted Microsoft as an also-ran whose developers had cribbed from Sony's playbook. A couple of times, Bach acknowledged the charges -- conceding, for example, that the Microsoft split of 30 percent original "first-party games" and 70 percent "third-party games" was a direct echo of the Sony equation. Harai's response: "Follow our lead, follow our lead."

And to some extent, Harai is right. PlayStation has the indelible Sony brand, with the entire ancillary entertainment provided by film and music and robotic dogs and video cameras. Also, the company has made its console compatible with the entire backlog of thousands of PlayStation 1 games, such that you can expect loyal PlayStation gamers to rely dutifully on the PlayStation 2 to provide state-of-the-art gaming, DVD playback and the chance to revisit their original PlayStation favorites.

But if Sony expects little competition from Nintendo, the real challenge could come from Microsoft. The software giant has a knack for adaptation to new technology markets. Its machine is an amalgamation of the best of console and PC gaming, with ready high-speed Internet access thrown in. With system architecture similar to the PC, it's easy to make better games faster. The Xbox should have a solid game library by the time it launches in early November 2001.

Each of these three men has his eye cast lovingly toward young geeks-in-training worldwide -- a group Bach termed "the enthusiast part of the market," and Harai referred to as the "imaginators." It's likely up to Sony and Microsoft to fight it out for the largest share of the Wal-Mart market, while Nintendo continues to maintain a steady audience of the youngest gamers and older connoisseurs.

The most telling moment came after the talking was done, when Harai and Main were willing to smile and shake hands on camera, and Bach said "No thanks." Nintendo and Sony have learned to coexist, but Microsoft and Sony appear to have a pitched battle ahead of them during the next holiday season.