Hatch asks, "Who the hell cares about the Arkansas Project?" as a full Senate vote looms. 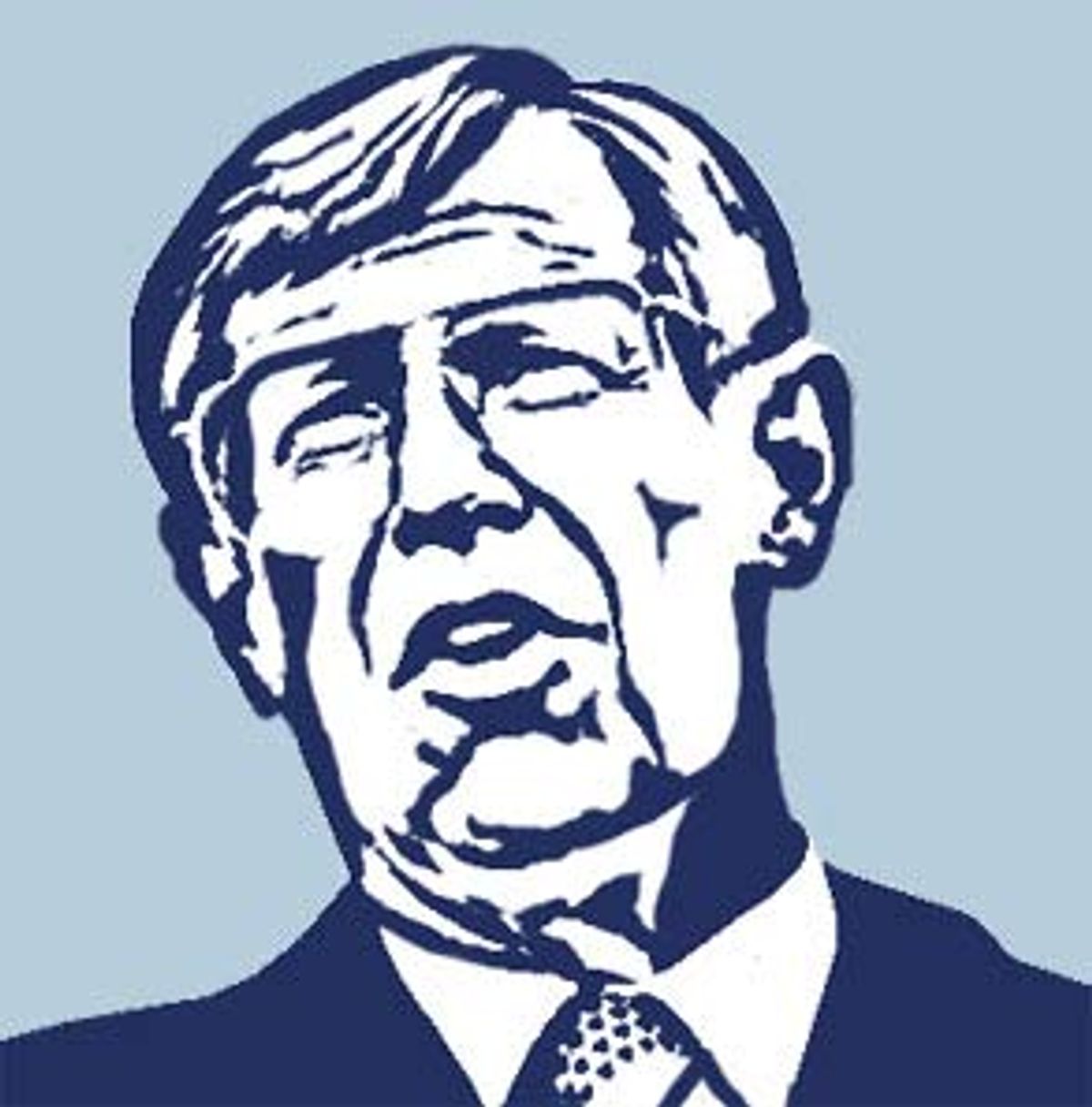 After the Senate Judiciary Committee split 9-9 along party lines on the controversial nomination of Theodore Olson as solicitor general, exasperated committee chairman Sen. Orrin Hatch, R-Utah, leaned toward the microphone and asked, "Who the hell cares about the Arkansas Project?"

Apparently, Democrats do. Sen. Patrick Leahy of Vermont, the ranking Democrat on the committee, cited Olson's contradictory testimony about his involvement in the Arkansas Project, a mid-1990s anti-Clinton scandal hunt effort run by the American Spectator magazine that was also the subject of a federal investigation, as a reason he could not vote for the nomination.

But Leahy didn't try to block the vote, and the resulting tie would've killed Olson's bid in a normal year. But with the power-sharing agreement that party leaders worked out in the evenly split Senate, Majority Leader Trent Lott, R-Miss., can break committee deadlocks, and Hatch assured everyone that Lott would cooperate. That means -- unless the Democrats pursue the unlikely, but dramatic task of a filibuster -- the nomination will most assuredly go to the floor for a full vote.

But even among Democratic Senate staffers, the next step seemed uncertain. One, who works for a senator on the committee, believed that a vote could be split and that Democrats could decide to filibuster, if they reach the number required necessary -- 41 members. But another staffer with a high-ranking Democratic senator said that if it's clear that the Democrats reach that magic number, party leaders might agree to subject the nomination to a public hearing.

If that happens, it will follow Leahy and the other committee Democrats' failed attempt to launch a bipartisan probe of Olson, whose inconsistent answers in written and oral testimony about the role he played in the Arkansas Project before and after he joined the board of the American Spectator have prompted much criticism. His story was thrown into even greater confusion with the recent accounts of former star Spectator reporter David Brock, who has alleged a far greater, and earlier, role by Olson in the project than the nominee has admitted to.

Democrats have also criticized Olson's representation of discredited Whitewater witness David Hale, who was suspected of taking a payoff from the Arkansas Project in exchange for anti-Clinton testimony.

After at first publicly considering supporting an investigation of Olson's role in the project last week, Hatch has been adamant that there was no basis for a probe, and repeated on Thursday that he would not call for one. Olson's responses, Hatch insisted, "show no inconsistencies or evidence that Mr. Olson misled or was less than truthful to the committee in any way." He further claimed that all the key players in the Arkansas Project had affirmed Olson's account in letters that they had sent to the committee over the past week.

Then Hatch took on Brock. Though he was careful not to call Brock a liar, and went so far as to describe his personal relationship with the writer as "friendly and decent," Hatch portrayed him as a shaky source, claiming that he had "backpedaled" from his remarks to the Post in a subsequent interview with the New York Times.

But Brock has done everything but back off his assertions, reiterating his challenges to Olson's veracity in a Wednesday interview with Salon. He also blasted Hatch for relying on the word of R. Emmett Tyrrell Jr., editor in chief of the Spectator, who insisted that Brock himself wasn't part of the Arkansas Project. "Tyrrell's assertion is false," Brock said in a May 16 letter to Hatch, declaring that expenses for anti-Clinton stories he worked on during 1994 and 1995 were paid out of Arkansas Project funds.

But none of this shook Hatch's determination. As he had in the May 15 memo, Hatch repeated a line from a summary of the Shaheen Report, an investigation into the Hale matter and alleged Arkansas Project payoffs that has yet to be released to the public. Reading from a summary from a pair of federal judges who reviewed the full report, Hatch said, "Many of the allegations, suggestions and insinuations regarding the tendering and receipt of things of value were shown to be unsubstantiated or, in some cases, untrue." That was close enough to a complete affirmation of Olson's virtue to satisfy Hatch.

The chairman also ran through a list of Democrats and reputed liberals who had said something nice about Olson, including Clinton attorney Robert Bennett and Gore recount lawyer Laurence Tribe. But maybe Hatch should have left former White House counsel Beth Nolan off that list; the kind words she had for Olson came from a letter, sent to independent counsel Alexia Morrison in 1987, when Morrison was investigating concerns that Olson had been dishonest during congressional testimony about some of his work as a Reagan administration lawyer. In that matter, Morrison concluded that Olson's testimony was "less than forthcoming" but "literally true."

Leahy, however, remained unsatisfied with the bipartisan testimonials, and bridled at Hatch's characterization of the possible Olson investigation as "a fishing expedition." While he praised Olson's skills as a lawyer, Leahy said that Olson's "word games" in his testimony about the Arkansas Project were too much to swallow. "I have become increasingly concerned that he has not shown the willingness or the ability to be sufficiently candid ... with the Senate," Leahy said. "I would have difficulty having confidence in his abilities to carry out the responsibilities of solicitor general."

Noting that Olson has changed his testimony about when he first learned of the Arkansas Project, how he came to represent Hale, and how much he had been paid by the Spectator for certain anti-Clinton stories he authored, Leahy asked, "Is it selective memory, or something he doesn't want us to know?" As for all the letters confirming Olson's testimony, Leahy observed that they were written by Olson allies who weren't under oath and could not be cross-examined.

Though Leahy's words about Olson remained fully loaded, he adopted a tone of resignation during the hour-long proceedings. Leahy was eager, he said, "to lower the level of vitriol" that had characterized the most recent phases of the Olson battle. He certainly lowered the volume, hastily mumbling his way through his statement in such a low voice that Sen. Arlen Specter, R-Pa., asked Leahy to speak up.

Hatch, however, wanted everyone to shut up and vote. He cut off fellow Republican Sen. Jeff Sessions of Alabama, who wanted to counter Democratic charges about Olson's veracity, and Hatch looked ready to murder Specter when the Pennsylvania senator flirted with backing another delay.

"I'm prepared to support an investigation if there's something to investigate," Specter said. "I don't want this matter to proceed to a hasty vote, Mr. Chairman, and leave the impression that something's wrong here, that something's being covered up."

As for the legal proof that Specter had asked for, Leahy contended that Democrats couldn't prove something had been covered up, without the investigation. He added that, had it not been for Hatch's intransigence on the investigation issue, Olson might have gotten some Democratic support in the committee. That was an opinion echoed by Sen. Russ Feingold, D-Wis., during the hearing, and by Will Keyser, spokesman for Sen. Ted Kennedy, D-Mass., after the vote. Kennedy had expressed tentative support for Olson during his April 5 confirmation hearing, but joined the nays on Thursday. "It's about this process," Keyser said of Kennedy's change of heart.