Homemaking gets its groove back as youthful Martha Stewart acolytes knit, purl and make curtains. 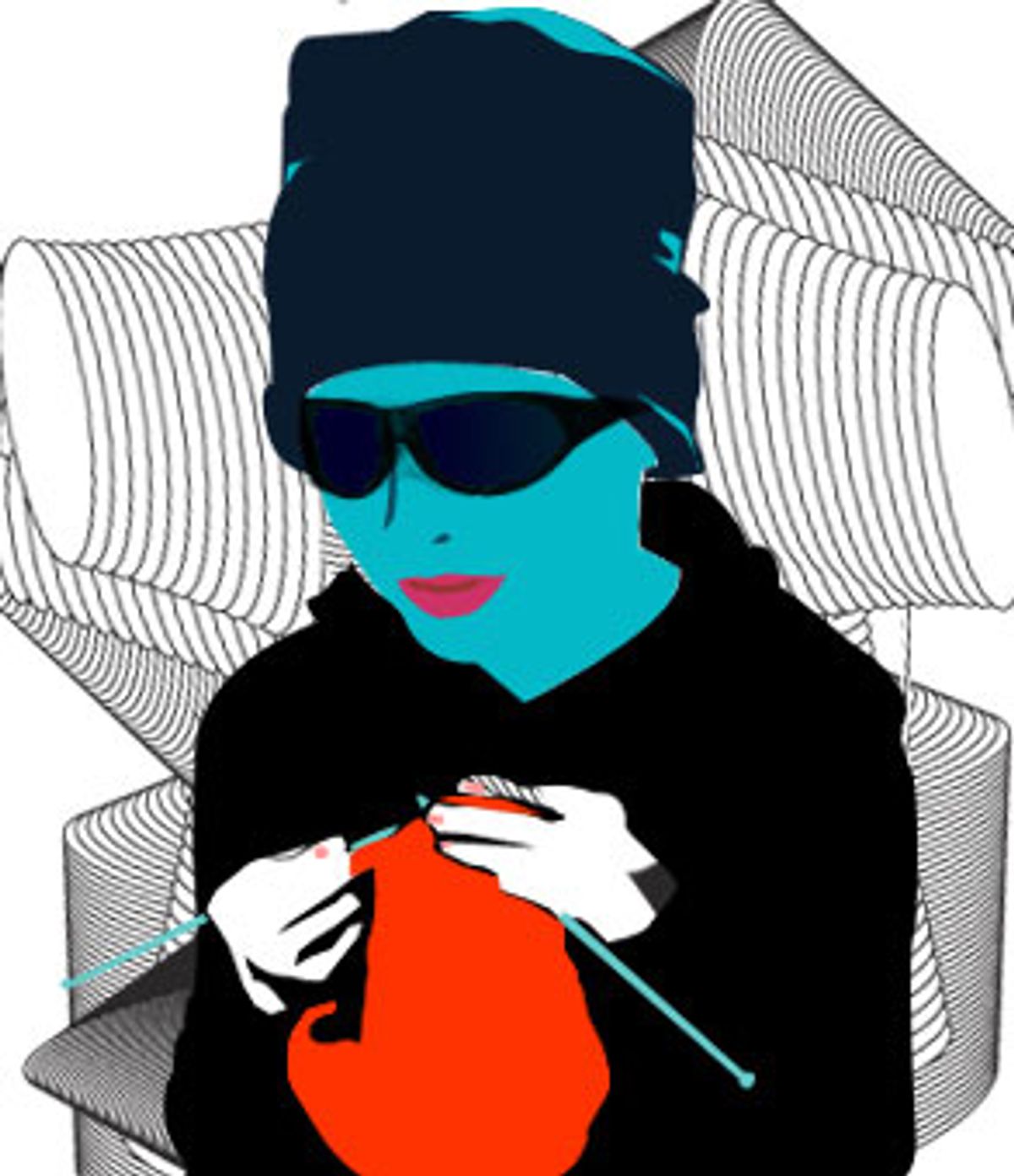 Debbie Stoller, editor of Bust magazine -- the magazine for third wave feminists, riot grrrls, Gloria Steinem wannabes and the "New Girl Order" -- is not necessarily the type of person you would imagine as a stereotypical homemaker. Thirty-eight years old and defiantly independent, she's partial to leopard skin and lace and T-shirts emblazoned with slogans like "Toys in Babeland." She's into drumming, works at a dot-com incubator and loves Joan Jett.

Yet Stoller is fanatical about knitting. She's also big on cooking, sewing and other classic homemaking activities -- so much so, in fact, that she recently dedicated the spring issue of her magazine to the "Womanly Arts." Instead of feminist critiques of sexual identity or abortion politics or the codification of the color pink, Bust's spring issue is all about making your own paper, throwing dinner parties and -- for the truly modern gal -- knitting cellphone cozies.

A revival of domestic do-it-yourselfing and artsy crafting is driving a cultural boom in all things knitted, hand-sewn, superglued and welded. Blame it on Martha Stewart and her relentless rehabilitation of the modern homemaker, or on a prefab digital age that's left design-conscious young adults longing for something more tangible; or perhaps, as Stoller suggests, it's a new feminist reclamation of the traditional womanly crafts.

Whatever the motives, knitting clubs are on the rise, Monica Lewinsky's homemade handbags are featured in Elle, the prom dress tweakers known as Imitation of Christ are the toast of the fashion world and the new hip, not hippie, handmade movement is about to get its very own magazine, called ReadyMade.

"It's skyrocketing off the planet," laughs Grace Cooper, proprietor of the San Francisco yarn shop Atelier, which she opened in the hope of catering specifically to 20- and 30-somethings. "We can't keep enough classes on the schedule for the demand."

An obvious source of inspiration for the New Crafties is pride of workmanship. There also is a whiff of ironic retro cool in wearing a rebuilt '50s housedress or baking pink cupcakes from scratch. But for a lot of these budding seamstresses and boy knitters, there is a vaguely political statement to be made in going public with one's granny skills. Knitting, crocheting or tatting is not something that has always looked particularly hip when one, say, whips it out at a bar.

"I used to feel embarrassed telling people about it -- there's a little bit of coming out of the closet aspect about knitting," says Cheryn Flanagan, a 29-year-old Web designer whose personal fashion tastes run toward platform motorcycle boots, dark jeans and tight black tops. "Which is why no one until recently has knit, I think -- it's got this old maid connotation about it. But people our age are past that, and feel like they can do these things without being housewives."

And this, says Stoller, is exactly the point. The very fact that knitting, sewing, crocheting and other skills of the happy homemaker have been considered too girly to be done in public is proof that these crafts need to be reclaimed by the same feminist movement that initially rejected them. Where early feminists denounced the burdens of homemaking as enslaving and menial, third-wavers are celebrating the ultrafeminine in the spirit of independence and, to a certain extent, rebellion.

"We're supposed to be embarrassed by it, so my immediate reaction is to be proud of it," says Stoller, who learned knitting from her Dutch relatives when she was young, and rediscovered its soothing qualities last year when she was on her book tour. "People would see me knitting on the bus, and I might as well have been churning butter, it was so strange to them. All these things women had been doing for centuries were suddenly under the threat of extinction."

And it isn't just women who are knitting, purling and making curtains. Young men have taken up the homely arts, in particular joining and forming knitting circles. Cooper, for instance, says at least 10 percent of the knitters who shop at her store are male.

More than just handmade scarves and doctored '50s prom dresses, the made-by-me movement is about almost everything that can be produced at home. The popular Web site Getcrafty.com offers tutorials on how to turn an old record into a flowerpot, paint racing stripes on your car or cook up a fruit acid skin peel -- interjected with pro-grrrl rants about financial independence and reflections on domesticity and "Mom's influence."

And the glossy magazine ReadyMade, which launches in July, will offer "instructions for everyday life" to youthful do-it-yourselfers. It will target the same kind of design-savvy crowd that drools over Wallpaper magazine and can identify an Arne Jacobsen swan chair at 50 paces, an eclectic audience that wants to make something that their friends will admire for its cool cleverness, like a bed based on a meat cart, or a wallet assembled from a discarded Fed-Ex packet.

This is a newly affluent generation persuaded by disposable income and hip shelter magazines like Dwell and Nest to be obsessed with the aesthetics of the home. Since cookie-cutter consumerism makes it difficult to be unique when everyone is buying the same Pottery Barn place mats, the new crafties have found a way to express individuality, showcase personal design sensibilities and make a small statement against conspicuous consumption by taking production into their own hands. (And, considering the dot-com downturn, there is a certain financial imperative to homemaking, although more often than not it costs just as much to make something as to buy it.)

"It's about a punk identity," asserts Jean Railla, the editor of Getcrafty.com. "It's about not wanting to be mainstream."

Perhaps ironically, the new craft crowd looks to Martha Stewart as a patron saint. Despite her harpy reputation and Hamptons-appropriate projects, Stewart has elevated the happy homemaker to hipness. This is a woman, after all, who has become one of the most powerful female businesswomen in the world while baking cakes that look like vegetable gardens and making drink coasters out of pansies.

"Not only is Martha Stewart driving this reinvigoration of the domestic arts, but she's repositioning it," explains Stoller. "In the '60s and '70s this was all about making a good life for your husband and your kids. But Martha Stewart is doing it for herself; she doesn't even have a husband and kids at home -- she does it for the fulfillment and the joy of having a nice home."

Stewart advocates simplicity as an aesthetic more than a way of life. She pursues perfection more than peace; her projects display the gloss of graceful ease while disguising impossibly difficult, and frequently expensive, processes. And the final image -- the look -- is everything.

But the new DIY movement is also about simplicity in opposition to fussiness. As she takes the time to make a few objects that are unique and iconic, the average youthful DIYer is living in a railroad flat in downtown Manhattan or San Francisco, more concerned with the best way to mask the scent of cat urine emanating from the downstairs apartment than building a perfect rake for spring gardening. It's less about bourgeois perfection and superficiality, and more about making a unique, individual statement. Still a little selfish, but not, perhaps, quite so traditionally pretentious.

"Martha Stewart's ... for the baby boomers," says ReadyMade editor Shoshana Berger. While magazines like ReadyMade may crib "Living's" "isn't it easy?" boosterism, their projects embrace idiosyncrasy, irony and flaws. Among some of the DIY projects that Berger will highlight in her pages: how to pour concrete at home, how to knit a blanket from your old vintage sweaters and how to perform taxidermy on your favorite (deceased) pet.

And unlike Stewart's middle-aged target market, which probably has at least some familiarity with the home arts, the new do-it-yourselfers are mostly youthful careerists who have spent their lives thus far slaving away at laptops and shopping at Ikea. In an era when the average post-college worker spends 10 hours a day sitting in front of a computer and producing work that only exists as ethereal pixels, the idea of making an actual thing suddenly holds much more appeal. The act of physical creation is a novelty to be explored.

"There's a real yearning for slowing down the pace of our culture, which is run amok. I think in this age of mechanical reproduction people are intrigued by the aura of the original," says Berger, summoning cultural theorist Walter Benjamin.

Or, as Cooper, the proprietor of Atelier, more basically puts it, "Knitting is the exact antidote to what we're living in -- hectic, no product, nothing to touch, nothing soft and cuddly, just staring at a screen all day long. There needs to be relief, and that relief is tactile sensation."

After all, women (and men) who are now in their 20s and 30s are among the first groups that weren't uniformly forced to segregate by sex into Home Ec and Wood Shop. They were inducted into a world where everything that could be made could be more easily purchased, where status was attached to label and brand, not to the level of skill involved in making the object. Unlike previous handicraft revivalism movements -- when things were made because they couldn't be bought; or, as in the '60s and '70s, things were made to demonstrate one's connection to the earth -- today's handcrafting is a self-conscious exploration of something younger generations haven't really known firsthand. It may be a bit political, but it's also intensely personal.

And it is playful. "Both in crafts and DIY culture, it's about play -- activity that's not actively determined by the results. It's about knitting with your friends, not about the scarf -- because ultimately you can probably buy it cheaper in a store," Jean Railla explains. "It's all about the process."