A bloody "Sopranos" season ends with an emotionally bruising finale. 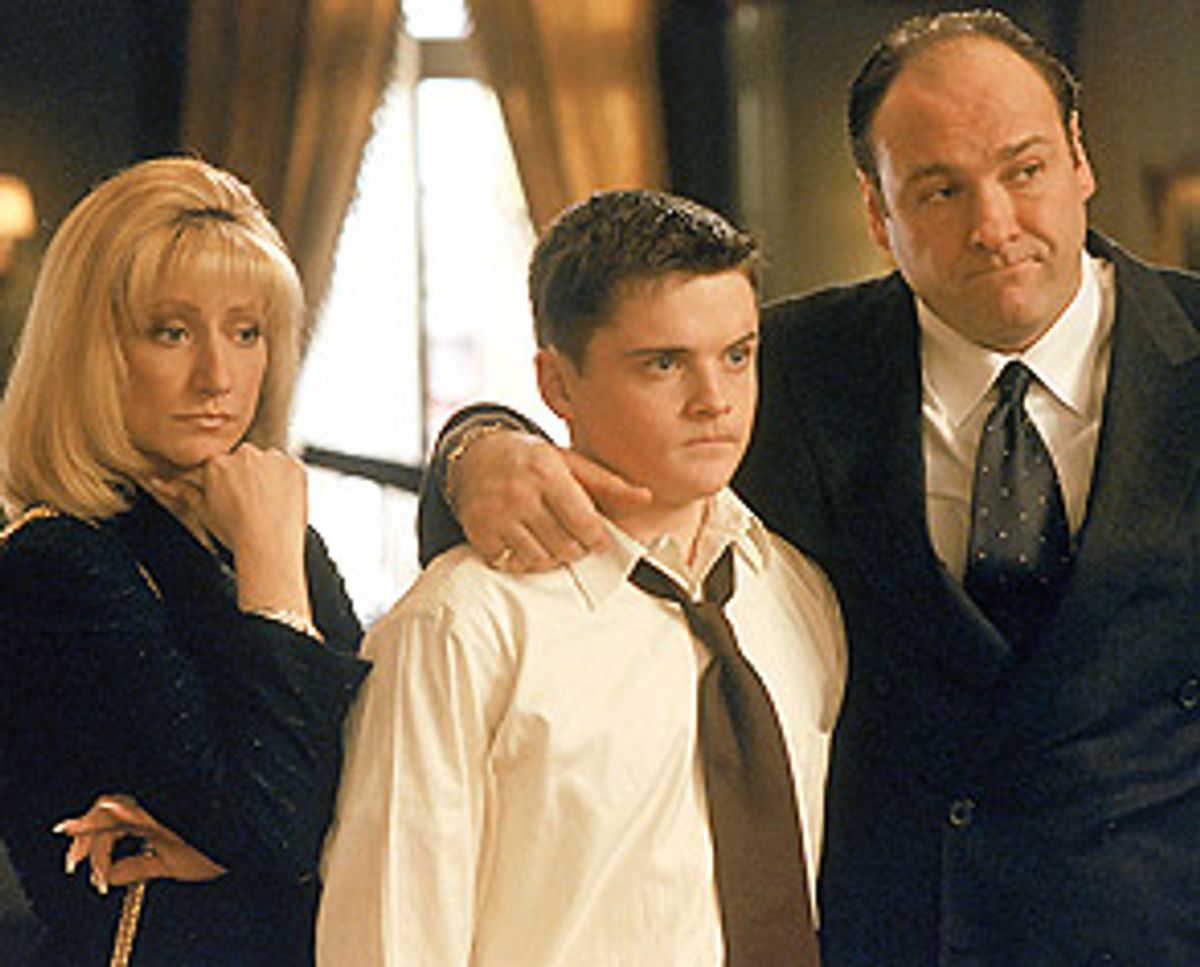 After the sort of season "The Sopranos" had -- bloody, dark, ever-more complicated -- you'd expect the finale to have been a little more explosive. But, like the first two seasons, the third one ended Sunday in an affirmation of family. In the final scene, the whole cast gathered at Artie Bucco's restaurant after Jackie Jr.'s funeral, and listened to Junior Soprano sing a melancholy Italian ballad about an "ungrateful heart." Tears welled up in many eyes as thoughts turned perhaps to the old country, or to a style of song long out of favor, or to broken hearts, ungrateful children and dashed dreams.

Within this tableau, Tony Soprano (James Gandolfini) and his immediate family put on a kind of living puppet show on the theme of ingratitude and insufficiently counted blessings. A drunken Meadow (Jamie-Lynn Sigler), mourning ex-boyfriend Jackie and seething with the suspicion that he wasn't really shot during a drug deal gone bad, threw rolls at Junior (Dominic Chianese) as he sang. As Tony lunged for her, she jumped up and ran out of the restaurant, eluding his grasp, as she's done all season. Back inside, Tony steered Anthony Jr. (Robert Iler), recently expelled from school for cheating, to a protective spot between him and Carmela (Edie Falco). Earlier in the episode, we'd seen Tony near tears in the office of his shrink, Dr. Melfi (Lorraine Bracco), telling her that he didn't know how to save this kid, his dull, soft child of suburban privilege, from falling into the mob life by default. And Tony knows A.J. wouldn't last a day if he did.

And there was Carmela, who watched Junior's performance with oddly dry eyes and a scowl. This season, Carmela grappled with her own ungrateful heart. She was driven to depression by the hypocrisy of her life, drowning in guilt over taking Tony's ill-gotten gains while calling herself a good Christian, and feeling ungrateful toward Tony, who, after all, was a good provider.

The finale, co-written by David Chase and Lawrence Konner, left as many loose ends as it tied up. Paulie (Tony Sirico), in desperate money trouble, is in a panic at seeing his stock falling in Tony's eyes; Tony seems to openly favor his new enforcer, Furio, and sides with sinister Ralph Cifaretto (Joe Pantoliano) in a dispute between Ralph and Paulie. Outside the restaurant after Jackie Jr.'s funeral, Paulie is approached by New York boss Johnny Sack (Vincent Curatola); Paulie seems ready to jump ship. Meanwhile, Christopher (Michael Imperioli), who along with Paulie badly botched a hit on a Russian mobster in the harrowing "Pine Barrens" episode, has also fallen out of favor with his uncle Tony, who rebuffs his attempts to make amends.

Ralph remains a divisive presence, a loose cannon who seems intent on bringing Tony down. Why does Tony continue to mollify him? We'll have to stick around for season four. Uncle Junior has beaten cancer, but his trial on RICO charges is set to begin, also in season four (which will be, by all accounts, the last). The FBI, having failed amusingly in its earlier attempt to bug Tony's house, has just hatched a new scheme to get close to Tony, sending a female agent (the delicious Fairuza Balk) undercover as a big-haired Jersey fashionista with orders to become Christopher's fiancée Adriana's (Drea De Matteo) new best friend.

Those hoping for a violent end to the season (what about all those rumors that somebody major was going to get whacked?) may have been disappointed. But this finale was as emotionally bruising an episode as "The Sopranos" has ever turned out. Since the series began, Tony has been trying to keep order and harmony in both of his families, and the stress is giving him panic attacks. He's largely failing on the home front, but at least his men seem to respect him. But in the finale, you could sense Tony's grip loosening with his old crew, as they bickered with one another, grumbled about him behind his back and questioned his authority. In a burst of misplaced dictatorial heavy-handedness, Tony exploded at the wayward A.J. and Carmela's "Berry Brazelton" parenting and decreed that his son was going to military school.

Like Carmela, Tony is fooling himself -- he can't separate the two parts of his life, or his two families. Where abundant dark humor once arose from Tony the thug's attempts to be New Jersey lord of the manor, this season, Chase and his writers brutally drove home the point that Tony and his associates do very bad things and they take their evil home with them -- it builds their castles, it makes their wives and children complicit.

In one of the most interesting plotlines, Tony's racist comments drive a wedge between Meadow and her African-American and Jewish boyfriend; she eyes her father with silent contempt for most of the season, while seemingly trying to get close to her mother and understand how she can live with a man like Tony. Because she's 18 and doesn't want to admit she doesn't know everything, Meadow goes through psychological contortions, simultaneously trying to piss off her parents and please them by dating Jackie Jr., a Mafia prince fit for a Mafia princess. Tony and Carmela catch a glimpse of Meadow as Mafia wife, and they're both unsettled. This isn't what they wanted for their daughter, whom they've given "every opportunity" -- code for "a chance to get out."

Faced with Jackie Jr.'s reckless and stupid attempts to become a made man -- and the fact that he's lying to and cheating on his little girl -- Tony subtly orders a hit on him, fulfilling the wishful thinking of every father who ever thought no boy was good enough for his daughter.

In the show's most controversial attempt to force doting viewers to see these men for the monsters they are, Chase and company wove recurring scenes of violence toward women throughout the season. Ralph beat his pregnant girlfriend to death; Tony slapped around his difficult new mistress, Gloria (Annabella Sciorra); Tony's sister Janice (Aida Turturro) got herself on the bad side of the Russian mob and ended up with a broken arm. There was a vigorous burst of letter writing to TV critics and HBO, accusing the show of misogyny and pornography. (The Bada Bing girls are naked, in a strip club -- imagine that.) Another scene cited by critics of the show as misogynistic was the disquieting rape of Melfi in the stairwell of a parking garage -- which had nothing to do with Tony or the Mafia, and was an entirely random act.

While all of this violence was tough to watch, none of it was gratuitous. These are bad guys, yet viewers identify with them. And Chase hit upon a powerful way of underlining how different (hopefully) this family is from our own, to make us question our indulgence of these characters, who kill, steal, deal drugs and treat women as either madonnas or whores. We needed to see Tony's rough treatment of the clinging, crazed Gloria to recognize Tony's pattern of desiring playmates who are essentially his mother, not because he wanted to have sex with Livia, Melfi points out, but because this was his futile attempt to please her. In one of the most chilling moments of the season, Tony tried to break up with Gloria (who had made contact with Carmela and threatened to seek out Meadow); he threw her to the floor and she hissed echoes of Livia's words at him: Poor you; I should be silent, like a mute; nobody would care if I died.

Melfi's graphic rape and, more important, her reaction to it, forcefully brought her somewhat vague character into sharp focus. We've sensed Melfi being drawn to Tony's virility and fascinated by the Byzantine violence around him. But now, with her rapist freed on a technicality, Melfi had to decide, finally, whether she was going to be the "good Italian" or fall deeper under Tony's sway. She contemplated sending Tony after the rapist, to "squash him like a bug," she told her therapist. But when faced with the reality of allowing Tony to cross her moral boundaries, she stiffened her resolve, rejected vengeance and chose not to tell Tony about the attack.

While Melfi successfully defended her Tony-free zone, Carmela struggled all season to erect one of her own. In the episode "Second Opinion" (Edie Falco's finest hour), Carmela sought the help of Melfi, who referred her to an aged Jewish shrink who didn't mince words. You are an accomplice, he told her, you take his blood money; leave him. And if you choose to stay, "you can never say you haven't been told."

This season, Carmela and the gussied-up Mafia wives with whom she lunches, and Meadow, and Melfi, were the most emotionally complex, intriguing characters on the show. Chase finally delved into the little deals they make with themselves, their husbands and God in order to live with the lies.

There are the mistresses, for one thing, a necessary evil for Mafia wives, it became clear this season, because they take the blows their husbands would never inflict on the mothers of their children. In a ladies-who-lunch scene drenched in acid, Carmela, who knows Tony has a new girlfriend but hasn't figured out who, listens as Rosalie Aprile (Sharon Angela), widow of a former mob boss and current girlfriend of Ralph, opines that she understands why Hillary Clinton stuck with her husband through "the bullshit." Hillary was planning her "own thing," says Rosalie, and she was ultimately rewarded for enduring her husband's sordid infidelities. "She's a role model for all of us," Carmela agrees. And, indeed, Carmela did finally seem to be planning her own thing (we see her poring over real estate exam books), and erecting boundaries between Tony's work and her life -- she ditched the enormous sapphire ring he bought her (out of guilt after sleeping with Gloria).

The finale left many questions, small and large, hanging in the air, the most tantalizing of which had to do with family, not la famiglia. How far will Carmela go to seek her independence and save her soul? Can Tony make the necessary sacrifices to ensure that his children don't end up married to the mob or in it? At the end of the finale, Junior's song morphed into several other songs, sung in other voices, in French, Chinese, Spanish. Again, Chase seemed to be asserting the universality of the Sopranos' dilemmas. But for the first time, that universality rang false. What was most compelling about "The Sopranos" this season was its tight-focus specificity. These were the problems of one family -- husband, wife, daughter, son -- trying to figure out where their relationships begin and end.