"Shrek" is not Shrek!

William Steig's subversive misanthropy is jettisoned for winking innuendo in the movie version of his children's book. 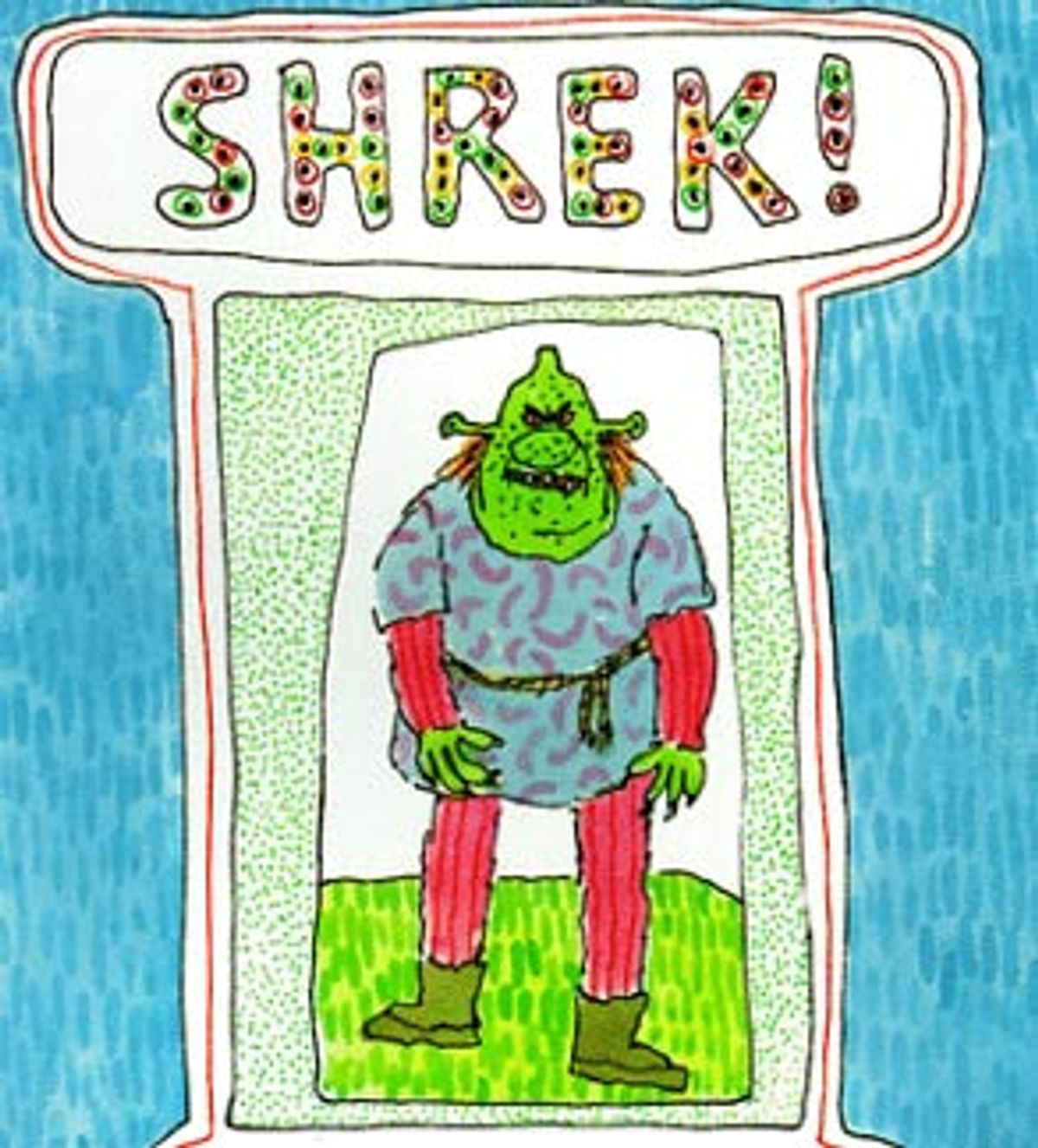 The hallelujah chorus has begun. Since it opened last week, "Shrek" has become a box-office hit, with the second highest debut for an animated film after "Toy Story 2." Entertainment Weekly calls it "a feisty but good natured embrace of the inner ogre in everyone." Variety deems it "an instant animated classic." And the Washington Post says it's, well, "perdurable." There are dissenters: Some critics have chafed at the potty humor and the Disney-bashing industry in jokes, and in the New Yorker last week, Anthony Lane smartly questioned the merits of realism as "the Holy Grail" of computer animation, especially at the expense of genuine fairy tale charm.

But in this sea of media attention, one small detail seems to have gone unremarked: Has no William Steig fan noticed that "Shrek" is not Shrek? That the book on which the movie is based does not feature a sensitive hero, an incarcerated princess or a host of abused Disney characters fated for "resettlement"? That the directors have traded the subversive misanthropy of Steig's 1990 book for a Hollywood ending? That the animators jettisoned Steig's wonderfully loopy illustration style so they could join the digital race to realism? Or that the film doesn't feature a single line of Steig's crotchety dialogue? Not even Shrek's masterful ode to his blue-lipped mistress: "Your horny warts, your rosy wens/like slimy bogs and fusty fens/thrill me."

Why even call this movie "Shrek"?

The beauty of Steig's story is in Shrek's devilish enjoyment of his hideous world. When his parents kick him out of "the black hole in which he'd been hatched," Shrek, "giving off his awful fumes," sets out to do "his share of damage." Steig writes, "It delighted him to see the flowers bend aside and the trees lean away to let him go by." (Animate that.) Along the way, in exchange for a few of his "rare lice," a witch tells his fortune:

"A donkey takes you to a knight/him you conquer in a fight/Then you wed a princess who/Is even uglier than you."

He meets a peasant ("You there, varlet ... why so blithe?") and steals his dinner, then dispatches a dragon with a blast of putrid blue flame between the eyes. His darkest moment comes during a nap in which he dreams he's in a field of flowers with children frolicking around him. "Some of the children kept hugging and kissing him, and there was nothing he could do to make them stop. He woke up in a daze, babbling like a baby: 'It was only a bad dream ... a horrible dream!'"

Shrek finds his "jabbering jackass" and rides it to the castle of the repulsive princess, where a knave greets him: "Magician's mercury, plumber's lead/I smite your stupid, scabby head." With a blast of fire, Shrek overwhelms him and enters the castle, where he sees a hall of mirrors containing hundreds of appallingly hideous creatures. He regards his many selves, "full of rabid self-esteem, happier than ever to be exactly what he was."

Fortified, he meets his stunningly ugly princess, and they exchange fetid compliments. ("Oh ghastly you/With lips of blue/Your ruddy eyes/With carmine sties/enchant me.") When they marry, she wears a cloak covered in spiders and carries a cactus, and they live "happily ever after, scaring the socks off all who fell afoul of them."

Steig's story is gently menacing, unsentimental and harmlessly deviant from start to finish. The movie is winking and cynical. (What is a kindergartner to make of a gingerbread man yelling "Eat me" at a man torturing it? My daughter hated this scene for its meanness. I hated it for going over her head in the service of a bad pun.) But once the sardonicism is exhausted, "Shrek" winds up in a bog of emotion, cheapened by what came before.

While Steig's romance hinges on the lovers' mutual appreciation of their inverted values, the movie restores traditional values and, worse, tacks on a threadbare moral that Steig never inflicted on his readers: You can't judge a book by its cover. If there's one thing a Steig book will never do, it's preach. This kind of stop 'n' shop sanctimony is, to paraphrase "The Toy Brother" -- another fine Steig book -- a first-rate pain in the pants.

Children love Shrek's upside-down world for its pure illogic; overlaying it with pedagogy just drags a good story down. And the moral isn't even consistent: If looks don't matter, why is Lord Farquaad's (John Lithgow) towering ego offset by his short stature, and why does Fiona (Cameron Diaz) immediately disdain him for his size instead of his cruelty?

And the characters are all wrong. Mike Myers' Shrek, charming as he is (OK, those expressive, tuberlike ears slayed me), is a sensitive guy in ugly casing; the storybook Shrek is a bumbling brute inside and out. And Fiona isn't ugly, even when she's supposed to be. Even at night when, because of a spell cast on her as a child, her ogre self emerges, she looks more like an overfed Cabbage Patch doll with the drowning eyes and apologetic expression of a Hummel figurine than like Steig's confidently wretched crone. (On the other hand, that she farts and burps, fights and talks back, and remains an ogre in the end is something for the history books.)

Consider the landmarks of animated film history and their female content: "Snow White and the Seven Dwarfs" (1938), the first animated feature and a spectacularly beautiful film, introduced a helium-voiced heroine who apologizes for crying after being kicked to the curb and nearly murdered (Deborah Tannen, white courtesy phone); her defining moment comes when she sings "Someday, my prince will come." Next, "Toy Story" (1995), the first computer-animated feature, chock-full of memorable characters and madcap adventure, and witty, well plotted and funny, yes, in that "all the females on earth are inexplicably missing" way.

And now "Shrek," the first computer-animated movie starring human characters, a feat of realism that marks the flowering of the digital age, which offers ... an imprisoned princess, in cold storage for marriage. Radical. Even 93-year-old Steig didn't write a damsel in distress into his story when he penned it over a decade ago. While Fiona's dramatic bust-to-waist ratio is certainly an animation coup, shouldn't a computer age princess be free?

Finally, the Disney jabs in this movie generate as many problems as laughs. Once producer Jeffrey Katzenberg gets his revenge on his former employer through the Mauschwitz opening scene, the conceit of the homeless characters and their predicament is dropped, leaving a conspicuous loose thread. And if memory serves, Eddie Murphy already did that jivey, ingratiating sidekick routine as Mushu in "Mulan." One wonders first why DreamWorks used a secondhand minstrel show -- and second, why Disney's?

"Shrek" has its moments -- Leonard Cohen's "Hallelujah" and Fiona's hilarious ear-scraping vocal solo among them -- none of which are remotely connected to the book. It even features some tender scenes of natural wonder that seem to have wandered into the script out of other Steig books, like "Gorky Rises."

But while Steig's Shrek spoofs European fairy tales, the movie skewers Disney fairy tales -- a pasteurized genre unto itself that would need more than bathroom humor for really stinging satiric effect. The idea that because parents have wearied of fairy tale earnestness kids need a good dose of postmodern irony is just wrong. At the ripe old age of 5, my child doesn't need her icons smashed just yet, thanks. And call me hopelessly altruistic, but I'm willing to sit through a movie with her even if it isn't outfitted with a meta-narrative for my jaded-boomer parallel enjoyment.

Instead, give me the 1996 Children's Circle Video "The William Steig Library." It doesn't have the promotional machine behind it that made "Shrek" a monster hit, but it does include four animated Steig stories (two featuring Lithgow), with plot, dialogue and visuals intact, and an interview with the author in which he extols the importance of talking to kids on their level.

Margot Mifflin is an assistant professor in the English Dept. at Lehman College/City University of New York. She is writing a biography of Olive Oatman called "The Blue Tattoo: The True Story of a Victorian 'Savage'."