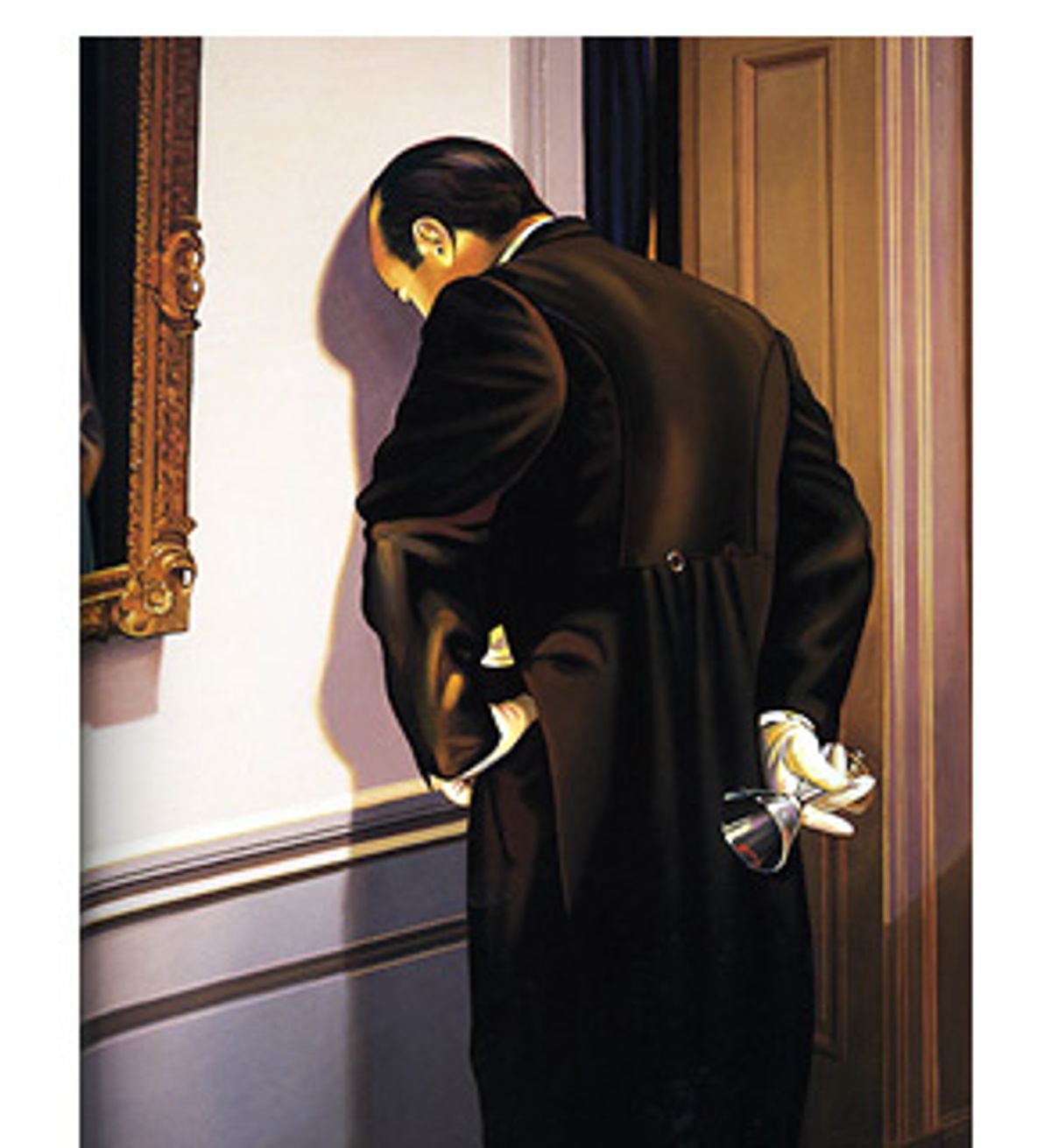 Mark Stock, 50, is an artist in Oakland, Calif., best known for paintings that deal with romantic obsession. He creates large works (often 57 by 46 or 74 by 64 inches) that close in on people feeling lust, jealousy, voyeuristic obsession or guilt at having just committed murder.

Your most famous painting is "The Butler's in Love --Absinthe" (1989) that is up in Bix restaurant in San Francisco, where everyone is sipping martinis and the décor is film noir. What is the story behind that painting?

I was contacted by my art dealer, Martin Muller. He was throwing this lavish, black-tie dinner party to celebrate Barnaby Conrad's new book, "Absinthe: History in a Bottle," and it was going to be held at Bix, where I had never been. I was living in Los Angeles. Martin strongly suggested that I do a painting or a pastel that he would hang over the piano, just for the evening. At the time I was already painting my series "The Butler's in Love," so I thought, Why not do one of the butler, painfully scrutinizing a lipstick-stained absinthe glass, silently in love with the woman who drank from it? Martin liked the idea and said, "Can you get it done by the end of next week?" I thought he was crazy but I said I'd do it. I hung up the phone, grabbed my camera and put it on a tripod, threw on a tuxedo and white gloves and took pictures of myself in various poses. I finished it in just a few days, and the paint was still wet when it was shipped to San Francisco. It was hung and bought by the owner of Bix. I think about how I almost didn't do it -- and now it's my most famous work. It taught me a lesson about seizing the moment.

Your work seems to be infused with obsession -- men spying on women, clowns grabbing ballerinas behind stages, women looking through peepholes -- where does that come from?

I was told, as a young boy, that I was this soulful, melancholic child. At 11 I was writing poetry, drawing, playing my guitar and singing for my girlfriend Gail. I was deeply in love, obsessed. I had already failed first grade and almost third grade, but I was more interested in how I was going to hand my recent love letter to Gail on the playground. This longing, this obsession, is still with me and now I paint it.

All of the paintings about love, like "Lovers and the Guest" and "The Tryst," seem a bit surreal and dangerous, like scenes from a dreamy mystery novel or movie. Why is that?

Novels, movies and hopefully painting draw people away from ordinary life. They accentuate life -- its sensuality and its danger. We go to movies to be taken on a ride somewhere we can't go but would like to. Many of my images are inspired by films. I may see one quick scene and will borrow its concept and twist it to fit my psyche.

Do you usually work from photos?

Yes, and it's probably the most enjoyable part for me in making a painting. I get an idea and then I find a friend who fits that part, who has the look. I direct them like we are shooting a scene for a movie, but I photograph it. The composition of "The Guest" was inspired by Hitchcock and Woody Allen, in the way they frame their shots. My story line involves infidelity. The man seen past the door is her husband. I know ... it's terrible.

And what about the connection between love and death? Murder seems to be on your mind.

I've always been interested in what drives someone to murder, and what drives us to love and sex. Although one is more destructive than the other, they both share an obsessive state of mind. In "A Double Life" we see a woman having a cigarette, sitting, almost hiding, like a child behind a couch. She is trying to figure out what her next move will be, how she will dispose of the body rolled up in the rug. This was one of eight paintings I did that depicted a domestic murder.

Do you think there is such a thing as wholesome, everlasting sweet love, or is it always tinged with darkness and pain?

I would like to think that everlasting sweet love is possible, but I haven't experienced it in my life and have had no examples of it growing up. No matter if it's a girlfriend, wife, house, car or money, we all desire what we don't have.

Walking up Columbus Avenue [in San Francisco], I looked in the doorway of one of these adult establishments where they offer a one-on-one "conversation" with a nude girl through a window in your private booth. I returned the next day and took a picture. In my studio I photographed my friend in her bra and panties looking bored out of her mind, and put her in the booth in the painting.

The clown and the ballerina ["The Kiss"] is scary. It makes me think of that song lyric -- "The Candy-Colored Clown They Call the Sandman" -- and its connection to the movie "Blue Velvet."

Well, it's a harlequin, not a clown, but "Blue Velvet" is one of my favorite movies. When the Jeffrey character in the movie enters the blue lady's apartment disguised as the bug man, he's trying to gain information, to solve a mystery. I can relate to that. But "The Kiss" is a more optimistic view of life, of love, of passion. At the end of Chaplin's "Modern Times" Charlie walks into the sunset with the girl on his arm -- for once! In "The Kiss" the harlequin is an extension of Chaplin's Little Tramp character. It shows the usually tragic figure who for once succeeds.

The underlying theme of most of my work is love and sex and the longing for it. The amount of time in our lives that we think about sex -- if we could have only been productive at those times, how much work we could have done! The thought of sex consumes us, especially in a new relationship, and even in an old one that you can't let go of. I think about it frequently, so it appears in my work.

Unrequited love seems most interesting to you.

For me, unrequited love is more interesting to look at, to think about and to develop themes from for my paintings. Regarding life in general, the struggle to make it to the top is far more interesting than finally being on top. I read somewhere that "hell is when all your dreams come true," which I believe.

Can men and women be together without wanting to murder each other?

Nothing engenders more powerful emotions than desire. In some people, if that desire is betrayed the results can be deadly. Fortunately most of us simply move on.