Olson by a whisker

In a surprising reversal of fortune, before relinquishing control of the Senate, Republicans force a vote on the controversial solicitor general -- and win. 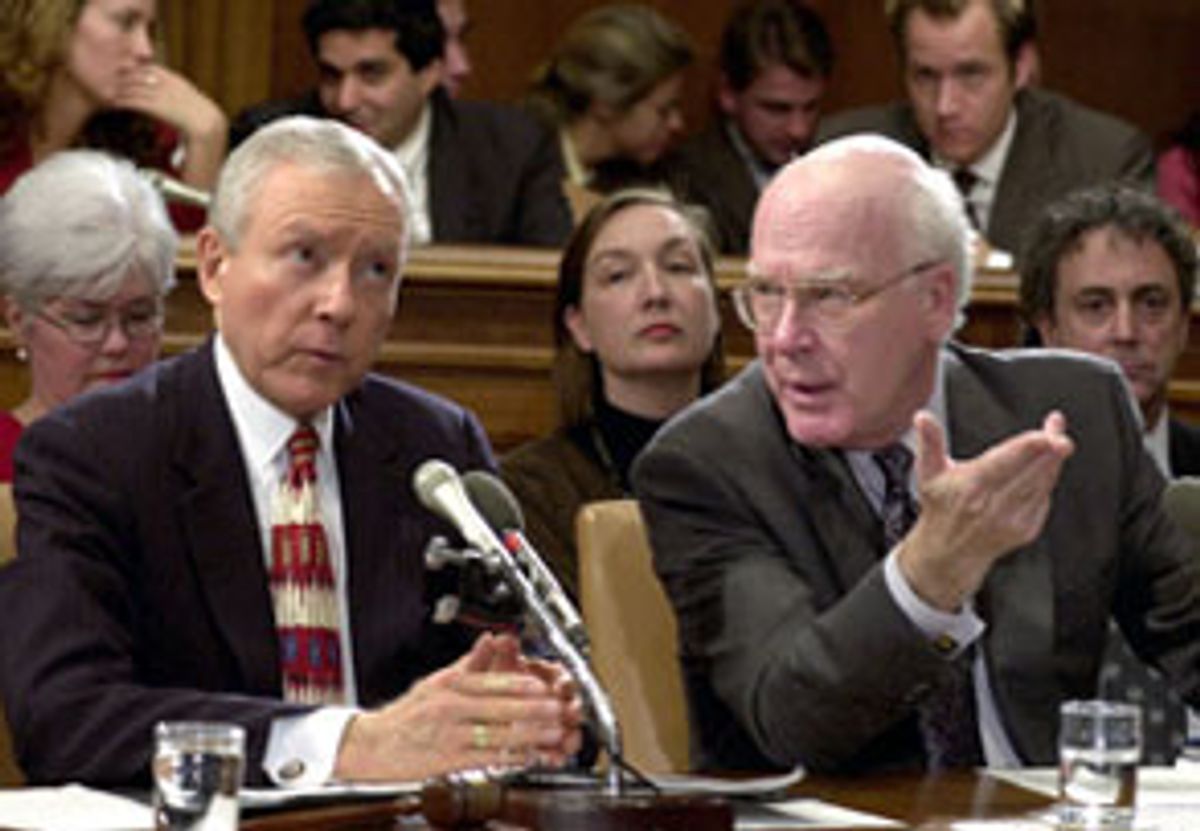 As the clock on solicitor general nominee Ted Olson wound down, Republicans took a bold final shot, and Democrats, perhaps already satisfied knowing that they would soon be the new majority party in the Senate, made only a token effort to block it, and Olson won by a 51-47 vote.

While it might have looked like the Democrats were firmly opposed to Olson's nomination, the party, according a senior Democratic staffer close to the proceedings, could not recruit the requisite number of 41 to support a filibuster to hold up the Olson nomination. So when the roll call finally came, only two Democrats (Sen. Zell Miller, D-Ga., and Sen. Ben Nelson, D- Neb.) voted for Olson, but the other 47 who voted against him already knew he was a sure thing.

Olson's success was a remarkable reversal of fortune. When word spread earlier in the week that Sen. Jim Jeffords, R-Vt., would be abandoning the GOP to become an independent, it slowly became clear that the Democrats would win control of the Senate, and Olson's chances began to look grim. Sen. Joe Biden, D-Del., predicted Wednesday that, under Democratic Senate rule, "Ted Olson will be practicing law, making a lot of money" in the private sector.

By Thursday morning, Margaret Aitken, Biden's press secretary, tried to soften her boss's earlier statement. "I don't think it's really clear yet how it's going to shake out," she said. "I think it is too early to speculate about that."

Actually, it was already too late.

In less extraordinary times, Olson's nomination would already have been long dead. On May 18, the Senate Judiciary Committee split 9-9 over Olson, with Democrats still loudly questioning his answers under questioning about his ties to the Arkansas Project, the anti-Clinton scandal-hunt run through the American Spectator and funded by Richard Mellon Scaife during the mid-1990s. In ordinary times, a tie vote is a losing vote in the Senate. But the Republicans and Democrats in the evenly split Senate had agreed in December to allow Senate Majority Leader Trent Lott, R-Miss., to break such deadlocks by filing a "discharge motion."

Lott did that last week, so Olson's nomination could've been moved to the floor any time after that. But committee Republicans, in deference to continued Democratic complaints and possibly in fear of a filibuster, allowed the minority members to continue probing Olson.

But when it became clear that the Democrats would assume control of the Senate, Lott set the Olson vote, frustrating opponents, including a prime target of the Arkansas Project. "It strikes me as a desperate measure," New York Democratic Sen. Hillary Rodham Clinton told reporters, accusing the GOP of "try[ing] to jam this through while they still control the floor."

For Clinton, this nomination was personal. While Republicans publicly accused Democrats of opposing Olson purely for his role in successfully representing George W. Bush before the Supreme Court in the decision that effectively awarded Bush the presidency, they shied away from the virulent role the Spectator -- and Olson -- played during the 1990s as a critic of the Clintons. Olson himself, writing under a pseudonym, coauthored an outlandish article outlining the possible crimes that had been committed by President Clinton and Hillary Clinton and how stiff the penalties might be for those crimes. His wife, former federal prosecutor and conservative cable-TV pundit Barbara Olson wrote "Hell to Pay," the bible of anti-Hillary books among the far right, in which she described the former first lady as a woman "who has gone to the brink of criminality to amass wealth and power."

Clinton made an appearance before reporters to attack Olson, a man she said didn't "meet the standards that we should expect from somebody nominated for solicitor general."

But as the day wore on, even Leahy's office began to downplay the need to continue with a probe. "The bipartisan inquiry has gone on all week," said Leahy's press secretary, David Carle, when asked if the vote would cut off the probe prematurely. As for whether all Leahy's questions about Olson had been answered, a flustered Carle replied, "Yes."

But the committee planned on asking more questions for David Brock, an American Spectator reporter who has been the chief source contradicting Olson's account of his involvement with the Arkansas Project. The Spectator was the home of Scaife's effort. In recent weeks, Brock has offered a far different account of the project and Olson's part in it than the nominee had testified to, and Brock's words provided a foundation for the suspicions of Democrats. As a result, Hatch had issued an invitation to Brock on Tuesday to speak to Senate investigators as soon as possible, but a date was never scheduled.

Investigators also didn't get a chance to hear from Ronald Burr, former publisher of the American Spectator who left the publication in a cloud reportedly after criticizing the Arkansas Project. Salon has previously reported that Burr, after receiving a $350,000 severance package from the Spectator, signed a non-disclosure agreement that prohibits him from making public statements about the company.

Though Burr hasn't spoken for himself, Ralph Lemley, his advisor and friend at the time of departure from the Spectator, declared earlier Thursday in a letter that Olson had been a part of the Arkansas Project from the beginning, and that Burr was pushed out of his post because he objected to the Arkansas Project, and had asked for an internal "fraud audit" of the enterprise. Salon obtained and published that letter on Thursday afternoon, about an hour before the Senate voted to confirm Olson. Lemley had earlier sent a copy of the letter to the Judiciary Committee, but after discussion had already begun on the floor of the Senate.

Had that letter come out earlier, according to Clinton spokesman Jim Kennedy, it may well have affected the outcome. "The Republicans seemed eager to cut off any further inquiry," he said. Kennedy added that the quick vote virtually ended Democratic hopes to engineer a filibuster. "There just wasn't enough time," Kennedy said.

That could account for the tone of grumpy resignation that characterized Leahy's remarks after the Olson vote. "We could have held him up forever," Leahy hypothesized before reporters outside the Senate chambers. But Leahy, putting a brave face on defeat, said that he didn't want the first Democratic Senate majority since 1994 to take over in an atmosphere of gridlock. "I don't believe in doing the kinds of things they did for six years," he said.

Biden -- predicting Olson's doom just a day earlier -- seemed anxious to put the fight in the past. "What's done is done," he said, leaving the Capitol. Sen. Ted Kennedy, D-Mass., struck a more defiant stance, claiming that the 47 votes against Olson would "send a message" to Bush. "It proves that we will not be a rubber stamp for his nominees," he said.

Meanwhile, Olson's conservative allies were celebrating his good fortune. R. Emmett Tyrrell, editor in chief of the Spectator, responded angrily to inquiries for a reaction. "You have never run anything accurate in Salon magazine about me, Ted Olson or the so-called Arkansas Project," he said. Wladyslaw Pleszczynski called inquiries about the Arkansas Project "a ghoulish, nightmarish attempt" to rewrite the history of legitimate Spectator criticism of the Clintons. He described the experience as "Kafkaesque."

Salon published investigations in 1998 that first raised questions about the Arkansas Project and its dealings with David Hale, the controversial main witness in the Whitewater investigation against the Clintons. The relationship between Hale and the Spectator was ultimately the subject of a federal investigation. Olson's relationship with Hale, whom he represented when Hale fought a federal subpoena, was also a subject of the federal probe. The articles in Salon, as well as "The Hunting of the President," a book by Salon columnist Joe Conason and Gene Lyons, were frequently used in documents that Leahy presented to bolster his case against the Olson bid.