I was happy to pay $9.95 to listen to baseball on the Web. But what I got for my money was a lesson in how little regard the game has for its fans. 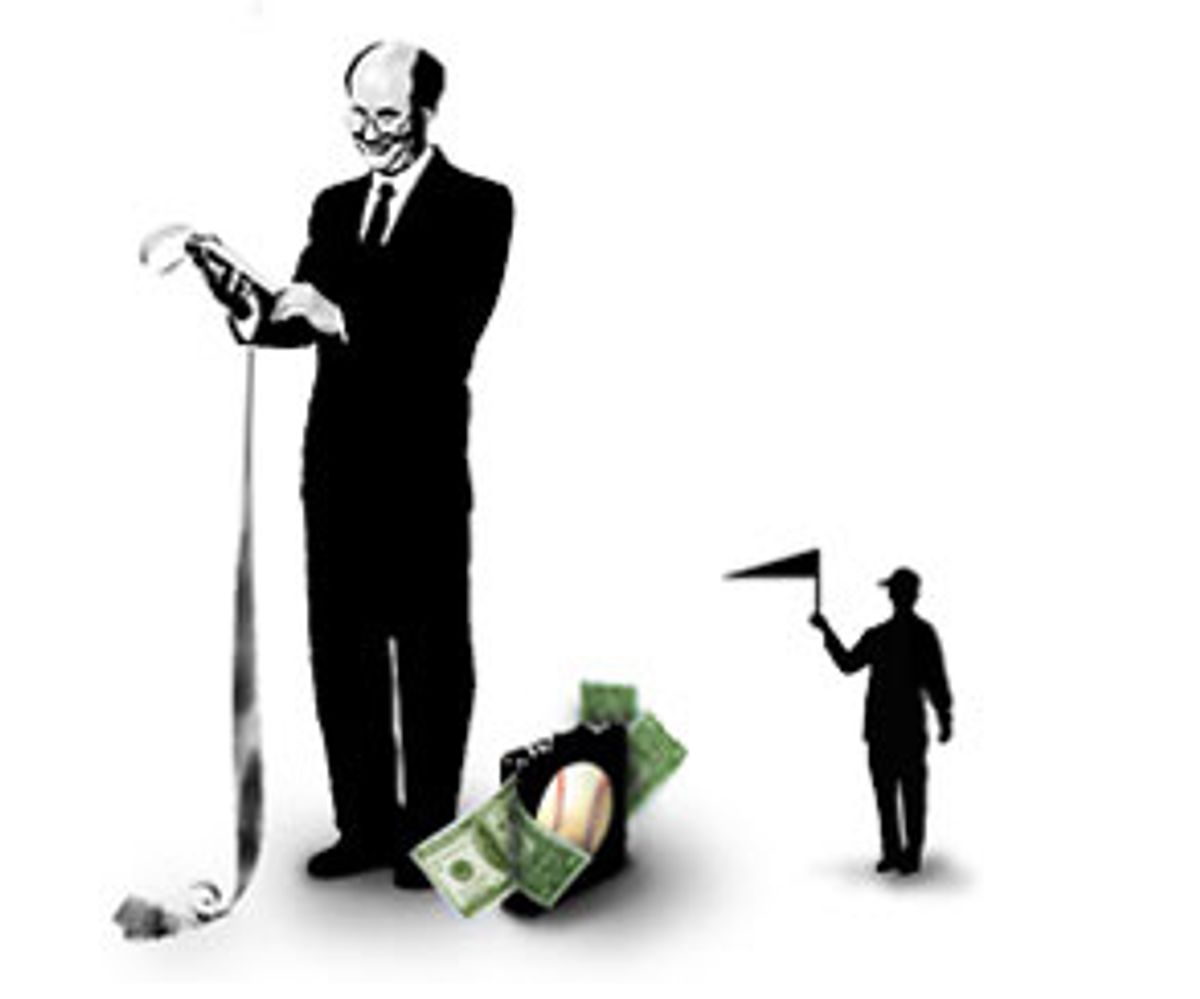 Listen: All I wanted to do was hear some baseball games from other cities on my computer. This pastime, a favorite of mine, used to be free, back in the heady days of the free Web -- that is, through the first week of April, in the case of baseball.

But this spring Major League Baseball announced an exclusive deal with Real Networks under which fans would have to pay $9.95 for a season's pass into the virtual audio ball yard. To which I said, and still say: No problem. A lot of baseball fans are squawking, but 10 bucks for seven months' worth of anything seems reasonable enough to me. For seven months' worth of Harry Kalas and Ernie Harwell and Jack Buck and Vin Scully, it's a bargain.

Baseball even threw in a $10 discount at the MLB.com store. Hey, I can get a Tampa Bay Devil Rays authentic logo baseball and a Montreal Expos Lil' Sports Brat key chain for that. Here's my money.

The service had worked fine for me during the free week at the start of the season, and it worked for a few days after I signed up on April 26. But then the same thing happened to me that's happened to thousands of other MLB.com customers: The service disappeared. It didn't recognize my password when I returned the next week to listen to a game. I used the "Forgot Your Password?" function, and the Web site sent me a new one, which worked to get me into the "My Account" area so I could restore my original password, but didn't work to get me any audio. Instead, I was taken to a page where I was invited to sign up -- for only $9.95!

It was at this point when I discovered that one thing Major League Baseball doesn't do too well is customer service.

I trolled around MLB.com -- which I find to be clumsy, slow-loading and poorly designed -- found a customer service e-mail address and sent an e-mail on May 5, a Saturday. It bounced back to me on Monday with a failure notice that read, "Sorry, your intended recipient has too much mail stored in their mailbox." (Baseball's not to blame for that grammar, which I'm attributing to political correctness anyway. The message came from Chek.com, an e-mail management company.)

I found a few other e-mail addresses around the site and began sending daily messages to them in various combinations. "Hello," they all began. "This is my daily e-mail complaining that the Internet audio service is not working." I then explained my situation, gave my customer number and order number from my receipt and assured the phantom person who would probably not be reading the message that I had all of the recommended applications (Internet Explorer 5.0, RealPlayer 8 Basic) installed and in working order. Aside from the opening sentence, I mostly avoided the temptation to be snarky. I'm quite sure mine were among the more polite letters MLB.com received, or didn't receive, as the case may be.

The only reply I got to any of these were failure notices, for about half of them. The rest simply disappeared into the ether. Meanwhile, Ichiro Suzuki got a hit in game after game, Sammy Sosa hit his 400th homer and A.J. Burnett walked nine while throwing a no-hitter, all missed by my ears. I began corresponding with Cleveland Indians fans who told me that in April they'd kept getting Cleveland Cavaliers basketball games when they clicked on the link that was supposed to take them to the Indians game. I found this shocking. Who knew the Cleveland Cavaliers still existed?

Someone on a Yahoo message board told me about the toll-free customer service number MLB.com had posted about a week after my troubles began, which hadn't been there when I'd searched the site. This person said she'd gotten help at that number. I called it on May 18 and left a message. I also decided to cheat. I put on my reporter's hat and called MLB Advance Media, the division that runs the Web site and audio service. I figured I could ask what baseball was doing about the Internet audio snafu I'd been hearing about as well as experiencing, maybe get some statistics -- how many had signed up? How many complaints? -- and, while I was at it, get some custom help with my own problem.

It was at this point that I discovered that one thing Major League Baseball doesn't do very well is press relations -- unless it's trying to sell something.

Prior to this season, I had received several phone calls and e-mails inviting me to participate in a conference call announcing the MLB.com-Real Networks deal. Major League Baseball was certainly easy to get ahold of that week.

I was transferred to Jim Gallagher, the senior vice president of communications. At first, he didn't seem to understand that I was a reporter, calling to ask about the problems generally as well as my own trouble. I was clear, but I'll mark it down to an honest misunderstanding. Once I stopped him from transferring me to tech support and asked him about the number of complaints MLB.com had been getting, the conversation went like this:

Gallagher: There have been a variety of problems, some on the users' side, some on our side.

Kaufman: What are the ones on your side?

Gallagher: [Pause] You know what, King? I'd rather get a technical person to explain them to you.

He went away, came back, said he wasn't able to find the person he wanted, took my number and said, "Great, call you right back." He did call me back -- two days later, at around noon my time on Sunday. Again, I'll give the benefit of the doubt here: Perhaps Gallagher thought the number I'd left him was my home number. Maybe some people think midday Sunday is a good time to reach someone at work. (A customer service guy, by the way, left a message on Saturday.) On Monday I called Gallagher back and left a message with his assistant.

Listen, I don't want to bore you any further with my reporting troubles. That kind of thing happens all the time. And I did eventually get my customer service situation ironed out. Guess what: It was my fault. I was using the wrong log-in name. But I've made that mistake before on other sites, and I know it's a pretty common mistake because of the way other Web sites are set up to handle it. It simply shouldn't take three weeks to get ahold of someone who can straighten it out.

Here's my point: With this Internet audio deal, baseball is doing a great job of reinforcing its image as a money-sucking juggernaut with little or no regard for the fans who make it go except when it's time to milk their wallets. Once baseball had my $9.95, baseball had no interest in me.

"We have 120,000 subscribers. What, we had 200 people complain?" Gallagher said to the Los Angeles Times on May 12. "That's not a lot when you look at the whole picture. On the other hand, our goal is to not have any complaints."

Yeah, 200 people. And how many thousands whose e-mails, like mine, have either bounced back or been ignored? Gallagher need only look at MLB.com's own Fan Forum message boards to see plenty of griping. A lot of people just can't stomach the idea of paying $9.95 to listen to radio broadcasts, which they feel should be free, but beyond that, the technical complaints by people who have signed up are voluminous.

"I finally broke down last week and forked over the $10," one fan wrote late last week, "only to find, guess what ... no games!" The fan then went on to describe experiences very much like mine. "You know, MLB, if you're going to make people pay for something they used to get for free," the post continued, "you should be *improving* the quality, not making it worse." There have also been complaints about technical glitches, including poor audio quality, dropouts and disconnection. "Strange," one recent poster said, expressing a common opinion, "it worked fine in spring training when it was free."

It's gone mostly unnoticed, but when Major League Baseball, in an effort to cut expenses, took over all the different teams' individual Web sites this year and combined them under the MLB.com umbrella, it was the first real example of what many, this observer included, believe is the answer to many of baseball's woes: revenue sharing. The teams, which formerly ran their own sites, a few excellent, many horrible, still have autonomy within the template over what appears on their site. But financially, everybody's in the same boat.

The argument for revenue sharing is that there wouldn't be haves and have-nots anymore. The woeful Montreal Expos, for example, working with the same resources as everyone else, would have a shot at building a consistent winner. Everybody would have a chance to be the New York Yankees.

But if revenue sharing is eventually implemented, and it results in anything like what this first foray has produced -- a mediocre Web site and a glitchy audio service with poor customer support -- we can look forward to a future where everybody is the Montreal Expos.