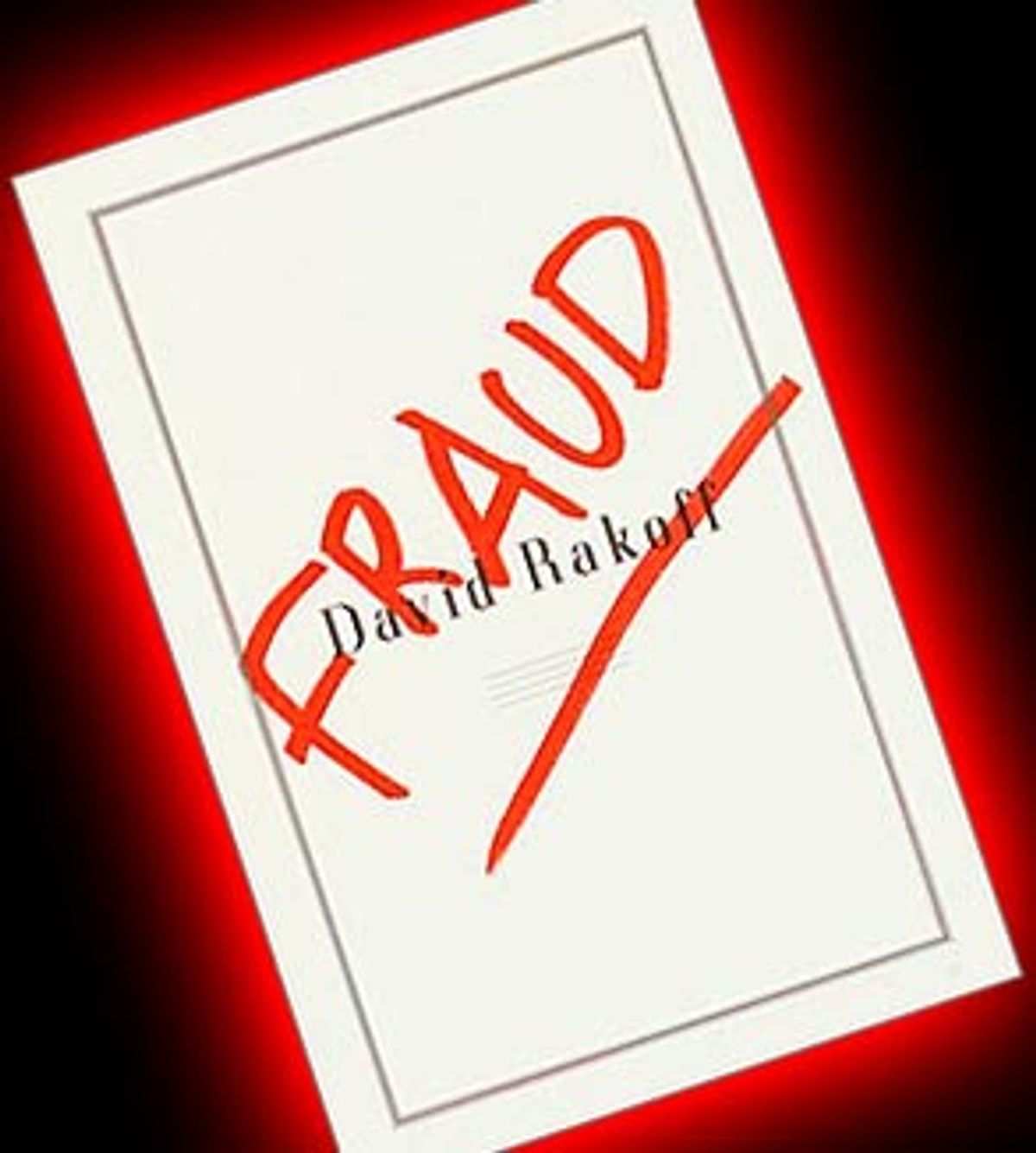 When the going gets rough, David Rakoff gets funny.

In fact, Rakoff tells us in the final essay of his new book, "Fraud," the year back in his early 20s he spent fighting Hodgkin's disease -- a cancer of the lymph nodes that he says is "so highly curable that I like to refer to it as the dilettante cancer" -- was his "very funniest" year ever.

"This was not the Humor of Cure; it had nothing to do with the healing power of laughter," he writes. "It was more of an airless, relentless kind of quippiness -- the orchestra on the Titanic playing an upbeat number as they take on water. Every time a complex human emotion threatened to break the surface of my consciousness, out would come terrible cleverness."

But if Rakoff admits to using humor to deflect emotion, he also uses it to evoke it. In this collection of essays, many of which were originally written for Public Radio International's "This American Life" and magazines like GQ and Outside, Rakoff, who has also written for Salon, puts himself into all sorts of alien environments. He climbs a mountain with macho New Englanders on Christmas Day, looks for Iceland's mythical rock-dwelling "Hidden People," studies Tibetan Buddhism with Steven Seagal (yes, that Steven Seagal) -- and to each endeavor he brings not only his mega-wry sense of humor but also, somewhat against his will, his heart.

To be sure, Rakoff can issue a withering snark with the best of them. But once his rapier wit has sliced the buttons off its target's clothing, revealing the quivering, vulnerable mass within, his fundamental sense of decency gets the best of him and he can't resist reaching out and helping the poor unfortunate soul get back on its feet, straighten its duds and sally forth with a heartfelt "Don't worry, it's not you. It's me."

Nowhere is this clearer than in the collection's first piece, "In New England Everyone Calls You Dave" (illustrated with a woodcut of very alarmed-looking out-of-water fish). In it, Rakoff leaves his beloved New York for New Hampshire to climb Mount Monadnock on Christmas Day with a man who has climbed this smallish mountain every day for more than five years.

Rakoff, reared in Toronto but oh-so-New York (he traveled far and wide for many of these essays, but he's happiest when the assignment is complete and he's in a cab headed straight back to Manhattan), is a reluctant outdoorsman, to say the least. "As far as I'm concerned, the whole point of living in New York City is indoors," he writes. "You want greenery? Order the spinach."

He's also Jewish, and so is impervious to -- or, rather, slightly annoyed by -- the "Christmas-in-New-England-Warm-Hearthed-Cheery verisimilitude that Ralph Lauren would burn down a synagogue to achieve" that greets him at his bed-and-breakfast the night before the climb.

His antidote? Disappearing into his room to read a biography of Truman Capote, then later emerging to strike a pose in the "Bar of Golf Pillows" as a macho, hard-drinking, steak-eating Writer with a capital W -- an image he blows by A) asking if there's a synagogue or gay bar nearby and B) completely wigging out when the inn's friendly dog pukes up the popcorn he has been feeding it.

But Rakoff's biggest issues with the climb are footwear related. He detests the "large, ungainly potatolike" Timberland boots purchased for the climb "with a fervor I usually reserve for people. Just think, the shoes I wouldn't be caught dead in might actually turn out to be the shoes I am caught dead in."

But upon further inquiry, it turns out that the punch line is actually "It'll make your hole weak." Har-har-har.

"Good thing I didn't call forth a hearty 'I'll say it will!'" notes Rakoff.

But despite the homophobic (or at least anal-sex-phobic) humor, back on flat earth, Rakoff can't help forgiving the macho climber. "Looking across the table at him, I see nothing but a surpassingly decent guy," he says. "The mini test of my manhood notwithstanding, he was nothing but kind all day long."

In what becomes a recognizable pattern in "Fraud," Rakoff blames himself for any friction. "Everything about me, my inappropriate footwear, my effete lexicon, my unfamiliarity with such natural phenomena as trees, rock, and ice, have all been met with great equanimity and good grace," he concludes. "The only one casting strange glances of disapproval my way is me."

Self-hatred? Well, I suppose, but it's lighthearted self-hatred. Forgiving self-hatred, if such a thing is possible. And it's Rakoff's great joy in poking fun at his own quirks that makes this collection so delicious.

Rakoff milks considerable humor out of situations both strange and familiar -- and, in some cases, strangely familiar. Can I be the only former editorial assistant who cringes with recognition as Rakoff recalls boozy youthful nights spent at cheap watering holes with his fellow publishing nobodies with Algonquin Round Table pretensions? "With enough four-dollar drinks sloshing through our veins," he writes, "even the most dunderheaded, schoolyard japery qualified as coruscating repartee. 'What do you want? A medal or a chest to pin it on?' would elicit merry cries of 'Oh, touché!' as we clutched our martinis, throwing our heads back in mirthless, weary laughter."

And while few of us have probably ever spent a Christmas shopping season, as Rakoff did, posing as Sigmund Freud in Barney's department store window, surely we can appreciate why Rakoff began to pass the time by seeing patients, and found the whole experience "intoxicating."

It may be that no one gets a bigger kick out of Rakoff's wacky adventures than Rakoff himself. But the rest of us aren't too far behind.