The sizzling sleepers of summer

Forget "The Mummy Returns" and "Pearl Harbor": Here are the season's most scorching movies. 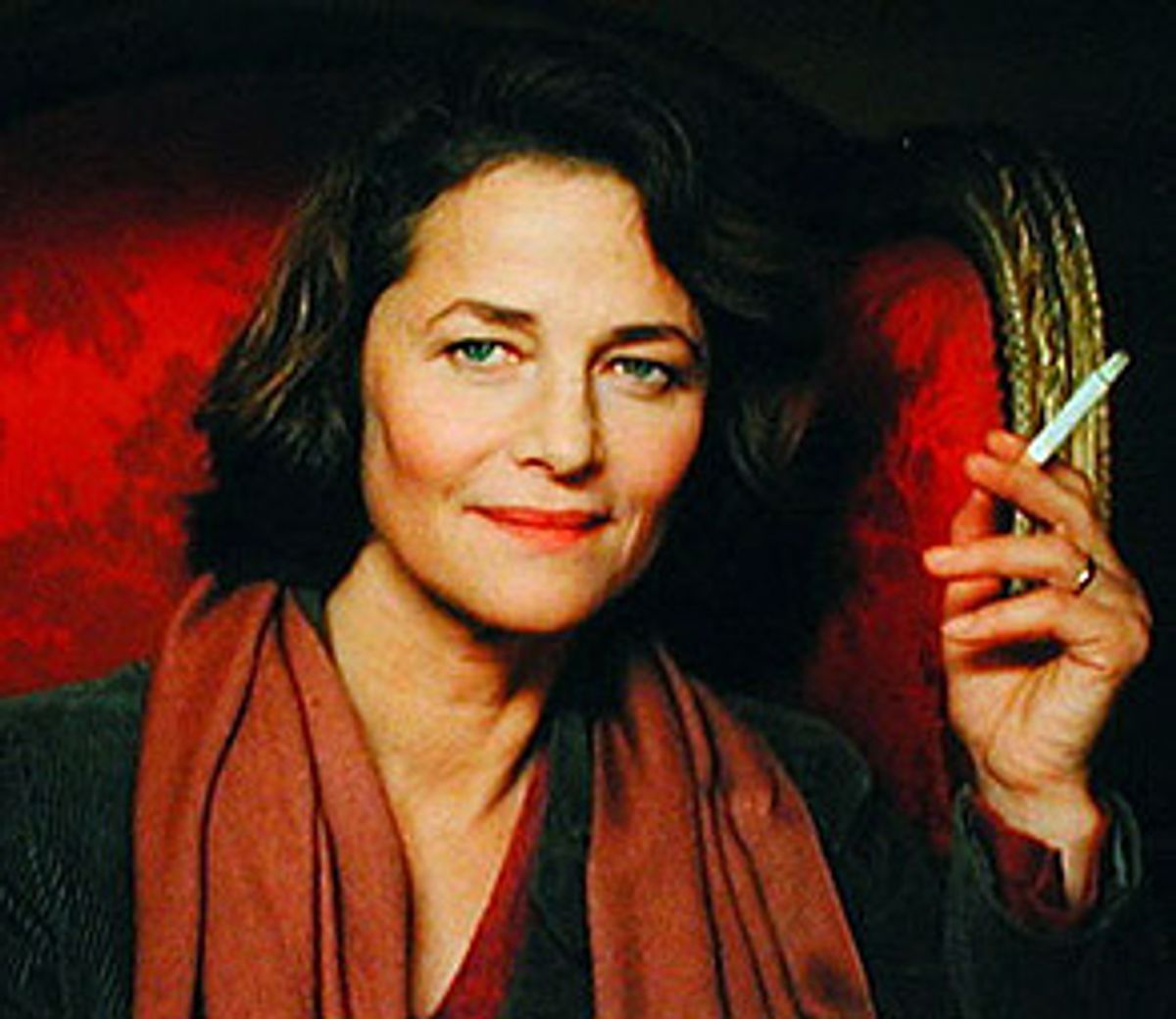 As the mainstream press promotes "The Mummy Returns," "Pearl Harbor" and the other vacuous, shrieking offspring from its news-tainment corporate parents, a more skeptical part of the audience has quietly been taking in more adventurous sorts of films. Below, Salon's critics take a look (in some cases a second look) at the season's most compelling, if less hyped, films: "The Circle," "With a Friend Like Harry," "Under the Sand," "Memento" and "Amores Perros."

The films of Quentin Tarantino are a blast and a goof -- they're caustic and mischievous, filled with in jokes, self-referentiality, a mordant wit and tour de force imaginations in scene setting. But as time goes on, his movies grow thin. His most memorable contentions -- gangsters are stupid, crime is absurd, even that Pam Grier has enormous dignity -- in the end are mere reminders of things we know already.

The Mexican film "Amores Perros," described on a page, sounds like a Tarantino movie. Three or four stories are intertwined by quirks of fate and coincidence but not temporal reality. A gang of thugs sets mastiffs on one another in underground dog fights. A young man tries to run off with his brother's provocative but noncommittal wife. A cop hires a hit man to kill his brother-in-law. A beautiful model, maimed in a car crash, is forced to look out a window at a giant wall poster of herself in her pre-accident glory.

But "Amores Perros," which was nominated for best foreign film at this year's Academy Awards (it lost to "Crouching Tiger, Hidden Dragon"), is really a meditation on some very un-Tarantino-like concepts. Alejandro González Iñárritu, directing Guillermo Arriaga's script, has other things in mind: His mélange of brotherhood, marriage, murder and dogs is designed to put into relief the experience of a certain perverse segment of humanity as it roils and churns under the pressure of civilization. He sees the breakdown of love and the allure of violence as dehumanizing, rather than the stuff of irony or cheap humor. It separates men and women from their true selves, reduces them to the level of animals.

Such moralizing -- though ultimately "Amores Perros" has no moral -- would seem trite were it not for the filmic ferocity with which González Iñárritu spits out his tale. The film has been routinely compared to "Traffic," but that is because the Mexico City milieu here is on the surface similar to the Tijuana the Benicio Del Toro character inhabits in that film. But those "Traffic" scenes were filmed in a washed-out, sere yellow: The world of "Amores Perros" is a supersaturated candy show of lights and hues, designed to contrast all the more starkly with the dark fruits of consequence: blood bubbling blackly out of bullet holes, bruises swelling and sex filling the screen with brown flesh.

The kinetic shocks of the story belie González Iñárritu's intents here. What turns out to be the second part of a glancing trilogy seems tonally at odds with the first. Halfway through you start feeling disappointed that the director has lost his way. But then you discover that his narrative arcs -- and his theme -- are much more grand, much more challenging, and the questions he's asking are bleak ones. Are we men, or animals? Angels, or torturers? Do we marry, or merely mate? Is a dog redeemable? Are humans? And the darkest scene Quentin Tarantino has yet filmed can't compare to González Iñárritu's frank admission that he can't answer any of those questions.

For any fan of '70s fringe cinema, the presence of the legendary Charlotte Rampling, once the star of the kinky softcore art film "The Night Porter" (not to mention Luchino Visconti's "The Damned" and the killer-whale classic "Orca"), will be more than enough reason to see "Under the Sand." But writer-director François Ozon has more to offer than Rampling, still smashing at 56, in an array of conservative but impeccably tailored Parisian fashions (and, yes, out of them too). This is an existential or perhaps mystical tale about a woman whose husband simply vanishes off the beach one summer day, told in muted, matter-of-fact terms that make it, in its gradual buildup of brooding power, seem more haunted rather than less.

As a meditation on loss, "Under the Sand" might well remind you of Krzysztof Kieslowski's "Blue," and as an exploration of a devastating disappearance it sometimes suggests George Sluizer's "The Vanishing." As a tale of strange events at a French summer house, it even has faint echoes of another 2001 art-house hit, "With a Friend Like Harry." But its unsettling realism, coupled with Rampling's performance as Marie, an English teacher in Paris who seems precariously balanced on the edge of sanity, gives it a humane bitterness that's all its own.

Ozon is a connoisseur of the silences and empty, apparently meaningless moments that make up most of our lives. With its absence of chatter and stylistic game playing, its contemplative focus on the human face and the unglamorous details of bourgeois existence, "Under the Sand" clearly belongs to what's been called the "New New Wave" of French cinema. But Ozon also reminds us how much this new tradition owes to older ones: He can make a scene in which a woman wants to remove a slipcover from a sofa, or a man discovers a nest of ants under a rotting log, seem redolent with meaning in the manner of Robert Bresson or Ingmar Bergman.

In "The Circle," Iranian director Jafar Panahi shows a level of empathy (if not of artfulness) for characters in the lowest rung of his society that has won him comparisons to the great neorealist films of Vittorio De Sica. That's the tradition many critics have cited not just for Panahi but for much contemporary Iranian cinema. In the case of "The Circle," I'd like to suggest a less obvious, and less reputable, comparison: the muckracking melodramas that Warner Bros. turned out in the 1930s.

The names of those movies told the story: "I Am a Fugitive From a Chain Gang," "20,000 Years in Sing Sing," "Each Dawn I Die." "The Circle" isn't that blunt. It's an elliptical movie, blending naturalism and stylization as it proceeds from one female character to the next. But in its quieter way, it's fueled by a similar sense of outrage -- in this case, outrage at the treatment of women in a fundamentalist theocracy.

The characters have all committed various transgressions: A woman is afraid to tell her pregnant daughter's in-laws that she has given birth to a girl instead of the expected male; a group of women recently released from prison act as if they are still prisoners as they dodge police roundups on the street; a mother tries to abandon the daughter she can't provide for; a prostitute is picked up by the police while johns are allowed to go free. Panahi's implicit message is that their greatest transgression is being female.

There's no violence at all in "The Circle" but something much more unsettling: the constant threat of it. Panahi never resolves the tension that hangs over the movie. That's the state, both literal and figurative, his women live in, and for the 90 minutes of "The Circle," so do we.

If David Lynch had a French half-brother he might have made "With a Friend Like Harry." It's a strangely colored macabre thriller, directed by Dominik Moll and written by Gilles Marchand and Moll. The story is about a well-to-do guy, Harry (Sergi Lopez), who insinuates himself and his girlfriend, Plum (Sophie Guillemin), into the lives of a middle-class family -- Michel, his wife, Claire, and their three little daughters -- after the two men meet in a roadside men's room. Harry's apparent motive is to help his old pal Michel, with whom he claims to have gone to high school. (Michel never really remembers Harry.)

Harry begins trying to solve Michel's problems. The family's car breaks down, so Harry buys them a new SUV. He offers to drive Claire home from grocery shopping in his Mercedes. He urges Michel to write again, as he did in high school.

And then things get weird. The plot twists that follow are Hitchcockian, but these are less intrinsic to the movie's intents than the bizarre moments and intermittent disturbing humor. Harry tells Michel that he must eat an egg yolk after each orgasm; he himself does so in the summer house's kitchen at odd hours of the night. There is another bathroom, this one shocking pink, that becomes central to the story. A surreal poem about monkeys makes one suspect that the French really are different from everyone else.

I think they are, and this film is like a minivacation to France -- one in which you can hang with strange people for a couple of hours, laugh at and with them and be glad that you don't have a friend like Harry. Morals of the movie: SUVs can make your life easier, especially if they have air conditioning. And: If you meet someone in a rest stop men's room, don't let him come to your house.

Christopher Nolan's movie swings on a gimmick, sure, but it's a good one. If you don't like gimmicks, there's not a lot left, other than some confusing, po-mo theory about the nature of memory and its relationship to reality.

Guy Pearce, who played second fiddle to Russell Crowe in "L.A. Confidential," plays Leonard, a former insurance investigator who lost his short-term memory in an assault that happened at the same time his wife was raped and murdered. He wants to avenge his wife, but having to essentially start over every 15 minutes is a difficult handicap.

In order to navigate his world of seedy bars, chain motels and bland commercial roads, to build a case against the killer, he annotates Polaroids and uses extensive note taking and, in extreme circumstances, tattoos to remind him of the most important truths. Along the way, he's either helped or hindered by Carrie-Anne Moss, playing femme fatale Natalie, and Joe Pantoliano as the chummy Teddy.

The critics were mixed about the film, but audiences have been a little more responsive, intrigued by the word of mouth -- it's one of those movies that you have to talk about as soon as the credits roll. After 11 weeks, it has grossed nearly $15 million, and is just now hitting the Top 10 in box-office receipts.

You can be charitable and note that "Memento" never takes its audience's intelligence for granted. It expects you to figure it out and fill in its holes. The less charitable view is that its backward storytelling is just confusing and the device masks at least one big hole and a fall-from-the-sky revelation that comes toward the end of the picture.

At least, that's the way I remember it.