The fourth season of HBO's "Sex and the City" is just as funny as the last, but now the girls are questioning who they are as much as who they are sleeping with. 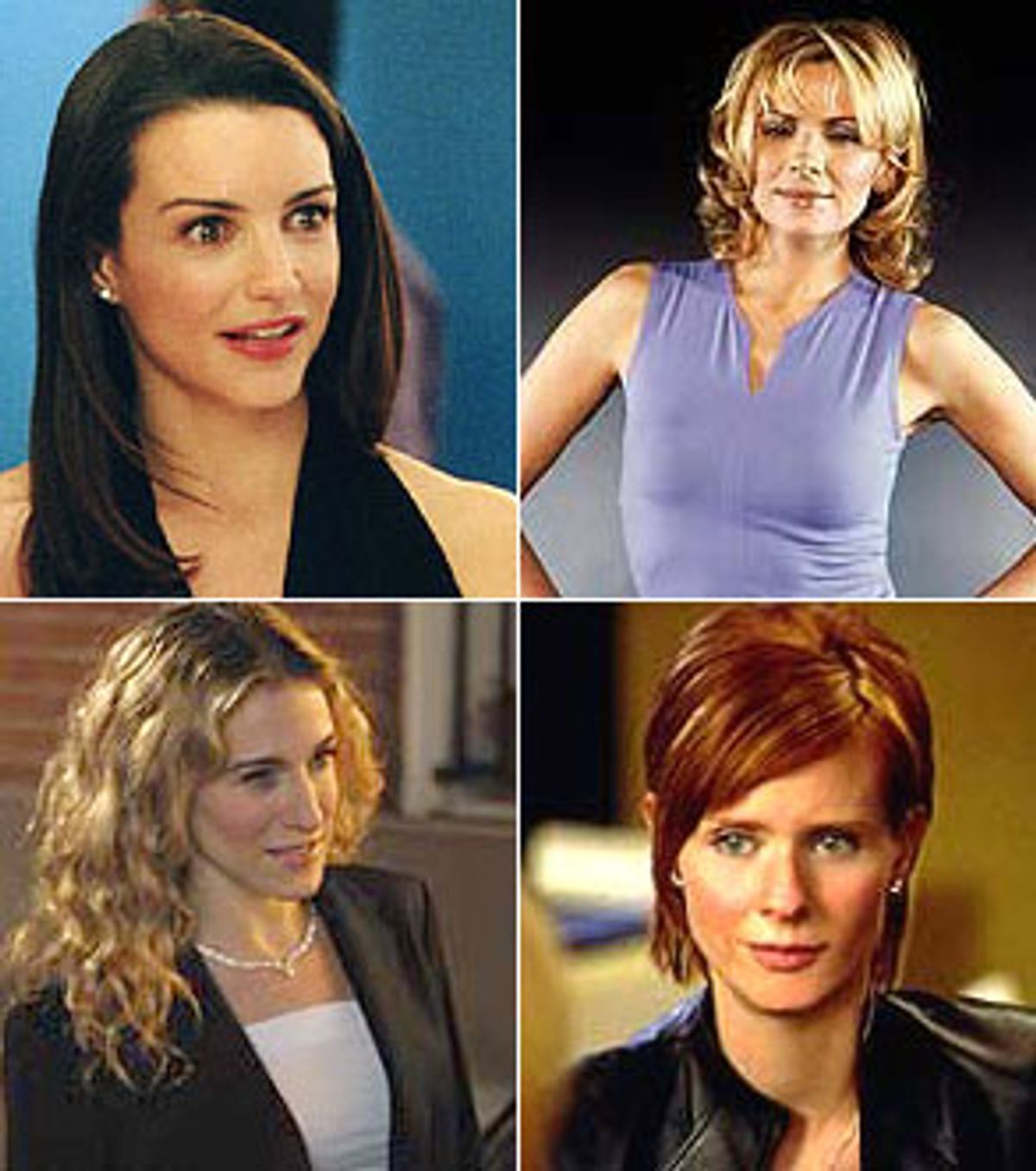 HBO's "Sex and the City" is a shallow show that goes deep. And if the double-episode, fourth-season premiere Sunday night is any indication, this summer the show will be going as deep as Samantha's men do in bed.

This season it seems the writers have decided to deal with the prerequisites of great sex: finding soul mates and finding yourself. In fact, the only people who have sex in the first two shows are Trey (on Charlotte's leg) and Samantha (Kim Cattrall, with herself).

The themes are, as usual, played out by Carrie Bradshaw (Sarah Jessica Parker), the leader of the pack. She's a sex columnist who worries as much about her hair as she does about why we live. In the final episode of last season, she reached closure with her nemesis, the rich player Mr. Big (Chris Noth). After three seasons of torture -- breaking up and falling into lust over and over with a man who won't/can't commit -- Carrie tells him (and means it) that they should just be friends.

In this season's first episode, she turns 35 and does what most girls do: tells her friends that she wants to keep it low-key, hoping they'll give her a party anyway. After attending an engagement party for a couple who patronizes them for being single, Carrie and Miranda (Cynthia Nixon) bring up the show's theme to the other girls: Is there such a thing as a soul mate?

Carrie thinks there might be more than one, Samantha says she's had hundreds and Miranda (always the lawyer) thinks the quest itself sets you up for a fall. Charlotte (Kristin Davis), the sweet and square one of the bunch, is currently separated from her husband, Trey. His various sexual problems include impotence and, most recently, a bout of premature ejaculation at an awkward time. (Always the gentleman, he offered to pay her dry-cleaning bill.) Charlotte is accordingly unsure about the concept of a soul mate. "I thought Trey was mine," she says, "but I don't think a soul mate would ... um ... on your leg."

Samantha, always the most sexually adventurous of the bunch, falls for a hot-looking priest and gives us over-the-top hilarious moments as she tries to pick him up in church. "He's so Robin and his merry men" in that robe, she tells Carrie, referring to him as "Friar Fuck." When she strikes out with the holy man, she uses him as fantasy material for a two-and-a-half-hour self-pleasure marathon.

Carrie, meanwhile, has told her friends not to invite Big to her birthday dinner, but breaks down the night before and invites him anyway. When her friends all miss the party because of a variety of traffic and communication problems, she goes home to take a shower and wash all of them out of her hair. Instead, they come to take her to the coffee shop, where the show's theme is delineated in true "SATC" fashion.

The show's strength lies in how it gets you laughing with and at the characters and then zings you with a line that is so simple and true it can make you cry. After Carrie says, "I know I have you guys. I hate myself a little for saying this, but it felt really sad not to have a man in my life who cares about me," sweet Charlotte cuts through it all: "Maybe we could be each other's soul mates. And men could be these great nice guys to have fun with."

And just like that, with a childlike clarity that cuts through the weary cynicism, Charlotte brings back the love. The denouement comes when Carrie goes home to find Big parked in front of her apartment in his limo. He offers her a bunch of red balloons and a bottle of champagne. When Carrie asks him if he believes in soul mates, Big says, "I like the word 'soul.' I like the word 'mate.' Other than that, you got me." At that, Carrie smiles and lets the balloons go.

The second episode's theme is "find yourself" and it refers to finding not only the courage to pick yourself up when you fall but the guts to look at your own vagina.

Carrie the writer is chosen by a fashion show producer (a miscast Margaret Cho) to be a "nonmodel" in a runway extravaganza for pros and amateurs. She balks, thinking that a writer shouldn't strut her stuff, but when she sniffs a chance at free Dolce & Gabbana garb it's all systems go.

Meanwhile, the other girls are facing identity issues of their own. Charlotte the prude is wondering what to do with her estranged hubby, who seems to want her only when she's unavailable. Her gynecologist says her vagina is "depressed" and Sam tells her to take a good look at it sometime, which makes her shudder with repulsion. ("I think it's ugly," says Charlotte. "That's why it's depressed," counters Miranda.)

Miranda the brain gets picked up at the gym by a hunky dude who throws her for a loop by telling her she's sexy. ("Sexy is the thing I get men to notice after I win them over with my intelligence," she says.) Then she gets him on her sofa and is sexually aggressive with him, only to be turned down.

Samantha the sex machine decides she wants to keep her body hot forever, so she starts on a diet of hot water and lemon and has nude photos taken that she can show her grandchildren someday. When the photographer and framer fail to ogle her 40-ish form, she faces her own fragile ego.

One of the show's underlying themes, carried over from last season to this one, are the lessons the gay community has given straight people about creating one's own family. We see Carrie literally fall on her face as she tries to do her catwalk number; but when she gets up and goes on, her action gives courage to her girlfriends/soul mates.

Charlotte finds the nerve to tell Trey to stay away until she figures out what she wants, and then we see her holding a mirror up to her most private self. Miranda approaches the gym bum who didn't call her and asks why. (He says she seemed full of herself -- and we see her realize that was because she was not being herself.) And Samantha decides to forget the crazy lemon-and-water diet and orders in Chinese.

The episode's theme song is the great disco anthem "Got to Be Real" by Cheryl Lynn, the perfect backdrop to the show's climax. "When people fall down in life," says Carrie in voice-over, "they get right back up and keep on walking."

Sure, "Sex and the City" is a chick show. Sure, it's shallow. But somehow it helps a lot of would-be urban cynics to keep on walking and keep on smiling.