Esquire's guide to what a man should know about sex is fun and female-friendly, but it's also about helping guys get laid. 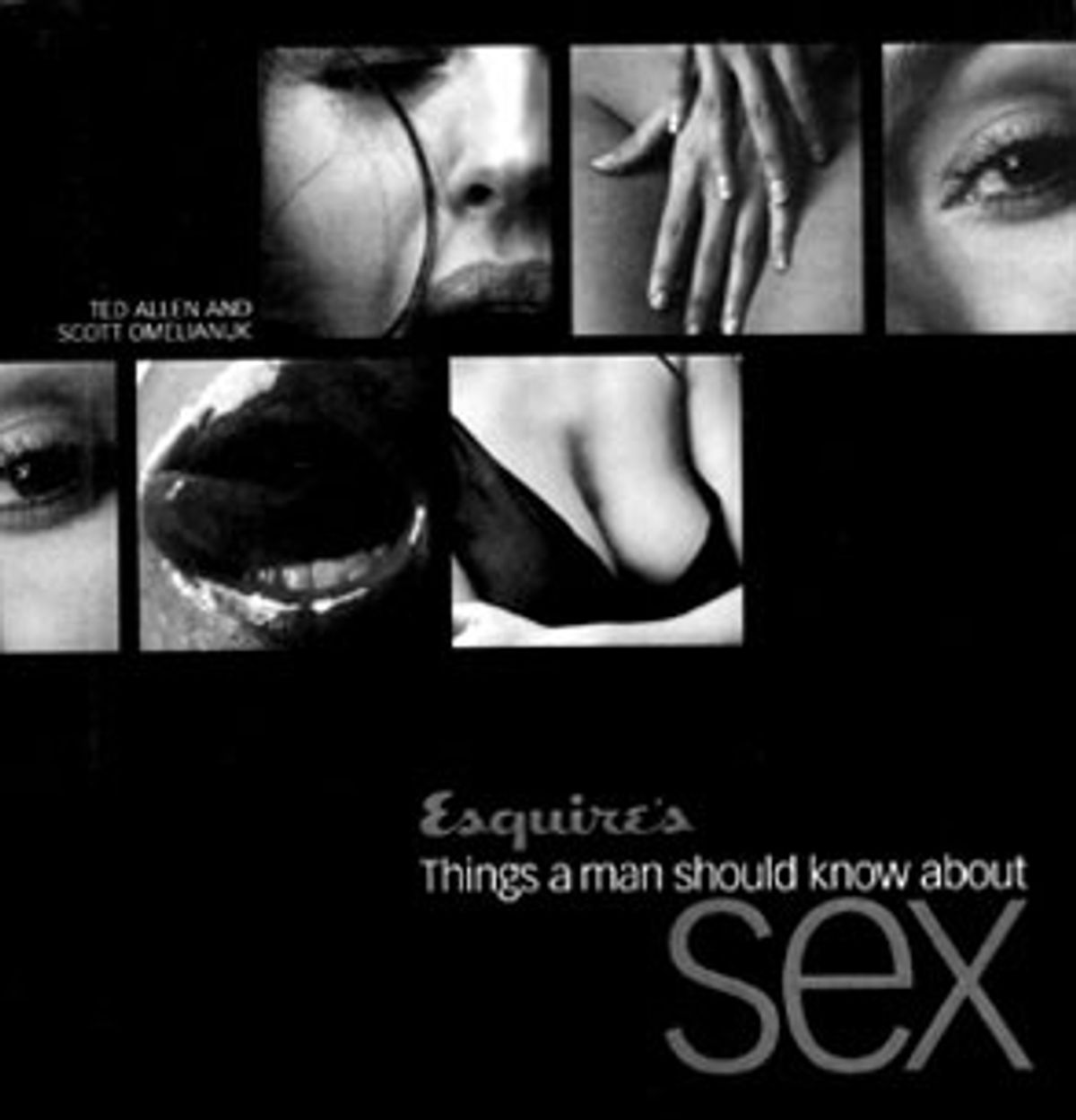 Scott Omelianuk and Ted Allen are Esquire magazine editors who have written a book called "Things a Man Should Know About Sex." It's not really a book. It's more a collection of one-liners and witty admonitions constituting an amorphous philosophy of life that owes something to the style and attitude of Hugh Hefner and the "Rules" gals, with a dollop of Dennis Miller.

The book doesn't pretend to be literature. It is just humorous, glib sex advice. Some of it is classic stuff, heightened by timely political humor: "What appeals to no woman: premature, shall we say, resolution. Yours. Extra Bonus Mental Picture that might assist in the avoidance of premature resolution: Dick Cheney. Also: Dick Cheney in Jackboots and pasties and nothing else."

There are lines that suggest the authors know many readers will be desperate: "And remember: Willing is better than beautiful."

Some items wink with pop-cultural savvy: "Fewer than five percent of married people cheat on their spouses each year. Sixty-seven percent of that five percent is Mick Jagger."

Sometimes the authors even approach wisdom: "Sometimes a woman will indicate she'd like to have sex (with you) and will disrobe and climb into bed and only then change her mind. What you do when this happens: Accept it graciously."

There is smart advice for men too inexperienced to know: "Men should participate in all birth control decisions."

But most of the advice is just fun, and will probably be more interesting to women, who are trying to find out how men think, than to men, who probably won't listen anyway.

As for the eminence of Esquire editors as the definers of Man at His Best, those days, alas, are gone. The days of Esquire's timeless writing, of its being above the fray and sophisticatedly risqu&eacute, are long gone. The new Esquire is less French cuffs than Dockers. It is not about how to open a bottle of champagne but about how to make a fish taco. Those of us who cherish the nuances of romantic formality have shed some tears over this change. Where are the men who know what Irwin Shaw says about girls in their summer dresses? Where are the men who know how to shake a perfect martini and who can order for a woman in a restaurant in a way that makes her feel special but not controlled?

Sigh. It's not young Omelianuk's fault. At least he knew that the authors needed to talk to women for a book like this. And it shows. The first lines of the book are: "It's about her. Except when it's about her."

Why did you write this book?

Well, one of the reasons we did the book was I don't know any men who don't think they know everything about sex. It's for every guy in the world. I also believe that as many women will buy it as men.

What is the demographic you were writing for?

Our readers are in their mid-30s -- someone who has had sex before.

Was the book staff written or just by you and Ted Allen?

It wasn't staff. My coauthor, Ted Allen, is a contributing editor in Chicago. We asked women via e-mail or after buying them a couple of drinks. A lot of it was paying attention yourself to what people were telling you throughout your life. There's a spot in the introduction where we say, "We also have consulted important studies of human sexual behavior, from the classics (Hite, Kinsey, Erica Jong, Snoop Dogg) to the groundbreaking University of Chicago report of 1996, except where we made things up completely." That's kind of how it was.

That is from various studies, yes.

It seems you really did talk to women, since you have some things in the book that only they know about.

Well, where you say women want you to kiss them, really kiss them, more than you do, and that it's good to start at the neck. And how it's good to tell her that her body is beautiful, no matter what it's like. Also, it's good to bring her flowers now and then. One flower is fine. Why don't men just know this?

Well, we do say that what works with some women doesn't with others. When I did the style book [there are also Esquire books on what men should know about style and marriage], there was a line in it about not wearing a mustache. I was at a book reading in Chicago and there was a guy there with a mustache who challenged me. I told him, "Hey, you look good, but not every guy does." There are no rules for everyone.

So why do you think men think they know everything?

Well, this one does. [Laughs] As evolved as men would like to think they are, we are just fundamentally different from women.

But why do men give women flowers in the beginning of a relationship and then stop?

I, um. Um, I guess I'm being a guy here. I guess the reason we pay attention to them for a while is because we want to care, we want to be good, we want to please. But it's not necessarily natural for us to do particular things. The impulse to give flowers might not be natural, and because it's not natural -- it's like dieting or exercising -- you stop doing it. And this thing exists that we men are bad people because we don't do these things. And, besides, there are things men want that aren't natural for women.

Well, for example, a lot of men would be pleased if women were a little more aggressive in initiating sex. I know guys who are freaked out if a woman is too aggressive, but if she is just a bit more ...

Have you gotten comments from women about the book?

The whole tone of the book is female-friendly. If I were to write a book for women, it would take the same tack. I gave part of the book to Diane Farr, a woman who has been on MTV's "Love Line" and who wrote for me, and she thought it was great.

But I must say that I'm also one who thinks there are some basic biological differences that need to be considered.

And women like to have men do things for them that used to be considered not politically correct.

Yes. We have another book coming out in November that will be an etiquette book. It will say, "Open the door for a woman." If she doesn't like it, that's sad. And he should stand up at the table when a woman leaves. It's not a gender difference so much as a gesture of civility that we don't have enough of.

Where did you learn all this? Did you grow up with a good mother?

Hey, I'm hoping to find a sugar mommy one day. But seriously, I was in large part raised by my mother alone and surrounded by a lot of strong women growing up.

I think the hygiene tips are key. I love this one: "We know that you give some of your best performances before breakfast, but let's everybody brush our teeth first." Why do you think most guys need to be told that?

Because we're guys. We wouldn't change our underwear if we didn't have to. We have other things to offer rather than good manners sometimes. Let's say you are in bed with this beautiful woman -- you've just woken up and all you can think of is some physical pleasantness and you're swept away? It's not time to brush your teeth. But we do need training.

So where is the romance in this book? Did you leave out the love because men separate love and sex?

That's a really difficult question -- separating love and sex. It causes problems. One could argue that we are perceived to be at fault in that equation as opposed to just coming from a completely different place. I don't know that it's entirely fair to say that men are pigs if they can have sex without love. It's important for each person to keep in mind how they are affecting the other, but beyond that, I don't know if it's right that we are bad guys. Our impulse to want sex without love isn't necessarily any worse than wanting there to be love.

This book does seem female-friendly, with items like "She can say no to sexual relations. You cannot." But the subtext also seems to be: Guys really just want a lot of sex and here's how to get it, even if it means being thoughtful!

Yes, the book is about being female-friendly, and if the subtext is that by doing so you'll get more sex, that's fine. It's nice to have a lot of sex (not that I necessarily know).

So, what's the truth about all men wanting two women at the same time? What is that about?

I can't explain it. I told a friend recently that if any man says they aren't into it, they are lying. And all men love to see two women together, but they also see themselves being invited to join in.

So you don't know any guys who admit they need advice about sex?

No man says he needs it. We all have a false sense of confidence. We are all our own little Warren Beattys.