Treasury Secretary Paul O'Neill promised to dump his Alcoa stock in March. He still hasn't -- and might have bagged $62 million as a result. 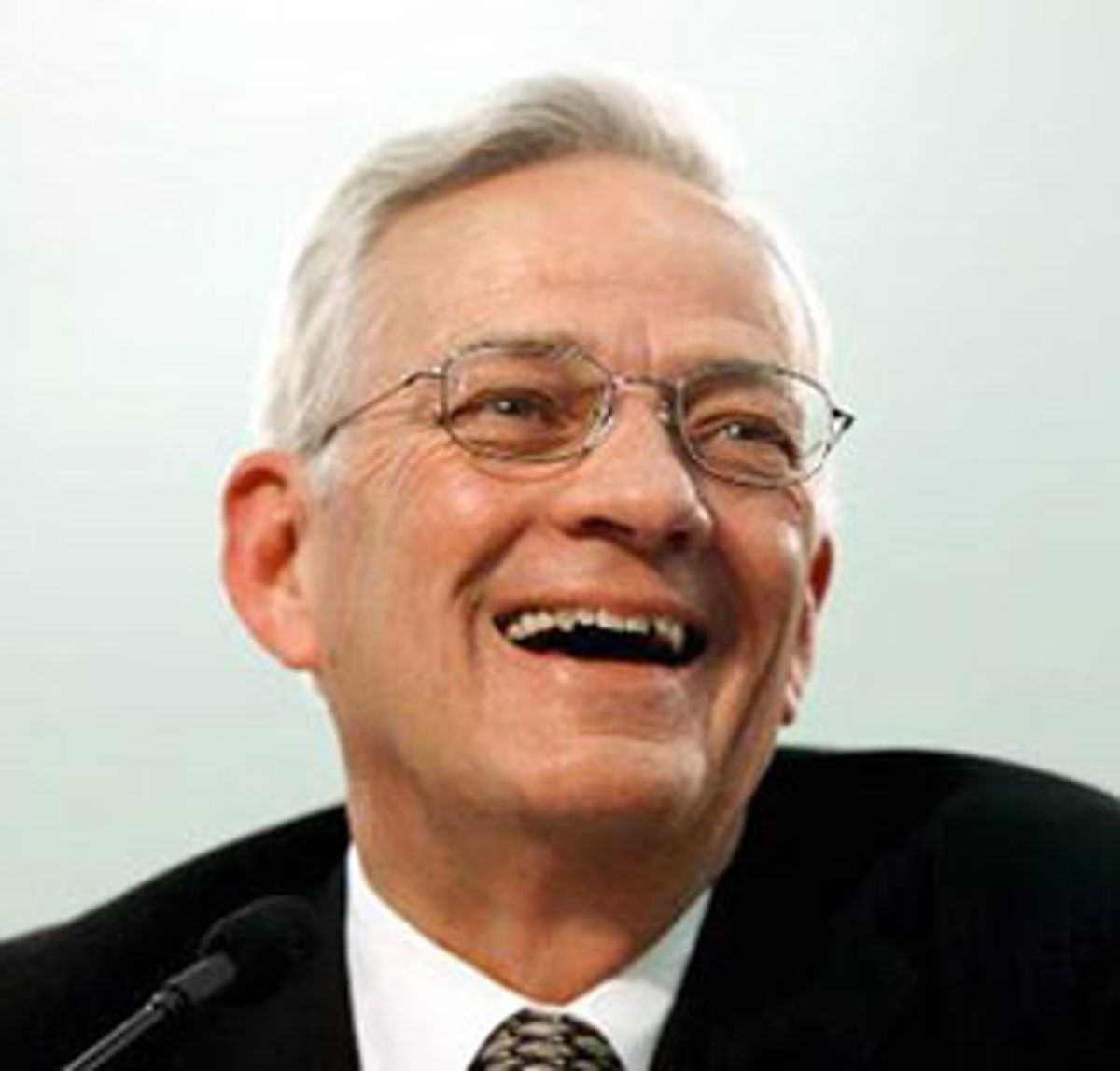 More than two months ago, Treasury Secretary Paul O'Neill agreed to sell $100 million in stock in Alcoa, the aluminum company he used to run, announcing on ABC's "This Week" that he had told his staff, "Let's get this off the table" in order to avoid any appearance of a conflict of interest.

For now, though, O'Neill's stocks are still very much on the table. He has not fully divested and refuses to say just how much stock he has left in his former company. But he almost surely has earned millions off the stock as its price has soared in recent months -- in part because of initiatives by the federal government.

By delaying his sale of the stock, O'Neill could have reaped a $62 million windfall.

By Thursday, Alcoa's stock had increased in value about 30 percent since O'Neill made that March 25 announcement, promising to divest from the company he ran for 13 years. Michele Davis, a Treasury spokeswoman, said that O'Neill had sold some of his stock, but would not say how much, refusing to characterize his transaction as either large or small, saying only that "it will all be gone by June 22. His financial advisors are selling pieces of it on a routine basis."

Davis claims that O'Neill's sale of Alcoa stock has been underway since "maybe April." But as of Thursday, the Securities and Exchange Commission had no record showing that O'Neill had sold any shares of Alcoa. And according to Peter Romeo, a Washington securities lawyer, the SEC would "almost certainly" have to be notified had any large transaction by a former chairman gone through. Davis did not return a call for further comment.

Considering the meteoric rise of Alcoa stock since O'Neill's March 25 pledge, such a delay makes financial, if not ethical, sense.

After all, O'Neill left Alcoa with 2.37 million shares of stock and 3.77 million in stock options. Had he held on to all of his stocks as Alcoa's stock price has shot to the roof in the last few months, he would now be significantly richer -- $62 million richer.

"One of the sad truths of Washington is you can't take people at their word anymore on anything," says Charles Lewis, executive director of the Center for Public Integrity, a government watchdog group. "When we hear people are selling their stocks, silly us -- we actually thought he was selling it. The idea that he has gotten wealthier by not doing what he promised the American people he would do weeks ago is lamentable and misleading to the public."

Lewis also says he was troubled by the fact that O'Neill has "made money by holding on to [the stock] while at the same time administration policies on energy have driven up the price of his stock."

When President Bush was sworn in Jan. 21, Alcoa stock was worth $32.69 per share. On March 26, the day after O'Neill said he would sell his shares in Alcoa, the company's stock opened at $33.90. Since then, due in part to actions by the federal government in response to the energy crisis, Alcoa stock has risen dramatically.

On Wednesday, Alcoa closed at $43.99 on the New York Stock Exchange -- a $10.09, or 29.8 percent, increase since O'Neill promised to sell the stock. In other words, O'Neill's net worth because of Alcoa has increased $23.9 million if he has held on to his entire investment.

Moreover, O'Neill also held 3.77 million Alcoa stock options. Alcoa's annual report says the 44.6 million options given to employees have an average exercisable price of $23.42. Assuming this to be the worth of each one of O'Neill's stock options -- a conservative estimate -- the increase in value of these options from March 26 until June 6 would be approximately $38.1 million. That means, in total, O'Neill's foot-dragging on the matter could have made him $62 million richer.

And O'Neill has certainly been in no hurry on the matter. It wasn't until April 23 that the U.S. Office of Government Ethics received his request for the certificate of divestiture form he would need to defer payment of the capital gains tax he would owe after selling his Alcoa shares.

By that day, the stock price was already beginning to jump, closing at $40.42. The day that the ethics office issued his certificate of divestiture, on April 26, Alcoa closed at $42.08.

A few weeks before, on April 10, officials at a federal government hydroelectric power company wholesaler in the Pacific Northwest, Bonneville Power Administration, run by the U.S. Department of Energy, asked aluminum producers in Washington, Oregon and Idaho to halt their production of aluminum for up to two years in order to conserve energy, reducing the worldwide supply of aluminum by 5 percent.

The federal agency also requested that aluminum companies not restart 10 manufacturing smelters in Washington, Oregon and Montana for more than two years, thus putting a temporary halt to 40 percent of the nation's aluminum-making capacity.

When Alcoa announced its intention to temporarily close its Washington state smelter on May 16, as requested by the federal government, it again ensured a reduction in the supply of aluminum, and its stock rose $1.51 per share, to $44.51, the highest value of the stock at that point since President Bush took office. Depending on how many stocks and options the Treasury secretary has sold -- a number he refuses to disclose -- that day's events could have increased the worth of his portfolio by $3.6 million in stocks and $5.7 million in stock options.

George Lequime, a senior money analyst and expert on Alcoa at HSBC in New York, says that Alcoa's stock is rising not only because Alcoa is a well-run company in a cyclical market, but directly because of the "power theme in the Pacific Northwest and the idea that aluminum capacity has been taken off-line. There are certainly some big bets out there that if the economy recovers there won't be enough aluminum to meet demand.

"I'm not sure how long the cycle's going to last," Lequime says. "They're not too sure how many more curtailments the industry's going to get as a result of power-related problems. There's a chance that aluminum prices could run. It's very difficult to get people to sell it now."

That the Department of Energy has apparently affected Alcoa's stock price raises a number of questions for watchdog Lewis. "What was O'Neill's personal involvement and personal knowledge in the administration's energy policies?" he asks. "To what extent was he in meetings? What extent was he in the loop as policy was being formulated? What contact has he had with the Alcoa company?"

"He's been dragged kicking and screaming into doing the right thing here," Lewis says. "He didn't want to do the right thing and he's still not doing it. Any way you look at it, O'Neill has not handled this matter well, to put it charitably."

Early in this administration, O'Neill proved a lightning rod for Bush critics. Just last month, an interview he gave to the Financial Times created headlines after he called for the elimination of all taxes on corporations (suggesting they be replaced by increased taxes on individuals), and by announcing that he hopes to eliminate the subsidizing of Social Security and Medicare.

And at the beginning of his tenure as Treasury secretary, O'Neill announced that he had no plans to divest his Alcoa holdings. "The ethics department lawyers said they thought it was OK for me to maintain these shares," O'Neill said on NBC's "Meet the Press" in early March. "You know, I can't imagine that, as Treasury secretary, I'm going to have decisions come before me that have anything to do with this." If there were such situations, he would recuse himself, O'Neill said.

His position stood in contrast to that of other Bush officials, such as Federal Budget Director Mitchell Daniels and Commerce Secretary Donald Evans, who divested themselves of their multimillion-dollar stakes in the companies they once led early on in their new jobs. And just this week, in the face of criticism, Bush senior advisor Karl Rove unloaded between $100,000 and $250,000 worth of shares in Boeing, General Electric and Enron, companies that all stand to do fairly well with the administration's energy and defense policies. On June 4, Bloomberg News reported that Rove had yet to seek his certificate of divestiture from the Office of Government Ethics; one day later he put his request in.

But O'Neill held firm, marking a stark contrast with his predecessor, former Clinton official Robert Rubin. When Rubin was appointed to head the National Economic Council in 1992, the former chairman of Goldman, Sachs and Co. placed his $100 million in company interests into a bond held in a blind trust, which he personally insured at a cost of $291,000 a year.

The New York Times editorial board, among others, slammed O'Neill. "(T)here are broad policy issues from which he cannot disengage that could affect the aluminum industry and thus Alcoa -- tax and trade issues, for example, or currency policy, where the strength or weakness of the dollar could affect Alcoa's sales abroad," the newspaper opined on March 8. "Even if Mr. O'Neill does not let his ties to Alcoa influence his thinking, some people will suspect that he did. So why run that risk? Mr. O'Neill should sell the stock, as well as the options."

Good-government groups echoed the sentiment, and Democrats gleefully took advantage of the situation. On March 21, Democratic National Committee chairman Terry McAuliffe announced that the DNC would provide an Alcoa stock ticker on its Web site to allow surfers to see "how much money the Treasury secretary is making off of his ... unusual stock arrangement."

Finally, on March 25, O'Neill yielded on the matter, telling ABC News' Sam Donaldson that he would "put the Alcoa proceeds -- or stock value into -- into index funds that are not subject to any question. Because the president has drawn me into so many issues involving, not just the Treasury portfolio that I have, but almost every other issue that the government is involved in. And so I'm just going to take this issue off the table and get on with my business."

Asked when he would sell his stock, O'Neill said, "The financial people that take care of these kind of things will pace it and figure how to do it.

"I want to spend all of my time working on issues that the president wants me to be involved in," O'Neill said. "And I don't want lawyers having to be looking at, 'Is it OK to be involved in this issue or that issue?' I didn't realize we were going to have this kind of ongoing question."

Ongoing question or not, there is at least one lesson to be learned from Paul O'Neill: Patience pays off.