Sexy young Allen Iverson was the one everyone watched in Wednesday night's upset of the Lakers. 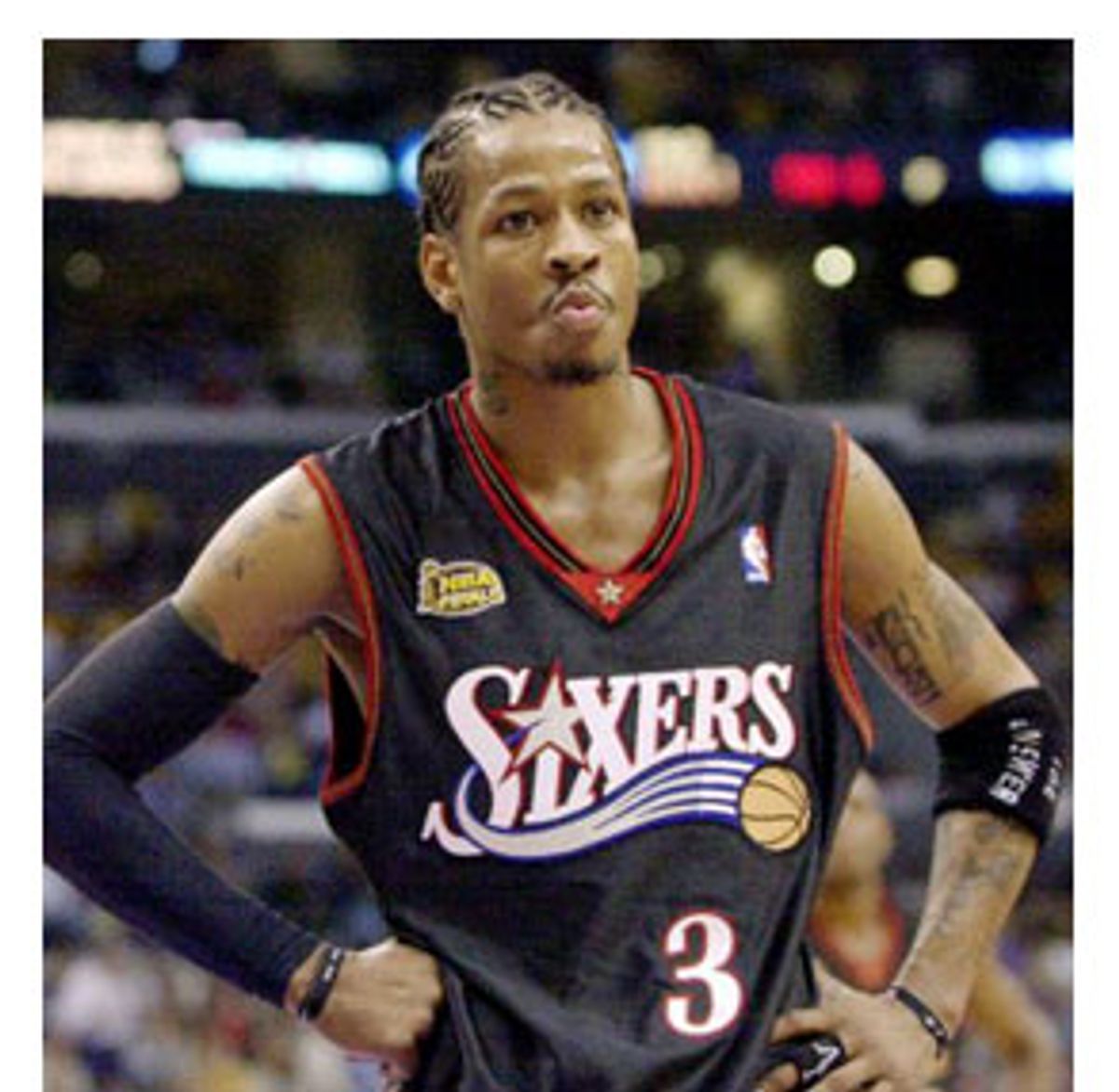 Coming out of the movie at 9:15 p.m. in San Francisco and looking for a bar or a restaurant with a TV set to establish how big a win the Lakers had had in Game 1 of the NBA Finals, you could feel that something had happened. The post-game interviews were all with men in black. Before you could hear what they were saying -- the stalwart words on a block well done, the grinding insolence about how he'd penetrated, penetrated, did I say penetrated? -- you could see the two faces of Dikembe Mutombo and the sexiest person of the week (yes, take a rest, Tom Daschle), Allen Iverson.

And there he was, with his street-killer growl, saying he didn't necessarily see that a sweep was out of the question.

The 76ers were tired and emotionally drained by the Milwaukee series (only the second that they nearly threw away). They were knocked up. The Lakers were rested, cool and healed, and they were Shaquille O'Neal and Kobe Bryant on their own court, just itching to fulfill the notion of not losing another game this season. Those Lakers could still come back and win, of course. They're probably still favored by the bookmakers. After all, you can tell yourself that they took it for granted, that they went from cool to cold even, and that all they need now is to notch it up a couple of levels.

Sure, that's what Phil Jackson is explaining to them. But now the Lakers know it can't be serene and excellent and streamlined and absolutely L.A. The only way they're going to win is by killing Iverson. They're going to have to have a crime on their young souls. And suddenly, that little scrap of a thing looks as if he's had more practice at that than they ever dreamed of.

He didn't just put it to them for 48 points. (Actually, his shooting percentage was down.) What he did that the Lakers can't forget is that he went into the Staples Center and let it be known that he was the star, the guy you couldn't take your eyes off, the sexpot.

He just set up the theater of marveling that anyone had ever believed that guys in yellow and purple could beat guys in black and red. And he kept falling over, like a kid in a cowboys and Indians game, a kid who's so thrilled by all the ways of dying that he could go on for hours, flopping, diving, staggering, startling, flying. How can you ever call steps on someone never still? Did I say penetrating? When he is nothing but a slip of a thing, a girl, with tattoos looping around her body like barbed wire and cornrows that could cut your hands to pieces.

Iverson isn't just a great player, he's a dominator and an imposer, and he has made Shaq look stiff and Kobe quiet. On their own floor. And they know now, beyond all illusions, that he is nasty as well as great and only mayhem can stop him. He is so hungry he might start to eat on Shaq's fat thighs, and grin at him, while the blood runs down his face.

It was just a few weeks ago, watching Iverson and listening to him -- he has the voice of someone whose throat has been cut a few times -- that I thought how he was born to play Miles Davis, the Miles who could be so sweet you couldn't credit how nasty he was. And how he honestly hated you.

Of course, the 76ers still could lose. And everyone's more or less on the money when they say that Allen Iverson is inconsistent still, and rarely able to play four quarters at full volume. That's entirely correct, and God help the Lakers if he ever steadies up. Why, I'd say that if he can do that once in the next couple of games -- if he can get 55 points -- they're gone. Because the one thing this year the Lakers have missed in their great inner therapy is how to be nasty and sexy, and how to treat basketball like chess with razors.