Can the president convince our increasingly dismayed allies that he isn't just an arrogant Texas oilman? 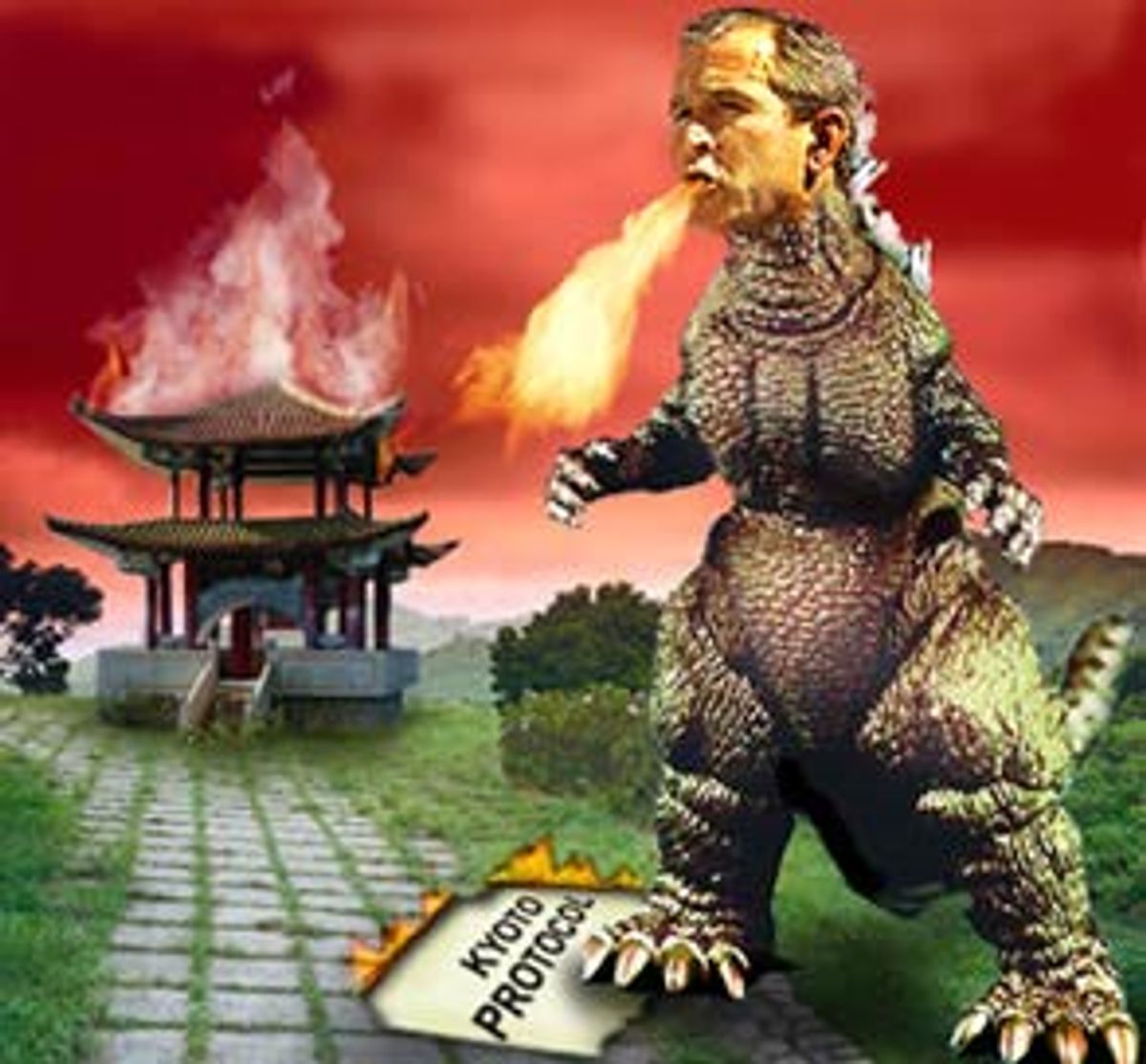 If President Bush thought California was hostile territory, he probably won't like Europe much. The president makes his first trip to the continent this week amid increasing criticism from European leaders and a growing perception among Europeans that Bush is "a shallow, arrogant, gun-loving, abortion-hating, Christian fundamentalist Texan buffoon," as one administration official described it to the New York Times.

On the eve of his trip, Bush was trying to make the best of an impossible political predicament. His energy plan, released last month, calls for increased mining, drilling and power plant construction, and officially shelves a campaign pledge to reduce carbon dioxide emissions from power plants. But one of the top issues on the European agenda is global warming, particularly Bush's decision to back out of the 1997 global warming pact known as the Kyoto Protocol. And with last week's National Academy of Sciences study, commissioned by the administration, confirming what everyone but the White House seemed to already know -- that global warming is in fact real -- Bush is left spinning madly, trying to reconcile his energy plan with the need to at least appear concerned about climate change as he makes his first European visit.

Internationally, environmentalists say any serious administration commitment to stopping global warming would involve revamping the entire Bush energy policy. "The (Bush) energy policy is the global warming policy," said Dan Becker, director of the Sierra Club's Global Warming and Energy Program. "Their policy is burning more coal and pillaging the Arctic to burn more oil. They have chatted to us about something on renewables but they've made no commitments."

Environmental groups had estimated that if the entire Bush energy plan was implemented, it would increase the pollution that causes global warming by 35 percent over the next 10 years.

But anyone expecting that the results of the NAS study, or criticism by European leaders, would lead to a thoroughgoing reevaluation of the Bush energy plan will be sorely disappointed. While some in the administration made noise over the weekend to suggest the study might force at least a modest tweaking of the administration's energy strategy, Bush's statements on Monday, as he prepared to leave the country, showed him standing firm.

Bush tried to sound a conciliatory note as he assured our European allies that "the earth's well-being is also an issue important to America." But he continued his assault on the Kyoto treaty, calling it "fatally flawed in fundamental ways," and said still more study is needed on global warming before any action is taken.

"I've asked my advisors to consider approaches to reduce greenhouse gas emissions, including those that tap the power of markets, help realize the promise of technology and ensure the widest possible global participation," Bush said. "As we analyze the possibilities ... our actions should be measured, as we learn more from science and build on it."

Bush said any treaty must include emissions limits for developing nations, including India and China, currently exempt from the Kyoto Protocol. Barring that, Bush has stressed voluntary measures to cut pollution, much like the ones he has embraced both as Texas governor and as president. Not surprisingly, Bush's statements did not go over well with environmentalists, both here and abroad.

"The president's approach to global warming is like commissioning a study on fire while your house burns down," said Sierra Club executive director Carl Pope. "President Bush's approach of merely studying global warming is irresponsible and will embarrass the United States in front of the rest of the world."

"It was a lot of 'blah, blah blah,'" said Nancy Kete, director of the World Resources Institute's climate, energy and pollution program. "It was disappointing but not surprising. He said repeatedly that he takes global warming seriously. But the proposals he put out are really timid. In six short months this president has set us back 10 long years."

"It's simply not acceptable that one country, even an important country such as the United States, would declare that an international agreement is not valid," said Bo Kjellend, lead European negotiator on climate control issues. "The United States had signed the Kyoto Protocol already. We believe they should now abide by this international agreement."

Others have responded with a mixture of condescension and sarcasm. Take this headline from the U.K. Guardian last week: "It's true Mr President, the world's hotting up."

If there is a public relations problem for Bush on the continent, Kjellend says, it is one of the administration's own making. "I think the various style of some of the statements that were made in the early stages gave rise to the feeling that this was an administration that went too far," he said diplomatically.

The idea of voluntary measures to curb global warming was rejected by Swedish environmental minister Kjell Larsson. "I don't believe there is any kind of voluntary system that could be satisfactory," said Larsson in an interview with the BBC. "We tried voluntary before we started working on the Kyoto Protocol and everyone concluded that this is too big, too general an issue to be dealt with by voluntary agreement."

While Bush's energy policy is creating problems for him abroad, it has also given an issue to Democrats, who are increasingly using the environment as a sledgehammer with which to bash the president. "The Kyoto agreement had its flaws, but they were fixable," Sen. Joe Lieberman of Connecticut said in a statement Monday. "By walking away from the agreement, the Bush administration has walked away from the only international process by which we would be able to address this very real and growing problem. The result may very well be that the rest of the world carries on without us and in a way that is detrimental to our economic interests."

But the Bush administration hopes the president's five-day jaunt -- which will take him to Spain, Poland, Sweden, Belgium and Slovenia -- will fundamentally change Europe's negative perception of the new president. It will give him a chance to wage one of those "charm offensives" Bush so relishes, even as he tries to kill two international treaties in the process: the 1972 anti-ballistic missile treaty as well as the Kyoto Protocol.

Bush will discuss the ABM treaty when he meets with Russian President Vladimir Putin in Slovenia on Friday. But the administration has made it clear that Bush is not eager to talk specifics on this trip. Just take this characterization from National Security Advisor Condoleezza Rice about Bush's meeting with Putin.

"We're not expecting major agreements here," Rice told reporters last week. "What we really are doing here is establishing a foundation with these two presidents in their personal relationship that can help us to promote a constructive and realistic relationship with Russia."

Bush sounded a similar tone in his statements on global warming Monday. On Thursday, he will attend the United States-European Union summit in Sweden, where he is sure to hear his share of criticism from European leaders over the new administration's efforts to wiggle out of the Kyoto Protocol. Every head of state, with the exception of newly elected Italian Prime Minister Silvio Berlusconi, has pledged to back the treaty.

But Rice and others in the administration would much rather accentuate the positive. "The one thing the president will really underscore is that we have more in common than we have in disagreement, and that we really should be celebrating that which we have in common."

Still, there's no doubt public criticism here and abroad has led the administration to try to spin its energy and environmental policies differently.

The Sierra Club's Becker and other environmental leaders met with Vice President Dick Cheney last week, as the administration tried to bolster its environmental credentials after being widely criticized for its energy plan. In addition to Cheney's meeting with several big-name environmental groups, Bush made trips to the Everglades and to Sequoia National Park in California, offering modest proposals for protecting national parks.

But while the president was posing for photo ops at home, Europeans grew increasingly angry about American backsliding on global warming. "Countries like the Netherlands are faced with flooding from rising sea levels," said Becker. "Britain has had floods and horrendous rainstorms for several of the last years. There are droughts in some of the southern European countries. They take this issue very seriously."

Appearing on "Fox News Sunday" this weekend, White House Chief of Staff Andrew Card appeared unmoved. "I think they have been driven by emotion rather than by science," he said of the Europeans.

But the administration's reluctance to act could lead to a showdown with Congress. Currently, there are several tough environmental proposals pending in Congress, including a push to raise fuel efficiency standards of new cars, which is gaining momentum. "That would be the biggest step we can take in curbing global warming," Becker said. "We discussed that with the vice president's staff and they did not close the door to it." A small block of moderate Republican senators -- including Olympia Snowe and Susan Collins of Maine, Lincoln Chafee of Rhode Island and John McCain of Arizona -- is "very supportive of raising CAFE standards," he said.

Of course, any trend toward environmental moderation could bring Bush into conflict with his energy-industry friends, who made enormous campaign contributions to his presidential run.

But some in the environmental community say the administration has no choice but to moderate its plans, given the new domestic political realities. "It was dead on arrival," says Kete of the Bush energy policy. "There are things in the energy plan that even some Republicans laughed at, things like the eminent domain provisions [which would give Washington the power to seize private property for new transmission lines]. Now with the Senate switch, there's no way we're going to get that plan."