This clunker is so inept, it doesn't even provide an opportunity to ogle Angelina Jolie properly. 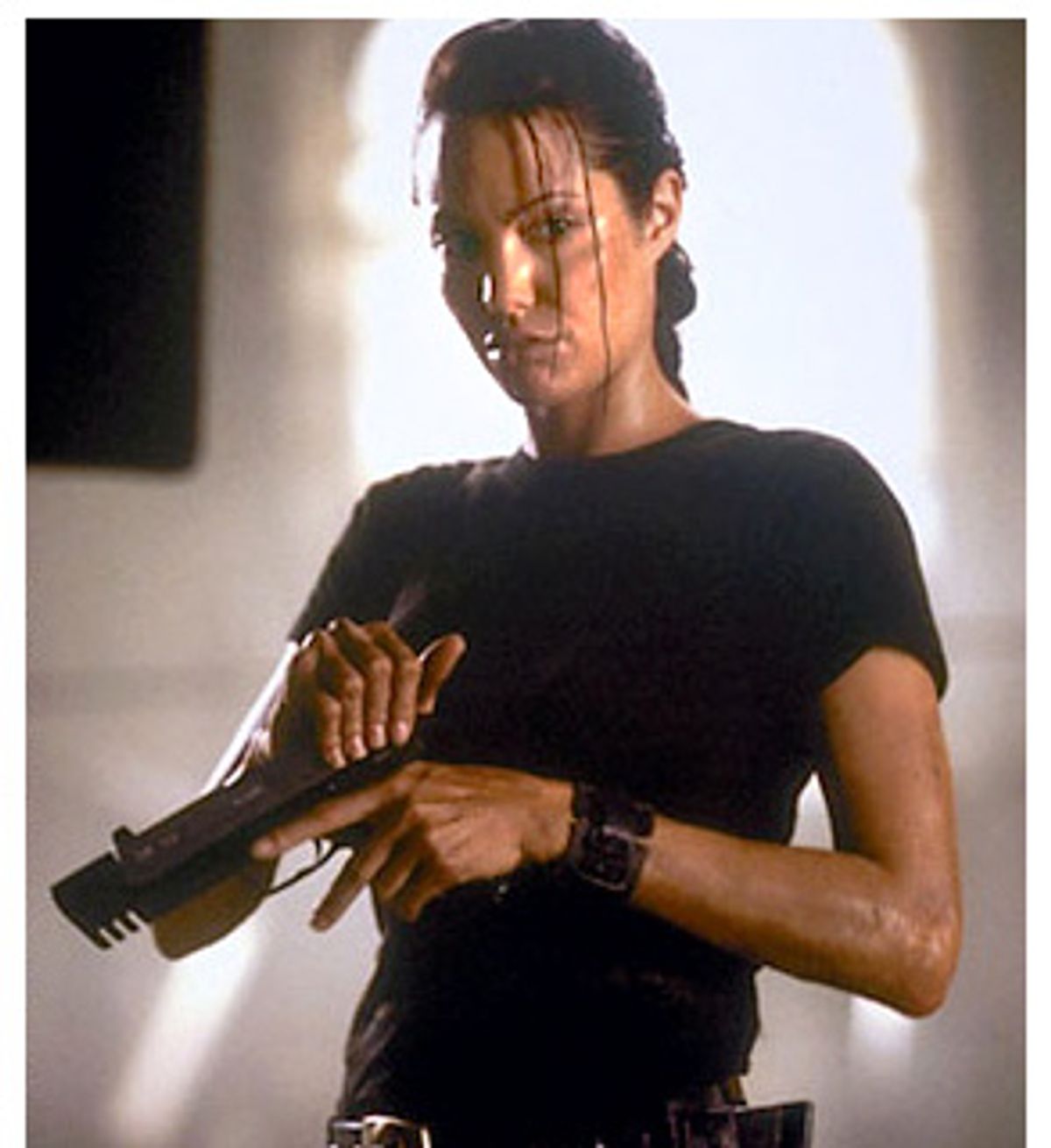 Teenage boys who have played the Tomb Raider video games or read the comic books will want to see the new movie version, which stars Angelina Jolie as Lara Croft, the heroine who might be described as a 2BK girl -- butt-kicking and big-knockered.

And so will older boys, like the ones at the preview screening I attended, who cheered and applauded each and every one of the divine Angelina's jiggles. (Heaven forfend that I should stoop to such a display; let's just say I grinned a lot.)

There are a lot worse reasons to go to the movies than to ogle a beautiful star (and this applies to stars and audiences of all genders and orientations). But "Lara Croft: Tomb Raider" is such an inept bundle of work -- crying out for the filmmaking equivalent of Ritalin, but still as sluggish as syrup -- that it doesn't even provide an opportunity to ogle properly. Oh, there's a brief and rather glorious side view of Jolie's bountiful breasts when she steps from the shower. And of course she spends much of the movie in Lara's uniform of tight T-shirts (and apparently, judging from the, uh, looks of things, some sort of nipple restraints) and short shorts.

But our glimpses of Jolie, like our glimpses of everything else, are chopped up and brief in the visually incoherent style of hacks who've aped the form of the music video but mastered none of the internal consistency that you get in the work of video directors like Michel Gondry or feature directors like Baz Luhrmann, who, even at his nuttiest and most maddening, always operates from an idea.

There's no telling what the director, Simon West ("Con Air"), operates from: Judging from the look of the movie, I'd guess one of those mechanical bulls that was featured in "Urban Cowboy." The camera swings around and jerks hither and yon as if it had been mounted to Charo's hips instead of a tripod. And I'm sure that with the use of the paper shredder I received last Christmas I could learn to duplicate Dallas S. Puett and Glen Scantlebury's editing scheme. Let's just say that if spatial relationships are part of what you require to make sense of a movie -- you know, telling where the characters are in proximity to one another, something that tends to help when good guys and bad guys are squaring off -- then maybe it's time to stay home and get started reading "The Count of Monte Cristo" as you've always meant to.

There are a few nifty visual ideas among the movie's bread crumb scatterings: a shot of Lara firing a rifle as the motorcycle she's riding becomes airborne, another of her popping a wheelie on her front tire to pivot the bike around and smack a baddie in the head with the rear wheel or a bit lifted from Ray Harryhausen where statues of monkey warriors and a giant many-armed Shiva figure come to life. But they're shot close in and fast, and there's no time to luxuriate in them, no way of telling how close or distant Lara is to the villains on her tail. One sequence should be delirious: We see Lara, in the foyer of her English country manor, suspended from bungee cords, doing midair somersaults and swings as Bach's Piano Concerto in F Minor plays on the soundtrack. But again, West chops up the sequence, cutting from angle to angle instead of allowing it to flow and allowing the audience to indulge in our fantasies of being freed from gravity.

Plotwise, the movie is a mishmash of the Indiana Jones pictures and "The Matrix," with some airborne martial arts (Lara running around the walls of her manor from a cord attached to her chandelier as if it were an aerial maypole) out of "Crouching Tiger, Hidden Dragon." (And maybe this is stretching, but the climax, taking place around a giant model of the solar system, calls to mind the fight in front of a gigantic globe that climaxes Samuel Fuller's '50s pulp noir "House of Bamboo.")

Lara has to retrieve some ancient thingamajig that, fitted together during the alignment of the planets (a once every 5,000 years event, we're told), will give unprecedented power over time to whoever possesses it. Her adversaries are a shadowy organization kitted out in vaguely Masonic symbols who, natch, want power over the whole world. There's also a Freudian subplot with Lara haunted by the death of her father (played by Jolie's dad, Jon Voight) years before.

Trying to follow the plot gave me new sympathy for the guy in "Memento": The movie is so nonsensical, jumping from London to Venice to Cambodia to Alaska, that I felt I couldn't remember anything beyond what had happened a few minutes before. As for trying to put it all together, who can be bothered? The movie exists only for the set pieces, and they haven't been done with that much care. The computer graphics effects are remarkably shoddy and cheap-looking and the cinematography, by Peter Menzies Jr. (you mean there's another one?), is murky and dank. There's no wonder in the ancient tombs Lara breaks into and no real plumminess in her posh mansion.

Apart from Noah Taylor (who, as the teenage David Helfgot, stole "Shine" out from under Geoffrey Rush), stuck in the eccentric techie role, the supporting cast is anonymous and undistinguished. Iain Glen, as the main baddie, lets his square jaw, scowl and hair gel stand in for a performance. They're like the Eurotrash version of colorless American character actors like Whit Bissell and Carl Betz.

You can see why Jolie was cast. With her slim build but voluptuous lips and breasts, she has something of the absurdly curvy build of the cartoon Lara Croft. But Croft isn't really a character -- she is never fleshed out beyond her being an orphaned, rich adventuress. There's no distinguishing wit in the conception, no inner torment beyond the generic missing-daddy angle. She's a sex fantasy for teenage boys, but she lacks the distinguishing details that would really fire the imagination, that would make her a real turn-on (in the manner of great pulp characters like Catwoman or James Bond or Tarzan).

And that's why Jolie is all wrong -- because she's so much more than a sex fantasy. She has yet to have a first-rate movie to show off her talents, but in addition to being a wildly talented actress, she is an astonishing presence. In varied roles in "Playing by Heart," the underrated "Pushing Tin" and "Girl, Interrupted," Jolie has been a distinctive mixture of delicacy and aggression, and her thick sensuality seems both commanding and slightly unstable, as if it's about to unmoor her. She does fine with her English accent, and she affects the action-hero confidence quite well, but she's like a guest star in her own vehicle. A movie that gets its only cheers from her bouncing breasts is a particularly poor thing. It's the addition of the other dimensions that have made her a knockout, a turn-on for your heart and head as well as your loins.