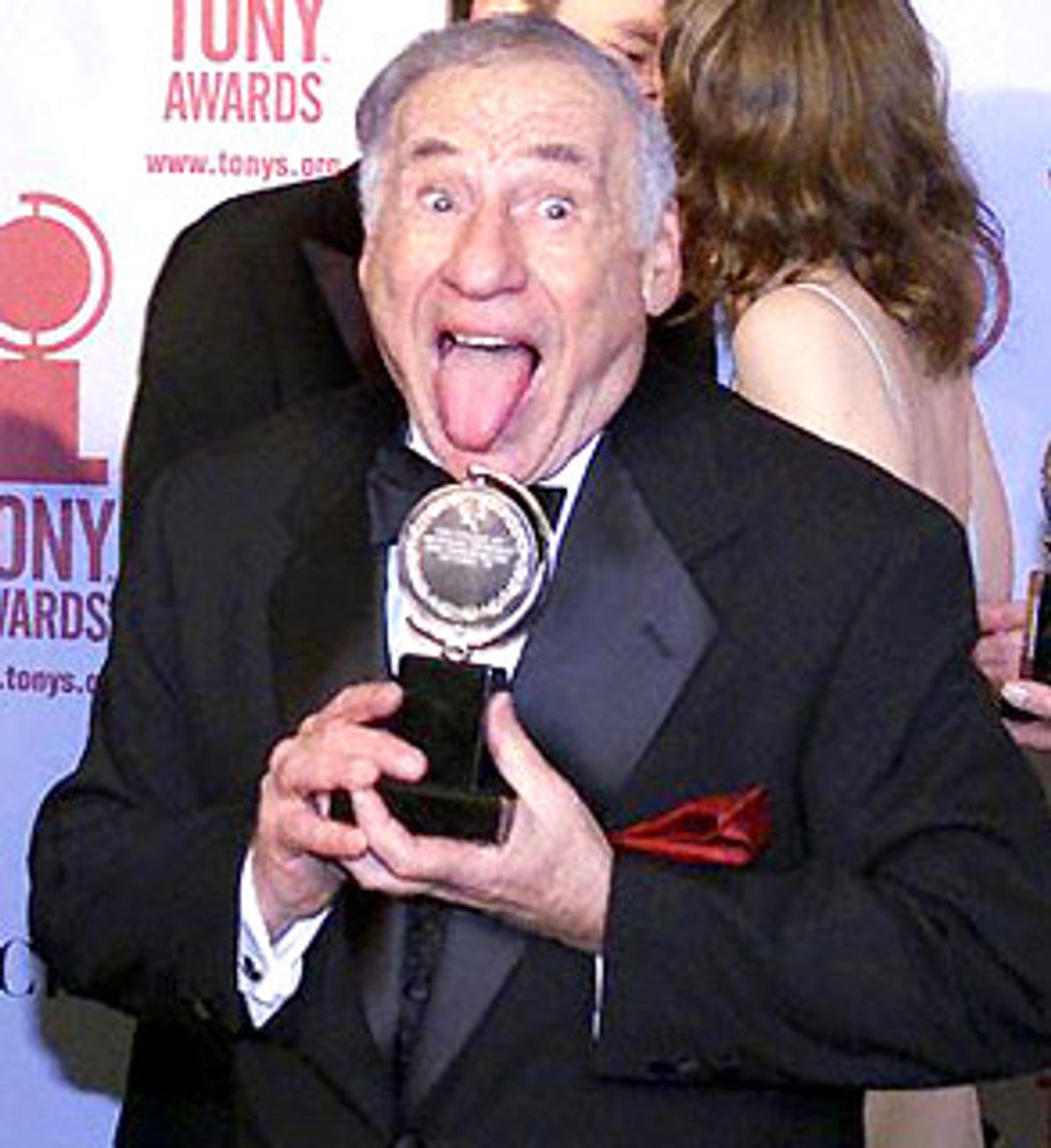 Sondheim didn't do it. Bernstein didn't, either. Rodgers and Hammerstein put together didn't come close. No, the creator of the Broadway show that smashed all the box office records is the man who gave us "Spaceballs." The maestro who revitalized the Great White Way is the guy who brought fart jokes to major motion pictures. And the impresario whose show netted an unprecedented 12 Tony awards was also the only winner to ever thank Hitler in his acceptance speech.

Like his hit musical "The Producers," Mel Brooks is an unlikely combination of innocent optimism, bawdy irreverence and unbridled chutzpah. And if, at age 75, Brooks is the bright new darling of the American theater, it's because he has spent a lifetime brazenly getting in our faces and shamelessly prodding us to laugh, and because, for all the alleged comedy in our must-see TV and Tom Green world, we're starved for real humor. We need Mel Brooks to make us laugh as much as he needs to make us laugh.

Melvin Kaminsky was born in Brooklyn, N.Y., in 1926, on, he has proudly noted, the 12th anniversary of the assassination of Archduke Ferdinand. His father died when he was 2. He was a poor, picked-on Jewish kid who, like so many great clowns, learned early to use comedy as a defense against bullies. By the time he was 14 he was already working his way up the comic ranks in the Catskills, pratfalling by the pools and lobbing barbs from the stage whenever a sympathetic hotel manager would let him.

He joined the Army at age 17 and became a combat engineer, fighting at the Battle of the Bulge. After the war, he went to work for his old Catskills buddy, Sid Caesar, and spent nine years writing for a string of his television series. It would prove a rich and ruthless training ground -- each week, Brooks was competing to get his gags on the air alongside those from youthful contenders like Neil Simon and Woody Allen. He couldn't just be funny, he had to be funnier than anybody else. It made him fearless to the point of frantic, and it solidified the "Bombard them with jokes till they cry 'Uncle'" style that would become his trademark.

It was during his apprenticeship with Caesar that he became friends with fellow comedic upstart Carl Reiner. When Reiner one day jokingly asked his pal if it was true he'd been present at the Crucifixion, Brooks took off with the bit and ran with it. Eventually Reiner's droll inquisitor and Brooks' aged observer made their way onto a series of comedy albums. To their surprise, the 2,000-Year-Old Man routine became a bestseller, and gave Brooks his first taste of fame.

Brooks followed his albums by co-creating, with Buck Henry, the spoof series "Get Smart." A goofy blend of spy shtick and gimmickry, it lacked the brilliance of "Your Show of Shows," but it further established its creator's comedy pedigree. It genially mocked the notion of U.S. intelligence as intelligent, thumbing its nose at Cold War paranoia. But Brooks wanted more. He wanted, among other things, a real war to make fun of. And what better than the one he'd actually fought?

There was once a period when the name Hitler was not automatically associated with the word "springtime." The 1968 movie "The Producers" changed all that. The fractured tale followed two losers who conspire to make a million bucks by mounting Broadway's most spectacular flop. The production turns out to be "a gay romp with Adolf and Eva at Berchtesgaden" -- and an unlikely smash.

Today, it may be flying off the shelves at Blockbuster faster than "Gladiator," but in its initial release, "The Producers" was anything but a critical or box office success. Though the screenplay won an Oscar, critics scratched their heads, and moviegoers outside the Five Boroughs largely ignored it. Brooks' second film, "The Twelve Chairs," provoked even less reaction. His next career move, however, put him firmly at the forefront of American comedy.

Collaborating with Andrew Bergman, Brooks came up with an idea as offbeat as a singing, dancing Führer -- a jive-talking, thoroughly modern black man who becomes the sheriff of a frontier town. The notion, as Brooks explained in 1975, was simple: "He'd say 'Right on, baby.' And they'd say, 'Consarnit!'" The result was "Blazing Saddles," a ferocious sendup of that venerable American institution, the western. With a writing team that included a young Richard Pryor, Brooks managed to make a movie that was both flagrantly shocking and utterly embraceable.

"Blazing Saddles" was Brooks at the top of his game, doing what his many imitators have never been able to match. Everyone from the Zuckers to the Farrellys knows that rapid-fire jokes, especially the cheap kind, always go over well. Ditto for anything involving sex or bodily functions. But what distinguished Brooks was his gift for sneaking bold social comment in the mix. "I think most of my movies are serious," he has said. "They have their roots in some terrible things." He just put those things in there in a way that was so good-natured, so unaccusatory or nonangry, that they went down as cool and sweet as ice cream.

"The Producers" had been the story of two Jews and an affable German war criminal who mount a play featuring storm troopers singing, "Look out, here comes the master race." No wonder not everybody got it the first time. But a great Brooks production isn't insensitive or cavalier. On the contrary, Brooks does care, enough to go off to fight Nazis while still a teenager, to humbly thank "an avalanche of Jews" as he accepts a Tony. It's just that he isn't afraid to shrug and blow a big raspberry in the face of things that would otherwise scare the crap out of us.

"Blazing Saddles" similarly bounced the ball against concepts that normally make people squirm, and did it with persuasive aplomb. It's a movie that unblinkingly bats around the word "nigger" and famously makes sport of white anxiety about black sexuality. Cleavon Little's "Excuse me while I whip this out" isn't just funny, it's disarmingly so, a moment so loose and silly the tensions it springs from are cleverly reconfigured.

The movie was a winner, and Brooks followed with the lesser but still appealing "Young Frankenstein." A straightforward parody rather than social satire (co-written with its star Gene Wilder), "Young Frankenstein" nevertheless turned classic movie convention on its head -- and even managed to slip in a few barbs at the expense of academia and authority. Brooks had another hit.

But after a string of successes, Brooks seemed to lose his way, or at least to rest on his laurels. Subsequent films, from "Silent Movie" to 1995's unforgivable "Dracula: Dead and Loving It," lampooned cinematic formulas without the sweet affection for the originals of Brooks' earlier works. The later films overflowed with gags, but rarely found the smart, sharp underpinnings that had made his first few films such treasures. (There were momentary exceptions -- notably "History of the World Part I's" showstopping ode to the Inquisition.)

Redeemingly, all the while he was directing less and less entertaining works Brooks was also producing. Under the aegis of the dignified-sounding Brooksfilms, he was quietly bringing high-quality films like "The Elephant Man" and "Frances" to the screen.

It wasn't a bad way to wind up -- a respected businessman and beloved creator of a handful of classic comedies. Sure, his shtick might be out of touch with contemporary audiences, but so what? Who doesn't expect to have their best work behind them by their 70s? Who even plans to still be working at all then?

But Mel Brooks isn't like the rest of us. So the love of the stage that drove him to do Catskills stand-up as a teenager and infused his first film with its lighthearted center eventually and inevitably led Brooks to Broadway. Collaborating with an enviable theatrical team including director Susan Stroman and stars Nathan Lane and Matthew Broderick, Brooks finally brought his Broadway valentine to Broadway. "The Producers" opened in April and the response was enthusiastic, to say the least. If you're lucky, you might be able to get tickets for April 2002.

Sizing up the competition at this year's Tonys, including the Masterpiece Theatre bombast of "Jane Eyre" and the dated schmaltz of "A Class Act," it's a no-brainer why "The Producers" steamrolled over the rest. It's energetic. It's irreverent. It marks a return to Brooks' intelligent brand of absurdity -- no other writer could sum up Hitler's rise to power with "I was just a paperhanger, no one more obscurer. Got a phone call from the Reichstag, told me I was Führer." In short, thank God, the show's as funny as hell.

But there's something else behind its success. Along with the pleasure of a show that's bright and tuneful and casts the most notorious figure of the 20th century as a dimwitted drag queen, there's the Mel factor -- the relief in seeing that talent doesn't have to be an exhaustible resource, and that youthful exuberance isn't always wasted on the young.

The day after the Tonys, the New York papers featured photos of the triumphant "Producers" creator holding his award and mugging for the cameras. Brooks will never be a paragon of dignity, but he sure looks like he's having a good time, and it's infectious. There's a moment in the play, after "Springtime for Hitler" becomes a hit, when Max Bialystock exasperatedly wails, "NOW they like me!"

The same could never be said of his offstage counterpart. We've always loved Brooks, no matter how checkered his career. We've just been waiting for this moment to see what we've always hoped -- that he's still got it, and, baby, he still knows how to flaunt it.