Kindly get your humble pie out of my face

In our opinion, overachievers should leave the modesty to the rest of us. 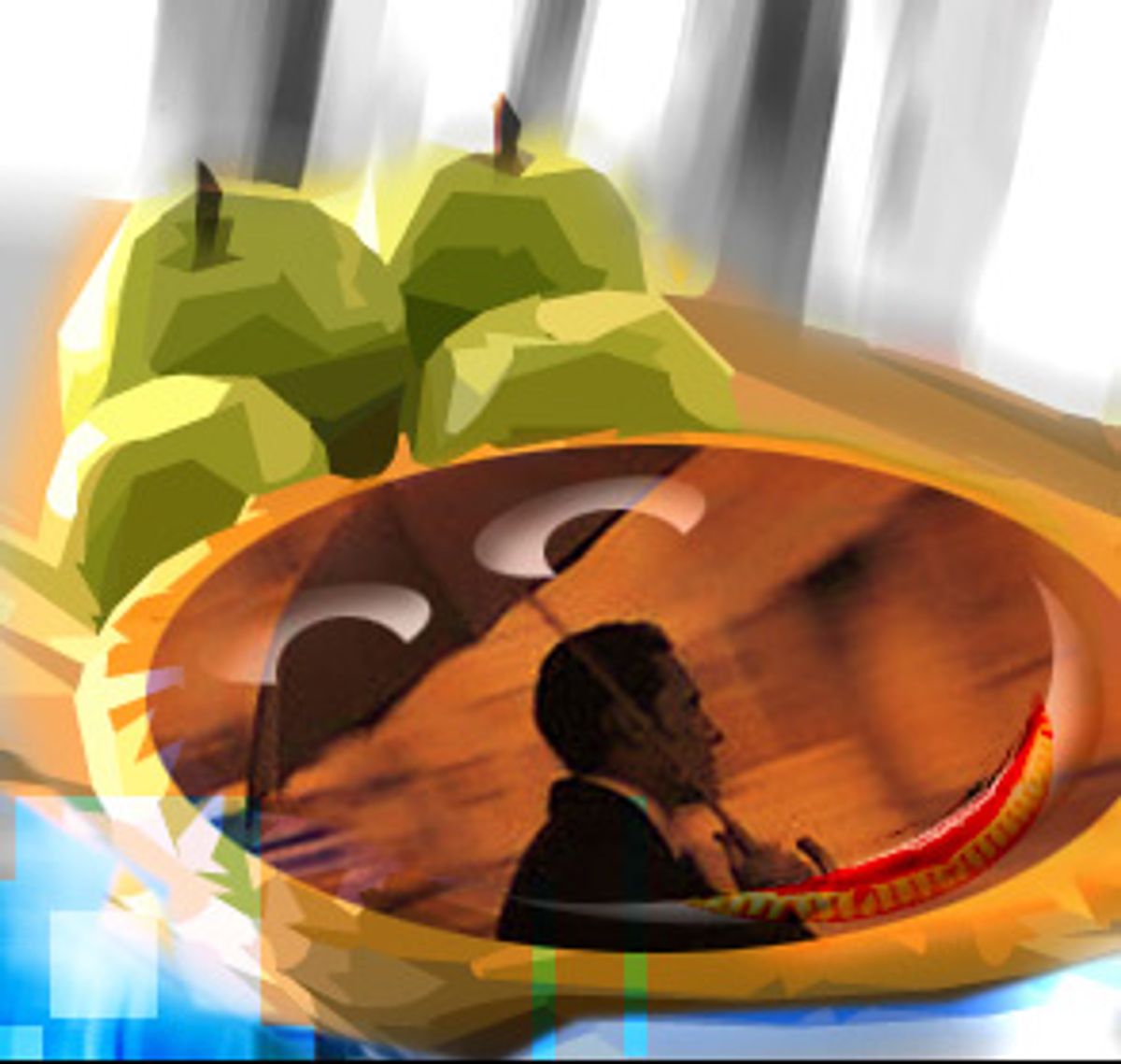 Recently, I found myself sitting, very reluctantly, next to a young English investment banker at a wedding. After racking my brain for a topic of conversation, I asked him how the investment banking business was going.

"Oh, really? What are you doing now?"

I tried to imagine this guy -- I'll call him Johnson -- behind a counter, wearing an apron, smilingly pointing at sausage. The image refused to form. Johnson is a good-looking, flashy kind of guy. His dad once bought him a Porsche for his birthday because Johnson apparently needed all his extra money for -- what? Drugs? Pork futures? Confetti?

"Really," he said, lighting a cigar and smiling beatifically. "I feed people."

Meanwhile, Johnson's junior jet-set girlfriend beamed at him from across the table, her left breast peering out eagerly from the edge of her wrap dress, wanting to join in. I didn't know whether to smile and introduce myself to the breast, excuse myself or keep playing the patsy.

It turns out that Johnson had recently started an online grocery delivery service. At first, this sounded like good news -- but before I could celebrate his imminent bankruptcy, I found out that he had just sold the business to a major supermarket chain for sums I can't even pronounce. Furthermore, the annual income of Johnson's father and the GNP of Bolivia could easily be mistaken for each other in the dark. Johnson could have been a mental midget with a face like an anvil and nobody would notice, so his smarmy impersonation of "a regular guy" was irritating. The whole point of the exercise was to say, "You can't picture it, can you? Because I am so unimaginably fabulous."

My conversation with Johnson reminded me of another one I had, a few years earlier, at a party at the Sundance Film Festival (aka Utah's premier frozen meat market). The party was crawling with wannabe players, like the guy who will tell you, in all seriousness, that the network made a big mistake canceling "Baywatch Nights" because "not only is David Hasselhoff one of the nicest people in Hollywood, he's also a genius" -- before casually slipping you his card identifying him as a producer on "Baywatch Nights."

"Really?" I asked, suddenly nervous. "What do you write?"

"I write for this little show. You may have heard of it; it's called 'Seinfeld.'"

Which brings me to this humble discovery about false modesty: The whole point of it is to bludgeon other people with your shimmering superiority while lowering the standards until you're the only one left standing because everyone else has been shunted off to the underachievement dungeon.

Fake humility, after all, is a luxury few authentically humble people can afford. It's no fun telling old friends from high school that you're flipping burgers for a living if they're likely to believe you. It only works if it's so preposterous a thought that they will throw back their heads, roar with laughter and say, "God, you are so unimaginably fabulous!" Otherwise, it just makes everybody uncomfortable. Take, for example, "Pearl Harbor" star Josh Hartnett calling himself "a stupid little guy" in this month's Vanity Fair. It is doubtless true, but still, how does it make the guy who has to write this sort of thing down feel? What does it say about the unemployed actor who refers to his sad miming (no money for props in the solo show budget) as "space-object work." See? Everyone comes out looking bad.

For false humility to function as a cudgel against those less fortunate, of course, the modest megalomaniac must have clear evidence of his own superiority. A feeling of entitlement, although it goes a long way in encouraging smug self-satisfaction, is often not enough. It must be bolstered by actual achievements as well as a sense of manifest destiny. The Bush family, in general, has this feeling in spades. Our president, however, still displays the amazement at his good fortune and good-humored self-effacement of the chronic underachiever. While chatting idly about the 2000 election with Swedish Prime Minister Göran Persson not long ago (unaware that he was being trailed by a news crew) Bush confessed, "It was amazing I won."

It's one thing to be modest because you have nothing much to say for yourself; it's another to co-opt modesty because you already have everything else. This is not slumming, it's gentrification. Meanwhile, the losers, the frauds, the has-beens and the never-weres -- crowded out of their rightful place on the margins of self-importance -- are forced to adopt the attitudes of the rich and successful. There's nothing left for us to do but crack open a beer, light a cigarette and say, "God, I'm a genius."

To which our unemployed friends will respond, "Yeah, I rock."