Crazy love became heartbreak when I found out that Edward was in love with another guy instead of me. 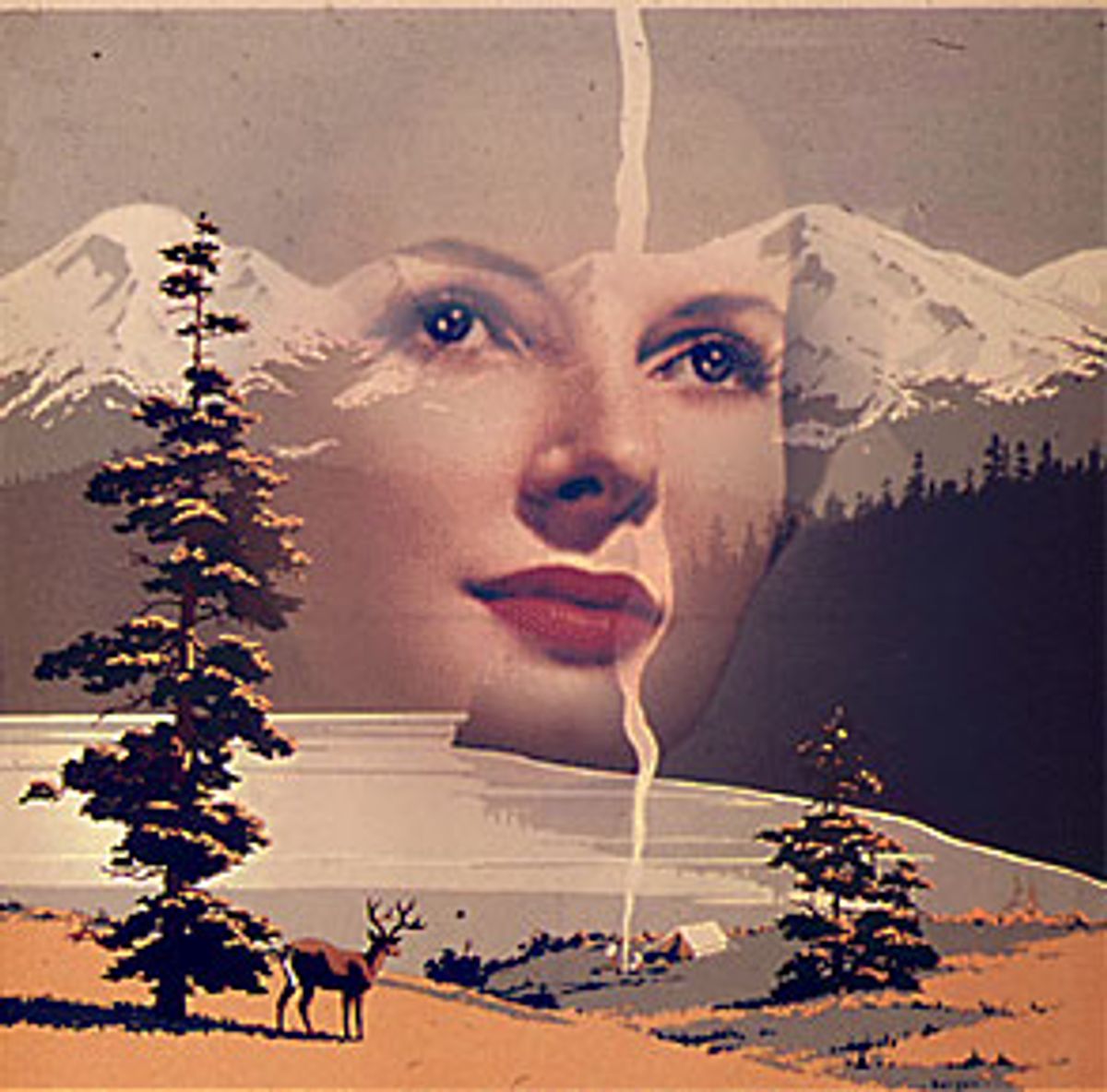 When I was 19, I lived in Yosemite National Park for a summer and fell in love with a gay man. I can see now that I must have known, at least subconsciously, that he was gay. But at the time, I was so crazy about this guy I couldn't see straight. The attention he showered on me was captivating, like the first sun of the season on bare shoulders. I closed my eyes, basked in the glow and never considered how an affair with him might end.

Edward was 25 and had blond hair that fell in big, loose curls around his tan and chiseled face. We worked together at the village store in Yosemite. It was dingy and dirty from the dust of Yosemite in the summer, and constantly filled with tourists who had driven from all over the country just so they could wait in line to buy Yosemite toaster tongs or laminated El Capitán place mats. The store sold sweatshirts with neon graphics, the worst of which was a bestseller: It had "Stokin at the Dome!" emblazoned across a hot pink outline of Yosemite's famous Half Dome.

Edward had spent the last few winters in Colorado as a ski bum doing odd jobs, and his service industry skills left a little to be desired. He cut this bitchy quote by Hutton Wilkinson out of the newspaper and left it on my cash register one morning: "Every night, I pray that people with money get taste and people with taste get money." I pasted it in my journal.

Right after I met Edward I wrote in my journal: "I am totally intrigued by a man that I work with named Edward. He's a student at the Academy of Art College in San Francisco. I love working with him. We just talk and talk all day long."

Before I met Edward, my romantic past had consisted of a naive relationship in high school with Rob, my first boyfriend. Rob's sole goal in life was to steal my closely guarded virginity. His merciless efforts night after night on the nubby brown couch in his family's front room were the focus of the vast majority of the time we spent together. He was a sweet guy and he was hung up on me. But mostly he liked to drink beer, smoke pot and play basketball. He was a big fan of the '80s rock band "Heart," mainly because he thought the slutty female lead singers with their big hair and pouty mouths were hot.

Compared with Rob, Edward was fascinating. He told me stories about traveling in Europe, painting in the park at the foot of the Eiffel Tower and hanging out in cafes reading and sipping cappuccino. Everything Edward described sounded romantic and worldly to me. I grew up in a bedroom community east of San Francisco, a sterile if pleasant town with too many strip malls and a lot of tract housing. I went to Mexico to work in an orphanage with my church group in high school once, but other than that and family vacations in the Sierras, I'd pretty much been stuck, bored, in suburbia.

Edward listened to what I now know to be New Age jazz, but at the time, all I heard was "jazz," which seemed mature and smooth. But he also listened to the Cure and the Smiths, bands I associated with a group of older, aloof but very cool goth kids in my hometown. Edward's favorite movie was "Jules and Jim," but he would explain it like this: "Do you like Truffaut?" I don't remember how I responded, but I had no idea who Truffaut was and the fact that Edward did know seemed sexy and sophisticated. He was always telling me about books I should read or films I needed to see or museums I had to visit. I had the urge to take notes while he talked to me. I wanted to memorize the words coming out of his mouth.

When we worked together, Edward ignored everyone else, concentrating all of his energy on me. His eyes bore into mine while we talked. He'd nod his head and smile while he listened to me, as if everything that came out of my 19-year-old mouth was witty and wise.

Within a few weeks we were spending most of our free time together in addition to the time at work. We got up at 6 a.m. to watch the hang gliders take off in the silky sunrise from the top of Glacier Point, and then spent the next five hours hiking down the mountain, talking all the way. We drove out to the Wawona tunnel at night and crawled through a pitch-black opening in the wall to sit on a secret granite ledge and look at the stars. We stayed up until 3 a.m. talking in each other's tent cabins. He showed me worn photos from his travels and I listened and watched. I couldn't get enough.

By the middle of the summer, I felt like I was falling in love with Edward and I wondered if he was falling in love with me. Once, he joked that as soon as I finished college and he finished art school, he was going to come find me and marry me. Edward hung around with my best girlfriend, Claire, on his breaks and bombarded her with questions about me. Claire relayed everything he said about me later in the tent cabin I shared with her.

The whole summer was like being away at camp, except we were all young adults. You could sleep with the other campers and drink beer and get high, and it didn't matter if you stayed out too late or partied too much because we were all doing these menial jobs that required minimal concentration and responsibility.

If I'd chosen to pay attention during all of this summer fun, I might have noticed the clues that Edward's interest in me was, while sometimes intense, often also reticent. He stood me up, twice, when we had specific plans to meet and gave me only the vaguest of excuses when I confronted him. He talked obsessively about his friend Kurt, in the same way as one would talk about a lover. Apparently they had vicious fights, but they also had intimate inside jokes that Edward would describe to me with fondness. Plus, my relationship with Edward was for the most part platonic.

He'd kissed me at the beginning of August. I wrote in my journal: "So much has happened! Edward kissed me! FINALLY!!! It was awkward but sweet. I really, really like him a lot." We'd walked home together from an employee party in a nearby campground. We were both a little drunk, and when we got to my cabin we stood around awkwardly in the dark, laughing. He took a step toward me and put his cool hands inside my tank top. He pulled me to him and we kissed tentatively. He tasted like beer and smelled clean and the kiss was over practically before it started.

The lack of sex in our relationship didn't concern me much. Edward knew that I was inexperienced. I'd ended up sleeping with my high school boyfriend right before I left for college, but I hadn't slept with anyone else since. I told myself that Edward was being respectful and chivalrous -- a gentleman. And that seemed romantic. After Rob's callous persistence, the sexual distance Edward kept between us was a relief. My infatuation helped me ignore the fact that Edward was, by all indications, uninterested in having sex with me.

Finally, late one night, Edward eked out his confession. It was something like 4 a.m. and we'd been lying side by side on his single bed talking for hours. Edward told me that he had "intense emotions for me that sometimes he wished were lesser." He told me that our friendship was important to him, that he cared about me a lot and that sometimes he thought he loved me. I listened quietly, waiting for him to get to the point I knew he was tiptoeing toward.

Edward assured me that he was physically attracted to me but said that he hadn't slept with a woman in four years. He told me that he wanted to sleep with me, but that Kurt was also his lover and that he was going to visit him in the Cayman Islands at the end of the summer. He talked quickly and erratically, describing himself as "gay," and then "possibly bisexual," finally stating loudly that he hated labels.

I was confused and hurt. My journal reads, "Edward told me last night that he is bisexual. I am not entirely surprised but it just makes everything so much more confusing and complex. He told me he's not into the gay scene and that he hates labels. I think that's screwed. I alternate between being angry and being sad and wanting to ignore it all. I don't think it's fair. I want him to choose one or the other and I want him to choose me."

I called my mom from a pay phone and told her everything, crying. She'd been listening to my reports of how wonderful Edward was all summer long. Once she heard that Edward had a boyfriend she freaked out and gave me a long lecture about AIDS. She scared me and I began to think that breaking up with Edward might be the best thing to do. But that idea dissipated as quickly as it had formed once I got off the phone with my mom.

We had just over a week left together before Edward left for the Cayman Islands. I went ahead and wrapped up my summer romance with a B-movie ending, complete with I-love-yous and a teary goodbye under the redwoods. Edward promised he'd call from the islands. I assumed he'd break up with Kurt. I was insanely naive.

Edward never called. Kurt knew that Edward had been involved with me and was annoyed that Edward had been fooling around with a girl. It probably took Edward about two seconds and one hot kiss before he fell back into Kurt's bed. Edward sent me an oversize postcard with tropical fish on the front. He mostly described the trivialities of island life but he ended the card with: "I miss you. Life is complex. -- Love, E." Once he got back from the islands we exchanged a few phone calls, but we were both in school by that time and our relationship fizzled in a way that only the promise of a campus full of new people to date allows.

I ran into Edward a few years ago in a vintage clothing shop in San Francisco. I was killing time with my husband before a movie. Edward was looking through a rack of silk ties. I couldn't believe he was standing right there in front of me. I studied his profile from a distance for a while, trying to figure out if it really was Edward. I tapped him on the shoulder and watched his face as he recognized me, while my heart tried to beat its way out of my chest. Our conversation was unremarkable, and marred by awkward pauses, but I was glad to see him. It felt surreal to be chatting with this man I'd once thought I was in love with but hadn't thought about or seen in 12 years. Edward was right: Life is complex. If I have learned anything in the last decade it is that while my heart often seems fickle, it also doesn't forget.

Catherine Davis is a freelance writer.