Down with the sports monopolies! In the FanCast.com future, we all get to do the play-by-play. 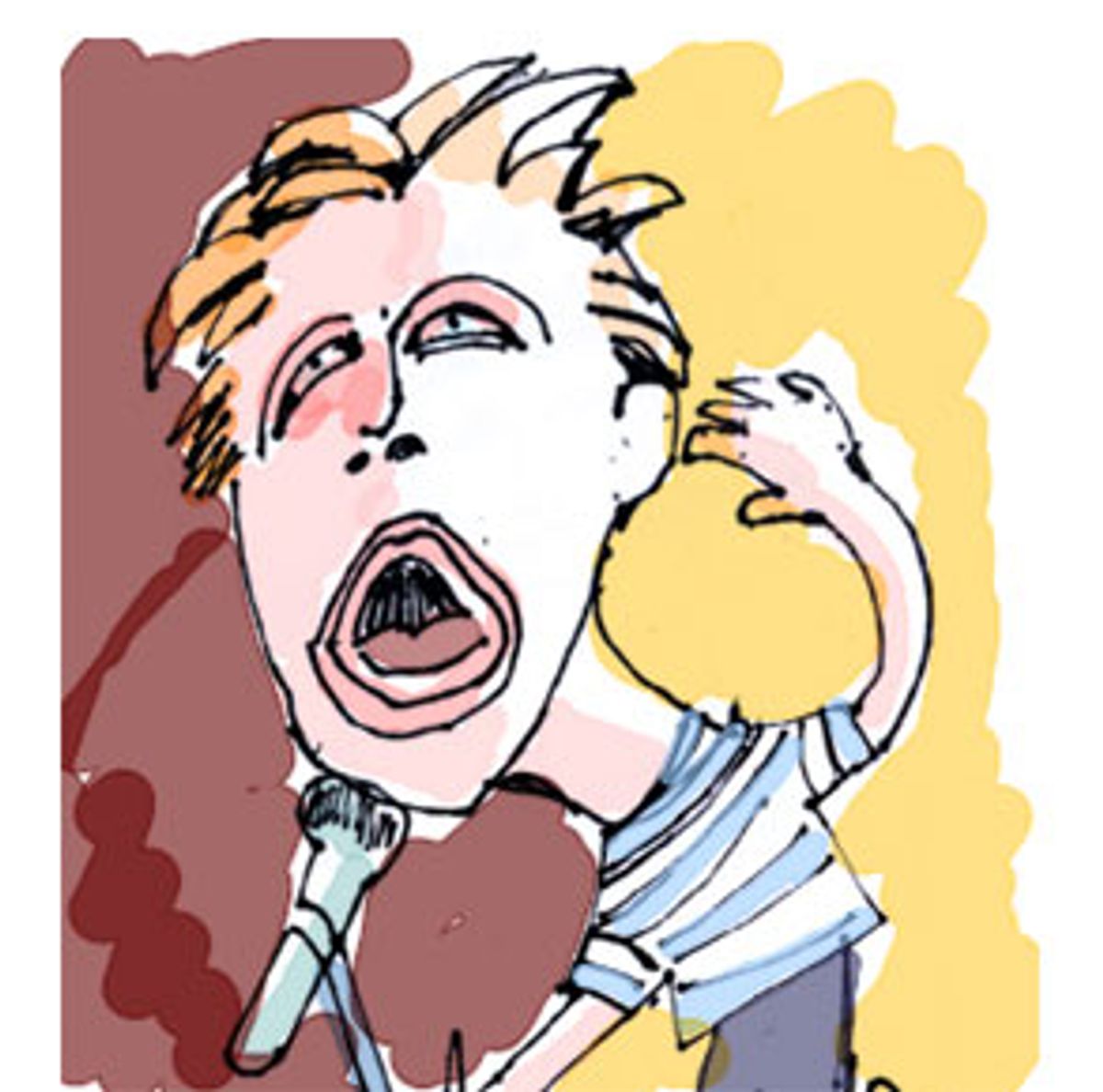 Adam Epstein is hoping to do for sports fans what Napster did, however briefly, for music fans: open up their world, decentralize it, democratize it, break the monopoly.

Epstein is a 27-year-old New York lawyer who's behind FanCast.com, a site where anyone with a microphone and an Internet connection can become a sportscaster or a talk show host. If you have a TV tuned to a ballgame, you can do play-by-play, and folks can hear you -- and, if you'd like, interact with you -- through the Web site.

The idea is to overthrow what Epstein calls the "one size fits all" sportscasting regime, where everybody who wants to watch, say, the big Michigan-Notre Dame game has to listen to, say, Brent Musburger.

So here's what you're thinking: You're thinking, "Any rebroadcast, reproduction or retransmission of the pictures, descriptions and accounts of this game without express written consent ..." You're thinking FanCast is in for a world of hurt in the courtroom, just like Napster has been.

"Obviously that was the first thing I looked at before I invested my entire life savings and that of my family into this venture," says Epstein, who walked away from the legal profession to found FanCast in September, when a one-year clerkship to a federal judge in Kalamazoo, Mich., ended. "I just treated it as a case that came in front of the judge, looked at the law on the issue, and I found out that the law lets sports fans watching a game on TV discuss what they're watching with other sports fans. That's the First Amendment right: Once they choose to broadcast something into your home, you can talk about it."

In other words, legally, FanCast ain't Napster. "I think culturally it's extremely similar," he says. "It is peer to peer, it is an industry that's used to having complete distribution of its content, sports is, and that's now being threatened. But legally it's different because we're not simply redistributing their content. We're generating our own."

Epstein says he hasn't heard any threatening noises from the networks or leagues -- "not even a Christmas card" -- and is confident of the merits of his case if they do get litigious, which he isn't anticipating. "They'd be suing sports fans," he says. "I'm a sports fan working out of my apartment, and there's other sports fans talking about sports, and I think it doesn't make a lot of public relations sense for them to be suing their own fans. But these are the guys who canceled the World Series, so you can't always attribute rational thought to them."

Epstein cites a 1997 case, NBA vs. Motorola, in which the basketball league sued over Motorola transmitting real-time scores and stats, gleaned from television and radio broadcasts, to pagers. The NBA initially won a permanent injunction banning the practice, but Motorola prevailed on appeal.

Epstein, a graduate of Columbia University and the University of Michigan law school, grew up in Berkeley, Calif., with his dad, "a counterculture type, but a big sports fan," and it was watching sports with pop that planted the seeds of FanCast in young Adam's mind.

As he got older, Epstein found himself less and less interested in the sportscaster, whoever it was. "I'd gotten to the point where I pretty much always muted the television, and I'd be watching with college buddies or law school buddies, or whoever it was, and they were always more interesting than the guys on TV," he says. "So when I was out in Kalamazoo living by myself, I was watching all these sports on television, and I was sort of subjected to the guys on TV, and I was like, 'OK, this is ridiculous. Normal sports fans are more interesting than the guys on TV, whether it's my friends, who aren't even all that funny or interesting, or the people at the ballgames who are yelling things out, or people in the barbershop who are talking."

Back in New York, he watched games with his friends again, "and I was like, 'God, what I missed about watching sports was you guys kind of riffing.' I'd much rather hear my contemporaries talking about a game than the guys on TV."

Epstein figured that in the era of the Internet there must be some kind of technology that would allow for live, real-time broadcasting on the Web from a PC, so rather than returning to his job at a Midtown law firm he began the process of starting FanCast. He quickly learned that no such technology existed.

He wanted to hear "an Intel guy speak about streaming media," but a conference official told him he'd have to pony up $1,000 or leave. Epstein struck a deal: He could stay if he tore down the audiovisual gear after the lecture. When he was through with that work, he approached the speaker, who was just finishing up with individual questions from audience members.

Epstein approached Wonderhorse, which was founded by Microsoft refugees. "They thought it was a great use of the technology, so I'm marketing it, they're doing the tech stuff and we went live about a month ago."

So let's listen in on a broadcast.

[Sounds of dead air, interrupted only by the sound of someone in the background talking on the phone, followed by hideous crackling noises.]

All right, we're still testing our audio here ... We'll try to make some assessment of whether [our on-site reporter] should speak straight into the mike or I should relay the information.

OK! So it's a work in progress.

"I don't think we're there yet," Epstein says of the artistic quality and production values of the broadcasts, but he says he's unconcerned. "Right now it's free for them to broadcast and they're not getting paid, so it's totally wide open, and that's how I want it to be at the beginning."

"Fabulous Dan" Marino does a talk show on FanCast three times a week. Marino was an on-air personality on a Bay Area sports radio station for several years, and his show sounds a bit more professional. He says there is some good stuff happening on the month-old site.

"There are certain guys who are on the air, and these guys do a really surprisingly good job considering that they've never done this before," Marino says. He cites broadcasters known as Commish Bo, Little Johnson, Mark Harmon, Jay Christopher and the A Train. "Jim Saggese has a group of strange relatives that call him up during the games. He has an entire group of people that call and drive him insane. They won't let him do the game. It's funny as hell."

I ask Marino if he plans to use FanCast to launch himself back into the world of radio. He jokes that the TV networks will soon come begging for him, then says: "To be honest with you, it gives me an opportunity to talk sports radio, and that's good enough. I'm 48 years old. I'm the vice president of a purse company. I have a real job. And if I get to do this and enjoy myself and drive people crazy and tell people in New York that Roger Clemens is a coward girly-boy because he won't stand up to the plate and let one of these Met pitchers drill him in the head -- isn't that fun? That's the whole point."

He says that when he does his show he might get 100 listeners and he might get two, and that it's nothing like his old radio gig. "It's a completely different attitude," he says. "This is like you're talking to a group of friends."

Which was Epstein's original idea, wasn't it?

He says he's not looking to overthrow the existing broadcasting business completely. Even if FanCast succeeds, Brent Musburger still ought to be able to make a living.

"I think the one-size-fits-all solution works for a lot of people," Epstein says. "I mean, my grandmother, or whoever else, I think appreciates a certain type of sportscaster that's on television, but I'm not sure that sportscaster works for everybody. And my vision, or my dream, is that as the Internet and television converge, you'll have a menu of different sportscasters."

Did someone say "succeed"? What's the business plan here?

"First I should say: It's unclear," Epstein admits. "There's no revenue coming in, obviously, at this point. But my thinking going into this was that we'd charge broadcasters who want to do this on a vanity basis -- who just want to broadcast to their friends and family, less than 20 listeners -- we'd charge them a small fee, maybe five bucks a game or 50 bucks a month or whatever it turns out to be. [With] those who are getting over 20 listeners, or those who are drawing an audience -- we'll hopefully have some of those people -- obviously you get into targeted interactive audio ads."

Epstein says that as of the middle of last week he'd spent about $50,000 ("the burn rate's low -- I'm working out of my apartment"), and that he has some investors lined up if he hits certain benchmarks, which he says he's close to hitting. So far, FanCast has signed up about 150 broadcasters, about 40 of whom do shows regularly, for a total of about eight shows a day, with a growth rate of about 100 percent every two weeks.

"I think the people who will be the most successful, or who start drawing big audiences, will be those who are targeting certain niches," Epstein says, "whether it's statistics-focused analysis or talking about old-timers or a woman's perspective or people who are new to the sport or different ethnic minorities. Maybe it's just that a bunch of stoned college kids will be more interesting to stoned college kids than Bill Walton is, though I guess he was once a stoned college kid himself. The idea is that the narrowcasting that's going on in other media would happen in sportscasting as well."

It's hard to imagine the sports leagues and television networks not fighting FanCast if it looks like it's getting off the ground. After all, the networks and local stations are very invested in having you listen to their announcers, who between plays are talking about their sponsors. And besides, the entertainment industry has a long history of fighting anything that it sees as competition, even though one could argue that most of those things -- television, cassette tapes, videocassettes -- end up making it even richer. (The jury's still out on Napster.)

There's no doubt that Epstein wants to make money with FanCast -- he's looking forward to a formal relaunch in the fall, because he says football, with its huge audience, less frequent games and deep fan passions, is perfectly suited for what FanCast does -- but he seems to be most excited about the cultural implications of giving sports audiences a choice, which might lower television rights fees and advertising rates for the networks and leagues. "I mean, what if you took the money out of sports?" he says. "Not all of it, but a lot of it. Maybe this 20-year ride they've had of monopolization, based on their complete control of the distribution of their content, ends.

"I think it is easy to dismiss us and say, 'OK, this is never going to work. These guys are amateurish.' And yeah, I'm a guy in my apartment. I don't have venture capital. It's the easiest thing in the world to sort of write off at this point. And maybe FanCast won't make it. Maybe FanCast is not the iteration that's going to be successful, but something is going to shake up what's going on in the sports media. We're onto something here."