The death of the Boogie Man 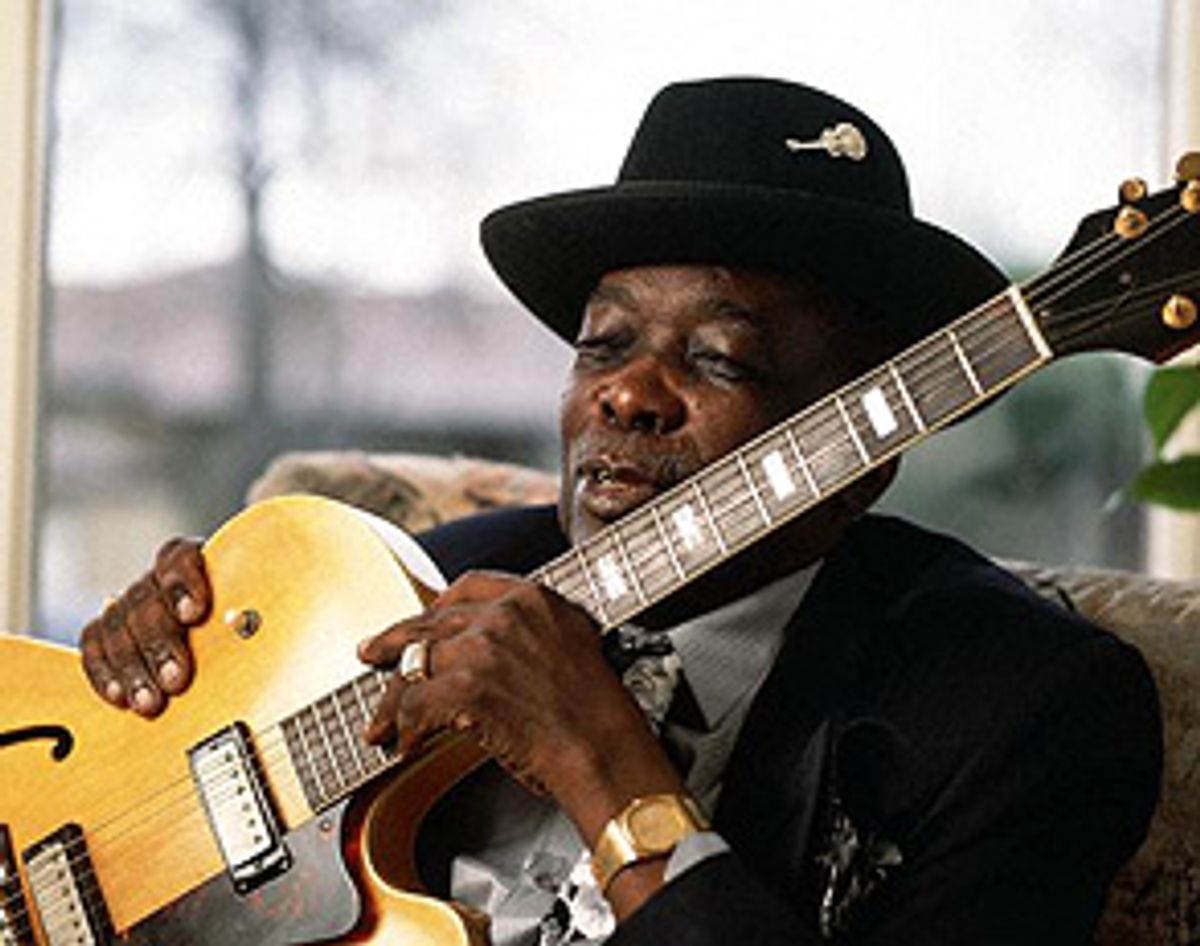 John Lee Hooker died peacefully in his sleep on June 21, 2001, two months and one day short of what would have been his 84th birthday. He died at his current home in Los Altos, Calif.; surrounded by friends and family, with money in the bank; loved and admired by millions of people all around the world. In Western astrological terms he was a Leo; according to Chinese astrology, he was born in a Year of the Snake. A Leo Snake, no less: Small wonder that one of his signature songs was "Crawlin' King Snake." His passing coincided with an eclipse: Its optimum viewing point was in Africa. Make of that what you will.

His recording career spanned a full half-century: something he marked by spiking his album "The Best of Friends," which might otherwise have been a routine best-of, with a sizzling remake of his first hit, featuring a phoned-in lead guitar overdub by Eric Clapton that sounded like they were eye-to-eye in the studio. Just as it did when he teamed up with Miles Davis for the soundtrack to Dennis Hopper's "The Hot Spot": Miles overdubbed as well, but it still sounded as if they were in total telepathic contact. On the rideout to that 50th anniversary remake of "Boogie Chillen," John Lee claimed his heritage and stated his identity. "I am," he proudly announced, "the Boogie Man." And he was, like no one before him ever was and no one following in his footsteps ever could be.

I won't trouble you with the blow-by-blow account of his career: that half-century cycle of upturns and downtowns, from Mississippi to Detroit to San Francisco, which started with the million-selling "Boogie Chillen" in 1948 and ended with a wallful of gold and platinum albums and Hooker established as the absolute iconic essence of the African-American art form to which his entire life was dedicated. Without ever making any significant modifications to who he was and what he did, he contrived to be a part of the Electric Downhome Blues movement of the late '40s and early '50s; the rhythm and blues scene of the mid-to-late '50s; the folk-blues revival of the late '50s and early '60s; and a primary inspiration to the white-blues guys of the mid-to-late '60s and beyond.

The central paradox of John Lee Hooker -- apart from the fact that he was a deeply modest man who was well aware that he was a genius -- was that he was simultaneously the grand archetype of the Mississippi bluesman (despite having left Mississippi when he was 14), and utterly unlike any other major Mississippi bluesman of his generation. His songs rarely rhymed, his rhythms were unstructured and freeform, and only a very few of his lyrics looked like anything much if you saw them transcribed on a page.

He communicated everything through the sound of his voice and his guitar; and he had an unparalleled command of emotional nuance. On that "Hot Spot" soundtrack, he barely sings a lyric at all. There are only fragments: "So sad," or "It ain't right." Everything else is simply Hooker humming or moaning, yet he communicates more than most other singers could do with an entire notebook full of lyrics. The instant you hear him, you know that he understands stuff about your life that you may not even understand yourself.

That's John Lee Hooker the artist. Now let me tell you about the human being I met, and hung out with, during the years in which I worked on his biography. The man beneath the hat and behind the shades was far from the forbidding presence he could sometimes seem to be when viewed through a lens. The John Lee I knew loved food and laughter and company: specifically the company of friends and of peers, and the company of women. His home was never empty, though sometimes the stress of an open-door policy overcame him and he would camp out in his bedroom until certain uninvited or overly excitable guests had been induced to leave.

Conducting the 10 or so hours of interviews that made up the spine of the biography was the work of many weeks, spread over many years. I'd hang at his home on a daily basis for weeks on end, sometimes catching a few minutes' conversation: On one halcyon day, he actually talked for 45 minutes at a stretch. Eventually he got so accustomed to the presence of a Boswell that he would doze off on his sofa during interviews. When that happened, I'd simply slip into the back garden for a cigarette, and wait for the phone to ring. Once he'd gotten through answering it, I'd slide back onto the sofa, switch the Sony back on, and we'd talk some more. And there was always delicious home-cooked Southern cuisine on the stove or ready to be microwaved, and always wine or light beer (though John Lee endorsed Martell cognac, he hadn't touched hard liquor in many years), and always company, and always laughter.

His amp was always parked in a corner ready to be hoisted into the trunk of one of his many cars, but unless there was work to be done -- a performance, or preparation for a recording session -- his guitars stayed stashed in the closet. Once I asked him if he ever pulled out one of his many guitars and played the blues purely for his own satisfaction. He looked at me incredulously. "You fuckin' crazy?"

Then I remembered his celebrated exchange on David Letterman's TV show back in 1989, when "The Healer" was fresh in the shops and the staggering final revival of his career was just beginning. Interviewing him, Letterman commented on the two brooches John Lee wore on his hat and in his lapel: a star, and a dollar sign. John Lee explained them thisaway: "I'm a star. And I plays for money."

Ten years ago, in one of our earliest conversations, he said to me, "When I die, they'll bury the blues with me. But the blues will never die." It was a favorite line of his, and he probably said it to many people, but I never forgot it. I never will forget it. Or him. Neither will anyone else who ever met him, or anyone whom his music helped get through those long nights in the dark room.

Take it easy, John. And -- to revitalize a cliché -- rest in peace. You, above and beyond almost everybody I've known in my life, you deserve it. Oh, yeah. Mm-hm.

Charles Shaar Murray is the author of "Boogie Man: The Adventures of John Lee Hooker in the American Twentieth Century" and other books about rock 'n' roll and the blues. He lives in England.