As our sagging Internet company invented euphemisms for failure, Alice and I took refuge in instant messaging. She had a boyfriend but we couldn't stop. 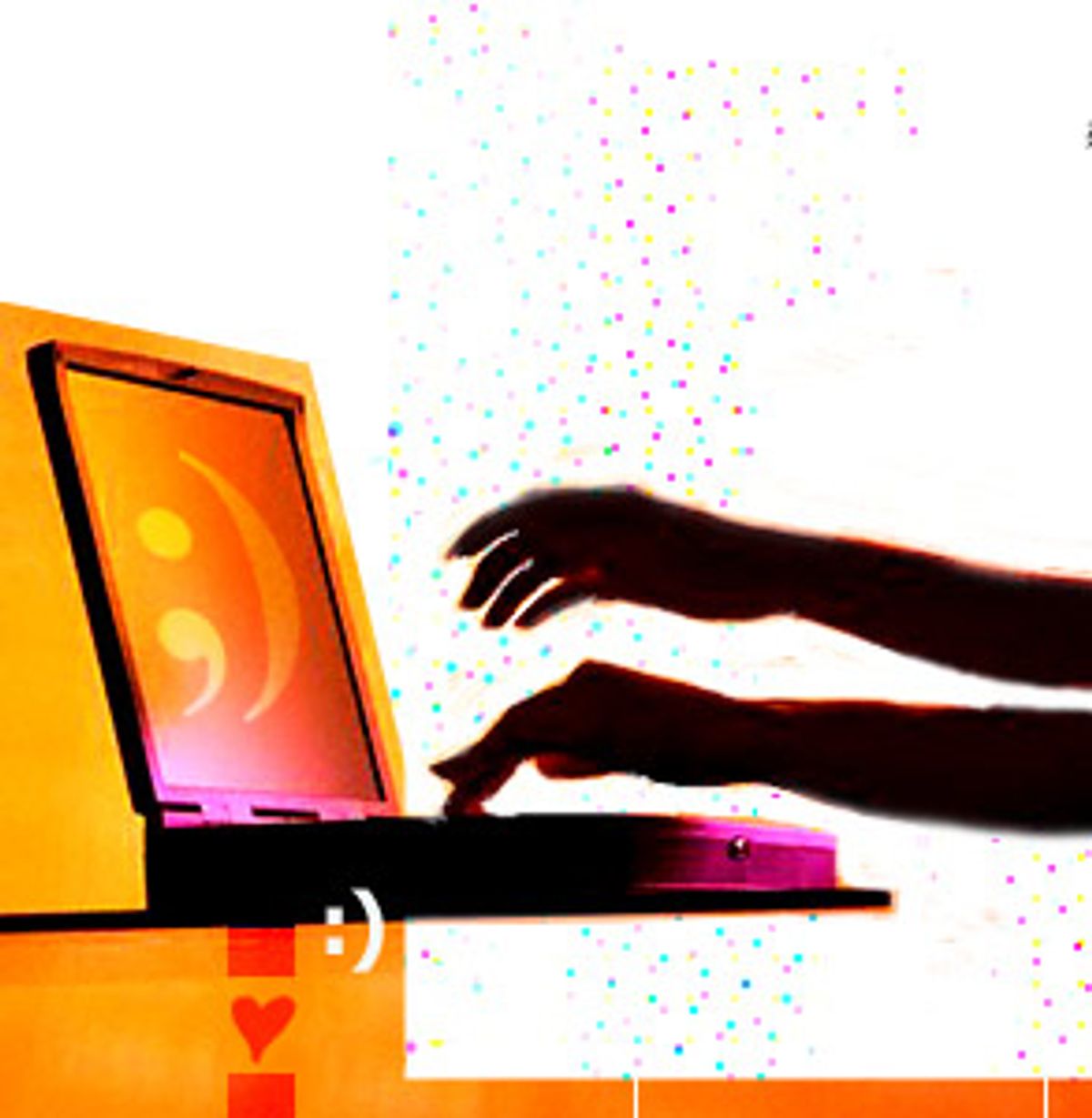 A year ago, instant messaging was still a fairly recent marvel. According to an article in the Industry Standard, there were 60 million instant messaging users registered worldwide. The technology had been introduced less than three years prior, making IM the fastest growing communication channel of all time.

I was, by nature, moving a bit slower. Each morning, at a public relations agency hyping Internet start-ups and video game companies, I dumped nearly 100 e-mails into my in box and each evening outlasted northbound congestion snowboarding on a yet-to-be-released PlayStation 2. Numbers everywhere were in the superlatives.

IM allows people to talk live with one another through lines of text on a screen, like a conversation in subtitles. Our office equipped each of us with IM programs in late spring. I called myself Halcyon992, immature but excusable as new economy.

I began seeing Alice around the same time. She worked three cubes over. She had gray eyes and was kind to everyone she met. She also had someone else in her life. And from the beginning, I pictured the end of us, breaking up in a parking lot after a helpless, cinematic kiss goodbye, or else me, sacrificing my job in the name of everything else.

We were encouraged to use IM often, as it was a fast and easy way to get in touch with clients. Our V.P., Jackie, used it most among the 12 of us in the office, silently communicating with people who were sitting within conversational earshot.

Jackier: going downstairs to grab a bite. want anything?
Halcyon992: no, but thanks anyway
Jackier: k :)

We created a noiseless firestorm of IM flashes. Exchanges were splintered, with multiple conversations blinking back and forth at once. Someone would click the wrong IM handle and the message was slipped into the wrong hands. But the only words I worried about were those I wrote for Alice.

Alice and I had driven to the beach one night, leaving a trade show party where Kiss had been hired to play, and sat down together in the sand, having been on our feet all day. With the San Francisco glow safely off in the hills, we moved in closer to each other and stayed from 1 a.m. until the white sunrise.

At the office the next morning, we stared at our computer screens to keep from laughing and a magnetic pull began to grow within the wires connecting us. Endless ribbons of dialogue unfolded from there. I reported to work each day for conversations with a blazing Roman candle.

I waited weeks for a reminder that this had to stop. I was the other guy and didn't even know her middle name. This fling would run its course for her and I would be flung. You can't keep it up, friends said. But during the day, meetings or phone calls incessantly preempted this discussion. When we could, we would talk through them.

When the session box clicked closed, the text disappeared completely and forever. We'd start over.

AbsenceofAlice: sorry i was acting weird earlier today
Halcyon992: me too

Summer arrived early. Jackie announced that two clients were cutting P.R. She used the word "sunsetting." Their venture capital money had dried up, she said. No need for an aggressive press strategy when all the news was turning bad.

She was having trouble sleeping. I developed a habit of double-checking the receiver of each message I sent. Alice and I both ate only Cheetos for lunch, sometimes splitting a bag from the snack tray and flopping onto the inflatable furniture in our media room. We'd try not to touch hands while we watched CNNfn, formulating reasons why the show didn't feature our single remaining client's CEO.

Still, the Internet advanced. Forty-five million people had their hard drives chewed through by an e-mail bug named I Love You. A couple met and legally married online as their fantasy role-playing game characters. A Palestinian woman disguised her identity in a chat room and lured a Jewish teenager from Tel Aviv, Israel, to his death in the desert. Generations began to evolve with tinier fingers and wider rear ends.

Alice and I might exist in another blip on the digital landscape, one with the usual binary rhythm of one and twos, and we'd be saved. But never on this one, with the looming third party. I would have to give my two weeks' notice to Jackie.

I would, it was clear, need a few days to rehearse my quitting.

The PowerPoint slides started to pulsate by 9:30. I took a break to draft a resignation letter and a long e-mail to Alice. I left the office when I discovered I didn't know which one I was writing.

On a cold summer night after a colder summer day, I was taking the highway loops home at 90 miles an hour. But I didn't need to keep moving this fast, driving toward a fiery crash I assumed inevitable. If I could suspend my doubt long enough, I might stay to witness the things I expected to disintegrate, in fact, last.

In the coming months, in places like Wall Street, Redmond, Wash., and the Disneyland business theme village known as San Jose, they suffered the crisis of returning to normalcy. Many jobs and many mutual funds vanished. Others renewed themselves each morning.

I didn't leave my job for a long time. Until then, I began new conversations.

Nathaniel Missildine is a writer living in San Francisco. His AOL Instant Messenger name is nmdine.