Pushovers of the press

The media elite are reviewing Henry Kissinger's latest tome with their usual fawning gullibility. Best not to mention those bony hands reaching out from the grave. 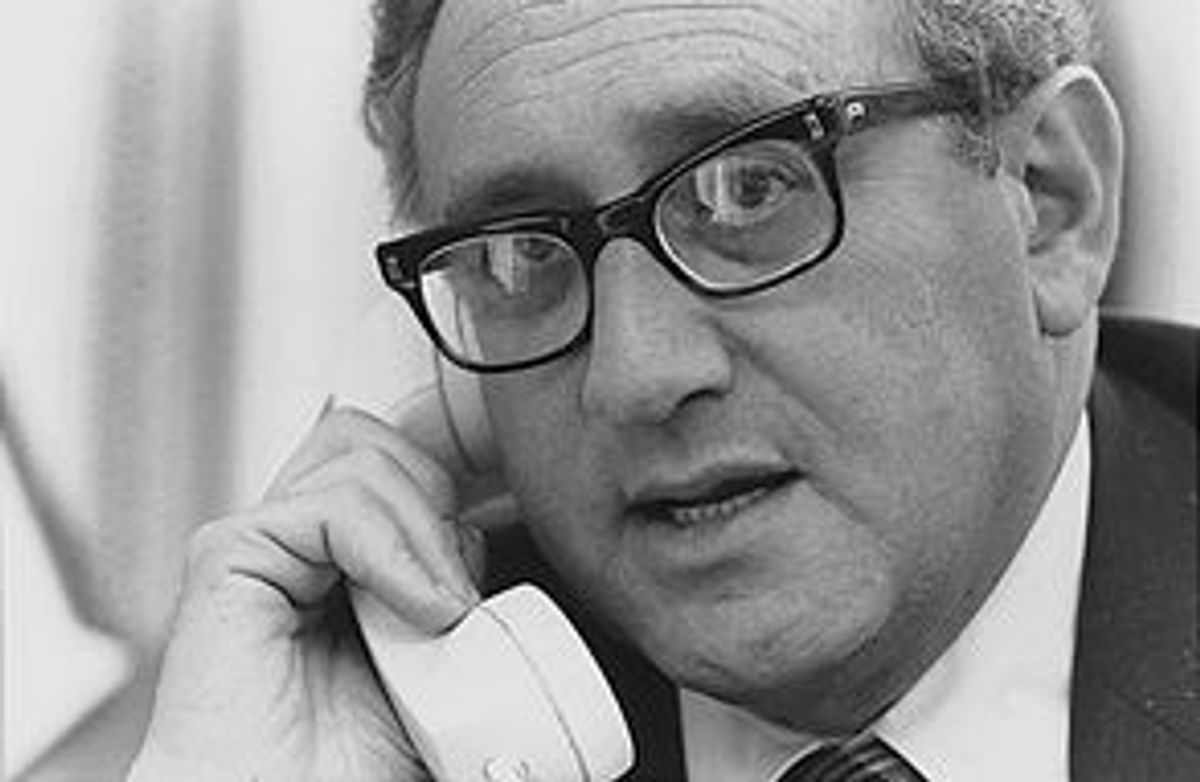 If you're a college professor who tells students that you saw combat in Vietnam when you were actually teaching history at West Point, your lie will land on the front page of the New York Times and provide debate fodder in the letters columns, on National Public Radio and wherever else serious people reason together. On the other hand, if you're a serial liar who claims to have brought peace to Vietnam while presiding over pointless deaths in the hundreds of thousands (more than 22,000 Americans, the rest Vietnamese, Laotians and Cambodians), you'll never dine alone or lack for honors; you'll be lionized by Ted Koppel and your book of International Studies 101 pieties will be treated as "an intellectual event ... that is also a tour de force" (Walter Russell Mead in the Washington Post).

But then, Henry Kissinger has more lives than any Laotian peasant or Chilean socialist who happened to stand in the way of his designs during the years when he administered American foreign policy with B-52s and coup plans. Having sequestered his official papers at the Library of Congress for 50 -- that's 50 -- years and published well-received memoirs that cannot easily be corrected precisely because that valuable evidence is locked away in a vault, he now steps forward with an unsurprisingly self-serving book, "Does America Need a Foreign Policy?" -- one with the obviously intended answer: yes, and guess whose? Having supervised an apparently badly needed foreign policy for Richard Nixon and Gerald Ford, Kissinger now capitalizes on his self-perpetuating repute to duck any question that might cast doubt upon the worthiness of the tough-guy realism he not only fancies but personifies.

Mainly he gets away with it. He got away with it in 1971 when refusing to say whether the Nixon administration had made any estimates of Indochinese casualties (an episode related in Tom Wells' new biography of Daniel Ellsberg, "Wild Man"), and he still gets away with it. For more than 30 years now, when the American press comes around Henry Kissinger -- that's Dr. Kissinger to you -- a giant sucking sound can be heard. While Robert S. McNamara was mauled (by this writer, among others) for his disingenuous and insufficient Vietnam apology, Kissinger is steadfastly unrepentant -- he sneers at apologies, in fact -- and weaves his way from talk show to talk show unscathed. He scorns Clinton for making post-Cold War apologies and congratulates Nixon for "negotiated extrication from Vietnam" while preserving a reputation for straightforward talk. He chides our Vietnam-era NATO allies for holding themselves "aloof" from America's war, and no one ever tells him that this is hardly the right word for the strong opposition that came forth from, among others, Charles de Gaulle (the subject of some of McNamara's most interesting pages).

From Kissinger, gravitas and a gravely voice are mistaken for wisdom. His clichis, when issued in suitably ex cathedra tones, strike journalists as profundities. The ostensible literary critic Norman Podhoretz once raved about Kissinger's prose style, and now even the liberal columnist Richard Cohen, writing in the Washington Post, calls him a good writer. But in the current book, barely a page passes without some inept, ungrammatical or fatuous formulation -- a subliterary phenomenon unremarked upon by any reviewer I've read. I open four of Kissinger's pages at random and find these contortions, confusions and clichis:

The Cold War strategies sought to manage the conflict of the nuclear superpowers by the policy of containment of the Soviet Union.

In fact, India's conduct during the Cold War was not so different from that of the United States in its formative decades.

Or is the rush to Tehran an obstacle to a rapprochement which is in itself not in dispute?

The West's relations with Russia have always been laced with ambivalence.

If Kissinger passes over a subject, most of his reviewers have no objection. About Angola, Kissinger's single reference is as follows: "The civil war in Angola has lasted for thirty-eight years." As if eight of those years were not on his watch, when the U.S. backed the anti-Russian side (which is still at war) strictly because it was anti-Russian. By contrast, Warren Cohen of the University of Maryland at Baltimore County, writing in the Los Angeles Times Book Review, distinguishes himself from other reviewers by noting that Kissinger's tendentious account of Chile in the years between 1970 and 1973 omits mention of the kidnap and murder of Chilean chief of staff Rene Schneider in 1970, a move that opened the way for Pinochet's coup against Allende.

In his current, largely unreviewed book, "The Trial of Henry Kissinger," Christopher Hitchens is particularly convincing when he marshals evidence that Kissinger, who chaired the top covert action committee in Washington, was brain-deep in the planning of this grave offense to democratic government. He cites (as Kissinger does not) Kissinger's declassified memorandum of his 1976 conversation with Pinochet, in which, by his own account, Kissinger said to the dictator: "My evaluation is that you are a victim of all left-wing groups around the world and that your greatest sin was that you overthrew a government that was going Communist."

In his own book, Kissinger takes time from his general theory of foreign policy to congratulate Pinochet for his economics and to commiserate with him on his long-delayed arrest for human rights abuses in Britain in 1998. In an inadvertently comic observation, Kissinger declares that he himself ought to know what human rights agreements are for, having himself been their virtual founding father when he worked up the Helsinki Accord of 1975. So he knows that human rights initiatives were intended as "primarily a diplomatic weapon to use against Soviet pressure on their own and captive peoples, not as a legal weapon against individual leaders before courts of countries not their own." Beware the reckless gall, the soft-headedness of a Spanish judge or a tribunal in The Hague taking literally a treaty's words about human rights -- taking them at face value as a universal commitment!

Thus does Kissinger now oppose the trials of torturers and war criminals outside their homelands, insisting (in his book and in a Foreign Affairs article drawn from it) that "we must not allow legal principles to be used as weapons to settle political scores." The globe-roaming Kissinger puffs himself up with a pose of high-mindedness in defense of national sovereignty. His own self-interest in stopping such trials fairly screams between the lines. On May 28, after all, he was issued a subpoena by a French judge interested in his testimony as to the disappearance of five French citizens in Chile under Pinochet -- a subpoena on which he turned his back. As Barbara Crossette recently wrote in the New York Times, "The arm of the law is growing longer and the world smaller for national leaders and others accused of atrocities." Indeed. Which is precisely Kissinger's concern.

No surprise, Kissinger cavalierly identifies his own safety with that of the state. Yet Mead, who ought to know better, is so enamored of Kissinger's exercise in self-exculpation that all he can say in objection to Kissinger's coverup on Chile is that "the behavior of the Chilean military and U.S. complicity with it during Pinochet's seizure of power marked one of the less edifying moments in the long Cold War." Edifying! Other adjectives come to mind -- defensible, honorable, decent and perhaps (as Hitchens suggests) legal.

Mead lauds this Kissinger quote, "A deliberate quest for hegemony is the surest way to destroy the values that made the United States great," as "some of the most eloquent and important words ever to issue from his pen." Possibly Mead means this as a backhanded compliment, though I doubt it. Political journalism is in desperate condition when a sentence like this rings the eloquence gong.

In the New York Times Book Review, Thomas Friedman a bit more judiciously credits Kissinger for, when considering intervention, "emphasiz[ing] the long causal chains, and what might happen at the end, rather than submit to any immediate emotions," and chides him for underestimating the force of economic globalization. But with vague allusions to the criticisms of "others," Friedman also lets Kissinger off the hook.

In a June 21 puff piece for the Boston Globe, a story in which Kissinger performs his avuncular act for 34 paragraphs, Mark Feeney finds room for four critical ones, but the criticisms consist of the usual banalities about the "dark side" of his career, his "role in the secret bombing of Cambodia, the overthrow of the Socialist government of Chilean President Salvador Allende, and the wiretapping of journalists and subordinates." On none of these "events was he then -- or is he now -- notably forthcoming," Feeney writes.

Any of Feeney's readers who is not familiar with that "role" will surely learn no more about it from this story. This is, after all, a gushing profile, like hundreds of others Kissinger has garnered in his career, lazily skimming the surface, alluding to "criticism" without citing or evaluating it, presupposing that the reader should not be troubled with messy fact. Even the Globe's sidebar on Hitchens' short book offers phrases but no particulars. If you want truth, damn it, reader, get thee to the library, but don't expect to find facts in what is after all only a newspaper.

So it goes in the halls of journalism. Kissinger has the herd cowed.