"Kiss of the Dragon"

Jet Li is wasted in a clumsy Hong Kong-style actioner, a movie scored to the sound of breaking bones. 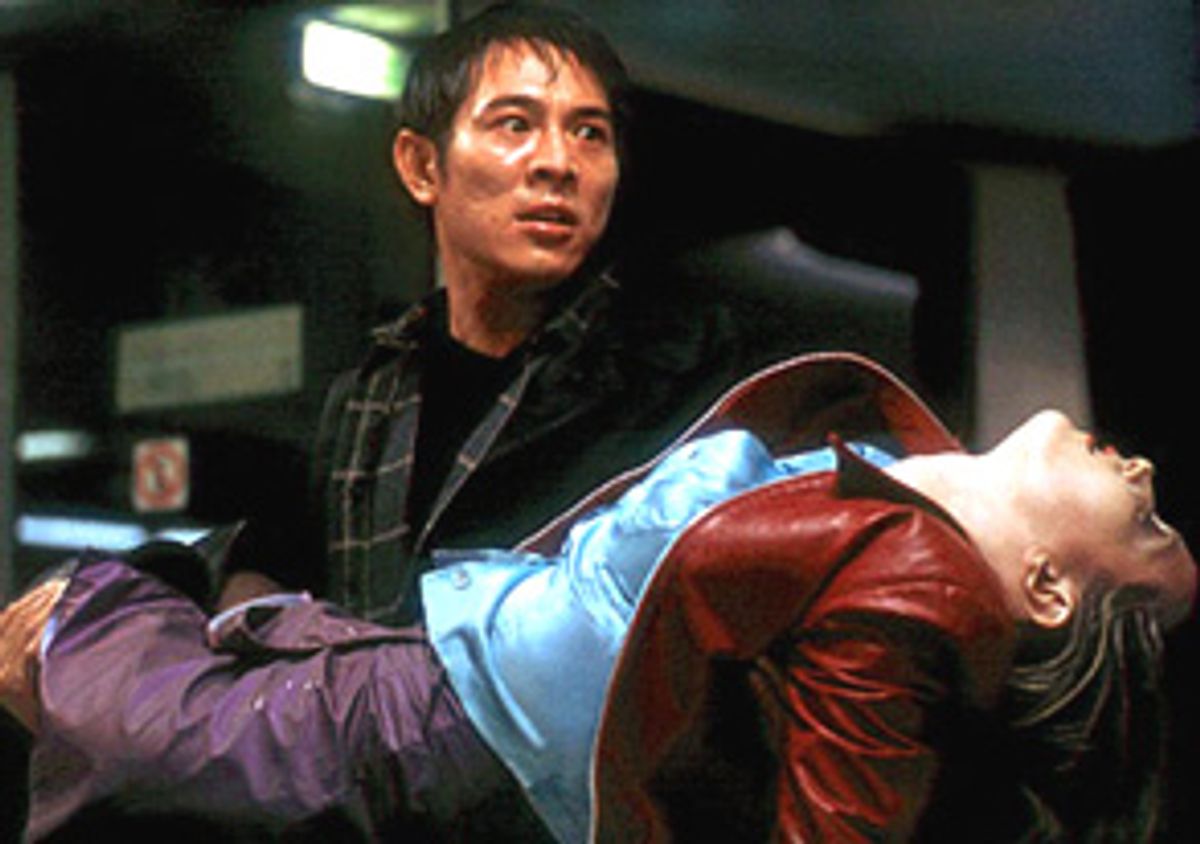 As Claudette Colbert said of Rudy Vallee in "The Palm Beach Story," Jet Li has a nice little voice. He isn't dubbed in "Kiss of the Dragon," but he's so removed from the proceedings that he might as well be. Li's first bits of dialogue are so clipped and remote that you could be forgiven if your mind drifted back to those Italian Hercules epics that featured dubbed American voices emerging from a swath of dead air.

I've seen Li only in the first "Once Upon a Time in China," and that was some time back. Can he really be as unexciting as he comes off here? I'm hesitant to lay it all on him; the director, Chris Nahon, making his feature debut, clumsily films most of the action in medium shots, which prevent us from seeing Li's whole body in motion. And though Nahon has a penchant for violence, he doesn't have a flair for it. In "Kiss of the Dragon," Li is a distanced, rather joyless figure. His moves are fast and brutally efficient but without any concomitant grace. Part of the joy of watching Jackie Chan is that he's an instinctive clown; his face always registers amazement when one of his moves actually works against the bad guys. And Bruce Lee, the apotheosis of all martial-arts movie stars, has a lean, mean fire in his eyes that added to the impact of his kicks and punches.

Li certainly cuts a sleek figure in his invariably all-black (Jet-black?) outfits, and his face, chiseled and yet a little unformed at the same time, isn't a bad camera subject. But in "Kiss of the Dragon" he gives off neither wit nor sadistic relish. He's the fastest moving stiff I've ever seen.

The plot of "Kiss of the Dragon" (as if anyone will go to it for a plot) has to do with a Chinese agent (Li) heading to France to assist the Parisian police in busting a Chinese heroin smuggler. He doesn't know that Richard (Tchéky Karyo), the cop in charge of the operation, is using his office as a cover for his shadow life as a crime boss. Moving to take over the heroin smuggler's business, Richard engineers the guy's murder and frames Li for it.

The machinations of the rest of the movie have to do with Li trying to clear his name and get out of Paris, though it must be said he doesn't seem particularly eager to accomplish much beyond sitting in his safe house, eating dumplings and those great spongy shrimp chips you get in Chinese restaurants. Almost as an afterthought, Bridget Fonda enters the movie as a prostitute working for Richard, who got her addicted to heroin and then stole her daughter to make sure she stays under his thumb. It's a crummy, thankless role, but even when she has to service the dumb script, as in the scene where she squats down to pee in a shop doorway, Fonda, as always, works in a recognizable human range.

Is there a better unsung actress in the movies? I have seen Bridget Fonda in more bad movies than good ones (though the latter, including "Shag," "A Simple Plan," "Rough Magic" and "Monkeybone," is far from a negligible bunch) and I have never seen her give a bad performance. She has a quality that might be defined as melting canniness. She seems completely open and yet completely wised up to what's going on at the same time. Here, disheveled and in streetwalker drag, stuck with the third-rate melodramatics of the repentant hooker/yearning mom role, Fonda still somehow seems like a real person. Even the color of her eyes seems keyed in to the character's desperation: Her usual sparkling green peepers here have the cloudiness of dulled jade.

Tchéky Karyo doesn't even get to seem human. As the movie's chief baddie, he's shot most of the time in glowering close-up. And he's too dapper a man to sport the silly little goatee stubble he's got here. Karyo has always been a foolproof actor (foolproof being defined here as someone who could be good in "The Patriot") and, in "Addicted to Love" and "Saving Grace," a charming one. It's dispiriting to see him in this generic Euroscum role.

The most dispiriting thing about "Kiss of the Dragon," though, is that it's another example of how Western filmmakers fall on their faces when they try to evoke the feel of Hong Kong action films. Even at their most manipulative and calculated, Hong Kong movies seem to come from a simpler age of movies, perhaps because they haven't been infected by the self-consciousness and condescension that plague Hollywood.

Like the old studio bosses, the people who make them seem to think of movies as movies rather than product or events. I think that's been one of the keys to their acceptance here. Even when they're bad, they feel like they spring from a belief in a movie-fed fantasy world rather than a studio's bottom line. (There's a flash of that spirit in the new exploitation picture "The Fast and the Furious," which happily lifts clichés from an earlier generation of hot-rod movies and which, in the thrilling racing scenes, is one of the only summer movies to show any filmmaking excitement or avidity.)

You could complain that "Kiss of the Dragon" is brutal and sadistic and you wouldn't be wrong. In a fight in a hotel kitchen Li catches one villain's face between two hot irons, and even more than the hip-hop on the soundtrack, the movie seems scored to the symphony of breaking bones. My complaint isn't that the movie is brutal but that, apart from a very few sequences, there's no cleverness or kinetic thrill in the brutality.

Li's devastating punches and kicks should land with the quickness of punch lines to lethal jokes. As Nahon has filmed it, though, they just land with a blunt unimaginativeness. I was making as many mock "That's gotta hurt!" cries as the rest of the audience, but without any real pleasure. The exception is one doozy of a scene where Li is hovering in a laundry chute, a fire raging below him, and he tosses out a hand grenade that lands in a villain's baggy sleeve. That's the kind of comic nastiness the movie could use more of. Or the scene where an assassin hooker goes into her moves to the tune of Mystikal's "Shake Ya Ass."

The cinematographer Thierry Arbogast comes up with a few nice images: Li outlined against a Ferris wheel in a gray Parisian dawn, and a close-up of him and Fonda in a shower of chopsticks as a Chinese chip shop is blown apart by machine-gun fire. The influence of Luc Besson, the producer and co-writer, can be felt in a few shots (like one of Karyo standing on a wide Parisian bridge with traffic whizzing by him) that echo the expansive vistas of his "Léon." (For garbage, "Kiss of the Dragon" is rather handsome-looking.)

Nahon may have been trying for the mixture of sentimentality and brutality of "Léon," but he can't match that movie's undeniable primal pull. And his quotes from other films are just weird. The openings shots suggest, if you can imagine such a thing, what the opening of "The Wild Bunch" would have been like with bunnies instead of kids. And Nahon even makes an ill-advised attempt to ape the transcendent grotesquerie of John Cassavetes' explosive exit in Brian De Palma's "The Fury," a scene that just can't be topped.

If you must see "Kiss of the Dragon," I advise you to try to see it with a large, rowdy audience, like the one at the preview I attended. The wisecracks and yells gave the movie an energy it didn't otherwise have. I didn't see the kid who, when Li is facing two twin Aryan bad guys, yelled out, "Sooky sooky on yo' ass!" but 20th Century Fox should sign him up as a dialogue writer. They could do worse. They already have.