At 15, I was spending entire days inside my locker. Then came the Dale Carnegie Public Speaking Course for Business and Personal Success. 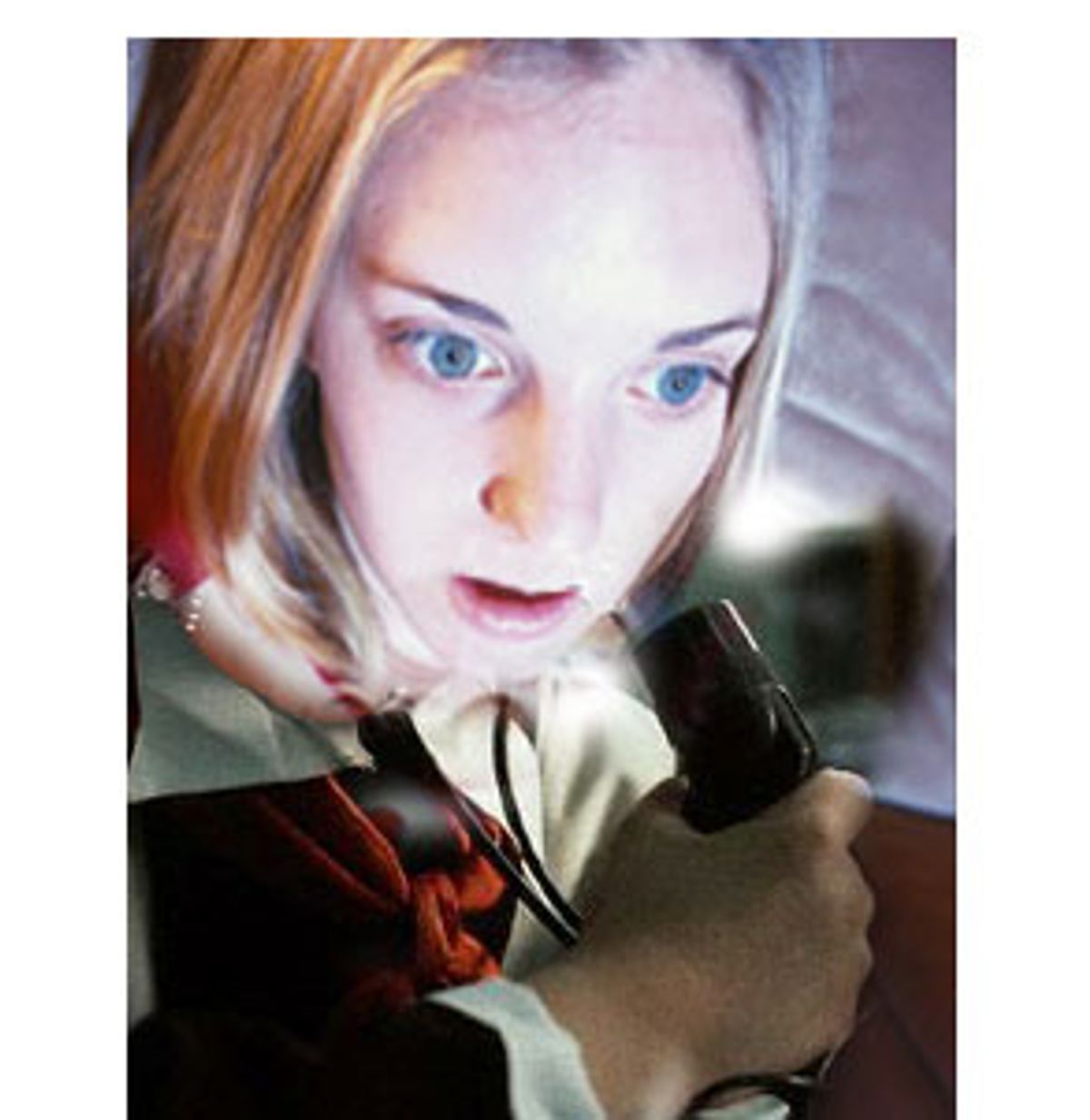 For most of my life, I've had a major problem being the center of attention, unless I personally choose to be. This started about age 15, and happened quickly. I remember it like this: One day I was singing a solo as the star in a school play, and the next day I spent crouched in my locker because someone said "Hi." I was always the teacher's pet, and an A student. However, I was willing to get sent to detention for a really good joke.

I still don't know whether the mutation came around due to hormonal juices, or if my personality was just supposed to develop this way. The onset was so sudden, there wasn't time for analysis. I only knew that I had become this person who wanted to be on the sidelines. I longed to sit back and observe.

This desire didn't just manifest itself cognitively. I developed weird physical symptoms as well. When I needed to perform (being asked a question in class, meeting someone new, giving an oral report) I would blush like a drunk and literally start to shake. It made me scared and angry that people expected me to behave a certain way when I didn't genuinely feel like it. Simply, I hated human eyes on me. Each glance was an invasion, as if they could steal a part of my soul with their pupils.

One evening I asked my mother to let me stay home from school. The next day was picture day.

"I can't smile. I don't want all those people in line waiting to get their picture taken staring at me and seeing if I can do it. Why do I have to smile? My lips start to shake and ..."

Mom was at a loss for words.

Then came the phone calls to my parents from various teachers.

"Well, Lauren just seems to disappear when there's an oral report due. We know she's done the research, because she always turns in a good paper, but, you know, we have to give her an F, because she refuses to stay in class and give her presentation."

I told my parents I was sick. Bathroom sick. Bad. Repeatedly. And that's why I always had to leave class. I said I hadn't told them because I didn't want to worry them.

Time for Dad to nip this in the bud. He had in mind a kindhearted, liberal version of "I'll give you something to cry about." He shuffled me into his truck and we took a little trip "across the tracks." In Ardmore, Okla., across the tracks isn't very different, but there was still a scenic amount of rural decay. Chevys were parked in driveways instead of Fords, and the residents didn't have enough money to hang a cute, duck-festooned "Welcome Friends" windsock on their front porch. As we passed by the drug dealer's house where my friends and I bought pot, Dad said, "Do you know why I'm bringing you out here?"

I figured someone narced on me. Shrug.

He said, "I want you to realize that your problems aren't as big as you think they are. Do you think the people living over here are worried that they won't be able to smile in front of a crowd? Do you think they hide in the bathroom when they have to give an oral report? No, they have to worry about getting a decent meal, or having shoes without holes in them to wear when it snows."

I got what he meant: We were lucky and shouldn't let the trivialities of life block us from the big picture. I needed to step up to the plate, catch the pass, make the touchdown or some other sports analogy.

And of course I had decent shoes. Duh.

Time passed. Corey Feldman rose to fame as the wisecracking Mouth of "The Goonies." I continued the "don't look at me" routine. My grades slipped past "slipping," and Dad's wheels were still spinning. One evening, at dinner, he dropped a pamphlet in front of me and said, "My company's been given a discounted rate for this and I signed you up."

On the cover, a well-oiled smiling asshole in a suit shook hands with another be-suited jerk. If I'd seen "Shaft" at that point I would've said "Oh HEEEELL no!" But since I couldn't find the right words to express my disgust, I was in.

Two weeks later my first Carnegie class began, held in a conference room of a downtown bank. My fellow students entered: thirty-seven 30- to 50-year-old Ardmore businessmen and one woman in her 60s. I kind of stood out, but everyone was nice to me. I think most people are pretty receptive to a busty 15-year-old with spiral-permed blond hair.

Our instructor's name was Judy. She was also very nice; I couldn't complain. She told us we'd be giving a series of speeches that would gradually become longer until we reached our goal: to give a 30-minute speech on the last day of class. We would also learn memorization techniques, and be subjected to esteem-building exercises.

She started us off with a first-day-of-camp staple. We each made up an idiotic nickname for ourselves that rhymed with our actual name and everyone took turns repeating these phrases until they were memorized, thus ensuring we'd learn everyone's name. According to Judy, we were doing this for fun.

"Lauren ... foreign!" Wheee! I was sweating. Once Judy was satisfied with the outcome of this little game, she laid down the rules for the real party.

"OK, I'm going to give you seven minutes to write your first 'talk.' It should be easy, since it's all about you. I want you to pretend you're introducing yourself to an audience. Do it in third person. You're going to want to tell us anything interesting: accomplishments, hobbies, family ..."

I went blank. How freaking queer. Not only was I probably going to choke to death, but assuming through God's own hate that I continued to breathe, I got to pretend that I was in this cheesy fantasyland where I'd be likely to say, "Lauren's not too good with math, but really enjoys getting down to some good ol' rock 'n' roll music." There was absolutely no way I could get out of this, was there? I escaped to the bathroom.

I slumped down and sat on the tile. What if I walked out right now, got in my car (learner's permit) and drove home? I couldn't go home; I'm a terrible liar and my parents would kill me. What if I just ... (sob ... sob ... whine) God! Who cares if I don't like attention? I don't. Why do I have to do this crap? I'm totally fucking happy. I don't care if I have to hide all the time.

I pushed open the door and walked back into class.

Two months later, I was golden. My final half-hour talk was on teen pregnancy and how it was totally bad. Man, I was smooth. Anyone who was previously in favor of teen pregnancy really had some things to think about that night. I was fearless. I took my Dale Carnegie diploma and posed with the rest of my classmates for a victory photo.

In a couple of weeks, I got to put my skills into a real-life situation: oral report in Social Studies class on world atrocities. I had picked euthanasia. No problem. I came out swinging like a double-martini Jerry Stiller at the Friar's Club. "I don't see what's so bad about the youth in Asia ..." Woo! Again I took the "con" side and my points were salient and heartfelt.

The A on that report was the proof. Proof to my Dad, to me, to my friends (actually they didn't give a shit) and to the rest of the jive-ass world that I was not a crazy girl. I was not an introvert and, yes, I would go on to date at least one member of the Ardmore Tigers football team. I could even get on student council. Being a people person was fun, and I was good at it!

Unfortunately, no one could have foreseen the summer break. Yep, that was the summer our little town was able to pick up that alternative-rock FM station from Dallas, Texas. The Edge 94.5. We got it loud and clear and they played the Smiths, Siouxsie and the Banshees and XTC. They had commercials for Amnesty International. They told us to watch "Repo Man."

You know the rest. And stop looking at me.

Lauren Proctor is a writer from Ardmore, Oklahoma.