Flaunting their flaws at a live concert and on "Making the Band," boy group O-Town earn even more squealing fans. 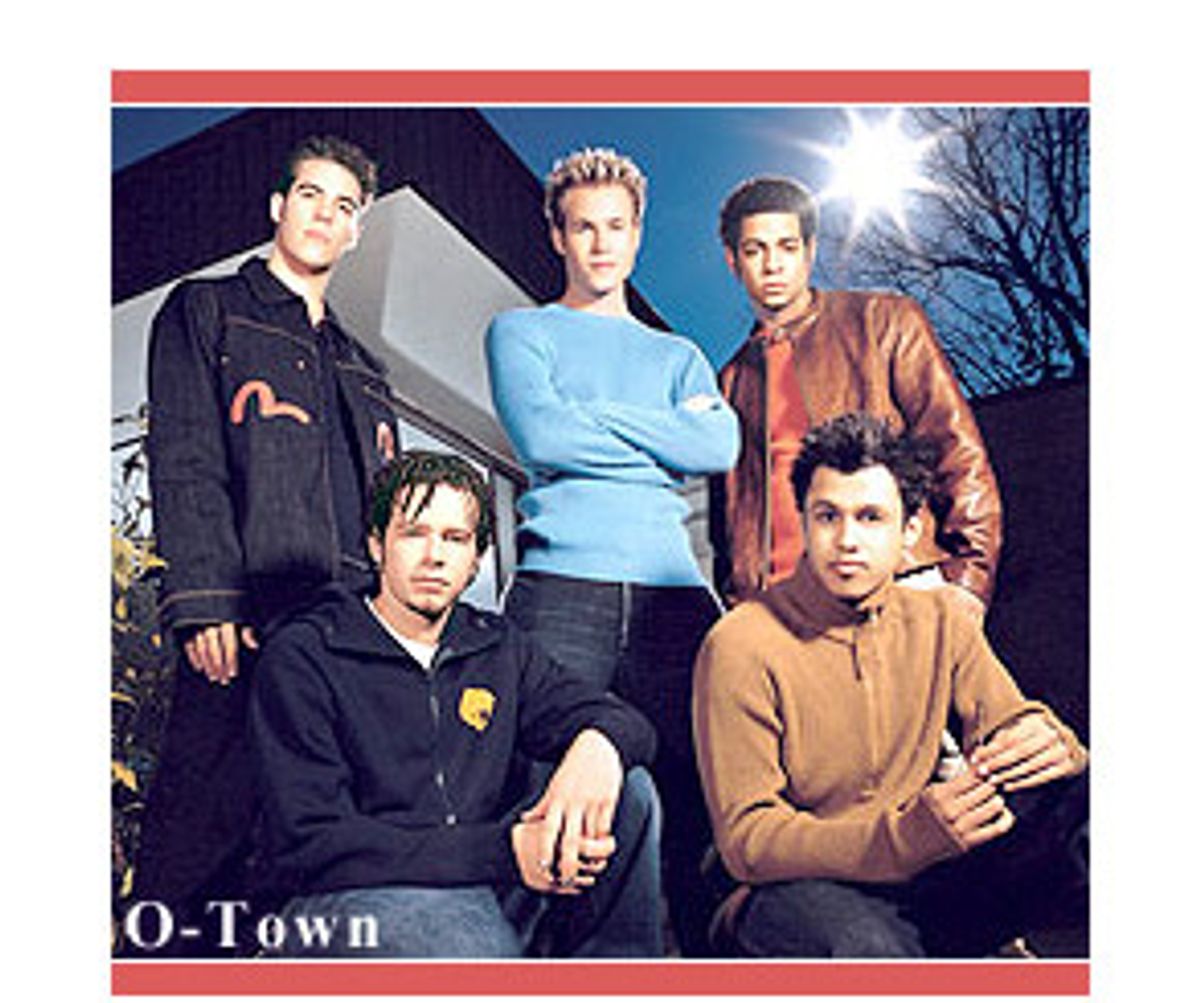 A giant, ghostly white "O" floated in the center of a stage moments before the made-on-ABC prefab boy band O-Town stormed the stage for the first show of their Liquid Dreams summer tour. The thousands of teen and preteen girls in the audience roared like a low-flying supersonic spacecraft and thrust their neon green O-Town glowsticks overhead like mini light sabers.

A glowing purple scrim behind the "O" vanished, revealing a backing band and five white sheets hanging vertically above a polished aluminum riser at the rear of the stage. The music reached a crescendo, the sheets dropped and the five members of O-Town -- Trevor, Jacob, Erik, Dan and Ashley -- burst forth. As they popped, locked and Frankenstein-danced their way onto the main stage they sang "All for Love." Dressed in five flavors of Fred Segal urban chic, they looked like male cheerleaders spun out on crystal meth. The group mmm-bopped and twirled. The crowd jumped up and screamed; they would remain on their feet for the duration of the show.

Oddly, though, it appeared that a few things were out of whack with the pop dream machine. The slick music -- contemporary pop with the thick sheen courtesy of some of the world's highest-paid producers and competent studio musicians -- was dead on. But the group's vocal harmonies seemed off. And there were only four spotlights directed at the stage, which left one member perpetually flailing in the dark.

More often than not that was Jacob, a latter-day Donnie "No More Games Sucka" Wahlberg, one of the original members of New Kids on the Block. Like the cane-clutching Wahlberg, Jacob fills the strictly codified boy-band role of the lovable but dangerous young man best avoided by good girls. On this night, Jacob's punkish array of dangerous accessories included a studded leather belt, a chain wallet, dreadlocks, Adidas Sambas, a black muscle-T emblazoned with a commie red star and a matching red headband.

Instead of grooving synchronistically with the other members, Jacob shuffled around in the dark, canted forward at the waist with near-geriatric posture. He shook his head enthusiastically to the beat, stomped a foot clumsily here or there and occasionally hopped in line with the other boyz. Mainly, though, he didn't dance.

When he stepped to the mike a few songs later, acoustic guitar in hand, Jacob explained that he'd broken bones in his back a month and half earlier.

The crowd roared and, like the rest of the flaws in the performance, Jacob was immediately forgiven and the show was swept along in the unremitting currents of euphoria and affirmation.

It was a moment emblematic of the special bond O-Town's fans feel with their heroes, an embrace that simultaneously encompasses the band's flawed humanness and pop star celebrity personae.

Most of O-Town's followers first saw the current members of the group when they were normal guys battling for one of five slots in a boy band on ABC's "Making the Band" last fall. As the show progressed, viewers watched the applicants actually transform into a real band.

Like all reality TV stars, the men of O-Town encountered numerous emotional, familial and interpersonal crises during the course of the show. They broke up with girls. They experimented with their newfound celebrity superpowers. They took a trip to a tattoo parlor. They struggled with breaking voices and clumsy feet that couldn't follow animatronic cotton candy dance moves.

Being a member of a boy band, the television show made clear, was much more difficult than any aspiring Justin Timberlake might have thought. O-Town fans took notice, and it was these struggles that made them appreciate the finished product -- a boy band with an album on a major label -- perhaps to a greater degree than they would have minus the televised preamble.

"It's been interesting to follow these normal guys from the very beginning and to see all the pressures and challenges they've faced to get where they are," said a 47-year-old father and O-Town fan who was accompanying two sons and a daughter to the show.

This was a sentiment echoed by fan after fan at Friday's show, no matter their age. "We've watched them since Day 1 and bonded with them," said Yvonne Creason, 24, and founder of Kiss Me Trevor, aka KMT, an Internet fan club dedicated to O-Town member Trevor Penick that boasts 1,500 members. "Their whole life is out there for everyone to see on television."

Being dysfunctional reality TV stars with all of their warts intensified, and being exposed before they were pop stars, has paradoxically made the five members of O-Town and their decidedly abnormal vocation seem somehow more human than human to their fans.

Devotees of run-of-the-mill manager-created, money-driven boy bands like 'N Sync and the Backstreet Boys obsess over the details of their pinup heroes' lives. They might catch an occasional, fleeting glimpse of the behind-the-scenes lives of these bands in the pages of Teen People or Tiger Beat, on MTV's "Cribs" or "Diary" programs, or on any number of fan Web sites, but they'll never have the kind of simulated access to the minutiae of the band members' personal and professional lives that O-Town fans have had since the beginning. Granted, what O-Town fans saw on the television show was a glossy, edited version of the events leading to the band's formation that was crafted to emphasize TV drama, but it's still more access than most 'N Sync fans can ever dream of having.

The development of this special bond has led to a new kind of pop fandom that is oddly skewed toward fetishizing the normally invisible (and patently slimy) business side of the music business. Indeed, the televised creation of bands like O-Town and their female mirrors on NBC -- the band Eden's Crush from "Pop Stars" -- has spawned a new breed of superfan that's obsessed not just with the band but with everyone who appears on camera in association with the band -- including their families, band management and record execs.

It is fans of this sort, it became clear during the intermission before O'Town took the stage, that made up the core of the audience at Friday's performance.

C4C, short for Crushin' 4 Cronin, is the name of an Internet club devoted to the adulation and worship of Mike Cronin, part of the O-Town management team and a character on the current season of "Making the Band." (Cronin also happens to be the brother of one of the guys in LFO, aka the Light Funky Ones, another boy band.)

The existence of C4C along with www.O-Townkeys.com (a Web site devoted to the O-Town backing band) and B4B, aka Burnin' 4 Berkowitz (dedicated to the vice president of artists relations for J Records, O-Town's label, and another character on this season's "Making the Band"), illuminate this odd new industry, where seemingly nothing takes place behind closed doors.

Cronin is a tall, frosted-tips mall looker with a gym bod, the kind of guy who has a closet-full of shiny slacks and ribbed Prada crew Ts. While he's not in-front-of-mike talent, you can imagine his smiling visage meriting its own billboard on Sunset Boulevard, or, at the very least, a special-edition Trapper Keeper folder.

When he escorted the mother of one of the members of O-Town to the sound booth in the center of the Greek before O-Town took to the stage, the entire audience turned to watch him, and screams of "Mike! Mike! I love you Mike!" poured out from all over the stadium. Followed, of course, by a more general tinnitus-inducing shriek.

Even Lew Perlman, the controversial one-time manager of the Backstreet Boys and 'N Sync, who played a prominent role in helping to develop O-Town and was a major character during the show's first season, is an O-Town fan favorite. Perlman and the band have since parted ways, but because of his affiliation with "Making the Band," O-Town fans revere him.

"What Epstein did for the Beatles in the 20th century, Perlman did for O-Town," Charmaine Frost, 48, media relations director of the 10,000-member Destination O-Town Web community, said. Frost, along with 17 other women in the Dcrew (what members of the Destination O-Town community call themselves) from as far away as Florida and Pennsylvania, had converged in Los Angeles to caravan up the California coast to see three O-Town shows.

While the Dcrew and the rest of the fans at the Greek seemed to know all of the ins and outs of the band members' personal lives and business arrangements, they'd come to see O-Town live, unmediated, in the flesh and rocking.

What they got was a mixed bag of O-Town hits and covers of classic rock songs by everyone from the Goo Goo Dolls to Prince. And whether it was the slightly out-of-key Dan soloing on an O-Town hit single or the slightly out-of-key Trevor segueing less than skillfully from a cover of the country tune "Friends in Low Places" to Outkast's "Miss Jackson," the crowd seemed to love every second of it.

The production values seemed closer to high-budget community theater than to the futuristic, pyrotechnics-heavy, "Matrix"-like aesthetic that is now routine for multimillion-dollar live boy band appearances. (The Backstreet Boys, for example, soar through the air on techno-surfboards.) But the O-Town performance was still more than satisfying because of the boisterous enthusiasm of the group, which had a sparkle, shininess and enthusiasm that superseded any choreography or melodic fuzziness. And maintaining a certain roughness, even if they don't mean to do so, reinforces their realness to fans who still imagine them as the guys next door instead of rock stars.

Or perhaps part of the overwhelming crowd reaction also had to do with the new heights of sartorial greatness some of the members of O-Town soared to on this humid summer night. Erik, for example, who looks like he would have been an ideal musical guest on "Miami Vice" had he been born 10 years earlier, was sporting a baseball stirrup sock on his right forearm along with batting gloves during the first few songs. To the great relief of fans, although the batting gloves disappeared for his solo cover of "Purple Rain," they were back later in the night for the encore.

Judging from the screams in the audience, the highlight of the concert for most fans was when O-Town brought a young girl onstage and placed her on a stool at the center of the stage for a two-song serenade. She blushed and clung to the stool as if a long sentence in a Kazakh prison awaited her if she let go. At the same time, she vicariously fulfilled the fantasies of thousands of other young girls in the audience who screamed things like, "I would give anything to be her."

When the show ended at 10 p.m., the majority of fans filed directly back to the parking lot so their legal guardians could take them home. But a few hundred hung around to wait behind a set of flimsy metal barricades in hopes of glimpsing O-Town entering their tour bus.

The dozen or so security guards on the other side of the fence would have been no match for this Britney-esque legion of pumped-up O-Town fans in their sparkly crop tops, printed with "princess" and "hottie." But instead of charging, they respectfully kept their distance and waited as their rides home became impatient and their bodies sagged from three hours of screaming and standing.

It was a night when many Liquid Dreams came true, but for these fans, meeting the band would not be one of them.