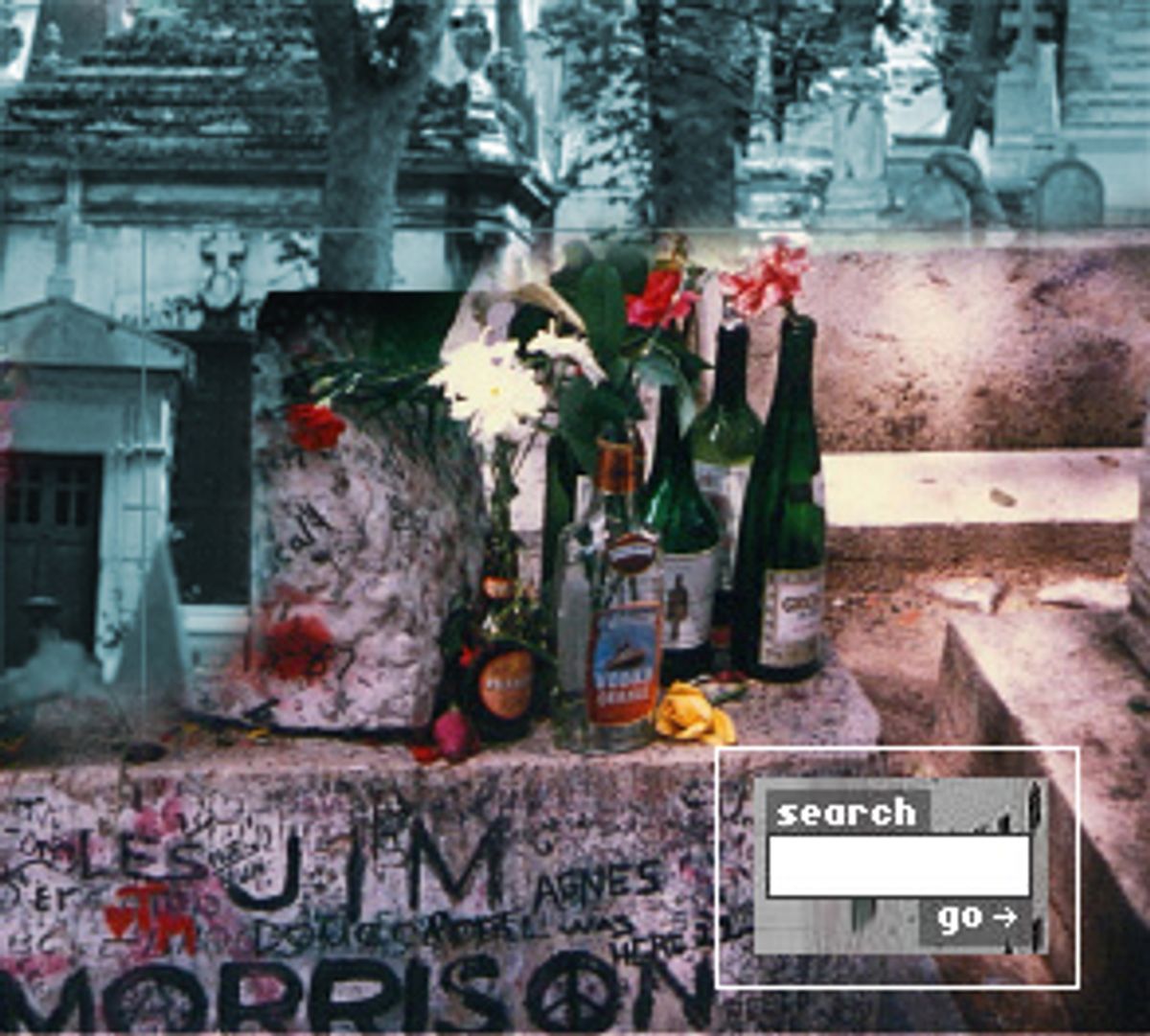 Some people collect stamps, others collect Hello Kitty paraphernalia, Jim Tipton, 27, collects dead people -- the locations of their graves, that is. The Salt Lake City webmaster currently has more than 2.6 million entries in his online archive of the dearly departed at Find A Grave.

"My goal is to catalog everyone who has ever died and been buried. That's my ultimate goal," says Tipton, conceding humbly, "I know it's a lofty one, one that I obviously won't realize in my lifetime."

So many dead people, so little time.

Tipton's quest to document online the final resting places of the dead and buried started with Al Capone.

As an undergrad at Grinnell College in Iowa, Tipton took a seven-hour road-trip to Chicago to visit the Mafia don's grave. "I went with my college girlfriend, who is now my wife. We went and found his grave and left a flower. I was kind of hooked when I stood there and was six feet from Al Capone. I was kind of awestruck."

Visiting the graves of Karl Marx, Marilyn Monroe and Jim Morrison became Tipton's idea of a good time. On the Web, he discovered that he's not the only one who enjoys posthumous proximity to the once famous or infamous.

In 1995, Tipton started the Find A Grave site to simply list the burial locations of people who had made a name for themselves while alive. "I didn't find it out there so I built it, never thinking that anyone would have any interest in it, because people think that it's weird and morbid. But people started coming and using it and discovering that they weren't the freaks their families had made them out to be, and that other people share their interest in visiting cemeteries."

Find A Grave has since spawned a very-much-alive online community with about 500 core members. The site's most avid aficionados enjoy a friendly competition to build the most virtual interments -- or online memorial sites. Some members have built hundreds, even thousands of sites where the names of the deceased are posted with their dates of birth and death, the names of cemeteries where they are buried, photos of them while alive and of their grave sites and written tributes.

Stew Thornley, a Minnesota government worker, has contributed 400 graves to the site, which makes him one of the top 20 contributors in the famous grave category. He spends his vacations visiting the graves of dead U.S. presidents and Baseball Hall of Famers. "There are only 36 dead presidents -- that's pretty easy. Baseball Hall of Famers are much trickier." Martmn Dihigo is buried in Cementerio Municipal Cruces in Cuba; 10 other Hall of Famers have no known burial site.

Thornley is a guy who actually makes his travel plans around when an aging former president might croak. For instance, he has a standing date to have lunch with his godson in Grand Rapids, Mich., who attends college there, when Gerald Ford kicks the bucket, though he fears the kid might graduate before the former president dies. But even Thornley has a limited patience: He's so tired of waiting for Ronald Reagan to die that he's decided to go ahead with a trip to Southern California later this summer to see 12 Hall of Famers there.

Find A Grave is a classic only-on-the-Web story: a group of obscure hobbyists who have discovered, thanks to the Web, that they aren't alone. Now they come together online to share information and bragging rights, like so many obsessive birdwatchers or matchbook collectors. But, in that organic way of the Net, the site has evolved beyond a hobbyist's hangout to a full-scale online cemetery, built by grieving family members, genealogy buffs and fans, all of whom use the site to honor the dead with the kind of memorials that you'll never see in your local plot.

"There's a time in the real world when people are just sick of hearing about your grief. I have been told to get a grip, to move on, to get with the program," says Jeanne Herrod of Salem, W.Va., a 55-year-old widow who discovered the Find A Grave site four months ago. She's created pages to honor her husband, Mason Lee Herrod, who passed away two and half years ago, as well as 18 other relatives, including her father, her grandparents, her great-grandparents, her father's brothers, her great-uncles and her husband's family members. Her sites are decorated with whirling animation, music and photographs from the individuals' lives.

Herrod visits her husband's page every day: "I don't get to my husband's grave often. I can only use an analogy of the Vietnam War Memorial in D.C. where people actually go and feel as if by touching those names on that wall they're with the individual. We have the same feeling about our sites. To go to my husband's and start his music playing, and just look at the pictures and read what's been written, what I wrote and others, it's like visiting the grave without leaving home."

Personal memorial sites like these inspire a collective mourning not regularly seen at your local cemetery. "By inviting people to look at our sites, we're inviting people into our lives. These sites are very personal," says Herrod.

How many times have you anonymously left flowers on a stranger's grave? A flag on a soldier's tomb? Anyone taking a stroll through a virtual cemetery can leave icons of virtual flowers on a stranger's cyber-tomb, an image of a stuffed animal on the page of a 19th century child who died in infancy or a waving American flag on a veteran's tomb, as many did on the Fourth of July. More than a novelty, the memorial site is now an actual shrine. And taking just such a stroll proves how many strangers feel the pull to honor people they've never met.

Such is the case for Dustin Oliver, 19, a Taco Bell shift manager, new dad and Civil War buff who has created 31 interments on the Find A Grave site. "I like going there about once a week, or every couple of days, to see what other people have put on there -- my grandfather or my uncle -- someone will put a flag on their grave or now they have a pair of combat boots that you can leave as a memorial, a picture of a battleship."

Others are motivated by the desire to help strangers find their dead. Find A Grave's top contributor is a 60-something former president of the Seattle Genealogical Society, Carolyn Farnum, who has personally entered 50,000 records into the site in just seven months. She tours cemeteries in Cody, Wyo., and Reno, Nev., on her motorcycle, seeking out the graves of her relatives, pioneers and Civil War soldiers. "It's much more fun than just traveling," she says. "It's a little detective thing." She regularly receives e-mail from people who have found long-lost relatives on the site, because of her contributions.

Tipton may not be morbid but he does have a kitschy appreciation for the paraphernalia of death. He admits, somewhat sheepishly, that he owns an antique coffin screwdriver (which only screws in), a coffin crank from the 1950s from Decateur Coffin Company, and an embalming fluid bottle from the National Casket Company. His business cards -- running the site, which sells advertising and accepts donations from visitors, is his full-time job -- sit in a miniature coffin.

This interest in technology extends into the 21st century, too. Even if you know what cemetery someone is buried in, finding the plot itself to document and photograph can take some sleuthing. So, Tipton's taken to adding the global-positioning satellite coordinates to the entries he makes to the site. He sent his old GPS unit to A.J. Marjik, one of the top contributors to Find A Grave's Famous Graves category, who has added 2,982 photos of famous burial plots to the site.

The truth is you don't have to be dead to make it into Find A Grave, you just have to have made your last plans. Curiosity seekers will find Barbra Streisand's future last resting place here, as well as "The Price is Right" host Bob Barker's.

But even some of the grave hobbyists who relish looking for others' final resting places don't have such grand plans for where their own mortal remains will end up.

Thornley, the dead-Baseball Hall of Famer-finder, says: "I'm too cheap to buy a coffin. I'm probably going to be cremated and not interred anywhere. I enjoy seeing what others have done. Let all the others spend all the money, and let me enjoy theirs."

And Tipton, creator of the Find A Grave phenomenon, reflects: "The whole thing of being put into a big fancy coffin in a vault seems kind of artificial." He'd like to be cremated and then have his ashes buried. At his relatively young age, he already has his tombstone with a question mark on it picked out. And, of course, he'll have his own page on Find A Grave: "Maybe someone out there who is into dead Web developers -- they can find me."