The congressman's colleagues should have demanded he come clean about Chandra Levy right away. Instead, they're still defending his stonewalling. 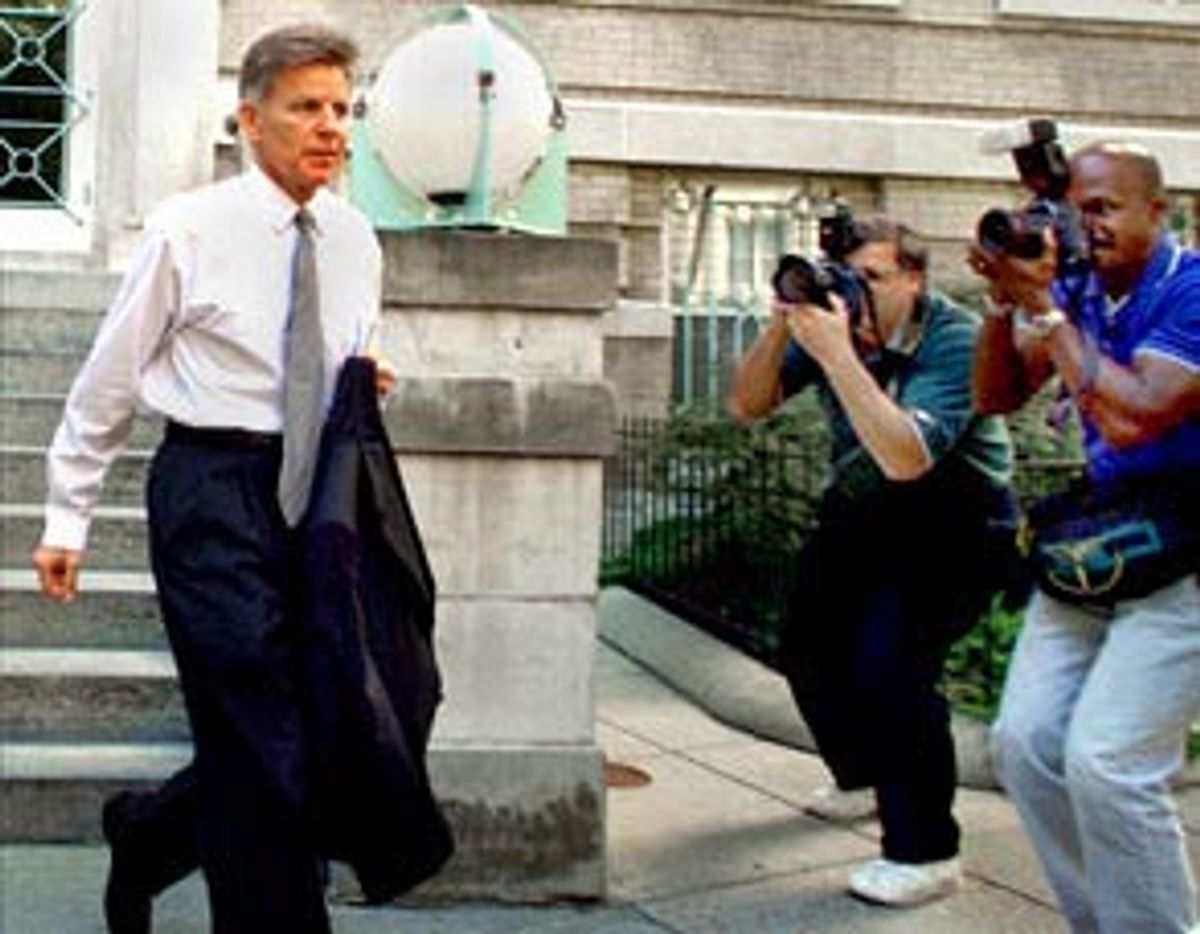 Liberal Democrats have always suspected that Blue Dog moderate Gary Condit was a closet Republican. Now, the paranoid among them must be wondering if his disastrous handling of the Chandra Levy tragedy is part of a secret plot to help President Bush.

After all, with Bush sagging in the polls, budget deficit projections soaring after his big tax cut, and his energy and environmental plans going up in smoke, the eyes of the nation are nonetheless fixed on Gary Condit, as the cable shows chat 24/7 about what the Democratic congressman might have had to do with Levy's disappearance.

But instead of criticizing their centrist colleague for his bad judgment in getting involved with a 24-year-old intern -- and then scrambling to cover it up after she disappeared -- many Democratic legislators have gone to unbelievable lengths to defend Condit.

"I know one thing for sure, that Gary Condit did not have anything to do with the disappearance of Chandra Levy," Rep. Nancy Pelosi told CNN, insisting Condit is still ably serving his constituents despite the controversy.

That's an incredible statement, unless Pelosi herself was spending every minute with Condit the day Levy is believed to have vanished. (And while the list of women who've been intimate with the married congressman grows longer every day, Pelosi isn't on it.) Personally, I too find it hard to believe Condit murdered Levy, but no one can say for sure that he didn't. And if it turns out that Levy came to harm or harmed herself, it's very likely that it had something to do with the young woman's sad relationship with the 53-year-old congressman. Pelosi has no business denying that possibility.

Democrats should have been calling on Condit from Day 1 to come clean about his relationship with Levy. The fact that he only recently told police they were lovers means law enforcement officials lost critical weeks in trying to understand Levy's frame of mind at the time she disappeared. In the event she was murdered, they no doubt lost access to crucial clues, clues that probably don't but could conceivably lead to Condit. (Tragic but true: One-third of women who are murdered are killed by their boyfriends or husbands).

Instead, many Democrats have concentrated on showing support for their beleaguered colleague. "It's important to have him know that he has friends standing by him," declared Rep. Elliott Engel, D-N.Y. "When someone hits a rough spot, do you throw him overboard? I don't think so," adds Rep. Anna Eshoo, like Condit, a Democrat from California. "None of us here, Republican or Democrat, kick people when they're down."

While California Sen. Dianne Feinstein has criticized Condit for his failure to come clean, House Minority Leader Richard Gephardt continues to insist that "Gary is cooperating in every possible way with the police investigation to try to make this happen, and that's what he should continue to do. I think he's doing what he's been asked to do." It was Gephardt's bad luck to be quoted by the Associated Press defending Condit the very same day federal officials opened a criminal probe into whether the congressman has obstructed justice during the investigation.

It fell to former Clinton White House Counsel Lanny Davis to blast his fellow Democrats in Thursday's New York Times. "The silence of Democratic officials is both wrong and politically shortsighted," wrote Davis on the op-ed page. "Their failure to speak out may be giving tacit approval to Mr. Condit's delay in being forthcoming with the public."

In fact, the sight of Democrats rallying to Condit's defense is a symptom of everything that's wrong with American politics today. Politicians live in a parallel universe where rules are broken without consequences, and arrogance crosses party lines. Certainly Democrats have no corner on womanizing: the series of revelations about Reps. Henry Hyde, Bob Livingston and Newt Gingrich during President Clinton's impeachment crisis proved that.

But Democrats do seem to have a slight edge on Republicans when it comes to stupidity about their womanizing, and what to do once they get caught. From Gary Hart's monkey business with Donna Rice to Clinton's "I did not have sexual relations" speech; Jesse Jackson's dalliance with a staffer to Gary Condit and his "good friend" Chandra Levy (how a busy 53-year-old congressman finds time to be a "good friend" to a 24-year-old intern always seemed a question demanding greater scrutiny) -- Democrats cavort with an evident zeal to be discovered, but then lamely try to cover their affairs up, long past the time when that's possible.

And Democrats have apparently been covering up for Condit for years. Before he was a Blue Dog, he was widely rumored to be a hound dog. Waitresses, staffers, interns -- no woman was safe from the attention of the conservative Baptist minister's son with the wandering eye. I worked in Sacramento for the California state Assembly when the frosted-haired Condit was an assemblyman, and he was the kind of person older women staffers warned you not to be alone with, who you might not want to stand next to on the "members' elevator" -- the one staffers could only use when traveling the Capitol with their "member" (and the fact that the members were almost all men made the term an icky but hilarious double entendre.)

Those were the days when the Assembly was like Animal House under Speaker Willie Brown, who, it should be noted, was never dumb enough to lie about his womanizing; in fact, he's proud of it. (The still-married San Francisco mayor, 66, recently had a baby with his 38-year-old chief fundraiser, which means he's apparently broken one of his few rules for romance: He once told a reporter the combination of his and his current girlfriend's age could never add up to more than 100.)

Sacramento under Brown was a sexual free-fire zone, with legislators openly partying with staffers and putting their mistresses on payrolls. Of all the places I've worked, it was the absolute creepiest for women. You thought every day about what you wore, lest you unwittingly signal you were one of those women, the ones hired for skills other than word processing or bill analysis. It was one big frat party, and Condit was a nightlife-loving party boy whom Brown sometimes hung out with, even though they might clash politically during the day. (His nickname was Gary Condom, and women staffers joked about organizing a "Condoms for Condit" fundraiser, to ensure he would at least have safe sex.)

That's why Condit's 1988 falling out with Brown, when his Gang of Five tried to topple Brown as speaker, was semi-surprising. Brown was thought to be cozying up to the so-called "Grizzlies," a relatively ineffectual coalition of liberal Democrats (which included Tom Hayden and my then-boss, Assemblyman Tom Bates). Condit and his legislative pals -- fellow party boy Rusty Areias, Chuck Calderon, Jerry Eaves and Steve Peace -- tried to partner with Republicans to depose Brown, but the wily speaker swatted them away like gnats. The rest of the gang became a political footnote, but Condit went to Congress.

Since Levy's disappearance, I've sorted through my shadowy memories of Condit and wondered if they're at all relevant to his troubles in the Levy case. As always, I agonize over whether someone's private misbehavior should be fodder for public debate, though frankly, I think Condit's political and personal hypocrisy -- he was one of the few Democrats to blast Clinton for the Lewinsky affair, despite his own womanizing past -- has always made it fairly easy to defend scrutiny of his private life. I've been surprised not to see it before now.

And as the number of reported Condit paramours continues to grow, I've come to believe even more strongly that he deserves scrutiny, now. Now a Modesto minister says his teenage daughter had an affair with the congressman; flight attendant Anne Marie Smith is telling her story to investigators, and a Washington journalist is also widely believed to be among those who had affairs with the busy politician.

Let me be clear: Condit's randy private life doesn't automatically make him a bad public servant. But the fact that he was able to go to Congress, hold his seat and become a statewide political powerhouse despite his womanizing fortified an arrogance that led to, at least, an unforgivable lapse of judgment when he lied to police about Chandra Levy. That swaggering attitude caused him to think it was OK to cover up an affair with a missing constituent, and deprive police of information that might have solved the mystery -- which may well involve murder -- much sooner.

Condit's Democratic colleagues, from Gephardt to Pelosi to Gov. Gray Davis, have all helped foster that arrogance. "I know, as a mother of five children, four daughters, one of whom lives in that neighborhood, that our major concern should be focused on finding Chandra Levy," Pelosi told CNN. That's true, and Condit would have helped that cause if he'd been honest about his affair with Levy from the start. The fact that Democrats are defending Condit, rather than calling for him to come clean -- or perhaps, even resign -- makes them complicit in his deception.