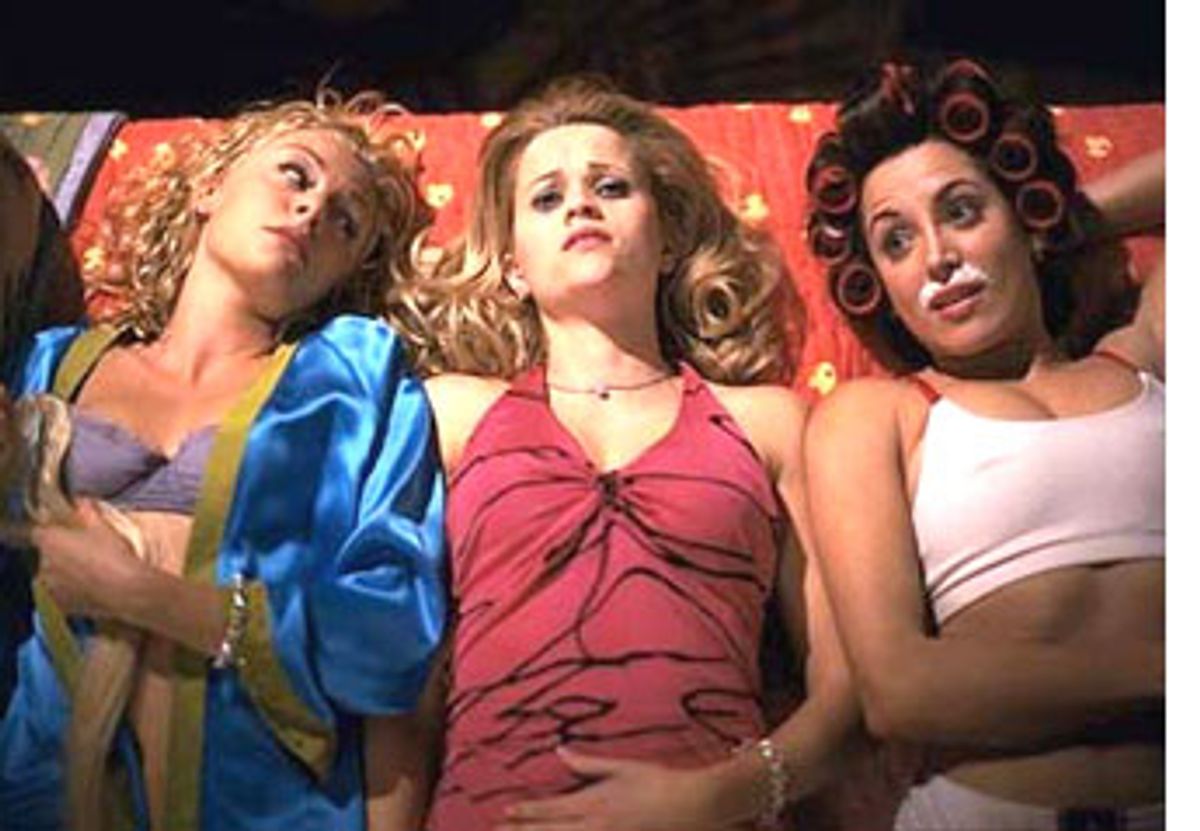 "Legally Blonde," a hefty handful of funny jokes notwithstanding, lacks a pleasing shapeliness. But you can't say the same thing about its star, Reese Witherspoon: Her sophisticated-pixie brilliance practically makes the movie, and her easy, confident, curvaceous carriage doesn't hurt, either -- she's the thinking guy's cupcake, maybe because her mind is just as supple as her curves. When, as Beverly Hills-bred sorority girl Elle Woods, she shows up for her first day at Harvard Law School in a trim-fitting ensemble of pink pearlized leather, the only appropriate response is a heart-shaped sigh. If it's possible to play the essence of a perfume cloud -- an '80s classic like Yves St. Laurent's "Opium," let's say -- Witherspoon does it in "Legally Blonde."

When we first meet Reese's blond glamour-cutie Elle Woods it's the end of her senior year in college, and she's eagerly awaiting the ring and marriage proposal that she's sure her handsome, dull boyfriend Warner (Matthew Davis) is about to deliver. He doesn't come through: He's on his way to law school, and he's hoping for a career in politics. "If I'm going to be a senator, I need to marry a Jackie, not a Marilyn," he explains matter-of-factly, delivering the line more to Elle's plunging neckline than to her face.

First heartbroken, then determined, Elle decides that the best way to get Warner back is to get into law school herself. She has a 4.0 grade point average -- so what if it's in fashion merchandising? She puts on a sequined bikini for her admissions video, and somehow the old codgers at Harvard decide she might just be a complementary addition to their hallowed halls. When she arrives on campus, though, she realizes that no one takes her seriously because of the way she looks, least of all the haughty brunet prep Vivian Kensington (played by the marvelous Selma Blair), who, much to Elle's horror, has stolen Warner away over the summer. That means war: Elle sets out to prove her snooty classmates wrong and get her boyfriend back.

The opening scenes of "Legally Blonde" (directed by Robert Luketic, making his feature debut) vibrate with a bubble-gum pink glow, and their cartoonishness is exhilarating. We see Elle in her sorority house, surrounded by a gaggle of giggling sisters, getting ready for her big date with Warner: None of these women are exactly rocket scientists, but Luketic doesn't hurl cheap jokes at them so much as bounce gags off them with a gentle ping. When it comes to humor, Luketic has a nice touch. He knows how to frame individual jokes so they're like little jewels. There's one particularly brilliant one-liner delivered by the always-funny Jennifer Coolidge (perhaps best remembered as Stiffler's mom in "American Pie") as Paulette, a friend the depressed Elle makes at a beauty parlor far outside the tweedy, upper-crusty confines of Harvard Square. I won't give it away here, but Coolidge delivers the joke with such offhanded insouciance that it seems to take a quick whirl around the movie theater before it swings back to zonk you. It's like a trick bullet, and it's killer.

The movie ambles along amiably enough, and there's a heartbeat of intelligence pulsing beneath Karen McCullah Lutz and Kirsten Smith's script (adapted from a novel by Amanda Brown). "Legally Blonde" shows a fair amount of perceptiveness about class issues. Even though Elle has as much money as her Harvard classmates (or more), with her love for flashy, ultrafashionable outfits and candy-colored manicures, she fits in better with the working-class girls she meets at the beauty parlor. And the movie isn't afraid to send up the drabness of Ivy League academia -- that of Harvard, in particular. Anybody who's ever spent 30 minutes in Cambridge's Harvard Square will instantly recognize the "I'm smart and possibly very rich, but I'm still going to wear this pilly poncho around campus as a symbol of my earnestness and rejection of bourgeois values" look of the students in "Legally Blonde."

They're cartoons, of course, just as Elle is a cartoon, but that's what makes "Legally Blonde" fun. The bad news is, the movie starts heading nowhere after the first half-hour, and careers and flounders badly until it gets there. Too many superb actors -- in particular, Holland Taylor, as a tough-nuts Harvard professor, and Victor Garber, as the professor who first picks up on glimmers of Elle's intelligence -- are wasted. There are numerous subthreads in the story that are simply left hanging, undeveloped. And Luke Wilson, so unassumingly funny in "Home Fries" and "Charlie's Angels," supposedly plays Elle's love interest here, but we don't get to see the romance unfold.

But even after it becomes clear that "Legally Blonde" is headed nowhere fast, there's always Witherspoon and her winsome Chihuahua Bruiser. The two are inseparable, and even wear matching Tiffany heart necklaces. Witherspoon, with that acorn-shaped Kewpie doll face, has always been a charmer. But the real key to her appeal is that inside, she's tough as old boots, and here, as well as in pictures like "Freeway" and "Election," she's not afraid to show it.

Witherspoon plays Elle with a squinty determination that's both devilishly funny and endearing. She delineates Elle's character beautifully just in the way she takes notes on her first day of class: Eyes round and alert, mouth set in a hard hyphen of concentration, she occasionally turns her attention to her heart-shaped note pad, where she scribbles away with a fluffy pink feather pen. Witherspoon telegraphs Elle's sense of justice and outrage with just enough of a broad twang: "Whoever said orange was the 'new pink' was seriously disturbed." If Witherspoon could be summed up as a color, she'd be the new pink. I doubt she'll ever be anything as garish and unbecoming as orange.