Robert De Niro, Marlon Brando and Edward Norton (almost) get away with this high-tech heist for adults. 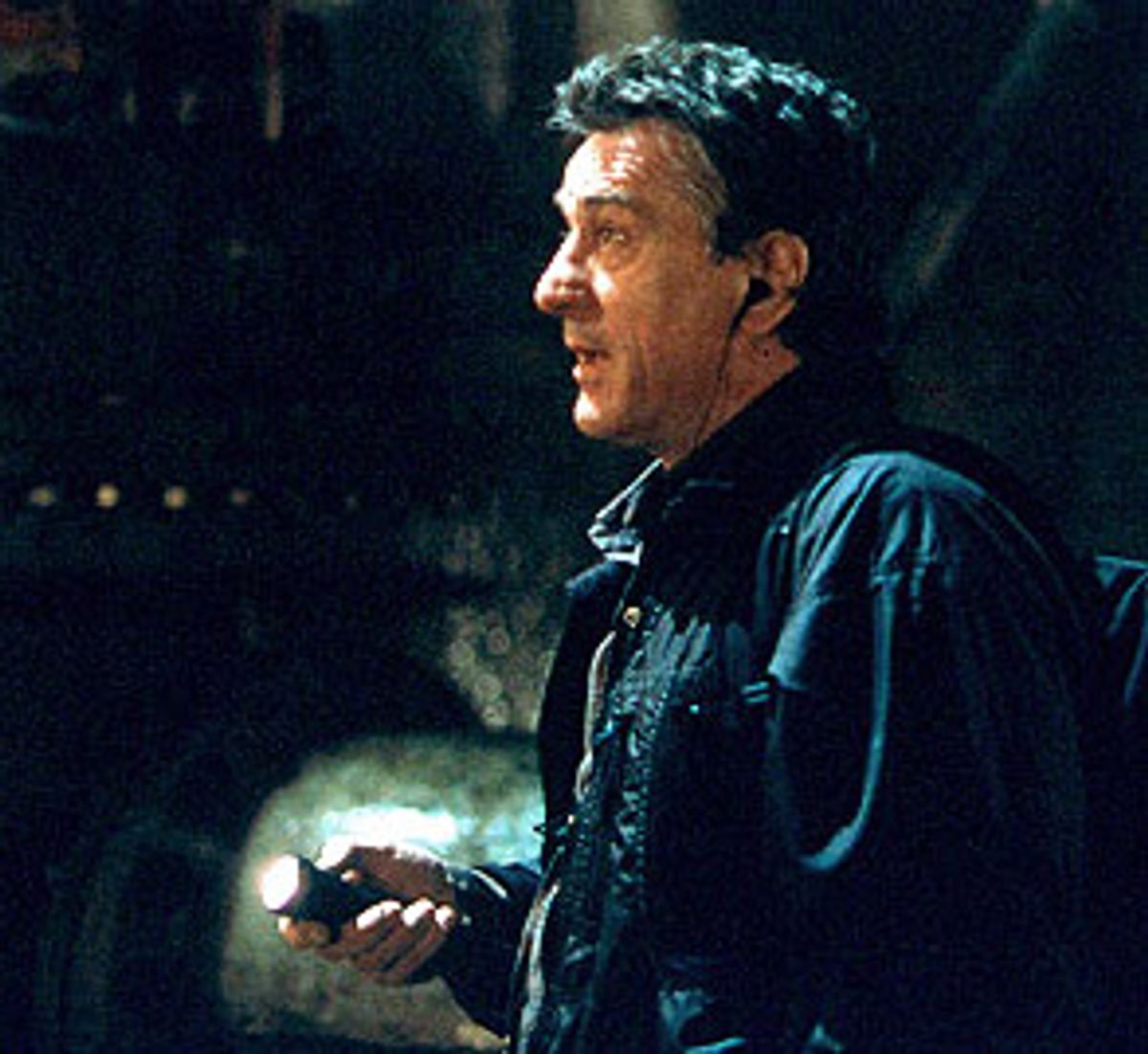 "The Score" manages to tell the story of a high-tech heist with only one muffled explosion and minimal gunplay. There are no car chases. The movie has the kind of cast you don't often get to see act together, and it shows every sign of being an entertainment put together by adults for adults -- not such a common thing anymore.

Robert De Niro plays Nick, a Montreal jazz club owner who has long been a professional thief on the side. One of his steadfast rules has been to never pull a job in his hometown. But his fence, Max (Marlon Brando), tells him of a priceless gold scepter inadvertently confiscated in a smuggling attempt and now sitting in the secure confines of the Montreal Customs House. Max has inside information from Jack (Edward Norton), an ambitious young thief who's working at the customs house in the guise of a retarded night janitor. The money Nick stands to make would let him quit stealing once and for all and settle down to his good life with his girlfriend Diane (Angela Bassett), who sees his willingness to take on this job as proof that he'll never change.

Good noirs have been fashioned from premises even more clichéd than that. But lately, the best noirs have inverted or reversed gangster clichés, like Ray Winstone's character in "Sexy Beast." It's not clear that Robert De Niro could do something similar here. At this stage of his career, he's become too settled a presence, too comfortable with himself, to believably play desperate. I may be in a minority, but I enjoy the character work De Niro has been doing in the last few years much more than I enjoyed the recessive and opaque qualities that sometimes seemed to inhibit him (particularly in Scorsese pictures like "The King of Comedy" and "Casino").

In "The Score" he seems to be considering each move so thoroughly there doesn't appear to be anything that could force him to make a stupid move; you get the feeling that giving in to greed or temptation would, for this man, amount to violation of dignity. And while Nick takes pride in his work, it genuinely seems a means to an end for him (good living) instead of some existential thrill. The trouble is that this solidity leaves Nick without any real motivation to take the job. He doesn't seem to need the money; he knows the danger involved. A weaker actor, one more naked than De Niro is now capable of being, might have revealed some inner compulsion in the character. But De Niro's steadiness becomes part of the movie's rugged stolidity.

I'd be lying if I didn't admit to feeling at least some gratitude toward the director, Frank Oz, and the writers, Kario Salem, Lem Dobbs ("The Limey") and Scott Marshall Smith, for not feeling the need to rub our noses in pyrotechnics or to follow the lead of most action movies and edit each sequence to incomprehensibility. You enjoy quiet things here, like a close-up of lock tumblers lining up so De Niro can deftly open a safe. Or a neatly timed joke during the big heist sequence involving De Niro sneaking past some temporarily disabled security cameras.

At the same time, the filmmakers seem afraid of providing any flash or kinetic thrill. Heist movies generally move more slowly since the centerpiece always involves observing the thieves going about their painstaking work. The thrills come in when unforeseen complications threaten to scotch the whole plan. Even when that happens here, Oz resists ratcheting up the suspense -- he just slackly cuts between the various strands coming together. After a while you long for a diversion, like the few jokes provided by Jamie Harrold as a computer whiz kid who Nick employs, or the humorously glowering presence of Gary Farmer (who played Nobody in "Dead Man") as Nick's strong-arm bully. When the movie gives us stray glimpses of Cassandra Wilson and Mose Allison performing in Nick's club, you wish that the camera would just stay on them for a few numbers and let us luxuriate in their talent.

Handsomely shot by Rob Hahn and designed by Jackson De Govia, "The Score" has a look that could be described as lived-in sophistication. The jazz club and apartment owned by Nick are all muted greens and burgundies, rough brickwork and glowing wood. You could imagine moving into the picture's locales and relaxing with a drink, some good music, a book.

The trouble is that that chic urban comfort leaches into every corner of "The Score." The movie is so determinedly low-key that after a while it sits on the screen like a layout from Architectural Digest. Even the actors seem dimmed.

Reportedly Brando and Oz clashed over the actor's wish to go flamboyantly far out with his portrayal of the obviously gay Max. He's held in check here (except for one wild line that feels ad-libbed). He gets one scene with Norton and there are no sparks in his scenes with De Niro. But Brando works so seldom that his presence, the timing of a smile or that familiar voice can be a delight even if, as here, it creates an unfulfilled hunger.

Angela Bassett's role is one of the more thankless that any talented actress has had to endure lately. She's even saddled with one of those "I won't stay around to watch you put in jail or killed" speeches. Like Brando's, her presence is so pleasurable that the crummy role feels like a cheat. Bassett is in some ways an actor out of time -- she has the poise, the confidence, the timing and God knows the beauty that's right out of the best of '40s American movies. As Tina Turner in "What's Love Got to Do With It?" Bassett not only delivered a great performance but a great star turn. Every time she's put in the position here of accepting one of De Niro's delaying tactics you want to tell the filmmakers, a goddess waits for no one.

Edward Norton manages to slip the movie's narcotizing noose. In some ways he gives a showy performance, all hotshot energy, as if perhaps he feared holding his own with De Niro and Brando. But he keeps the energy in check -- it never becomes a demonstration of an actor's tics. And in the scenes where Jack is playacting the role of the retarded janitor Brian, Norton is immensely funny. It seems inevitable that someone is going to chide Norton, claiming he's making fun of the handicapped so I want to be very clear about what's so funny -- not that Jack is imitating a retarded person but the ease with which he fools everyone around him, and the underlying pleasure he takes in that deception. You laugh because each comment that "Brian's" coworkers take as a retarded person's meaningless rambling is a sly joke on their cluelessness. The comic Caroline Rhea once joked that the traditional Southern saying "Bless your heart" is really Southern for "You're so stupid" (as in "Did you lock your keys in the car? Bless your heart"). Norton makes Brian's unvarying toodle-oo -- "OK, buh-bye" -- funnier every time you hear it, as if it were Scam Artist for "Dumbass." He's the wild card, the only thing that doesn't adhere to the film's carefully worked out, deadening plan.