The films he created in the decade of greed made adolescent angst funny and bearable without romanticizing it. 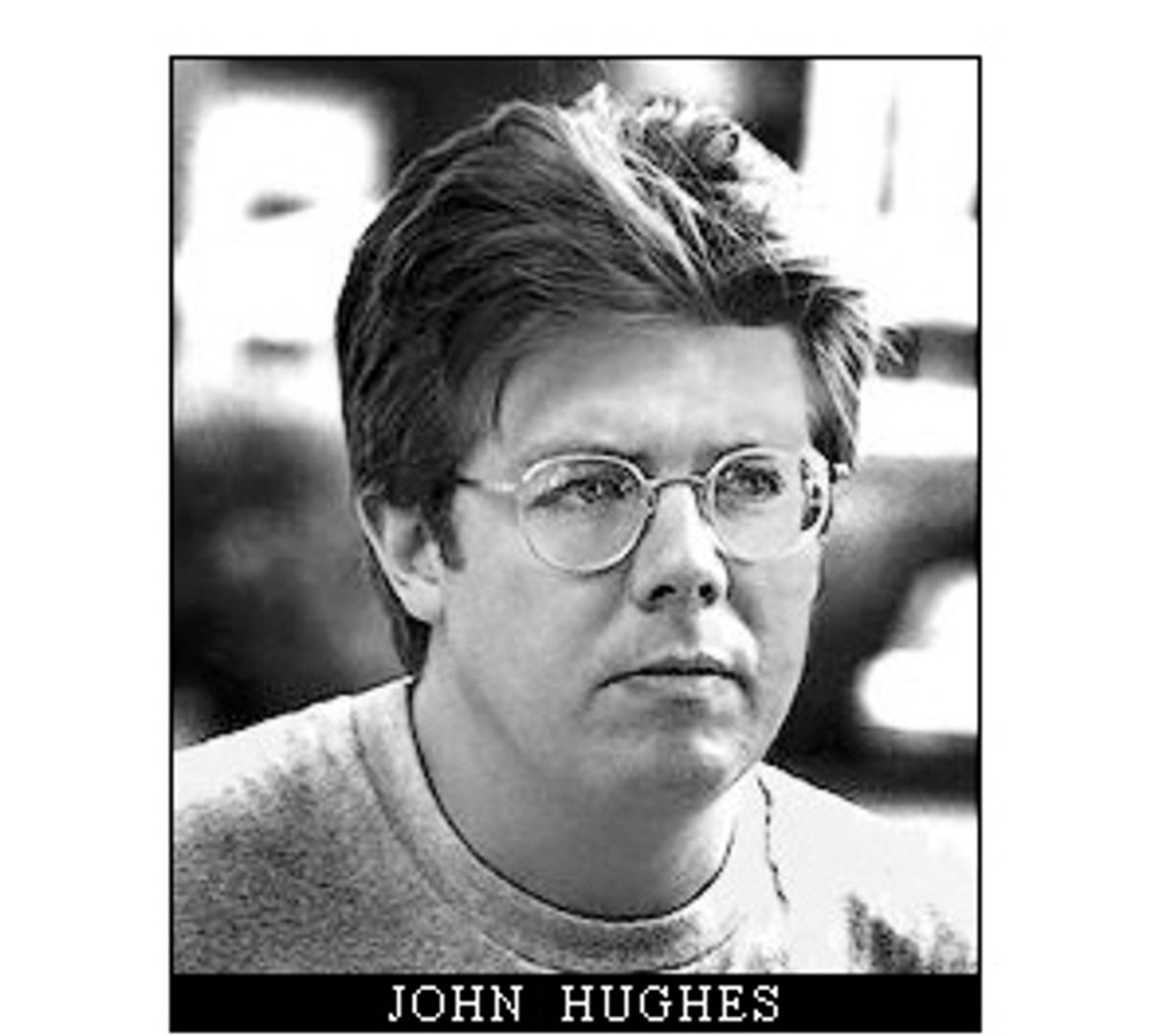 To this day, when I hear the name John Hughes, I get a rush in my stomach that's an awful lot like the feeling I'd get in high school when I spotted my crush standing in the parking lot after classes let out. I became a Hughes fan in 1984, the year his movie "Sixteen Candles" came out, and I revere him to this day for being the first filmmaker who connected with me on a personal level, with an insight into my everyday thoughts, worries and experiences, and for being the only movie person to capture what it was like to be an adolescent in the '80s.

There were plenty of other movies that came out around the same time that I liked. "The Outsiders" (1983) made me incredibly melancholy before I even knew what the word meant. "Return of the Jedi" (1983) and "Indiana Jones and the Temple of Doom" (1984) thrilled me with their epic tales, and "Ghostbusters" (1984) amazed me with its ingenuity and special effects. "Footloose" (1984) made me sick with the desire to be beautiful and sexy and daring like its stars, Kevin Bacon and Lori Singer. And then there was "Risky Business" (1983). All I remember about that one is the nudity, which made me, a strictly raised Catholic girl, feel guilty and confused. But four John Hughes movies -- "Sixteen Candles," "The Breakfast Club" (1985), "Pretty in Pink" (1986) and "Some Kind of Wonderful" (1987) -- were more than entertainment for me. They were comforting and smart but also funny and cool, intimate and personal without being uncomfortably sappy.

Hughes dropped out of the University of Arizona after only a year and began working in advertising, traveling to New York regularly to see clients. During one of these trips, he met some editors from National Lampoon, who eventually asked him to join their team. It was during his time as a Lampoon editor that he made the break into films. In 1978, Hollywood took a Lampoon story and turned it into the hugely successful frat-party movie "Animal House." Sensing they'd stumbled upon a gold mine, the big Los Angeles film companies raided the Lampoon offices, signing movie development deals with a number of people there including Hughes. In 1983, a short piece he'd written, "Vacation '58," was translated into the huge screen hit "National Lampoon's Vacation." The same year, Hughes had his second big winner with a script called "Mr. Mom." The movie, based on Hughes' own experience, starred Michael Keaton as a stay-at-home dad.

Around the time that "Mr. Mom" came out, movie industry executives were figuring out that teen dramedies could be big winners, thanks to the success of movies like 1982's "Fast Times at Ridgemont High" and "Risky Business." Hughes caught on quickly and in 1984 parlayed his early successes into a deal that allowed him to direct a quirky script he'd written about a day in the life of a suburban Chicago girl whose family forgets her 16th birthday. "Sixteen Candles" featured unforgettable performances by Molly Ringwald in the lead role and Anthony Michael Hall as the geek.

What set "Sixteen Candles" above others of its genre was that it was so real; the primary characters were like the kids you'd known since pre-K. Ringwald was 15 years old during filming, with the soft face and figure of someone that age. Her character, Sam, was dorky and vulnerable enough that we could relate to her, but also cool enough that we were proud to, as when she tells herself in the mirror on her birthday morning, "You need 4 inches of bod and a great birthday." I needed some inches myself as I sat watching the film in the dark theater, my mouth full of metal, squinting because I refused to wear the geeky glasses I needed so badly. Sam was so hip she had bangle bracelets and a flouncy skirt that another arbiter of '80s chic, Madonna, would have been proud to wear; but it was also an outfit that I thought I might be able to pull together with babysitting money and a little time at the mall.

Hughes' movies made the awkward angst of adolescence funny and bearable without romanticizing or glorifying it. And Hughes did it best in "The Breakfast Club," about a group of high school students forced to spend morning detention together. As we learn in the opening voice-over, the students are seen by adults, their peers and maybe even themselves "in the simplest terms, the most convenient definitions [as] a brain, a prom queen, a basket case, a jock and a criminal."

Now that "The Breakfast Club" has become a teen movie classic, it's hard to believe it was ever viewed as a commercial risk. But before the movie was released film critic, Gene Siskel asked: "Will today's young audience sit still for a film that's virtually all talk? Do teenagers want to see an adolescent 'My Dinner With Andre'?" Siskel wasn't the only one who knew it was a gamble. Hughes himself warned his actors that the movie might bomb but that if it did they would have nothing to be ashamed of. "We have made a movie that will be around for a long time," he told Siskel. "Even if it doesn't do any business, we have documented a slice of life that normally doesn't get documented in the movies. It will live on ... We can be proud of this."

"The Breakfast Club" is basically plotless, an action-free drama about abstract themes like teen identity and social dynamics. As it begins, principal Vernon -- the embittered detention underlord, the classic authority figure -- tells the kids to write an essay describing who they think they are. His assignment is an echo of that favorite adult demand: "Who do you think you are?" It's a rhetorical question that usually implies some version of the answer "You're just a kid. What do you know?" But any kid who's asked knows the real, often unspoken, answer: "I know what I experience; I know I am someone you don't understand." The characters seem to forget about the assignment until the last few minutes of the movie, yet they spend the entire detention period exploring the topic. They define themselves as part of certain cliques, as members of certain clubs, as children of difficult parents, as different from each other, as similar to each other.

For these kids, what goes on at home is a lot more significant and formative than what happens at school. And "The Breakfast Club" recognizes all kinds of domestic dysfunction and child abuse, from the subtle to the blatant. Judd Nelson's character, Bender, has his dad to thank for a cigar burn on his arm; and though the moment when Bender announces this to the room is almost maudlin, Nelson's performance and a challenge from Andy (Emilio Estevez) that Bender prove it make the scene snap with tension and rage. The effect is at least as visceral when Andy cries as he talks about his dad's relentless pressure on him to be the best, and when Andy asks Alison (Ally Sheedy) what her parents do to her and she whispers, "They ignore me," as tears well up around the thick black eyeliner she wears. By talking about their parents, the kids relieve some of the pressure and pain they feel. They also mature a little by recognizing they are not the only ones who have unhappy homes -- and that their pain is helping to make them the people they are.

Hughes was able to capture the youth Zeitgeist on-screen in part because he talked to the teenage children of colleagues and relatives, asking them what they thought of his scripts and generally treating them like underage consultants. When Siskel asked him what he had observed about his young friends, Hughes said, "Many filmmakers portray teenagers as immoral and ignorant with pursuits that are pretty base ... [as not] very bright. But I haven't found that to be the case. I listen to kids. I respect them ... Some of them are as bright as any of the adults I've met ... The other thing that many filmmakers miss is that a lot of kids are very conservative about sex."

Later in 1985, Hughes started shooting "Pretty in Pink," which he wrote the week after wrapping up "Sixteen Candles." He had Ringwald in mind for the lead after she told him she liked the eponymous song by the Psychedelic Furs. Though "Pink" was the first Hughes movie actually inspired by a pop song, in his earlier films Hughes expertly matched scenes with the kind of rock 'n' roll songs that, then and now, make up the soundtrack for every American kid's personal drama about growing up. Hughes' movies helped bands like the Furs and Orchestral Maneuvers in the Dark find fame as much as they shone the spotlight on some of the best and brightest young acting talents of the '80s: Hall, Ringwald, Nelson, Sheedy, Estevez, Andrew McCarthy, Eric Stoltz and John and Joan Cusack, to name a few. (He also, incidentally, launched Macaulay Culkin's career.)

The plots of "Pretty in Pink" and its follow-up, "Some Kind of Wonderful," aren't startlingly original. In "Pink," Ringwald is the poor little poor girl Andy, who gets romanced, spurned and then reunited with rich-but-sensitive guy Blaine (Andrew McCarthy); a brilliantly funny Jon Crier plays Andy's best friend Duckie, who is also in love with her. In "Wonderful," Keith (Stoltz) wants to win over beautiful Amanda Jones (Lea Thompson) so badly that he overlooks the fact that he might be in love with his best friend Watts (Mary Stuart Masterson), who is definitely in love with him. What makes these movies resonate is not story so much as Hughes' respectful and candid treatment of his characters. When Duckie tells Andy, "I live to love you," anyone who has ever had a crush feels his anguish. Anyone who has ever been passed over or dumped understands why Duckie grabs Iona (Annie Potts in a crackpot role) and kisses her in the hopes of making an onlooking Andy jealous. Hughes also knows that the socioeconomic aspects of the schoolyard make for some of the most loaded emotional material. In another scene in "Pretty in Pink," Blaine can't understand why Andy won't let him drop her off at her house. Finally she blurts out, "I don't want you to see where I live, OK?"

Had Hughes started his career in 1988, he would probably never rank as an exceptional filmmaker because in the time since, though he's made plenty of blockbusters and many really funny flicks, like the first "Home Alone," he hasn't done much with staying power or impact. But the quartet of movies he made for teens growing up in the decade of greed has yet to be beat. He has influenced every filmmaker putting out work for that demographic since; director Kevin Smith went so far as to thank Hughes in the credits of his film "Mallrats" (1995) and centering the plot of "Dogma" (1999) around the main characters' quest to find the fictional town where a number of Hughes' movies are set, Shermer, Ill. "Everybody can relate to a good teen movie; it's more immediate [and] honest," Hughes told Lollipop. It's his candor that has made Hughes' greatest works relevant and resonant to kids, then and now, who have to do the hard work of growing up.