Falsely used as a Condit alibi -- and, she says, falsely smeared by the tabloids -- an ABC News reporter is surprised she still hasn't heard from D.C. police. 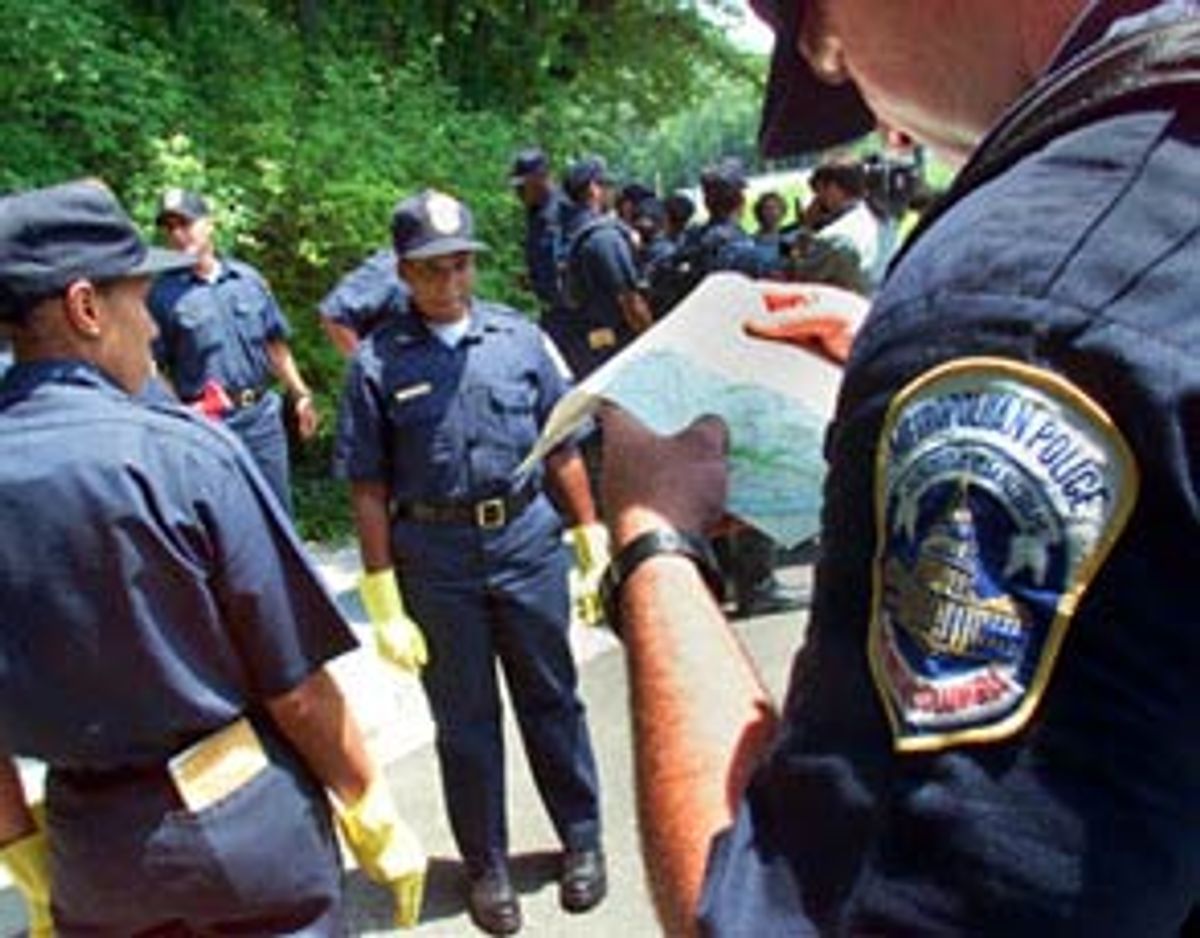 Washington police have yet to contact Rebecca Cooper, the off-air ABC News reporter whom staffers for Rep. Gary Condit, D-Calif., mistakenly identified as having met at a restaurant with the beleaguered congressman on May 1, the day that Chandra Levy was last heard from.

Cooper has confirmed to Salon that she was the reporter who met with Condit at Tryst, a restaurant/bar in the Adams Morgan neighborhood, in the late afternoon of May 2, to discuss the California energy crisis as well as Condit's three meetings at the White House that week. In a timeline drafted for the media, Condit staffers subsequently and erroneously reported that meeting as having taken place a day earlier, from 6:30 p.m. to 7:30 p.m. The error in the timeline certainly seems significant, since it purportedly creates an alibi for Condit on the day that Levy was last heard from.

On anything else having to do with the meeting, the erroneous report by Condit's office or the failure of the police to contact her, Cooper had no comment and referred questions to the ABC News public relations department. "She's not been contacted by any law enforcement authorities," confirms Su-Lin Nichols, a spokesperson for ABC News.

Cooper's admission comes on a day when D.C. police searched the heavy underbrush of Rock Creek Park a full 10 weeks after the department was told she was missing -- and yet she had left evidence on her computer showing that one of her last known acts was to have used a map search engine on May 1 to find the location of nearby Klingle Mansion. Though the police have searched the area around Klingle Mansion before, this is the first time they have conducted such a thorough search of the area.

It's another reminder that with the whole country watching, the D.C. police have consistently inspired something less than confidence.

Cooper, reports a source close to her, is "surprised" that she has yet to receive one phone call from the D.C. police to clear up this matter -- not to mention discuss with her Condit's behavior or state of mind the day after a woman with whom he was having an affair went missing.

The police's reaction? "First of all, I don't know if we know about that," said Sgt. Joseph Gentile, public information officer for the D.C. Police Department, when asked about the mess-up in Condit's schedule. "Second of all, why are you asking about Condit's state of mind? We're looking for Miss Levy, we want to know about Miss Levy's state of mind. Third of all, we don't identify the people we talk to."

Still, according to one former D.C. police sergeant, "Somebody should have interviewed her."

Among many at ABC News, at least, that has been the prevailing wisdom: Every day that passes without Cooper receiving a phone call from D.C. police raises eyebrows and questions among both Cooper and her colleagues about the thoroughness of the investigation. One week ago, on July 11, ABC News' Pierre Thomas reported on "Nightline" that "in the timeline, [Condit] says he meets with a reporter the evening of May 1 at a local coffee shop, from 6:30 until 7:30. That reporter, who works for ABC News, remembers the meeting taking place the next day. Condit's office immediately puts out a statement saying the timeline was only a draft. They still have not provided a corrected version."

"It's just basic 101 police work," says local community activist Dorothy Brizill, executive director of D.C. Watch, a local government watchdog group. "You wonder whether or not they get it. When it comes to MPD" -- the Metropolitan Police Department -- "they have been lacking in basic investigative skills for years.

"Just the other day on Sunday's programs, you see [Police Chief] Ramsey talking about the Internet traffic on her computer and you say, 'Wait a minute! Did he just learn this?' and you just scratch your head," Brizill says. "Anyone who has any familiarity with D.C. police will tell you the lack of professionalism, the lack of skills."

Critics also wonder why it took D.C. police until their third interview with Condit, on July 6, to get him to admit the nature of his relationship with Levy when they had been told early on about the affair by Levy's aunt, Linda Zamsky. They wonder about the low-rent computer-generated composite photographs of Levy with different hairstyles that look like they were put together by a 10-year-old with a scissors, Elmer's glue and a stack of old People magazines from the 1970s.

They wonder about why it took D.C. police 10 weeks before asking Condit to submit to a voluntary search of his home.

"No, we hadn't asked for a voluntary search," Ramsey told "Nightline." "That issue had not come up."

On NBC's "Meet the Press" last Sunday, Tim Russert asked Ramsey about the timeline confusion: "Have you ever asked the congressman to establish exactly what he was doing on May 1?"

"Well, those are all the kinds of questions that we still need to have answered if we're going to have a polygraph examination," Ramsey replied. "Those are the kinds of issues that we need to kind of lock down. Certainly one could forget the exact date of something. It could just be a mistake, but it could be something more than that. Again, we're not focusing all of our attention on Congressman Condit. We are taking and exploring a lot of different avenues here."

"But did you ask him specifically what he was doing on May 1?" Russert pressed.

"We have tried to verify timelines, yes," Ramsey said.

Without naming Cooper, tabloids have insinuated that she had something other than a platonic relationship with the congressman in the past. The New York Post blared a headline "ABC reporter dated Condit," and while pretending to shy away from naming her, wrote "it is known she worked for U.N. Ambassador Bill Richardson when he was asked to give Monica Lewinsky a job" -- a dead giveaway in Washington's small media town.

Cooper, however, strongly denies she ever had such a relationship with Condit. Her boss, ABC News, denies the relationship as well.

No evidence has ever surfaced to suggest otherwise.

According to the source close to Cooper, she met with Condit at his Rayburn House Office Building on May 2 at around 3 p.m. After Condit was finished voting for the day, he and Cooper took a cab over to Tryst, arriving at around 4:15, where they discussed the efforts the White House was making to reach out to him, as a conservative "Blue Dog" Democrat, especially on energy policy.

Vice President Dick Cheney had met privately with Condit for 45 minutes the day before, for instance.

They left at approximately 6 p.m.; Cooper returned to ABC, wrote a memo about the meeting that she circulated among her colleagues and then left to meet some reporters for drinks.

On June 29, however, Condit's office released a timeline of his whereabouts for the week during which Levy was assumed to have disappeared. ABC News reporters who had received Cooper's May 2 memo were surprised to see their colleague's meeting listed on the timeline as occurring on May 1. Cooper informed them that Condit's office was mistaken.

When asked about possible inconsistencies in the timeline, Condit's press spokeswoman, Marina Ein, said, "I have no comment about that."

The thoroughness and competence of the D.C. police have been questioned throughout its investigation into the Levy disappearance. But it was also questioned just last fall. A December 2000 study by the Washington Post revealed that "(n)early two-thirds of the homicides that occurred in 1999 remained unsolved at that year's end, the poorest performance in the last 10 years." Homicide investigations in D.C. have, according to the Post, "an arrest rate that has fallen sharply lower than that of other cities."

Said the former D.C. police sergeant, "I don't have confidence in the homicide office as a whole. Certain homicide detectives are conscientious and proactive but they're the exception to the rule."