In a major embarrassment for the White House, Republican rebels in the House derail the faith-based initiative. 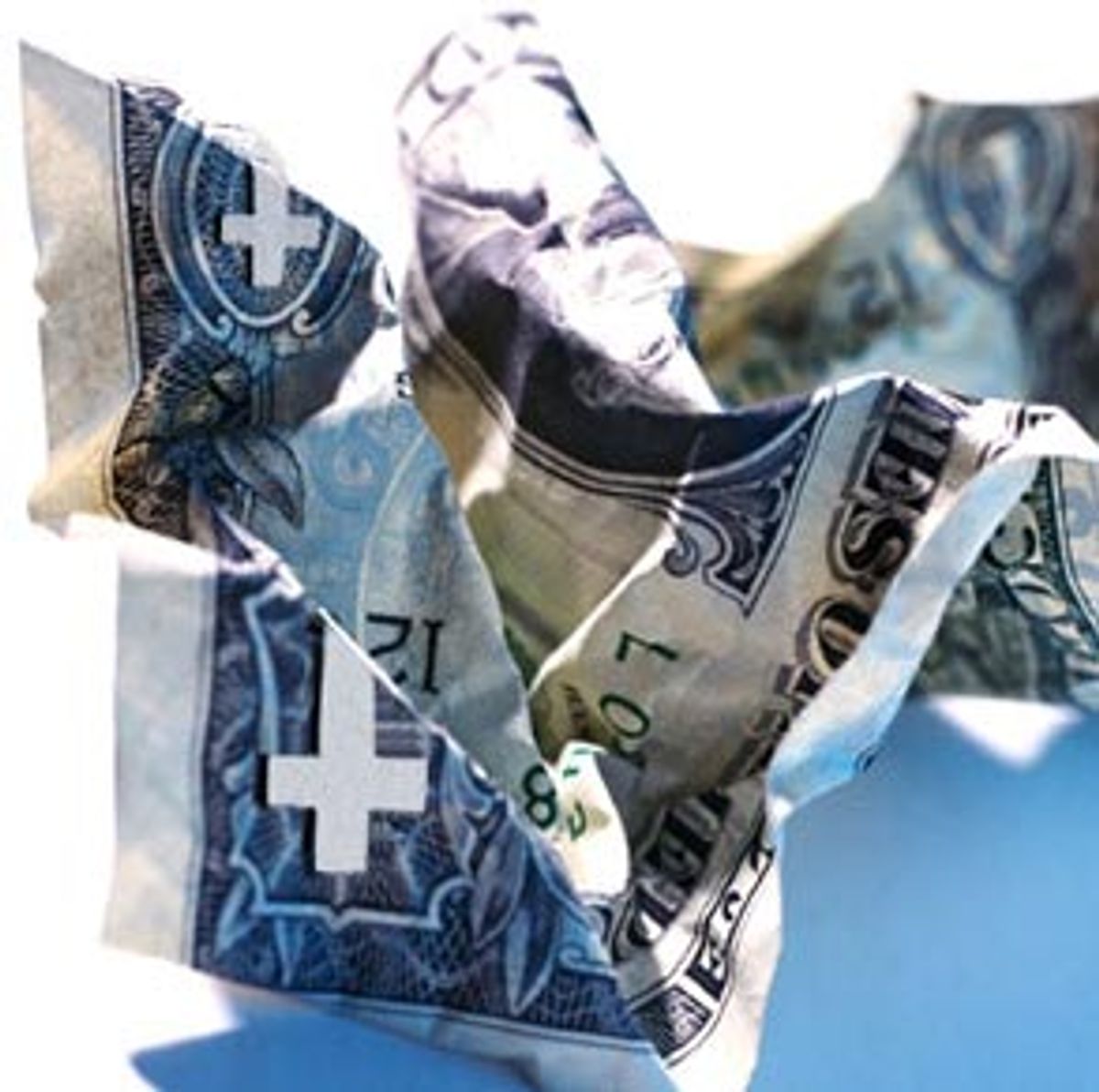 In another slap at President Bush's agenda, a group of perhaps 15 or so moderate Republicans staged a minor revolt in the House of Representatives Wednesday, temporarily derailing one of Bush's top legislative priorities by threatening to join with Democrats unless the bill drops a provision critics describe as threatening civil rights.

The moderates, led by Rep. Mark Foley, R-Fla., objected to provisions in the faith-based initiative bill that would allow religious charities that receive federal dollars to override state and local nondiscrimination laws. The resulting brouhaha caused the GOP House leadership to put off a vote on the bill, for fear they would lose the vote.

The fracas began Tuesday night, when Foley tried to offer an amendment to the faith-based initiative bill offered by Reps. J.C. Watts, R-Okla., and Tony Hall, D-Ohio. But in a 9-4 vote in the House Rules Committee, Foley was denied the ability to introduce his amendment.

Foley's amendment would have stripped the bill of the provision that would allow religious charities that receive federal money to violate local and civil rights laws in their employment practices. Federal law currently exempts religious organizations from nondiscrimination laws, but they are not so exempted for secular positions in their affiliated charities. The Watts-Hall bill would change this, and many charities desire such a change -- as illustrated in last week's controversy involving the Salvation Army's lobbying of the White House for such a change in exchange for support for the faith-based bill, as first reported by the Washington Post.

Foley, who represents a Democratic-leaning congressional district that includes a third of liberal bastion Palm Beach County, said that the bill, "as presented to the full House, would have the unintended consequence of superseding existing state and local laws that prohibit discrimination. It is crucial that we ensure that faith-based services are accessible to all Americans."

Under the provisions of the bill, Foley said, "a local Catholic Church would not be forced to hire a gay minister or assistant if they chose to accept federal funds and operated a charity in a jurisdiction with a civil rights law that covered sexual orientation." On the other hand, he said, "federal policy should codify that the charitable arm which collects government funds should not be allowed to discriminate in their hiring practices or the delivery of services to those who need it most."

The Watts-Hall bill would allow religious charities to compete for federal grants, and these organizations would be allowed to make employment decisions based upon the tenets and teachings of the religion, opening up a veritable Pandora's box of possible scenarios. Would, for instance, a Bob Jones University-affiliated charity, supported by federal tax dollars, be permitted to fire an employee for interracial dating?

The Senate bill avoids this and other sticky matters by focusing on billions in tax breaks to encourage charitable giving. The House bill contains this provision, too, but the House Ways and Means Committee presented a version of this part of the bill that substantially reduced the amount to $6.3 billion over 10 years from Bush's proposed $82 billion over the same period.

In early June, Salon reported that John DiIulio Jr., the Catholic Democratic academic drafted by Bush to head the White House Office of Faith-Based and Community Initiatives, was privately expressing a preference for the Senate version of the bill since it didn't contain such controversial measures. DiIulio was said to have feared that the House version was too controversial to become law.

"DiIulio has expressed concern that the more the House bill becomes perceived as the president's bill, the greater the likelihood that this whole enterprise is just going to blow up," a Capitol Hill source deeply involved in negotiations on the faith-based initiative issue told Salon in June. "He knows the House bill has several radioactive provisions."

DiIulio never commented on the Salon story, but he appears to have been right; a small but significant team of GOP moderates opposes allowing religious charities an exemption from nondiscrimination laws. And while the White House was wooing eight or so moderate House Democrats to its side Tuesday night on the eve of the vote on the bill, others were peeling off from their own party.

At a House GOP caucus meeting Wednesday morning, Rep. Chris Shays, R-Conn., rose to ask a question of Rep. Jim Sensenbrenner, R-Wis., the chairman of the committee where the bill was drafted, the House Judiciary Committee. Shays supports Foley's amendment, which would deny faith-based charities the ability to override state and local nondiscrimination laws.

Shays, according to a source close to him, pressed Sensenbrenner why Foley was not allowed to introduce his amendment, and asked why Republicans would want to dictate to states.

Rumors swirled around the Capitol that Shays had accused Sensenbrenner of having misled the GOP caucus on what was in the bill, but aides to both Shays and Sensenbrenner denied such an exchange.

"My understanding is that Mr. Sensenbrenner answered all of the questions," says Jeff Lungren, a spokesman for the House Judiciary Committee. "Nothing has changed in this bill. We marked this thing up three weeks ago. It's not like this was sprung upon people." According to a Democratic leadership aide, on Wednesday morning, right before the vote on the faith-based initiative was to take place, Foley spoke to Rep. John Conyers, D-Mich., the ranking Democrat on the House Judiciary Committee. Foley told Conyers that he and 15 or so other Republicans were going to join with the vast majority of Democrats and vote to recommit the bill, sending it back to the Judiciary Committee for changes.

Before that vote could happen, however, Foley alerted the Republican leadership that they didn't have the votes to pass the bill, one of Bush's top four legislative priorities.

"We're ready to go forward with it," Sensenbrenner spokesman Lungren said on Wednesday afternoon. But that seems debatable, at least as of Wednesday evening, when Foley and Rep. Jim Kolbe, R-Ariz., one of the few openly gay members of the House, were seen arguing heatedly with GOP leadership staffers.

The moderates' opposition appeared to have come as a complete surprise to House leadership. Watts told the Boston Globe just Tuesday that "we will have enough votes to get it passed."

But he didn't, despite the lobbying by the White House. Describing how active Bush has been in drumming up support for the faith-based initiative, White House spokesman Ari Fleischer told reporters on Monday that Bush has "been talking to a number of members of Congress about it ... And as you know, he's traveled the country with members of Congress. Tony Hall, an Ohio Democrat, a very important supporter of the president's initiative. You know he went up to Philadelphia, of course, on July 4, and met with the constituency that's very dedicated to having new ways of solving old social problems."

The bill also comes at an embarrassing time for the House leadership, suffering as it is from defeats on campaign finance reform and various environmental measures in the past few months. Last week, 19 Republicans defected and voted with Democrats against the House GOP leadership's rule on the campaign finance reform offered by Shays and Rep. Marty Meehan, D-Mass. Supporters of the bill said that the rule would have created a complicated mess for reformers, splitting the bill up as it did into 14 different parts. After being defeated on the rule, House Speaker Dennis Hastert, R-Ill., exercised his prerogative as speaker and pulled the bill from the floor altogether.

As of Wednesday evening, it was unclear what would happen to the bill. Many speculated that the issue was too important to the president for the House leadership not to try to cobble together a compromise to get the bill passed.

"Tuesday, as everybody's writing their story about how the bill is sailing through the House, I realized that there were enough members undecided 24 hours before the vote to possibly make a difference," said the Rev. Barry Lynn, executive director of Americans United for Separation of Church and State, which opposes the bill.

The White House did not return a call for comment. But on Monday, Fleischer gave a peek at how in-touch the administration is with moderate Republicans in the House.

A reporter asked Fleischer if last week's flap involving the Salvation Army's request for exemptions from nondiscrimination laws did "any lasting damage to the faith-based bill?"

"Well, I think you'll find out on Wednesday, with the vote," Fleischer said. "I think if it passes, the answer will obviously be no. But, again, I'm not aware of any such repercussions."

Foley says that the number of Republicans who question the bill's overriding of state and local law "could run as high as 30 or 40," but that when the GOP leadership's "whipping" is factored in, as well as the unknown number of Democrats who might support the bill, "a safe estimate" is 15 Republican defectors.

John Feehery, a spokesman for Speaker Hastert, puts the number "closer to five," which could still be enough to defeat the bill. Both Feehery and Foley say that a compromise is being hammered out. Feehery says that the bill will be voted on Thursday "and will win," and that Foley's amendment will be permitted to be introduced in another bill sometime soon.