What's wrong with the music biz?

Napster's out of the picture, but for the first time in a decade, album sales are down -- and ticket sales are sagging too. 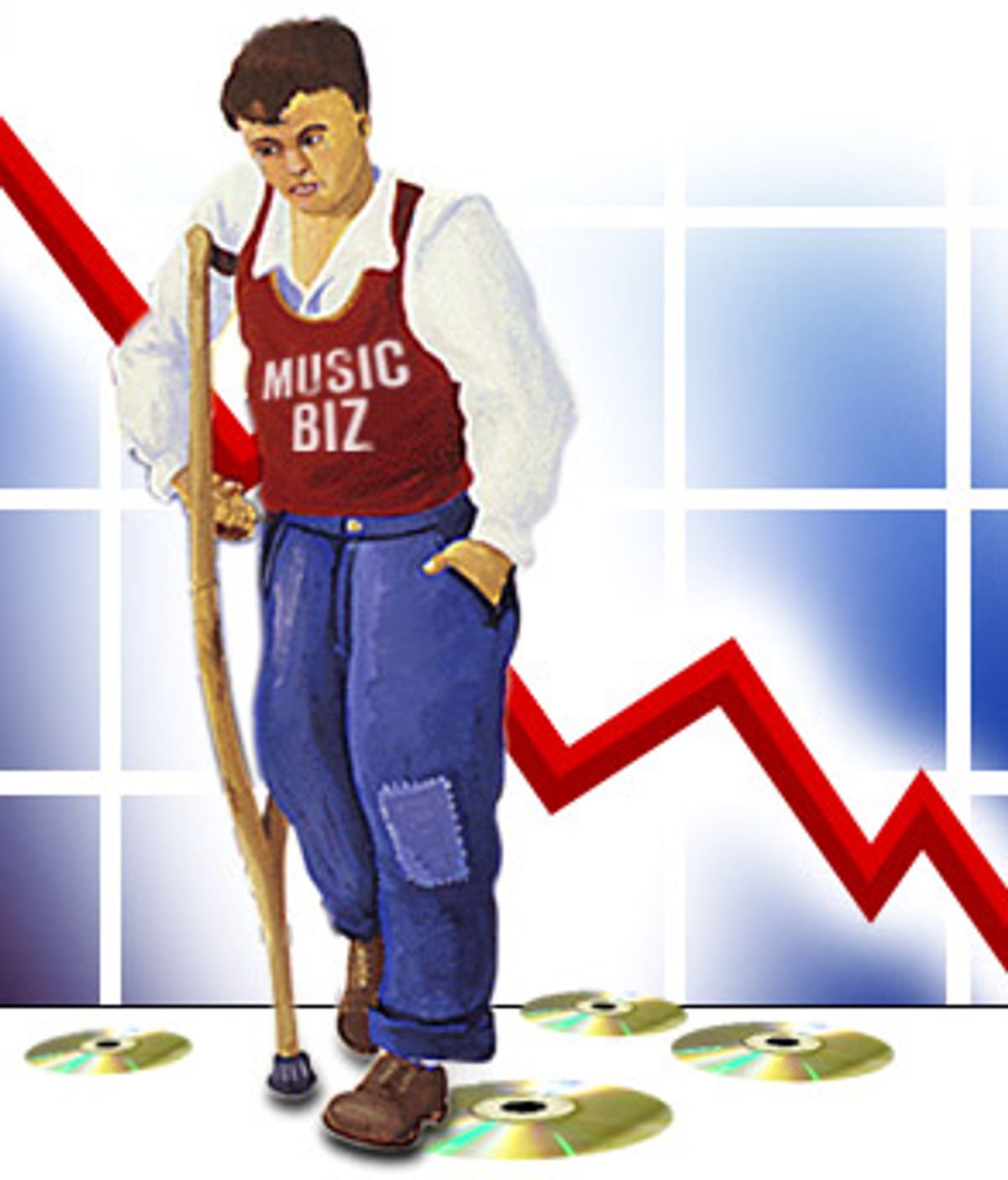 With the scourge of Napster -- now in the throes of a mercilessly slow demise -- nearly behind them, you'd think that the nation's music-industry executives would be able to relax.

Too bad that their traditional cash cows of CD sales and concert tickets (the businesses most of them grew up on) are both looking a little gaunt.

Or, as renegade bluesman R.L. Burnside might put it, "It's bad, you know."

Taken together, recent CD-sales and concert-ticket surveys paint a bleak picture of an industry grappling with change, but not the technological kind.

"What we're seeing is a downward trend of the business," says one industry veteran from the touring side. "It's continuing to implode. And folks don't really have a clue. The leadership at labels, senior management of the business, doesn't have a clue where the industry is going, tech issues aside."

Why the gloom? For an industry that's been able to bank on year-to-date sales increases, business through the first six months of this year was down 5.4 percent, according to SoundScan. (SoundScan is the system, introduced in 1991, that measures album purchases at their point of sale, giving the industry precise sales figures for the first time.)

The once-thriving format of singles continues its free-fall collapse; but even if you subtract singles from the equation, album sales -- the industry's real bread and butter -- were still down 3 percent. If that trend continues, 2001 will mark the first year since SoundScan's inception a decade ago that album sales have declined from one calendar year to the next.

At this point last year, sales were up nearly 8 percent over the previous year. Worse, this year sales of current releases -- that's not counting older catalog material, just albums released within the past 18 months -- are off 8 percent for the first six months of the year.

Just look at how many copies, combined, the top 10 sellers this year have sold: 22 million. Now compare that with the same combined sales for last year's biggest 10 hits through July: 36 million. (To be fair, early 2000 basked in the release of blockbuster albums by Britney Spears, Eminem and 'N Sync.)

Of course there have been success stories this year. Groan rockers Staind, guitar upstarts Linkin Park, the mainstream Train and R&B juggernaut Destiny's Child continue to sell well. And newcomer Alicia Keys, whose debut, "Songs in A Minor," is now the country's bestselling album, shows early signs of developing a lasting career.

But the misses continue to pile up; thong aficionado Sisqo, teen pinups Jessica Simpson and Mandy Moore, grunge holdovers Stone Temple Pilots, country superstars Tim McGraw and Trisha Yearwood, and classic rockers Aerosmith and Rod Stewart are just the most recent examples of platinum-selling acts who have not been able to hang onto their audiences with their latest CD offerings.

"Retail segments have been soft for 18 months," reports Don Van Cleve, president of the Coalition of Independent Music Stores. Sales at indie, or "mom and pop," stores are down 12 percent this year, according to SoundScan.

The big music chains are feeling that sluggishness as well, which explains why venerable CD seller Tower Records, with nearly 200 stores worldwide, is battling creditors to avoid a bankruptcy filing. The company posted $34 million in losses during the first quarter. Like all the major music retailers, Tower has been hurt by disappointing sales as well as stiff competition from mass-market retailers like Best Buy and Target, which sell CDs on the cheap in order to build foot traffic.

But don't soft CD sales simply reflect the sluggish economy that's been battered by layoffs? Perhaps, but movie-ticket sales, by contrast, were up nearly 10 percent in the first half of this year. Besides, the music industry in the past has bragged that it was recession-proof -- music, industry boosters said, offered consumers an entertainment escape for a small price.

But right now, consumers are cooled out on CDs. The question is who will jump-start sales for the third and fourth quarters. Some inside the industry pin their rebound hopes on Michael Jackson's comeback attempt, slated for later this year. Jackson can't be summarily dismissed, of course, but the fact that the industry is looking for relief to a 10-years-absent performer with a horrible public persona speaks for itself.

Speaking of fickle audiences and challenging public personas, the latest from pop rapper and impresario P. Diddy, formerly known as Puff Daddy, debuted Wednesday at No. 2 on the pop charts, behind Keys, selling 187,000 copies. That's a shaky showing for a performer who churned out million-sellers just a few years ago.

Others suggest new CDs by 'N Sync in July and Mariah Carey in August will ignite consumer passions. One year ago 'N Sync's album "No Strings Attached" broke all sales records when more than 2 million copies blew out of stores in its first seven days. (The album has since been certified platinum 12 times.) Yet the boy-band bubble is showing some signs of wearing thin. After two months at radio, 'N Sync's latest single, "Pop," has already peaked (it stalled at No. 19) and has been falling down the Billboard Hot 100 chart for weeks.

'N Sync's single "has not been the Pied Piper, but that doesn't mean they can't turn it around," says Geoff Mayfield, chart guru for Billboard. "Pop" topped the countdown on MTV's popular "TRL" request show this week, but by the time 'N Sync's album "Celebrity" hits stores next Tuesday "Pop" may already have dropped out of radio's top 50. And the truth is, it's radio singles, not television videos, that drive the bulk of CD sales.

That's better than poor Carey. On the eve of the release of "Glitter," her first album since leaving Sony Music (and her former husband, Sony Music chairman Tommy Mottola), the sultry singer's new single, "Loverboy," is a bona fide stiff, currently at No. 61, five weeks after it was shipped to radio. (The single is so forgettable it was trashed by the review-friendly editors at Billboard.) Meanwhile, her video clip is quickly fading from MTV's rotation.

In the wake of the Napster debate, an argument could be made that savvy consumers are simply no longer doling out cash for CDs. They're still devouring new music at a healthy rate, swapping files with friends, but it's just not showing up in SoundScan.

Could be. So why aren't they going to see live music either? When you factor in the weak concert-ticket sales -- you can't download the live experience of an encore -- the more realistic scenario is that the product, as music is referred to inside the business, just is not moving consumers.

Revenues from concert-ticket sales declined 12 percent from January to June, according to Pollstar magazine. Worse, a disturbing trend continues: Actual attendance dropped again in 2001, this time down 16 percent compared with the first six months of last year. (Ticket prices continue to go up, which explains the discrepancy between those two numbers.)

Among those who are not to blame for the concert downturn are U2, Madonna and the Dave Matthews Band. 'N Sync's monstrous tour continues to sell well, although the use of the phrase "sold out stadium tour" by the group's label Jive Records in a recent trade ad was rather liberal; walk-up tickets the night of the show have been available at virtually every stop along the way.

The losers? The summer's Paul Simon/Brian Wilson tour is a disaster, according to industry sources, as is the amphitheater tour by songstress Dido. Destiny's Child's MTV-sponsored tour is also in serious trouble. "The argument they're making internally," says one source, "is that's an urban [i.e., black] show and there will be lots of last-minute business." But if the thoroughly pop Destiny's Child are targeting their summer tour toward an urban audience they may be in trouble; the girl group was nearly booed off the stage at a recent radio festival show sponsored by New York hip-hop station Hot 97.

The escalating cost of concerts, however, is definitely a factor. It is symptomatic of the problem that the 7 percent increase in concert prices this year is a comparatively small one. By contrast, prices jumped 30 percent between 1998 and 1999. (The relatively low rise this year is attributed to the efforts of some young acts to keep ticket prices low.)

But that only takes into account the face value of the tickets. What continues to spin out of control are the add-on facility, parking and Ticketmaster fees. The last of these alone can add $8, $12, sometimes even $20 to each ticket purchased. (When Pearl Jam led their ill-fated crusade against Ticketmaster in the mid-'90s, service fees were roughly $5 per ticket.)

Some of that money ends up in the pockets of artists, but most of it goes to Ticketmaster and concert goliath Clear Channel Entertainment, formerly known as SFX Entertainment.

Clear Channel is busy trying to recoup the $4 billion it spent over the past few years essentially purchasing the American concert business lock, stock and barrel, snatching up concert promoters and venues across the country. Clear Channel, which runs tours by 'N Sync, U2, Destiny's Child and Janet Jackson, sold 35 million concert tickets last year. (The company is also the largest radio station owner in America, with nearly 1,200 signals nationwide.)

According to the Los Angeles Times, a lawn ticket purchased over the phone for the upcoming Barenaked Ladies show at Clear Channel's Verizon Amphitheater in Irvine, Calif., had a face value of $14.25. Yet after add-on charges, the ticket actually cost $29.70. That's right, the service fees cost more than the actual ticket.

Perhaps that's the perfect snapshot of the ailing music industry as it lurches through what might turn out to be a year to forget.