Bluegrass for the 21st century

The great Del McCoury Band looks backward and forward to bring a traditional music into the new millennium. 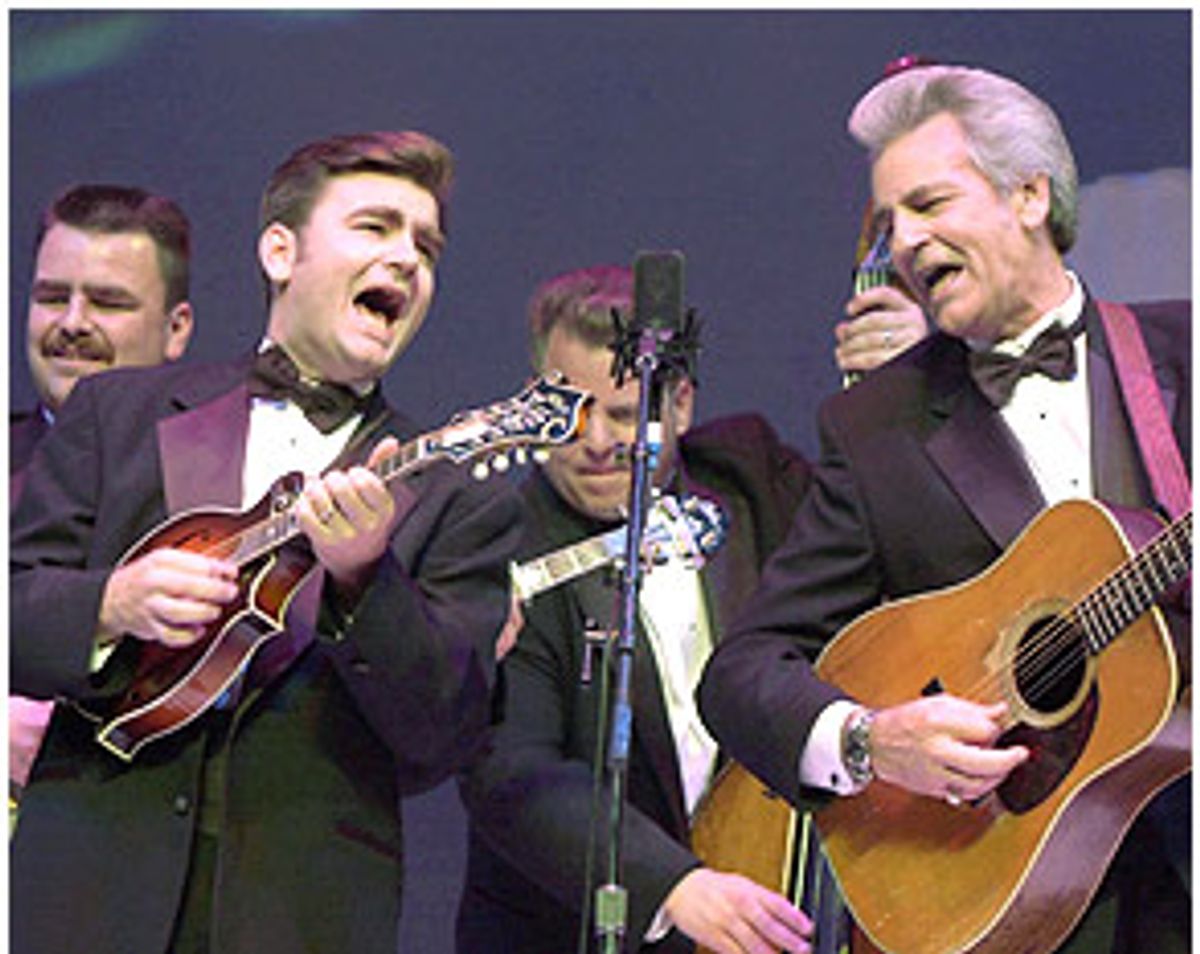 Toward the end of the Del McCoury Band's performance at the B.B. King Blues Club in New York last month, the normally boisterous establishment's crowd of 20-somethings and wayfaring soul fans sat in a hushed silence as the group unraveled the nearly whispered, five-part harmony on the old gospel chestnut "City of Stone," a song portraying a world without rest, solace or hope.

Suggesting a vision of devastation akin to that of Bob Dylan's "Desolation Row," or the Stanley Brothers' "Rank Strangers to Me," the band members sang, abandoning, for a moment, their expected musical virtuosity, and for all that moment seemed to be as much addressing their current brutal, hectic urban surroundings as reciting a hymn from their past.

The modernizing of traditional American musical forms is nothing new. Indeed, Dylan himself built most of his early career on it, and musicians from the Rolling Stones to Shelby Lynne have taken creative succor from plumbing the depths of early American blues. Few, however, have sought to bring early acoustic music to a new audience with such a traditionalist approach (and as much success) as Delano "Del" McCoury and his band of family and friends. With their aforementioned kick-ass instrumental chops (featuring Del on guitar, sons Ronnie and Rob on mandolin and banjo, respectively, Arizona native Mike Bub on string bass and Jason Carter on fiddle) and a penchant for unorthodox pairings (whether with country-rocker Steve Earle on 1999's "The Mountain" or onstage with DJ Logic at this year's Jammys at Manhattan's Roseland Ballroom), the band has managed to reach -- in less than a decade -- a level of musical eclecticism and daring matched by few players in any genre. The band's new album, "Del and the Boys," is a compelling mix of the groundbreaking and the familiar, and serves both to solidify their reputation as masters of the form and to point out new and compelling directions in the future.

Now an elegant, affable man in his mid-60s, Del McCoury was just a boy when he moved with his parents from the hills of North Carolina to Pennsylvania's York County, but the music he grew up with and loved was never far behind. Working alternately on a farm and at a logging job to support his family, McCoury still found time to delve into the bluegrass festival circuit before relocating to Baltimore and eventually landing a role as lead singer with legendary bluegrass master Bill Monroe in the early 1960s. "He just kind of taught by example, you know?" McCoury says about his time in apprenticeship. "He knew how to play that kind of music because he kind of invented it." Today, McCoury plumbs the depths of the repertoire from those days for inspiration, pulling out a somber cover of Monroe's "Get Down on Your Knees and Pray," or enlisting the band for a raucous "Heavy Traffic Ahead."

When the current band finally coalesced with producer Jerry Douglas for 1994's "Deeper Shade of Blue," notable for a great version of a Jerry Lee Lewis signature tune, "What Made Milwaukee Famous (Made a Loser Out of Me)," the songs and rhythm flowed free and easy, and that has remained the case ever since.

Although bluegrass as a whole hasn't been immune to the conservatism that has swept all forms of country music in recent years, the Del McCoury Band have consistently shown daring and innovative taste in material, as if to assert that the emotional resonance of bluegrass can go beyond lonesome winds and silver dew. Their new album, conspicuously, opens up with a searing version of British folk-rock legend Richard Thompson's "1952 Vincent Black Lightning," a song whose modern themes of love, lawlessness and death fit perfectly into the canon's more ornery side.

And by simply changing the identification of the song from "Vauxhall" to "Knoxville," McCoury transforms the number from Thompson's original paean to British mythologizing into a bluegrass standard. At the end, its main character, James Adie, lies dead, much like the protagonist of the bluegrass standard "The Knoxville Girl," another song drawn from the British Isles (originally having been titled "The Wentworth Girl"), albeit from a much more ancient source.

This same adventurous spirit brought them to "The Mountain" in 1999, their collaboration with Steve Earle, a record that in many quarters is credited with the current revival of interest in bluegrass in cities such as New York and San Francisco. While one might think a collaboration between the gentle, sunny McCoury and the (at one time) notoriously hard-living Earle would be as likely as, well, Elton John performing with Eminem, the record in fact has its roots in a dual gig at Nashville's landmark Station Inn, where Earle and the band were thrown together to perform a set in a typical example of Del's open-mindedness.

The album, featuring Earle's impeccable songwriting originals set to the McCoury Band's freewheeling bluegrass backing, was released to glowing reviews, and the subsequent three-month joint tour served a twofold purpose in breaking the band to a far larger audience than it had played to before (such as Earle's rock 'n' roll fans) as well as confirming Earle's comeback from the clutches of a drug addiction that had gripped him through much of the 1990s. "It did a lot for us, it did a lot for him at the time," Ronnie McCoury says.

Well-received appearances, both with Earle and solo, on PBS's prestigious "Sessions at West 54th" followed the album, as well as pivotal performances on both David Letterman's and Conan O'Brien's late-night shows. Consistently mentioned as favorites by artists as diverse as country singers Wynonna and members of Phish (with whom they played frequently), the band seemed, through its tireless touring, to be breathing new life into a style too often characterized by excessive reverence and monochromatic sameness.

What is it about this craggy, age-old music that people are responding to? Why does it seem to hold as much resonance for a bunch of jam bands and laid-off dot-commers as it did for Del's mother back in the misty reaches of the Carolina hill country?

"There's always been different blues, whether it's the delta blues or the mountain blues," Ronnie McCoury said shortly before the band's New York show. "Love, family, home -- you can't get away from songs like that. There's something in it for everyone to relate to." In fact, one of the standout tracks on the new record, a cover of Country Music Hall of Famer Cindy Walker's "The Bluegrass County," addresses just these issues.

"Lord, I'm lonesome for Kentucky," Del McCoury sings in his high, clear voice, at once as tangible and ephemeral as morning mist. "And the thought that she loves another is like a bullet through my heart." Beneath, Ronnie McCoury's mandolin shimmers and, above, Jason Carter's fiddle soars, evoking both the giddy deliriousness of love and reunion and the skittish possibility that everything might have changed after all.

Despite the song's surface buoyancy (for bluegrass musicians were among the first to realize that marrying a grim theme to an upbeat melody was one of the keys to a great song), there lurks, above all, a sense of unease that when the singer returns to what he once knew best, the world he used to know will have changed beyond recognition. In an age when companies come and go with the rise and fall of the stock market, and where today's 28-year-old millionaire "genius" can be tomorrow's financial and social pariah, is it little wonder that there would be an appeal to music that questions the viability of returning to the world we left behind?

Michael Deibert is a writer living in New York City. He last wrote for Salon about the 2000 elections in Haiti.