Throw the bums out!

It's time to eject baseball's owners for arguing balls and strikes. 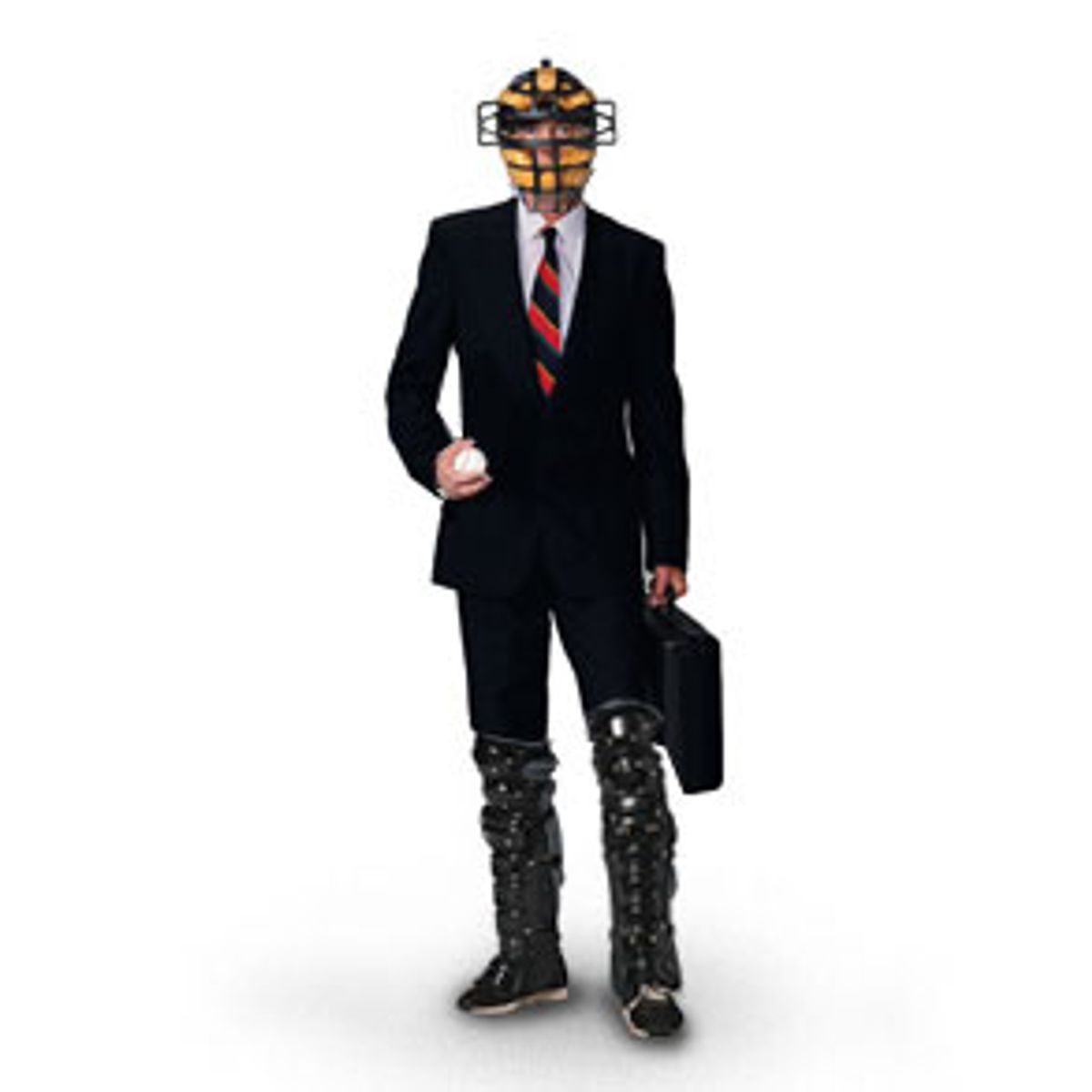 When exactly did the issue of balls and strikes become a matter for owners to decide? For at least 100 years, baseball has been telling us that however subjective a ball-and-strike judgment was -- there have been about 800 trillion balls and strikes called since the first pitch was thrown, and not one yet has been agreed upon by batter, pitcher, fans and ump -- there was nonetheless a standard that was supposed to be objective. In theory, at least, the umpire's call was sacred; he was, in the parlance of the game, supposed to call 'em as he saw 'em.

This is the owners' solution to baseball's "problems." Not the problems I have with baseball, and I'll bet not the ones you have, but their idea of the sport's problems. I won't speak for you, but for myself, baseball's problems are that tickets and hotdogs and beer cost too much, mostly because the owners have a monopoly on the last two; that it takes too damn long to get served at the stadiums, again because the owners have a monopoly and don't care how much of the game you miss so long as you spend money when your turn in line comes; that games, particularly playoffs and World Series contests, are on too late for young fans; and that rich teams like the Yankees and White Sox and Braves won't make a fairer split of monies with teams in smaller markets. The owners' perception of problems is that they have to pay the players too much money and that the games are too long and that the latter point hurts them in bargaining with TV people.

You see the failure to communicate here? If you, the fans, thought games were too long you wouldn't be buying tickets and attendance would actually be going down. But it isn't, it's going up, so someone has misinformed the owners on this count. The TV people, on the other hand, would like to have more of a clear idea that the games were going to come in under, say, three hours and 15 minutes, so that they could advertise and schedule more episodes of "Seinfeld" or whatever. Don't think for a moment that this has anything to do with accommodating fans.

Of course, all of that being said, the umpiring at the current major league level is, as any fan with a TV set can see, atrocious, and if the owners had intervened in an attempt to get all umpires to start calling the same strike zone -- that is, to simply enforce the strike zone that is on the rule books instead of being allowed to create their own subjective version of what a strike zone should be -- then they would have right on their side, and probably the press and public opinion as well. I can think of a very simple way of grading umpires: Have the players do it by secret ballot. The bottom 10 percent get released, or something like that. I mean, who better to know than the men whose success or failure depends on their calls?

The people who run the NFL Hall of Fame are a sneaky bunch, and far more clannish and secretive than even their baseball counterparts. The make their announcement about new members just before the Super Bowl, when no one from the media has the time or inclination to debate it, then induct new members early in August before the sports public begins to think about football. And so, this Aug. 3, once again Jerry Kramer will not be inducted into the Pro Football Hall of Fame and once again there will be no outcry, either from fans, or, sadly, from the sports press.

Jerry Kramer was a nine-time All Pro at football's toughest position, guard -- guards score higher on intelligence tests than quarterbacks, you know -- and has five championship rings from Vince Lombardi's Green Bay Packers. He was considered the best at his position in the league for a decade; he run-blocked for a rushing champion, Jim Taylor, and pass-blocked for MVP Bart Starr. He was prominent in two of the most famous championship games of all time. In 1962, subbing for an ailing Paul Hornung, he kicked three field goals and an extra point to beat the New York Giants in an arctic Yankee Stadium, and on an even more frozen field in 1967 he helped throw the most famous block in football history to help beat the Dallas Cowboys in the now legendary "Ice Bowl." What greater credentials could one possibly have for the Hall of Fame?

Unfortunately for Kramer, he was also intelligent enough to write a book, "Instant Replay," the biggest bestseller in football history, which, while not exactly "Ball Four," angered the old-fart NFL regime by daring to open the locker room to the general public. And that's the reason why, more than 30 years after the fact, one of the greatest linemen in football history is as shut out of football's Hall Of Fame as Pete Rose is of baseball's. If you remember Jerry as a great player and fine author, I urge you to make your discontent known to your radio talk show hosts, local sports editor and, most importantly, to the NFL.