A cop in a bus station threatened and harassed my innocent young employee. His crime? Reading Esquire. 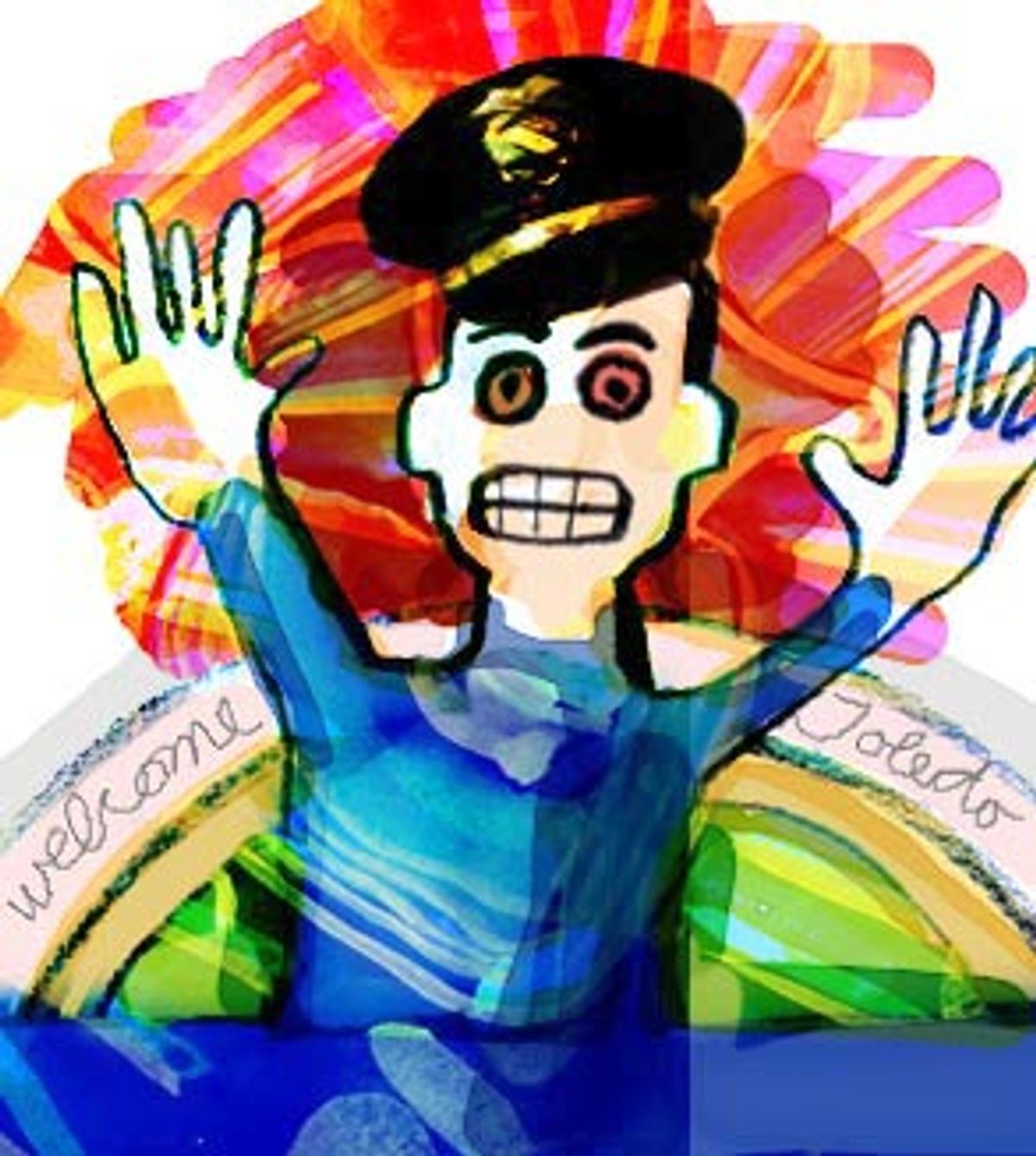 Last week, New York Times columnist Bob Herbert wrote a column titled "The Thought Police" in which he described the case of an Ohio man sentenced to seven years in prison merely for "thinking bad thoughts about children and writing them down in his private journal." Well, I have a story of my own.

It is a small story -- too small to make the news, but part of something too large to be ignored. My story also takes place in Ohio, where I write and where I live.

It began when our family's au pair, Sebastian Schmidt, set out from our home in Cleveland to visit friends in Detroit. He was traveling by Greyhound and had to change buses in Toledo, Ohio. And that was where it happened.

As he got off the bus in Toledo, weighed down by a huge green backpack, something fell from his hands. It was a sheaf of eight pages he had torn from a magazine to read on the long ride. He stooped down to gather up the fallen pages. As he stood up, he saw a policeman in a blue uniform standing over him.

The policeman, a patrolman, insisted that Sebastian show him the pages. Sebastian claims the officer was anything but friendly. It was Sebastian's first encounter with an American policeman and he was nervous and afraid. He comes from a small town called Poessnik in what was once East Germany, a place where police were once truly to be feared.

The officer scanned the pages sternly and declared them to be pornographic. He had Sebastian open up his backpack to make sure that there were no more offending materials hidden within, but there was only his diary, his wallet and a copy of the New York Times.

Once more the officer scanned the offending pages, shaking his head ruefully. Sebastian offered the only two defenses that came to mind. First, he explained, he was a foreigner.

"I don't know what the laws are in Germany," responded the officer, "but here it is against the law to read such materials in public."

Then Sebastian attempted to say that the materials were not pornographic, that they came from a serious magazine. They had been torn from the pages of Esquire magazine, from an article titled "How a Woman Ages." There were no pictures of buttocks or breasts, although the woman featured in the photos did cover herself up with her arms in one or two of the black-and-white shots. (If anyone was a scofflaw, it was my wife, for the Esquire subscription was hers.) There was also, in the thin stack of pages, a book review from the New Yorker. Apparently this was deemed lawful material as the officer took no exception to it.

For Sebastian, it was a bewildering experience. He is 20 years old and while taking care of our two sons, he had studied photography at a local community college. They had not warned him there of the dangers of such photographs.

If Sebastian were seen reading such materials in public again, warned the officer, he would be arrested. After some 15 minutes, he went on about his business patrolling Toledo's Greyhound bus station, while a shaken Sebastian sat down and tried to drown out his fears by listening to tapes on his Sony Walkman. (The officer did not ask him what tapes he was listening to.)

When Sebastian returned from his trip to Detroit three days later, he told this story to my wife and then to me. He had never been one to stretch the truth, but still I could not quite believe that things were precisely as he had said, so I called the Toledo bus station and spoke with the officer.

His name is Arrow Osborne. On the phone he was quite courteous, but he contradicted nothing Sebastian had told us. "That was material that was clearly borderline pornographic," he told me. "I'm sure it's acceptable in Germany, but it's illegal here in the United States."

Never in my three years of law school had I been introduced to the term "borderline pornographic." It seems the law of the land with regard to pornography is indeed "knowing it when you see it."

"It was a call that I made and I stand by it," said Officer Osborne. "There were kids in the area. One of the pictures shows a girl covering up her breasts. It's illegal to show pictures of breasts or buttocks. He had it out in the open and that makes it illegal."

Apparently, this was not the first time such a thing had happened. "I stop people all the time," said Officer Osborne, who explained that Greyhound encourages him to do so. I couldn't help wondering how many other Officer Osbornes are out there protecting us from ourselves.

On Sunday, we saw Sebastian off at the Cleveland airport, the first leg of his journey back to Berlin and then on to his home in Poessnik. I wondered if, when he changed planes at Dulles, he would be more careful about what he was seen to be reading. I shuddered to think what he would tell his friends and family in Germany about the America he found at a bus station in Toledo.