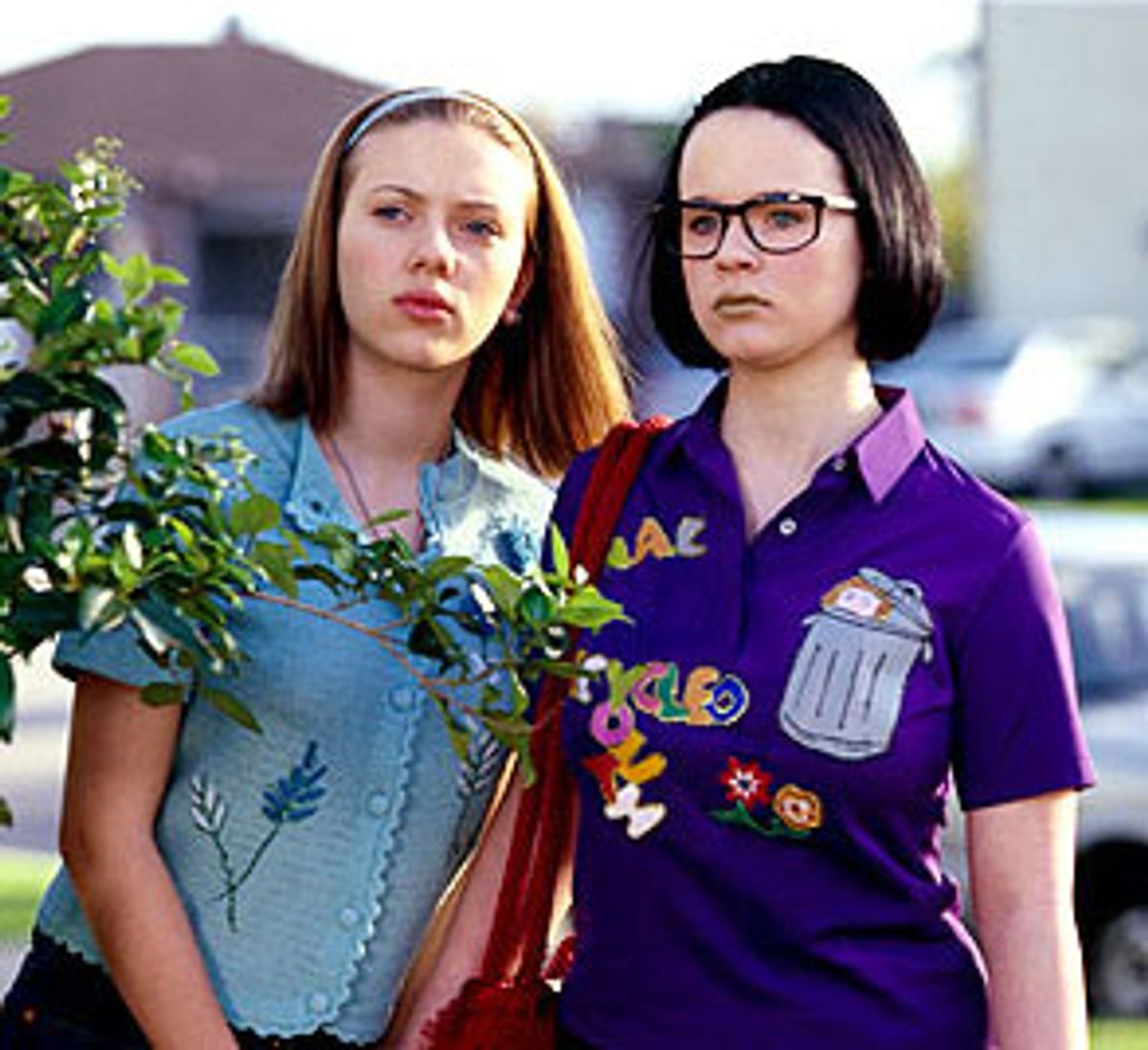 There's something inherently dubious, I guess, about a couple of middle-aged guys making a movie about the lives of two teenage girls, especially when one of the girls ends up sort of kind of having a thing with a middle-aged guy. But "Ghost World" is such a bittersweet comic delight, with a core of real seriousness and sadness, that such concerns don't matter, or almost don't. Based on the cult-fave comic book series by Daniel Clowes and directed by Terry Zwigoff (who made the unforgettable documentary "Crumb"), "Ghost World" offers an exquisite tour of the twilight zone between high school and the so-called real world, as well as between bohemian subculture and the even stranger culture of America at large.

Our guide is Enid (Thora Birch), a knowing, demanding and terribly lonely 18-year-old who's somewhere between Holden Caulfield, Elizabeth Bennet from "Pride and Prejudice" and the narrative voice of Dave Eggers' "A Heartbreaking Work of Staggering Genius." Enid is anxious, for example, for people to realize that her dyed-green hair, leather jacket and short skirt are a cultural quotation and not some pathetic attempt to be trendy. "It's obviously an original 1977 punk-rock look!" she spits at the obnoxious hipster dude from whom she buys 1960s Bollywood videos. Like everyone else in Enid's world -- even her best friend, Rebecca (Scarlett Johansson) -- the Hindi video guy hadn't quite picked up on the distinction.

Enid and Rebecca have finally graduated from high school, after sitting through a graduation speech by a classmate in a wheelchair that begins, "High school is like the training wheels for the bicycle that is life." Or rather, they almost have; Enid still has to make it through a summer school art class taught by a purple-clad performance artist (Illeana Douglas) who urges her students to "externalize the internals" and hopes to exhibit their work in a show called "Neighborhood and Community: Art and Dialogue." (Clowes, who co-wrote the script with Zwigoff, shares with Matt Groening and Mike Judge a keen ear for the bland, liberal banalities the adult world tends to offer teenagers.)

"Ghost World" is set on the west side of Los Angeles sometime right around now, but it could be almost any North American city at almost any time since the mid-'80s. Enid and the boyish, willowy Rebecca live to defy adult expectations, to torment their friend Josh (Brad Renfro), who works in a dismal convenience store and on whom they both halfway have crushes, to shop at thrift stores and garage sales, to hang out in an ersatz '50s diner and make fun of it ("Who could forget that great hit from the '50s?" asks Rebecca when a gangsta-rap song comes on the jukebox), to follow strangers around for no reason and pursue a private catalog of pranks and obsessions.

Or at least Enid thinks they do. She mostly misses the signs that her friendship with Rebecca, and their seventh-grade dream of sharing an apartment after high school, are starting to fray. Rebecca wants to live in a suspiciously normal neighborhood, wants to spend good money on brand-new plasticware from an actual store and confesses that a wholesome-looking blond guy who listens to reggae gives her "a total boner." When the victim of one of their mean-spirited practical jokes turns out to be a 40ish record-collector geek named Seymour (Steve Buscemi), the differences between them become even more apparent.

I watched "Ghost World" in a crowded Manhattan theater where the audience started laughing the first time Buscemi shambles into the fake '50s diner and didn't stop for 30 seconds or so. It was annoying, in-the-know New York behavior, but I could kind of understand it: It was laughter of recognition, not ridicule. The defeated but not quite hopeless Seymour is definitely a role Buscemi was born to play; he inhabits the character's baggy, styleless wardrobe, his apartment cluttered with vintage crap of all kinds and his hangdog expression with a ruthlessness born of understanding. Seymour has given his life to a set of obsessions he's no longer sure are noble; he might be willing to trade in his patented eccentricities for a normal life if there was anything about a normal life he could stand.

Seymour basically grosses out Rebecca, who has no difficulty attracting attention from supposedly normal guys, but Enid immediately recognizes him as a kindred soul. "He's the exact opposite of everything I completely hate," she says with a kind of wonder. Of course, the things Enid completely hates make up an awful lot of the world, from her dad's annoying girlfriend (Teri Garr in a cameo role) to smiley-face retail culture to pretentious Euro-art movies (we overhear a hilarious trailer for something called "The Flower That Drank the Moon") to "upbeat, extroverted pseudo-bohemians." Certainly the miserable, misanthropic Seymour, with his collections of 78 records and early-20th century advertising posters, fits none of these categories.

But Seymour is also stuck in middle age with no girlfriend and a middle-management job in the corporate office of a fried-chicken chain. Enid vows to get him a date, brightly suggesting that all they need to do is find somebody who shares his interests. "I don't want to meet somebody who shares my interests," Seymour grumbles. "I hate my interests!" Whatever label you might want to put on Enid and Seymour's budding quasi-relationship, it captures marvelously a particular kind of ambiguous real-life situation you hardly ever find in the movies. The two never talk about what is or isn't happening between them, or about the idea that it might seem weird for a guy in his 40s and an 18-year-old girl to hang out all the time.

To Enid's surprise, she actually succeeds in setting up Seymour with an age-appropriate real estate agent (Stacey Travis), who starts buying him antiques and stonewashed jeans. Abruptly, she finds herself cut off from both Seymour and Rebecca, as well as pilloried at the art show for her appropriation of one of Seymour's racist advertising cartoons. (This subplot, which seems to have dropped by from Spike Lee's "Bamboozled," is by far the clumsiest aspect of "Ghost World.") Enid wages a furious and perhaps destructive campaign to win back Seymour and to rescue her friendship with Rebecca, but Clowes and Zwigoff, to their credit, aren't interested in a romantic comedy whose oddball characters finally adapt themselves to bourgeois existence. The magic of "Ghost World" doesn't lie in its resolution -- it doesn't offer any. Instead it lies in its brittle, hilarious dialogue and the raw places beneath it (I've resisted quoting more of the jokes, since you really need to hear them for yourself) and in its lingering images of a girl, lonely and misunderstood (not least of all by herself), wandering the boulevards of Los Angeles with the lights of Winchell's and Radio Shack behind her.

No one who saw "American Beauty" will be surprised by Birch's measured, commanding performance as a character whose arrogance can't hide the fact that she couldn't possibly be less sure of herself. Maybe the real surprise here is the sudden emergence of Zwigoff as an accomplished narrative filmmaker. Until now he had been known as an eccentric perfectionist who had made just two documentaries in 15 years: "Louie Bluie" in 1985 and "Crumb" in 1994. Certainly the latter film had some of the qualities that make "Ghost World" so memorable: a blend of cultural satire and visual poetry, along with a profound fellow feeling for obsessives, compulsives and maladjusted searchers for authenticity. Zwigoff knows that the Seymours and Enids of the world are capable not only of surviving but of thriving. He also knows how long their search is likely to be.