By going its own way on biological weapons, Kyoto, missile defense and a growing list of global issues, the Bush administration is turning the United States into a pariah. 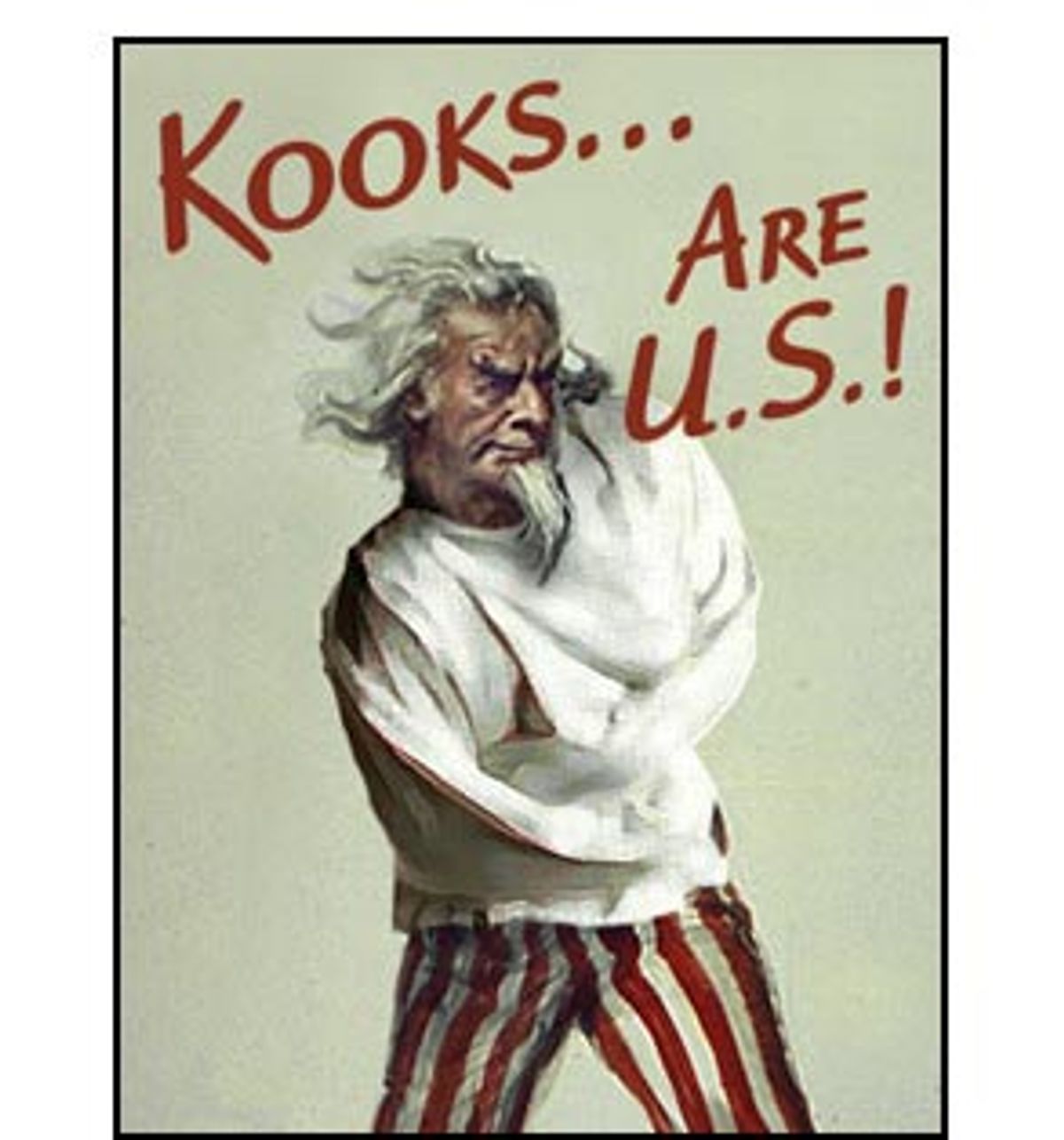 This week the City Council of La Verkin, Utah, was forced to reconsider its recent ordinance that banned residents from flying United Nations flags, and required anyone who worked for the U.N. both to post notices advertising their infamy and to file reports on same with City Hall. The councilors had been warned that they were open to First Amendment lawsuits on freedom of expression. Faced with a choice between their principles and a hike in taxes to pay the lawyers' bills, they backed down.

Even so, despite this brief moment of lucidity, the city fathers left intact local laws that declared La Verkin a U.N.-free zone, and banned the U.N. from taxing the city or stationing U.N. troops there. They categorically forbade the flying of the U.N. flag from the City Hall flagstaff. The Associated Press quotes Eliot Hill, clearly one of the few voices of sanity among the 3,300 La Verkin residents, as saying, "All this does is make us look like a bunch of kooks."

Which is pretty much the same effect the Bush administration is having on the rest of the world. Although it continues to bomb Iraq to enforce admittance of chemical and biological warfare inspectors, the U.S. told its shocked allies this week that it would have no truck with a new inspection regime designed to enforce the 1972 convention banning biological weapons. The U.S. had signed the treaty under President Nixon, and the signatories have tried to work out how to enforce it ever since, but now Bush renders it totally ineffective.

This is just the latest example of toxic diplomacy. In Bonn, Germany, last week, the U.S. stood alone while the rest of the world, including even opportunistic Tokyo, signed up for enforcement of the Kyoto Protocol on emissions. As Bush's home state of Texas recovered from the recent massive floods that are a symptom of global warming, one would have expected a little more constructive engagement. But no, as with the biological weapons inspection battle, the administration contented itself with rejecting painstakingly negotiated agreements on which the U.S. had a major input, but had not made a single counterproposal.

But there is consistency here: The U.S. has not so far signed or ratified the International Convention on the Law of the Sea or the International Land Mines Treaty, either. Meanwhile, it has signed but not ratified the Comprehensive Nuclear Test Ban Treaty, as well as U.N. protocols against child soldiers and child pornography.

Other embarrassments have gotten less attention. Two weeks ago, the Bush administration sent John Bolton, undersecretary of state for arms control and international security affairs, to represent it at the U.N. Conference on Small Arms. Bolton ensured that the agreement emerging from the conference allowed governments to ship arms to freedom fighters. In fact, he seemed to be trying to make the Second Amendment of the U.S. Constitution -- the right to bear arms -- into a global principle.

Clearly, this is just what Africa needs at a time when everyone agrees that small arms are killing a couple of Hiroshimas' worth of victims a year. But Bolton defended freedom fighters like the Nicaraguan Contras and Afghanistan's mujahedin as heroes wrestling against "oppressive regimes." Of course, some people regard Hamas, the Palestine Liberation Organization and Hezbollah the same way, which is why Israel opposed the agreement. No doubt Afghanistan's Taliban will regard Osama Bin Laden's activities against U.S. embassies as covered by the Bolton amendment. We can draw some comfort from the fact that there is apparently one lobby that can trump the powerful American Israel Political Action Committee -- even if it has to be the National Rifle Association!

Other delegations were less sanguine: There was much rolling of eyes and twirling of fingers in the vicinity of where most people keep their brains to indicate what they thought of the U.S. position. Bolton must be in the running for getting the keys to the great city of La Verkin. Many U.N. delegates wondered why he hadn't been locked up. He had spent many years as the official U.N. baiter for the Heritage Foundation, which was once regarded as kooky and beyond the pale until its views became official policy. Even America's best friends, like Britain, were impelled to warn against pandering to "unfounded fears spread by powerful lobbying organizations."

Not signing or ratifying treaties is bad enough, but with tests of its national missile defense, the Bush crowd is provocatively and deliberately setting out to unilaterally break a treaty that the U.S. has signed and ratified. They could test it in the mid-Pacific, but the tests in Alaska are a calculated breach of the agreement.

With behavior like this, it is not surprising that the Bush administration is also trying to "unsign" the convention setting up the International Criminal Court, although the U.N. itself has had no more official notice from Washington than it has had from La Verkin. President Clinton signed the convention in his last days in office, after his envoys had joined with China, Iraq and Sudan in voting against it.

Of course, a nonpartisan observer might note that Bolton's supporting Kabul's right to arm terrorists is not that much different from Clinton's envoys siding with totalitarian nations against the International Criminal Court. In substance, their positions are much closer than partisan supporters of either would admit. But Clinton at least knew that the policies his emissaries were pursuing made the U.S. look "like a bunch of kooks."

And Clinton's policies, which also included holding out on the Kyoto Protocol, the Land Mines Convention and the ICC, at least allowed the U.S. to get in and argue the details -- which implied that the U.S., no matter how hard-nosed it might be in defense of its perceived interests and no matter how bizarre those interests looked to others, was at least prepared to accept the theoretical principle of a global community and a rule of international law. And even if the negotiations often looked like sabotage, Clinton could always blame the right-wing Congress, a position most countries were prepared to buy, especially when Sen. Jesse Helms, R-N.C., was the Senate's foreign policy arbiter.

Now the administration has no such excuses. Indeed, many senior officials at the U.N. consider Colin Powell's State Department to be much friendlier to the U.N. and less beholden to the Helms brigade than that of his predecessor Madeleine Albright. It does raise the question of how much longer a reasonable and urbane secretary of state like Colin Powell can allow the black helicopter-Star Wars crowd around Dick Cheney, Donald Rumsfeld and John Bolton to ruin America's image abroad.