"Planet of the Apes" 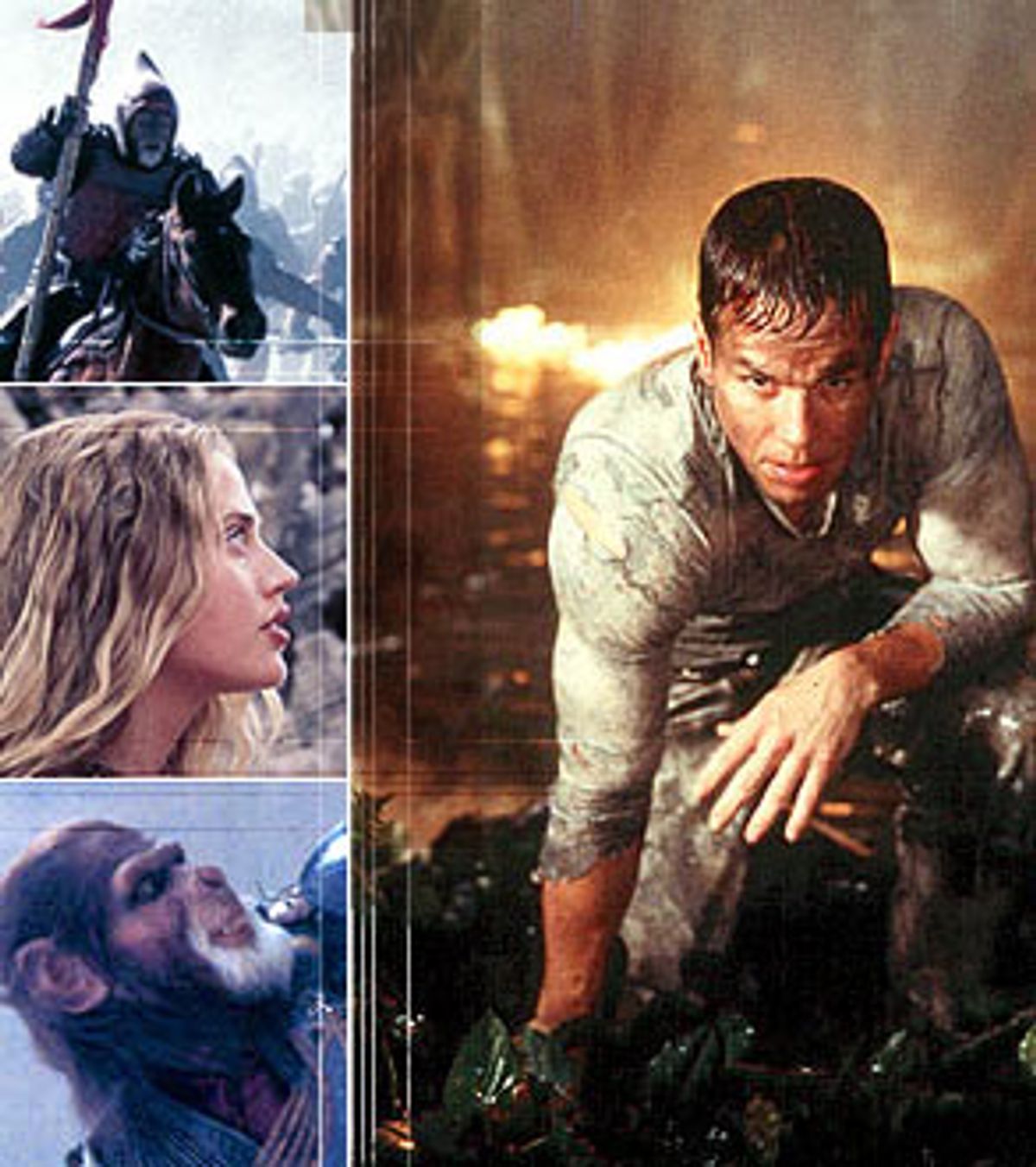 No one can make foreboding look more inviting than Tim Burton. The first third of his "Planet of the Apes" is like an invitation to explore a lost kingdom both more brutal and more civilized than our own, a place where china teacups comfortably coexist with shadowy, spiky suits of armor. Cruelty may exist here, but good manners are still king. All done up in glossy, muted browns and sepias, richly embroidered tapestry interiors and opium-tinged Victoriana, Burton's planet is unsettlingly primitive-futuristic, but also as redolent of vanished glory as a Roman coin. It's not a place built to suit man; apes, with their soulful eyes and unassailable dignity even when caught flea picking and butt scratching, are the only creatures that could possibly be in charge here.

Burton, with the help of master cinematographer Philippe Rousselot and production designer Rick Heinrichs, has built the perfect primate planet. But he doesn't know quite what to do with it once he has set it up, and that's the major failing of this "Planet of the Apes." Burton catapults us into a world we've never seen before only to use it as a backdrop for a rather conventional battle picture, complete with a venerated war hero and a ploddingly simplified St. Crispin's Day speech. Past the first third, "Planet of the Apes" is entertaining enough, but it stops far too short of being completely seductive.

Sometimes it seems that all it takes to fall in love with a Tim Burton movie, from the poetically tattered "Sleepy Hollow" to either of his brooding "Batman" movies, is to give yourself over to the look of it. But when he's at his best, Burton's twisted, kid-sinister sensibility goes hand in hand with his visuals. They become an inseparably entwined whole, like the gnarled, ancient branches of separate trees that have fused together over time.

But Burton's instincts feel somewhat constrained in "Planet of the Apes." There are too many times when you feel him pulling back, as if he were following orders not to make a picture that would seem too strange or alienating to audiences. The movie has some lovely twists in it, including a sly surprise cameo and a sequence in which a monkey "god" makes a special appearance. And it's definitely a Tim Burton movie -- you know it when you see a human child being dropped into a burlap bag by a gang of scary ape soldiers, a vision straight out of a 19th century European fairy-tale engraving.

But some of those touches feel a bit rote, and Burton doesn't know quite what to do with the extraordinary actor he has working for him this time around, Mark Wahlberg. Wahlberg sometimes looks lost in the movie, as if he were overwhelmed by the magnificence of it instead of caught up in the spirit of it.

This "Planet of the Apes" is moodier and more menacing than the 1968 Franklin Schaffner original, although that picture has held up well over the years: There's a mournful contemplativeness to it, and the sequence where marauding apes round up the terror-struck humans who are trespassing on their property is still terrifying (partly because it all takes place in broad, cold daylight).

Wahlberg is Leo Davidson, an astronaut-in-training stationed on a research lab traveling through space, circa 2029. He works closely with the lab's live chimps and becomes distressed when one of them, Pericles, is shot out in a pod to investigate a space storm and disappears. (Anxious animal lovers should note that no great harm comes to the chimp; as for the apes on the planet -- well, that's another story.) Davidson disobeys orders and shoots off in another pod to rescue him.

After hurtling through a time hole in space, Davidson crash-lands on a planet run by apes, some of them very dignified (Senator Sandar, played with unflappable patrician grace by David Warner) and some very bloodthirsty (Tim Roth's General Thade, whose simian hissing and snarling make him the stuff of nightmares). Humans are the second-class citizens on this planet; they're rounded up by these damn dirty apes to be sold as slaves. Davidson finds himself captured and penned up with the lovely Daena (played by model Estella Warren) and her father, Karubi (Kris Kristofferson, in a role that's way too small for his down-to-earth classiness and winking good humor). The pair, in one of the movie's best visual jokes, sport matching his-and-hers flowing pale tresses.

Davidson soon discovers that not all the apes are hostile, particularly Senator Sandar's daughter, Ari (Helena Bonham Carter, luminous even beneath layers of latex), a human rights activist who believes apes and humans can learn to live together as equals. It's little wonder that Ari develops a crush on Davidson; the movie's greatest failure of nerve is that he doesn't fall head over heels for her.

Instead, "Planet of the Apes" -- its script written by William Broyles Jr., Lawrence Konner and Mark Rosenthal -- sets up a romantic rivalry between Ari and Daena, who vie for Davidson's affections. The conceit doesn't work: Daena, pouty, gorgeous and vacant, looks mighty cute in her skimpy slave threads, but the heart and soul of the movie have been poured into Ari.

Before we get to the gushy stuff, it's important to point out that "Planet of the Apes" is essentially an adventure movie, with Davidson leading the humans in an uprising against an army of beefy, Darth Vader-like apes. Both the special effects and the ape makeup are impressive. There's nothing cheesy about this "Planet of the Apes" -- the battle sequences are nicely executed, and the apes' faces are realistically mobile. What's more, Burton has populated his planet with all types of primates, in different styles and colors: Some resemble chimp versions of the superscary flying monkeys in "The Wizard of Oz," swinging and leaping in ways that are more menacing than delightful. Others are more like stately gorillas, with glossy, wrinkled noses and thick, mobile, human-looking (if hairy) fingers.

The apes here have more character than Wahlberg. He's best at the very beginning of the movie, when he expresses dismay that his chimp friend is going to be flung into space. "Never send a monkey to do a man's job," he says, and the line is only half-funny: The look on his face is dead serious, and you understand it, having gotten a glimpse of Pericles sitting earnestly in his space pod, ready to go, his face scrunched in intense concentration. He clearly wants nothing more than to do his job well. You can't look at that face and fail to see it as only a few steps away from being human.

"Planet of the Apes" is full of little touches like that, as well as lots of pointed jokes about how badly human beings treat animals on this Earth. But by the time the picture rattled to its confusing and badly conceived ending, I couldn't help wishing it had somehow added up to more.

Because as elaborate and impressive as "Planet of the Apes" is on the surface, its truest magic lies in Carter's eyes. Her Ari is a great beauty, even with her gently stooped posture and swinging, swaggering walk. Even beneath the makeup, that face is somehow recognizable as Carter's -- there's something endearingly urchinlike about her expression, even with those thunderous eyebrows completely covered up.

Burton directs one gorgeous and frankly erotic moment between Davidson and Ari: During their first encounter, Davidson is caged, and he desperately, almost brutally, pulls her to him through the bars, imploring her in a whisper for help. She's a little frightened at first, locked in his grasp from behind, but the camera shows us her eyes warming up to him -- there's a flicker of smoldering animal desire there. Later, she looks at him with such liquid love that you wonder how he could even be bothered to look sideways at the bland Daena. Wahlberg doesn't respond to Ari with much warmth; with the exception of one brief moment where, hoping to persuade her to stick with him, he promises her an experience unlike any she's ever had before, the interplay between them is disappointingly cool.

In a romantic rivalry between an ape woman and a human one, is there any way the ape could possibly win out? I wouldn't have thought so before I saw Carter. As she plays Ari, consumed with doomed love, she's as tremulous and intense as a Gothic heroine. When she and Davidson kiss, in a nice little reprise of the kiss between Charlton Heston and Kim Hunter in the original, she's as lovely and as delicate as a Victorian bride. It's clear that she's Burton's most beloved character here. Maybe he simply realized there was no man good enough for her.