Larry Clark loves to show us teenagers having sex and getting wasted, but does he have a point? 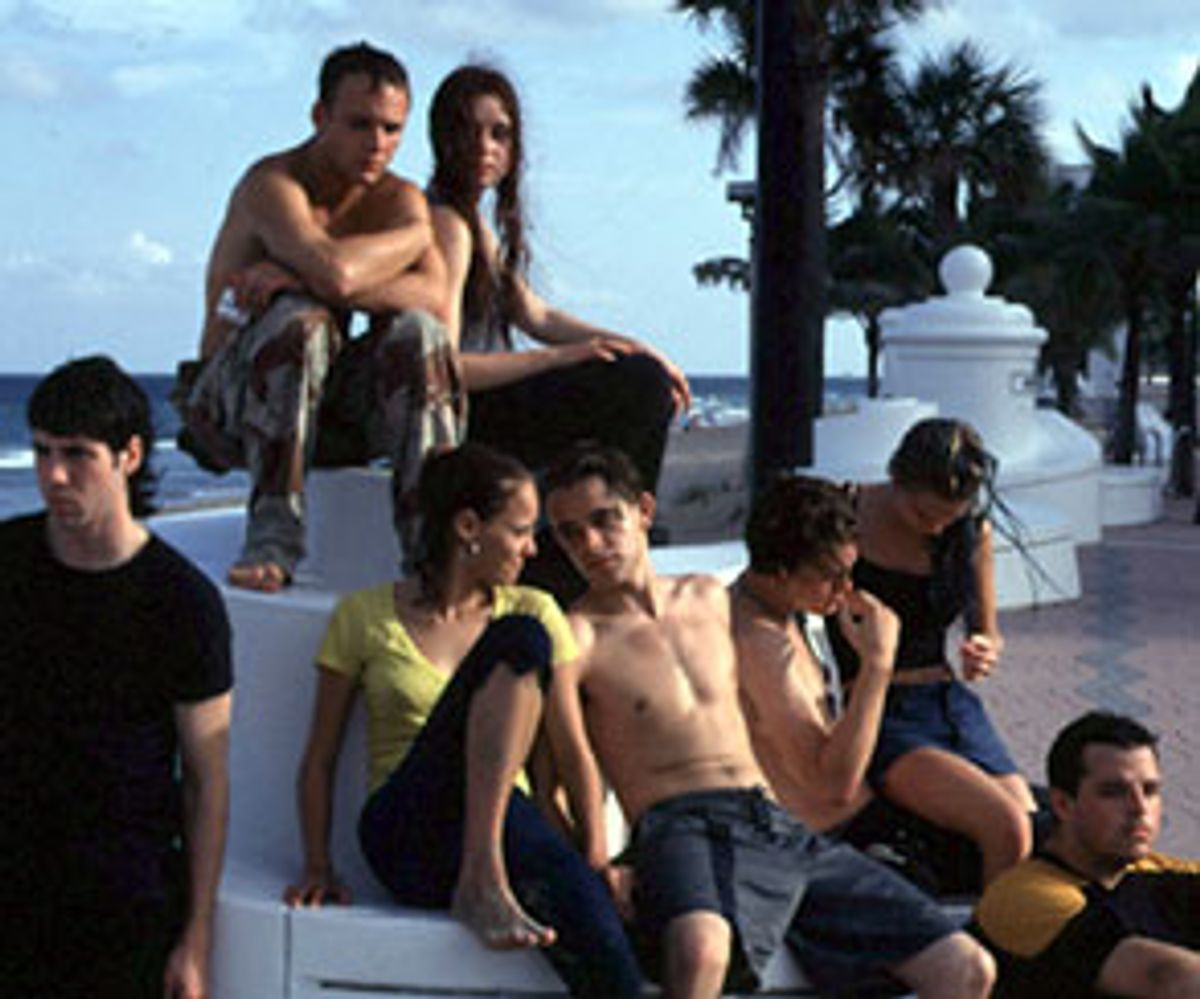 "Nature sucks!" says an alleged Mafia hit man in Larry Clark's "Bully," as he watches the crabs in a Florida swamp devour a dead body. In the end, the character turns out to be just another one of Clark's white suburban teenagers living out a perverted fantasy and not a hit man at all. But the line makes a suitable epigraph for this alluring, puzzling and depressing film: Nature sucks, human nature most of all.

Clark, the softcore art photographer who made a splash with his 1996 directing debut, "Kids," definitely has something going on, but I've never been sure what it was: gritty realism or pornography -- or maybe the fact that we often get these categories confused and that the boundaries between them aren't clear. "Bully," based on Jim Schutze's book about a real-life case in which a group of Florida teens cooked up a half-witted murder plot against a mean rich kid who pushed them around, is more of the same. Clark's young people exist in a realm of drugs, cars, fast food, video games, violence and, above all, sweaty butt-naked sex that is as free of adults as a "Peanuts" TV special. He loves these kids and he condemns them; his movie moralizes about their lack of conscience and values even as it portrays their teen hedonism as a liberated Utopia.

"Bully" will inevitably be compared to Terry Zwigoff's "Ghost World"; both are depictions of teenage alienation, and they even share an actor, Brad Renfro, who stars here as the brutalized hunk Marty and plays Josh, the uncommunicative convenience store clerk, in the Zwigoff film. In fact they couldn't be more different, although you could argue they're both legitimate views of teenage experience. "Ghost World" is a sympathetic but unsentimental portrait of a girl who is, if anything, too articulate and self-aware for her own good, at least in the short run. The characters in "Bully" are endorphin surfers barely capable of forming complete sentences; their consciousness is shaped by their ids and their sense organs, and Clark watches them with the cold eye of a voyeur, scientific or lascivious or both.

We see Marty's face in extreme close-up in the very first shot of "Bully." He's on the phone, telling someone, "I want you to suck my dick." Elsewhere in the house his mom calls out, "Marty, honey! Dinner!" Cut to a slim, suntanned girl named Ali (Bijou Phillips), who is wearing minuscule cutoffs and a nearly nonexistent halter top, and telling her best friend, "His cock was beautiful. He ate me out for, like, an hour." Minutes later, or so it seems, these three characters are ensconced in the muscle car belonging to Bobby (Nick Stahl), the handsome, vaguely simian date rapist of the title. He grabs Ali's head and thrusts it into his crotch, announcing, "Welcome to the party, bitch!"

It's not that any of these moments are unconvincing on their own terms, exactly. But Clark seems so hopelessly enraptured with his hard-body white-trash characters, with their faux-gangsta mannerisms, their booty-thumping hip-hop soundtrack and their debased strip mall existence, that he pushes the whole movie into knowing self-parody and can never quite drag it back. If "Bully" is meant to be dark comedy it lasts about twice as long as it should; a little bit of watching these characters fuck, smoke weed, whale on one another, call one another bitches and drive around in cars plotting their dumb-ass murder goes a long way. ("What are you going to do it with?" one character asks another, via cellphone. The answer: "I don't know. A gun or a knife or something.")

On the other hand, "Bully" is too arch and cruel-hearted to create much in the way of pathos or tragedy, even if its narrative structure seems to be lifted from "Macbeth." As the loyal lieutenant turned assassin we have Marty, who has put up with Bobby's beatings and persecution, not to mention Bobby (an apparent closet case) pimping him out to older gay men, since they were kids. As Lady Macbeth we have Ali's friend Lisa (Rachel Miner), who sees past Marty's tendency to beat her up and into the wounded little boy, and potential killer, within. (After the killing, Lisa even blows a gasket and begins to hallucinate bloodstains everywhere, just like the Bard's antiheroine.) If a star is born in "Bully" it may not be the slithery, snakelike Phillips, enjoyable though she is, but Miner, who impresses you most with the fragile, unstable shimmer of her expression, despite doing about two-thirds of the film naked.

If you stick with "Bully" through its seemingly endless repetition of themes and its hurl-inducing hand-held camerawork, it does build a crude, indefinable power. There's no question that Clark works well with young actors and can be an acute observer of moments: Marty drooling and crying like a baby when Lisa confronts him about Bobby's bullying, or two minor characters, blown out on acid, hilariously trying to make sense of a video game. During the horrific murder scene itself and its ludicrous aftermath, when the kids start to bicker, blow their alibis and confess in all directions, you'd almost swear that the sneaky, duplicitous Clark had a point to make about these young barbarians and the society that has produced them. I mean, a point besides "Welcome to the party, bitch!"