Is Bill Maher a libertarian?

His "Politically Incorrect" record shows him to be something really un-PC: A flaming liberal. 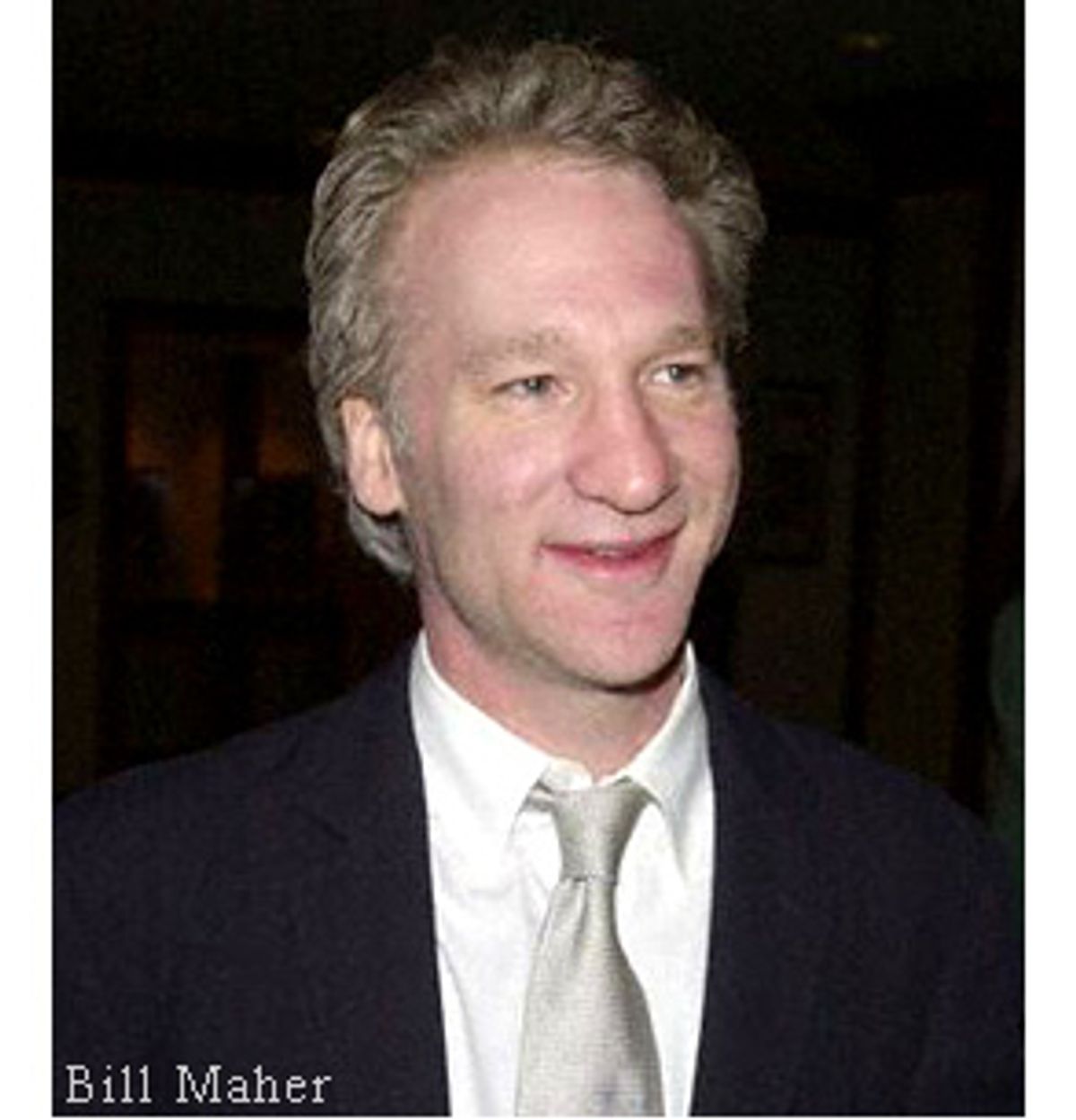 Perhaps the most politically incorrect thing Bill Maher could do these days is admit he's more or less a liberal.

With the White House and Congress solidly conservative and the Senate on a constant Democratic deathwatch, these are not the best of times to be teetering left of center. And so the host of ABC's "Politically Incorrect" has done a rather political thing.

He's come out as a libertarian.

For Maher, this isn't a recent phenomenon. Maher had been calling himself libertarian well before Bill Clinton left for Chappaqua, N.Y. And why not? The host of the late-night political discussion program has never been above raising a few eyebrows.

During the 1996 elections, Maher had comedian Al Franken and commentator Arianna Huffington do political soliloquies while lying together in bed. That year, Maher also endorsed Bob Dole -- not because they agreed on most issues but because Dole was a "war hero." Last year, Maher was one of late night's leading political skewers, lampooning each party's standard-bearers ("Gush" and "Bore" were his inventions) and pointedly lobbying during the contest's final weeks for voters to elect a third-party candidate.

That Maher calls himself a libertarian could be taken as yet another joke if only Maher weren't so serious. Recently, he welcomed libertarian talk show host Larry Elder to the show with fist-pumping enthusiasm. And while they agreed on the issue of the day (privatizing Social Security), they have had plenty to disagree about. Elder is against the minimum wage and affirmative action and in favor of abolishing the Department of Education. Maher has routinely staked out contrary positions on these and other issues.

In conservative chat rooms, Maher has been called "a tax and spend politically correct liberal who's a-okay with the Leviathan state as long as he gets his Hustler, his hookers and his hash." Vanity Fair once described Maher as a "throbbing boner libertarian," while Vogue once called him a "conservative pit viper." Brill's Content weighed in by calling him more of a libertine.

Maher clearly revels in all the controversy. Though his positions are no different from those of many liberals when it comes to legalizing drugs and free love, Maher's questionable political labeling is clearly a politically savvy move. It's gotten him libertarian guests like Browne, Charles Murray and Russell Means -- not to mention a bevy of conservative panelists like Ann Coulter, Floyd Brown and Dennis Prager.

Whether they believe him to be an actual libertarian is anyone's guess, but like any astute politician, Maher's well aware that a little hyperbole can go a long way.

And like any pseudo-politician, Maher deserves a pseudo-scorecard. Here's how Maher rates with the Libertarian Party's agenda:

The Libertarian Party platform compares gun-control laws to Prohibition. The party believes such regulations only harm law-abiding citizens by creating a black market for firearms and increasingly powerful organized crime. Echoing the National Rifle Association, the party asserts that it's people who kill people and that guns are "inanimate objects." Libertarians believe police and politicians should encourage gun ownership as well as education and training.

Maher supports gun-control laws. While he says he favors the right to own "a gun," he questions whether large weapons arsenals are what the Founding Fathers had in mind. Maher recently told Texas legislator Suzanna Hupp, "The Second Amendment doesn't refer to the world we live in now." He voiced skepticism about Hupp's proposal to allow the carrying of concealed weapons. His views mirror the Democratic platform that advocates "stronger laws and stronger enforcement."

Libertarians believe America's public schools have failed. They cite overregulation for turning schools into "dangerous places for our children." They advocate an end to government control and a full disbanding of the Department of Education. They say control should rest with "parents and teachers, and [they] encourage alternatives to the public school monopoly."

Maher supports public schooling. He's particularly outspoken against home schooling, calling it "the social version of inbreeding." He has also been critical of school voucher initiatives, claiming they would take money away from needy institutions.

Libertarians believe Social Security is heading toward bankruptcy and argue that Americans should be given the option to "opt out" of the government system and invest their money in personal retirement accounts. They say that even the most conservative investment strategies would yield three times the benefits promised by Social Security.

Maher agrees. On his July 12 program, Maher said Social Security was "advancing the term 'lame' to people too lame to save for themselves." He advocates a streamlined Social Security system primarily geared toward the disabled.

According to libertarians, U.S. foreign policy is "little more than welfare for nations," asserting that the $14 billion per year the federal government spends on foreign aid more often than not hurts developing nations. They advocate a foreign policy that focuses on strengthening U.S. businesses, helping them build up their positions abroad.

Maher supports an active U.S. foreign policy, saying that America's position in the world "is the price we must pay" for being the most influential nation on earth. Long distrustful of big business, Maher believes efforts to strengthen American companies with government subsidies amount to corporate welfare.

Libertarians take no firm stand on abortion, saying that people "can hold good-faith views on both sides." However, the party does advocate ending all federal funding for abortions and other prenatal services. "It is particularly harsh to force someone who believes that abortion is murder to pay for another's abortion," they say.

Maher is staunchly pro-abortion rights. He believes the ultimate freedom from government is the right to decide what to do with one's body. On a recent show, Maher applauded a Dutch "abortion boat" that provides abortions to women in Ireland -- where the procedure remains illegal.

Libertarians argue that the federal government is a far greater polluter than oil companies, chemical companies and nuclear power plants. They criticize federal agencies such as the Environmental Protection Agency, saying they are large, ineffective creations that do little to ensure public safety. Instead, libertarians advocate the privatization of public lands by a combination of stewardship organizations and commercial industry.

Maher has railed against proposals to drill for oil in Alaska's wildlife refuge. He has spoken in favor of the Kyoto treaty on global warming and criticized President Bush's opposition to it. During his July 24 monologue, Maher made his environmental position clear by saying that the Bush administration "has never been caught in a sex scandal -- unless you count raping the environment." And Maher believes government regulation of clean air and water is one of the cornerstones of what government is meant to do.

Libertarians believe the war on drugs has been lost and is impossible to win. Current drug laws are a "rerun of Prohibition," they say. The party believes citizens should take responsibility for themselves and asserts that the majority of drug users do so peacefully and recreationally.

Maher agrees. Indeed, it's on the issues of drugs, pornography and prostitution that Maher is most vocal against government involvement. The Democratic and Republican parties are in favor of current drug laws, though the recent passage of state medicinal marijuana propositions and legalization overtures by some Democrats and Republicans may eventually alter these positions.

Quietly, Maher concedes his attempt to cloth himself in libertarian ideals hasn't been easy. Nor does his staunch advocacy of the death penalty ("I don't know why every life is so precious") make him a prototypical liberal. However, Maher clearly approaches most issues with a decidedly center-left bent. His views are much closer to Clinton's than they are to Browne's.

So if being politically incorrect is about telling the truth, why doesn't Maher just say it?

He isn't much of a libertarian.

Dann Halem is an LA-based journalist who has written for Slate, Entertainment Weekly and Chicago Magazine.