When people put their bodies on the line in medical trials, can they be sure that scientists aren't cutting corners or preoccupied with stock prices? 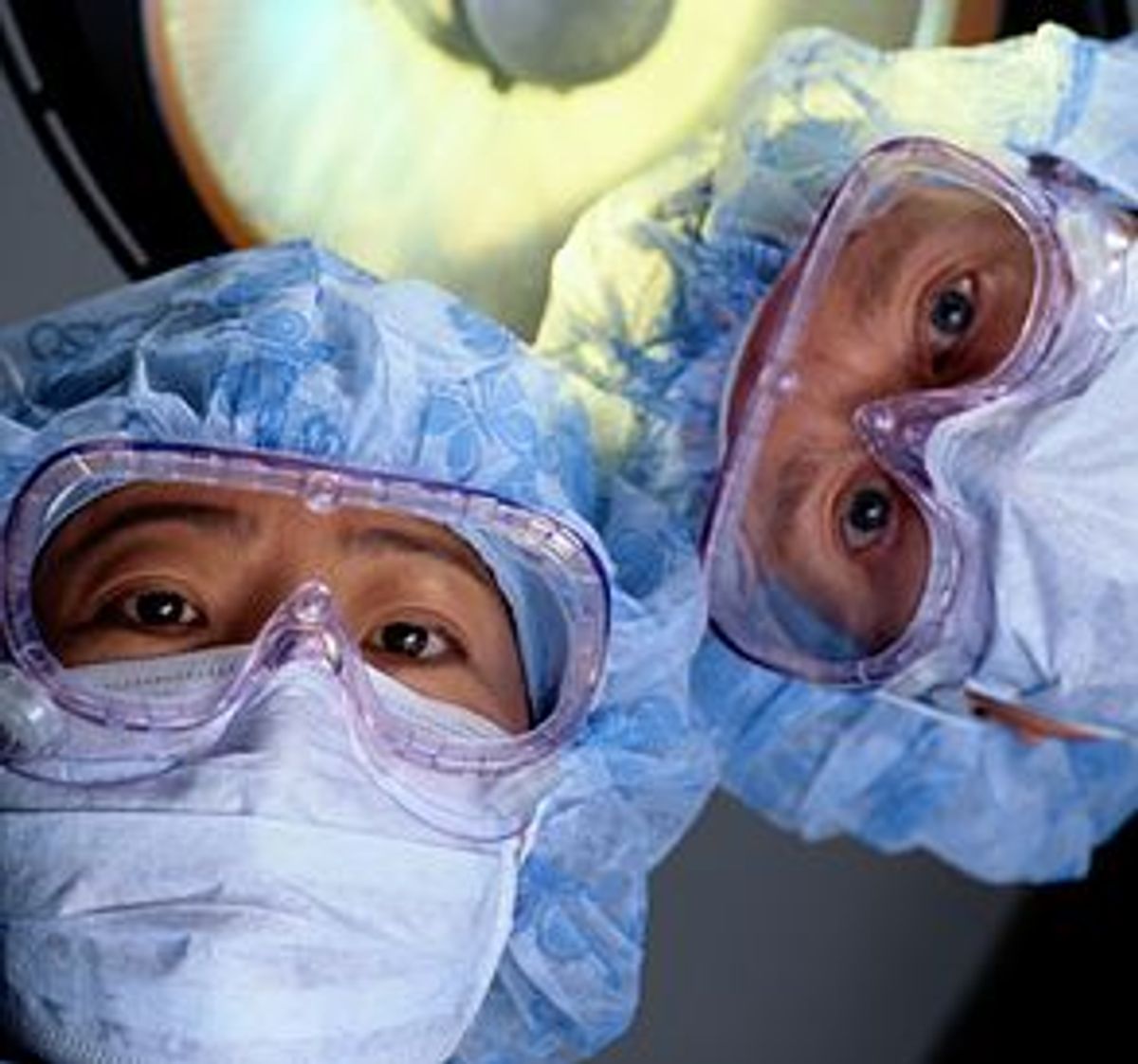 On May 4, Ellen Roche, a healthy 24-year-old woman, inhaled a drug known as hexamethonium as part of an experiment at Johns Hopkins University designed to figure out what nerves are at work in asthma attacks. Although approved by the Food and Drug Administration for intravenous use in patients with high blood pressure until 1997, the drug was known to cause serious lung problems and was never approved for inhalation. But Roche, a laboratory worker and veteran medical research subject, didn't know any of that, because the consent form the researcher, Dr. Alkis Togias, had her sign didn't mention it.

It seems that Togias had missed the lung toxicity in his review of the literature and didn't think the FDA's pulling of the drug from the blood pressure market was important enough to mention in the consent form. (A simple search on Google in July turned up reports of the drug's toxicity, and even if you can't believe everything you read on the Web, the search results, if Togias ever sought them, would have given him cause to investigate further.) Neither he nor the internal committee charged with reviewing the study deemed it necessary to apply to the FDA for approval to use the drug in the trial. Even when the first volunteer to take hexamethonium developed a cough, Togias ignored the symptom and failed to report it to the internal review committee, saying that it was a respiratory infection going around campus.

On May 9, Roche was admitted to Hopkins' intensive care unit, where she eventually needed a ventilator to breathe. She died on June 2.

"Hers was a truly noble act," said a Hopkins statement reporting the findings of an internal review on July 16. By emphasizing Roche's nobility, Hopkins implies that her death was akin to a casualty in a good war, a necessary loss of life on behalf of a greater cause. But in wars, soldiers know the risks. When information about other risks, like those attendant to Agent Orange, is suppressed, governments are rightly condemned. What makes Roche's death an unconscionable tragedy is that had Hopkins followed the rules and Roche known the risks, her untimely death might not have occurred. Hopkins said it was taking full responsibility for Roche's death, but it then laid the blame at Togias' feet, criticizing his work and pledging to improve its research review procedures. It thought that would be enough to placate the feds.

It wasn't. On July 19, the agency shut down all of the 2,400 or so federally funded human trials at the medical center. The response from Hopkins was a sputtering, angry press release that included the statement "We strongly believe that this action was taken in utter disregard of patients' health and potentially of life." To an outside observer, however, it would seem that it was Hopkins -- in approving Togias' protocol, including his utterly flawed consent form -- and not the government that was guilty of such utter disregard. (The funding was reinstated, with provisions for strict supervision, on July 23.)

While still taking "responsibility," Hopkins has also attempted to place the blame on the FDA's shoulders, saying that the agency had, by not responding to December 2000 and April 2001 letters requesting approval of Hopkins' recently revised research procedures, effectively bestowed that approval. That dishonest spin doctoring should be considered reprehensible in the face of the needless death of a healthy 24-year-old woman.

Important human trials have always included risks, but have also vastly improved our longevity and quality of life. So are they worth it to the participants, who often don't benefit directly? And is there a cavalier attitude throughout medical research circles that makes the danger as great as recent events suggest? Those are questions that make Susan Quinn's new book an important read. The book, aptly titled "Human Trials," is a revealing inside look at the drama and frailty of our system of human experimentation. Quinn spent time with participants in trials of drugs for multiple sclerosis and rheumatoid arthritis, two autoimmune disorders in which the immune system mistakes the body's own substances for foreign invaders.

For the most part, the risks taken by the patients in the trials in this book are minimal and fall well within the acceptable bounds of medical ethics. What's not particularly reassuring are the ways in which industry attempts to minimize and offset its own risks.

The book's main character, Harvard Medical School professor Howard Weiner, is an earnest, likable and ultimately very human doctor. Weiner's journal, quoted liberally throughout the book, paints him as an occasionally stubborn pragmatist who will sidestep cumbersome rules to do what he thinks best for patients. He's a respected academic, trained by leaders in the fields of immunology and neurology, where he has made important contributions, but markers of success seem to come more slowly to him than to some of his colleagues.

That may be due to his brand of optimistic contrarianism, which leads him to believe so strongly in a theory known as "oral tolerance," upon which the drugs in these trials, Myloral and Colloral, are based, that he is heedless of scientific critics. The basic idea is that the immune system can become tolerant to those substances it's destroying in autoimmune disorders if those same substances are introduced to the digestive system. The theory has been around for some time, and has support from some scientists, but no drugs based on it have ever been proven effective as a treatment for disease. Other researchers are skeptical, noting the theory's similarities to homeopathy, whose effectiveness also remains unproven.

His slow progress in academia appears to drive Weiner into the arms of venture capitalists. They help him start a company, AutoImmune, that sets up an office in Lexington, Mass., and eventually goes public, with its shares now traded on the NASDAQ. From the start, there are conflicts everywhere. Corporate officials become nervous when Weiner brings a video camera to document meetings and presentations. Clinicians enrolling patients at their offices are put off by the contract research organization hired by AutoImmune to standardize the trials. (In her character development, Quinn occasionally missteps as a writer. References to things like "a lion getting a blow-job from a beautiful girl" and "Jew-boy" seem unnecessary.)

After going public, AutoImmune officials seem to become interested only in their stock price, and not in the efficacy of the drugs. The night before the rheumatoid arthritis trial results are to be announced, Weiner has a happy dream "that AutoImmune stock was trading at $32 -- the trial had worked." Significantly, he mentions the stock price first, not the successful trial on which that price is based. Citing time constraints, the company decides to skip Phase II trials of Myloral, an unorthodox step. (Phase I tests the safety of a new drug on a small group of healthy volunteers; Phase II tests the safety and efficacy of a new drug on a small group of sick patients; and Phase III tests safety and efficacy in a large group of patients.) And just like Abiocor, manufacturer of the artificial heart recently transplanted into a man in Louisville, Ky., it chooses secrecy over openness in describing its data.

Ultimately, Myloral and Colloral fail to outperform placebos in their trials. But just because a drug doesn't work doesn't mean you can't sell it. According to a recent press release, the company has plans to market Colloral as an over-the-counter drug for rheumatoid arthritis, with FDA clearance. Quinn herself said that the failure of the trials made the story less of a "slam-dunk" narrative.

Still, that's the important element that many overly optimistic researchers forget when creating human trials. Most of the drugs they test will fail, and given that, researchers must be supercareful when constructing trials. Quinn's book shows that it's easy to let things like stock prices distract you from issues of safety and efficacy. Some doctors criticized AutoImmune's strict protocol, designed to produce the "cleanest" or most indisputable results possible, for leaving study participants without effective treatments for their illnesses while they were involved in the study.

Toward the end of the book, Henri Termeer, CEO of Genzyme and a member of AutoImmune's board, argues that AutoImmune should have done its research in an academic center. "Biotechnology has been good for innovation," he told Quinn, "but bad for investment."

But who would say that academic centers treat their human subjects any better? It's unlikely that Ellen Roche's family would. Hopkins, in fact, has just become involved in a second imbroglio, this one involving one of its researchers conducting human trials in India. As more and more drugs are hyped earlier and earlier by journalists and investors, researchers need to be more and more careful how they conduct trials. Potential subjects need to be able to honestly assess the risks they're taking when enrolling so they can be confident that the studies they are generous enough to participate in are as safe as possible.