A bounty of dewlaps and drooping hooters

To what do we owe this fixation in the media on ripening women? 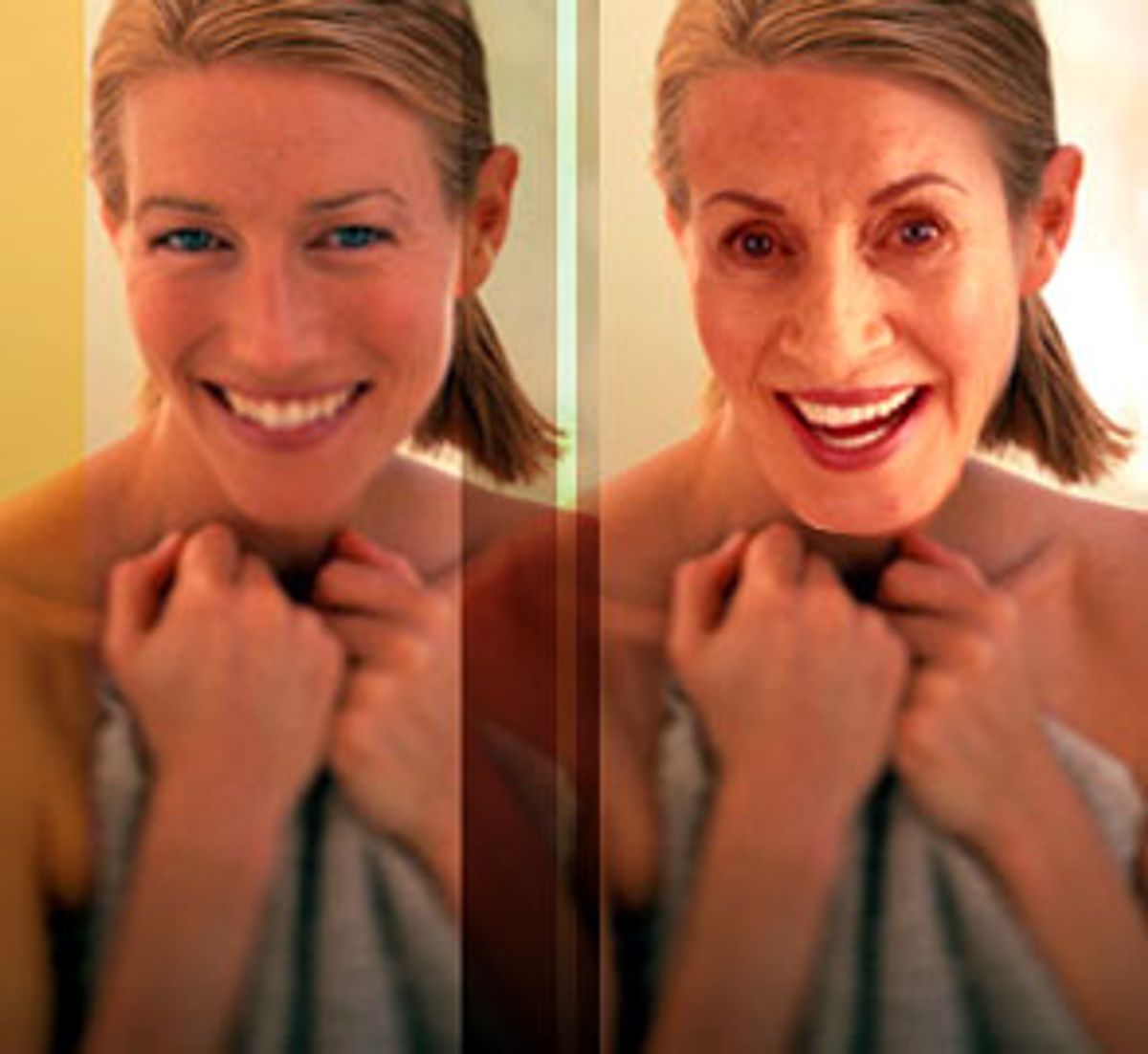 How to explain the sudden parade of codgerettes currently strutting across America's newsstands? Granted, it's not as if magazines don't occasionally trot out a few wizened matrons for a backhanded decennial "tribute" (Vogue and People, at least, owe it to their readers), but they rarely do it en masse. So when Vogue, Esquire and People simultaneously devoted their covers to the subject of ladies on the wane last week, my first impulse was to attribute the coincidence to the power of Sigourney Weaver's publicist (the tripartite campaign at first seemed inspired by her upcoming 51st birthday); but Weaver was mysteriously absent from People's homage to ladies who ripen.

How then to make sense of this embarrassment of biddies? Magazines don't usually devote themselves to superannuating ladies without first softening the blow with some implausible, far-fetched justification in the form of a message. And sure enough, messages abound. This time, as usual, Vogue's is aspirational, People's is inspirational (as in safely out of your middle-class reach) and Esquire's is remedially educational.

Interestingly, only Esquire dared to go with a solo 50-year-old as cover bait ("Sigourney Weaver is fifty-freakin'-one!"). It's done, of course, in the name of science. The magazine sets out to explain, in hilarious scientific detail, just exactly "How Women Age" (or what to expect when your mate dates). Here, Esquire gives its boys some news they can use. There is a helpful graphic charting "her changing shape." There is an explanation for the age-old question "Why do breasts sag?" ("The mammary -- lobules, ducts, glands and connective tissue -- and fat tissues are supported only by ligaments -- some sagging is inevitable.")

The featured 20-year-old, a dead ringer for Alanis Morissette, looks suspiciously like a nonmodel (though the 30-, 40- and 50-year-olds are dutifully emaciated as is the custom), and the sexagenarian is no Brooke Astor. Whereas the Magazine for Men's featured grandma is naked and weathered and wears her long, gray hair in a style popularized by Cherokee chiefs, the fashion bibles' mature ladies are dressed protectively in rich-lady armor, representing the face-lifted, airbrushed, impossibly soign&#233e ideal of, well, Vogue.

Vogue, predictably circumspect on "The Age Issue," briskly couches the unpleasant subject in practical matters such as "What to Wear From 17 to 70" and how to be "Vogue at Any Age." (Needless to say, Amber Valetta -- Vogue at a very young age -- gets the cover while Weaver's "sporty elegance" is dispatched to the back of the book.) People, meanwhile, tries to distract us with its shiny celebrities, while Vogue runs around tossing pink scarves over bare bulbs. As a result, Weaver actually looks "fifty-freakin'-one" on Esquire's cover, and not like the PhotoShopped nectarine she resembles in Vogue.

Maybe Esquire is atoning for something; but Vogue shows no such signs of remorse. Everyone, even "the woman you love," will reach "the end of her invincibility" at the age of 30, says Esquire. Yes, but the woman you love, if she can afford it, can be "Vogue at Any Age," counters Vogue. "Luxurious refinement -- sleek, romantic, dramatic -- wins the day" for Vogue's sexagenarian former models, movie stars, socialites, dress designers and dress designers' wives. But then, even "today's high-schoolers take a mature approach" in the pages of Vogue -- Vogue's idea of today's high-schoolers being Lauren (daughter of Neil) Bush, Charlotte (daughter of Princess Caroline) Casiraghi and Elizabeth (daughter of Mick) Jagger.

If you can't afford to be Vogue, maybe you can be sexy. People insists that you can, and what's more, you can be "Sexy at Any Age!" Excellent! This sort of enthusiasm is infectious, far more heartening than Vogue's chilly dictums and Esquire's parade of grim facts -- until you discover that this happy statement applies only to movie stars (a just-turned-30 Winona Ryder, a not-quite-40 Meg Ryan, a 60-year-old Faye Dunaway, looking as taut as a bongo drum; you could bounce a quarter off her face, and yet she "doesn't like to fuss" with makeup, preferring "a natural look").

Maybe it's the overeager exclamation point, maybe it's the capital letters, maybe it's that Jenna Elfman, 30, and Heather Locklear, 40, are featured next to a suspiciously washed-out photo of Jane Seymour, 50, but there's something desperate and shrill about the whole thing. After all, People promises the stars' secrets to feeling "more confident and alluring than ever," then informs us that Ryan and Seymour look like they've been preserved in amber because they have a good attitude and get plenty of rest.

If this doesn't hammer home the point that celebrities are very different from you and me, then the bit about Locklear eating three Krispy Kremes in one sitting should do it. People magazine would just like to remind you not to try this at home.

The whole thing is disconcerting. Of course, People regularly features women who have aged realistically or whom the surgeon has not treated kindly, but these specimens are usually relegated to the perky but tragically ill portion of the magazine: Lupus survivors are not "Sexy at Any Age!" Models, actresses and Martha Stewart (inexplicably) are. My suggestion to readers looking for real-life role models: Head for the "Coping" section and stay there.