How I was cured of my desire to drown myself in sex. 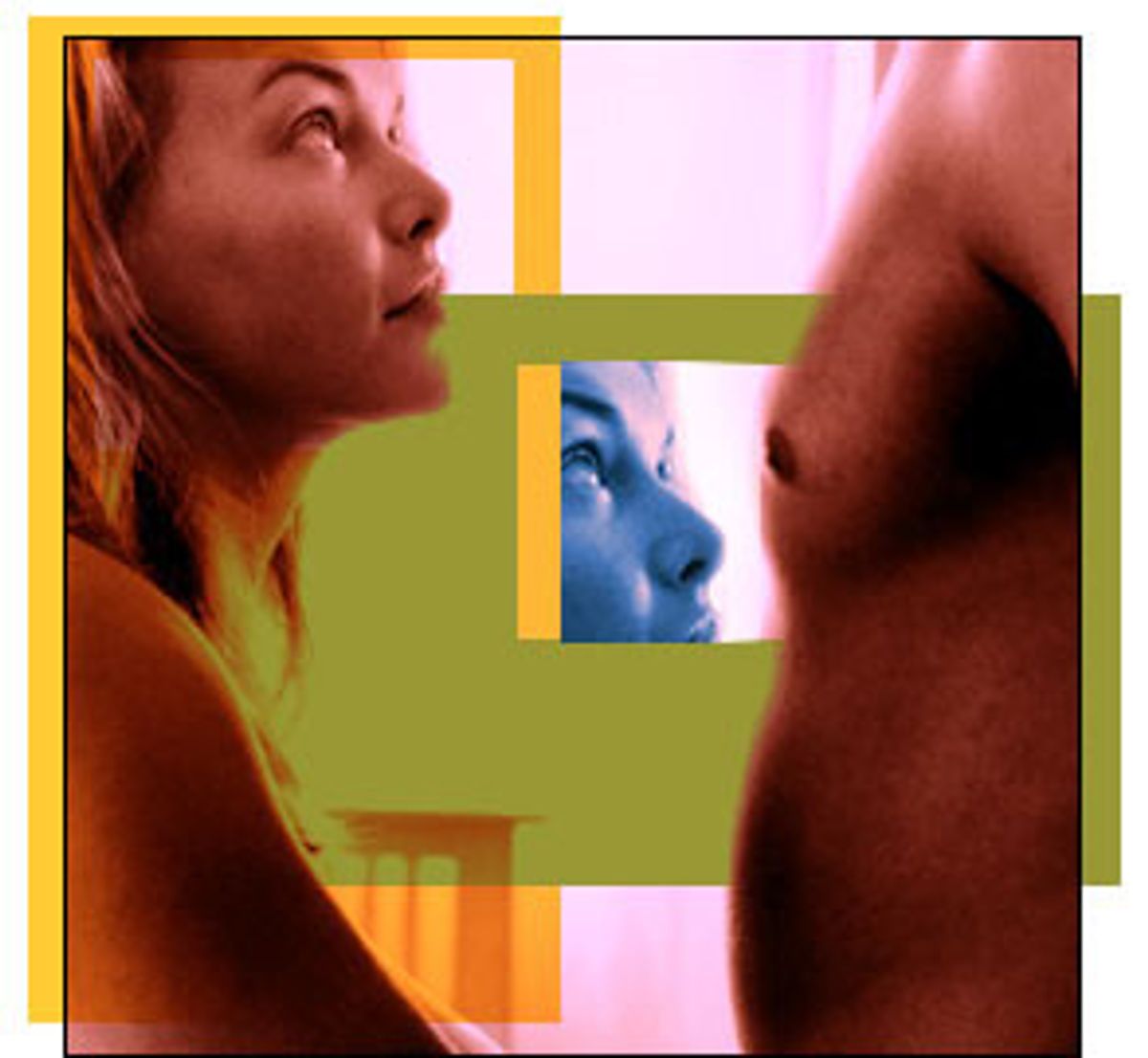 "Sex is the last refuge of the miserable."

I've made some pretty dumb mistakes on my junket o'er this earth. Actually, none of them were pretty.

I grew up a sheltered rich kid in a home that was mildly Gothic and oddly provincial. Nouveau, the unkind might say. I had to curtsy to guests. I went to a white-glove cotillion. I was forbidden to put any mark of self on my professionally decorated, funk-blue, toile-covered bedroom walls, which were awash with manic farm scenes populated by fat, psychotic-looking peasants. Is it any wonder that some of my judgments were askew?

Nonetheless, wild horses would have been offed trying to drag me from my goal: I would partake in the classic, venerable post-divorce tradition. My resolve was dazzling. By hook or by crook, I was going to drown my sorrows in sex.

Roadblocks: I had a toddler. I was working. I was weary, bloat-eyed, spent. My ex was unavailable for child care (and, evidently, support checks) as he'd found his bliss photographing expat quim on Indonesian beaches. I was hermitlike by nature. A day person. Unschooled in the flip, woozy, hair-tossing, ruttish bravado basic to successful cruising. I had been married my whole adult life.

I asked friends to set me up on blind dates. I reckoned that this was a splendid idea -- my quest would be time-efficient, with ample lead to arrange babysitting. My friends are evolved, artistic, highbrowish -- nicely daft from billions of disco drug-nuked brain cells. They knew my tastes and quirks. How wrong could they be?

Blind date No. 1, described as "hilarious," was a twitchy, sullen K-Car driver who let me know -- right off -- that he loved his car like a dog and, despite that, was sure he made much more money than I. When our food arrived, I said, "Your french fries look great. May I taste one?"

Blind date No. 2 was a hirsute, sweating lawyer who popped two Darvons at the restaurant, swilled scotch and did not eat. He explained that this technique helped his psychic recovery from a suicide attempt, just last month, when he tried to crash his Benz into a school bus.

Blind date No. 3, a self-described "major estates broker," walked into my house and, ignoring me, yanked on my powder room door. "Microscopic! This used to be a closet. How much you get robbed for this place?"

When Blind date No. 4 walked in -- warm, jaunty, funny, with a pop star face, I ... Come to think of it, No. 4 didn't "walk in" my door. I met him at a hillside cafe, an arty, cool one. A waiter was meandering outside, canvassing passersby, intent. When he saw me heading positively for the entrance, he put some contraption to an eye, then ran inside. Through the front window, I could see him jab air with a thumbs up.

No. 4 was standing when I entered. He made an exaggerated "Phew!" gesture. The waiter stood next to him, clapping. I might have realized this was obnoxious if Four had not been so awesomely hot. I smiled like a dog on a ride in the car. The contraption thing was on the table. I guess I stared at it. "Night vision scope," Four said, picking it up. "Forewarned is forearmed." He had a low-class British accent, every JAP's turn-on. My G-string ignited right there.

The waiter poured me a glass of champagne. "You're gorgeous," Four crooned. No man under 80 had said that to me since before my marriage, or maybe ever.

I don't remember much of the dinner badinage, except that we had nothing in common. Four thought Mickey Rourke was a great actor. Oh, "so what," said I to me, steaming into his eyes in a hormone canoe. I do remember him putting his hand up to mine, laughing, "See? I have very small hands. We all know what that corresponds to." He sat back in mock mortification: "I'm terribly self-conscious."

We went dancing afterward. He picked me up, laid me smoothly on the club's stately bar and jumped on top. The man had a superior sense of occasion. My daughter was sleeping at Grandma's. OK, I thought: Let's get this show on the road.

Cut to: Four's grandiose bachelor condo, an incubus of granite and chrome. He had just unhooked my bra with his teeth on his suede bed's scratchy, cheetah-print throw. This impressive feat was eclipsed by my horror less at the décor than at the realization that his undulant hair was a half-wig. One edge curled like a bobbing potato peel, and I had a bird's-eye view. Underneath, his patchy scalp hosted a glue blob.

Transfixed, I was unaware that he had taken my hand and moved it down past his six-pack. He paused, waiting proudly for a response.

I snapped to, inferring what etiquette called for. "Oh. Oh, wow." I said this as if admiring a Lego fort. His dimensions were of note, but my mescal-amped estrus had notched down to a yearning for tea. "Um ... rubber thingys?" I squeaked.

He rose and, preceded by his fleshly confrere, opened a closet. There, in full view, was a large, pawed-at carton with a blue and white generic design. It said: LATEX CONDOMS -- TWO GROSS.

"You buy your condoms by the gross???" I honked.

He shrugged. "I buy everything at Costco."

As for what ensued, let's just say, on the plus side: I was able to further hone my peerless orgasm simulation skills. I waited till Four got a snore on, then scrambled out -- a ghoulish wraith in smeared "Lovin' Plum!" mascara. My damp, mangled, girly-twee "date outfit" felt like an iron lung.

Yet, driving home, I rallied. I had achieved a goal, after all. Plus, I grew from this encounter. I now truly understood the previously perplexing homily "There is no there there." And I made peace with the viscous despair I felt on my eighth birthday, when receipt of a yearned-for Barbie Dreamhouse did not cause me to glow as if lit from within, like the girl in the ad.

Laurian Leggett is a writer in Beverly Hills. She is about to be married.